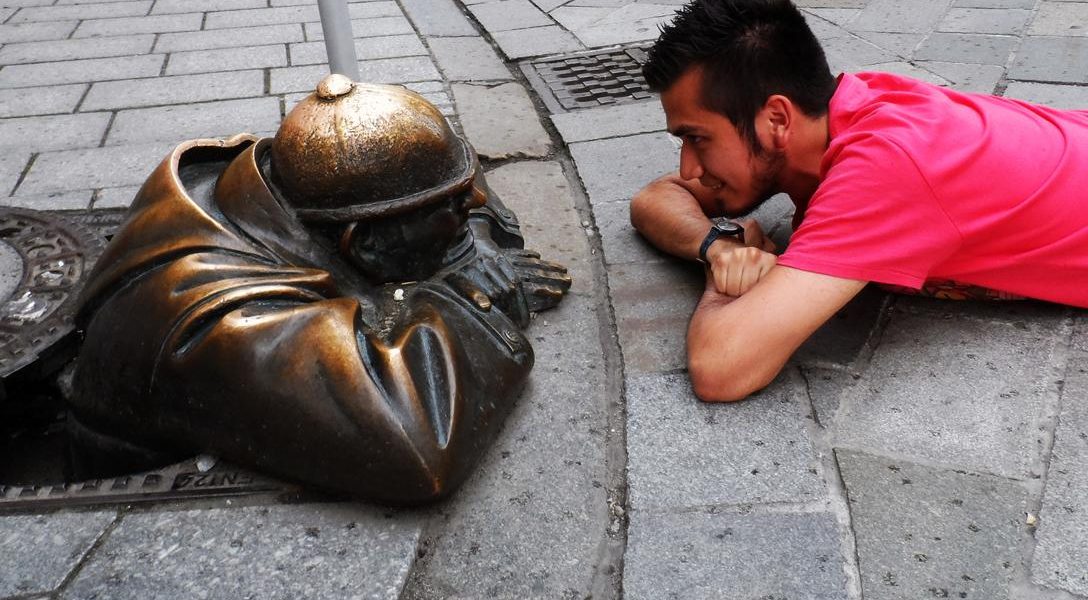 Eye to eye with Cumil "The Watcher," a bronze statue at the corner of Panska and Rybarska Brana streets in Bratislava, Slovakia. Photo Credit: seralowen / Flickr (CC BY 2.0)
Editors' Picks

Why Are Republicans the Only Climate-Science-Denying Party in the World? (Russ)

“On Tuesday, Jeb Bush proposed to eliminate the Obama administration’s regulation of carbon pollution, and, in keeping with his self-styled goal of ‘growth at all cost,’ proposes to make any further climate regulation essentially impossible. In any other democracy in the world, a Jeb Bush would be an isolated loon, operating outside the major parties, perhaps carrying on at conferences with fellow cranks, but having no prospects of seeing his vision carried out in government. But the United States is different. Here in America, ideas like Bush’s fit comfortably within one of the two major political parties. Indeed, the greatest barrier to Bush claiming his party’s nomination is the quite possibly justified sense that he is too sober and moderate to suit the GOP.

“Of all the major conservative parties in the democratic world, the Republican Party stands alone in its denial of the legitimacy of climate science. Indeed, the Republican Party stands alone in its conviction that no national or international response to climate change is needed. To the extent that the party is divided on the issue, the gap separates candidates who openly dismiss climate science as a hoax, and those who, shying away from the political risks of blatant ignorance, instead couch their stance in the alleged impossibility of international action.

“A new paper by Sondre Båtstrand studies the climate-change positions of electoral manifestos for the conservative parties in nine democracies, and finds the GOP truly stands apart. Opposition to any mitigation of greenhouse-gas emissions, he finds, ‘is only the case with the U.S. Republican Party, and hence not representative of conservative parties as a party family.’”

How Many Deaths Did Volkswagen’s Deception Cause in the US? (Russ)

It wasn’t just some trick. Huge amounts of toxins were improperly released, causing incalculable health damage. This one will be a big, big deal for a long time.

As More Nations Step Up to Climate Challenge, It Still Is Too Little Too Late (Russ)

“The pledges that countries are making to battle climate change would still allow the world to heat up by more than 6 degrees Fahrenheit, a new analysis shows, a level that scientists say is likely to produce catastrophes ranging from food shortages to widespread extinctions of plant and animal life.”

“The U.S. Drug Enforcement Administration has allowed its employees to stay on the job despite internal investigations that found they had distributed drugs, lied to the authorities or committed other serious misconduct, newly disclosed records show….

“… Of the 50 employees the DEA’s Board of Professional Conduct recommended be fired following misconduct investigations opened since 2010, only 13 were actually terminated, the records show. And the drug agency was forced to take some of them back after a federal appeals board intervened.

“In one case listed on an internal log, the review board recommended that an employee be fired for “distribution of drugs,” but a human resources official in charge of meting out discipline imposed a 14-day suspension instead. The log shows officials also opted not to fire employees who falsified official records, had an “improper association with a criminal element” or misused government vehicles, sometimes after drinking.”

“The images inside the police cruiser are fuzzy, impossible to discern until a laptop glows and street lights illuminate the dash. A few minutes pass and the officer is on foot, approaching a white sedan. There are flashlights in the darkness, and maybe that’s the light of a shopping center in the distance.

“The half-hour video, which looks like it was shot through a Vaseline-smeared lens, is among hundreds of hours of recordings from body cameras the Seattle Police Department has uploaded to YouTube. Before roughly 800 officers begin using the cameras next year, Seattle police want to know whether posting the videos online is an efficient and affordable way to ensure the public can access them. The videos are ‘redacted’ so that viewers cannot identify the people in them.

“As police departments across the country equip their officers with body cameras, many are struggling to strike a balance between the public’s right to know and privacy protections. This year 10 states — Arizona, Florida, Georgia, Maryland, Nevada, North Dakota, Oklahoma, Oregon, South Carolina and Texas — have passed laws concerning public access to the footage, according to the Reporters Committee for Freedom of the Press, a nonprofit group that assists journalists.”

“Swarms” of refugees, etc. Compares to how we referred to other refugees — including our own relatives.

When it comes to Jeb’s claims about cutting taxes and spending, balancing the budget, and increasing employment … a Florida newspaper finds Jeb only half right.

Man Arrested After Shooting Himself in His “Privates,” and Falsely Blaming “Black Guy” (Russ)

It is not known if he was working for the Trump campaign.

How do you say “NOW they get a bright idea” in Japanese?