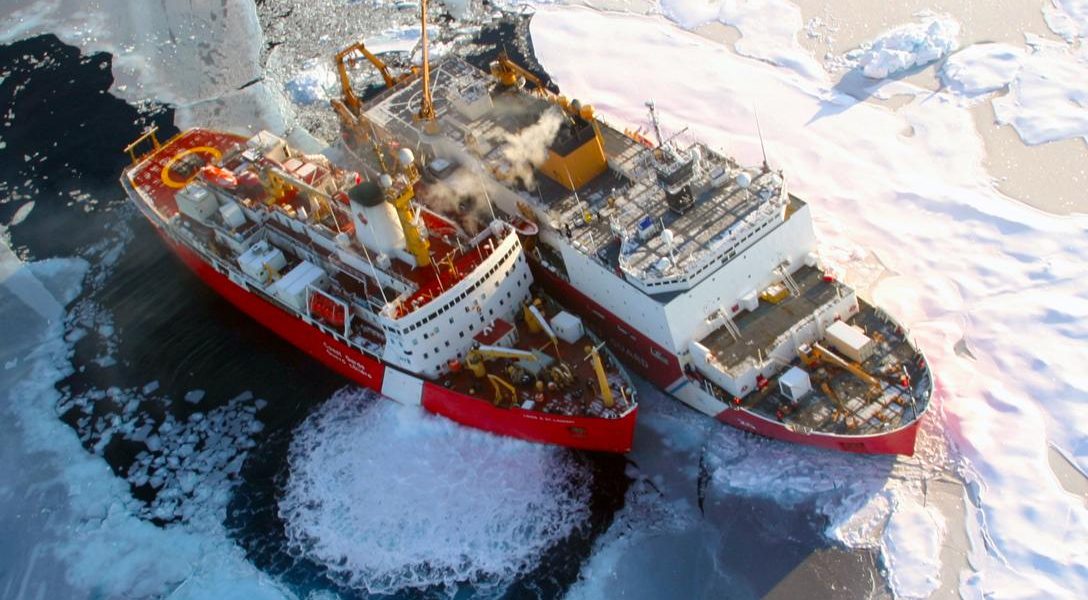 Helicopter view of Canadian Coast Guard Ship Louis S. St. Laurent (left) and US Coast Guard Cutter Healy (right) on the Arctic Ocean. The ships are coming together because the crews are planning to meet and learn the operations of the other ship. This was during a scientific expedition to map the Arctic seafloor. In the news: Is Russia winning the race for Arctic oil by exploiting the ice breaker gap. Photo Credit: Jessica K. Robertson / U.S. Geological Survey
Editors' Picks

The Asahi Shimbun reports that authorities in the small city of Nikko in Japan’s Tochigi Prefecture, some 110 miles away from the Fukushima nuclear power plant, have said that at least 334 bags containing radioactive soil have been swept into a tributary of the Kinugawa river.

Immediately after the tropical storm hit Japan, media reported that 82 bags had been washed away by the floods. At the same time, the storm also caused the contaminated water kept in specially designed tanks to overflow and spill into the sea.

Two years ago, a small group of al Shabab fighters stormed into Kenya’s Westgate Mall, kicking off an hours-long killing spree at the upscale Nairobi shopping center that would claim at least 67 lives. Here are surprising new details, including how most of the effort to stop the massacre were carried out by individuals and lone police, not government security forces.

In New York City, the poverty rate is… 20 percent, even while all those bankers eat filet mignon every night.

Last month, Turing Pharmaceuticals acquired the drug Daraprim, a potentially life-saving medication that has been around for 62 years. The pharmaceutical startup then proceeded to immediately raise the price by more than 5,000 percent.

With the price tag of a tablet jumping from $13.50 to $750, the daily use of the drug could now end up costing hundreds of thousands of dollars per year. The company defended its price-gouging by saying it is investing in a better version of Daraprim, but experts say that is not necessary.

“This is not an infection where we have been looking for more effective drugs,” Wendy Armstrong, the vice chair of the HIV Medicine Association, told Infectious Disease News, which first wrote about the price increase. “It is a single pill — once a day — that has minimal side effects and, while it can lead to low blood counts, that effect is very well-mitigated simply by the coadministration of a vitamin.”

Why Americans Won’t Do More About Growing Inequality (Russ)

They’re very troubled by it, but political passivity may be related to some sense that “the world is fair” anyway: “All this research testifies to the particular, historical resistance of Americans to spending money on the have-nots, whom they commonly assume are undeserving of such help. This remains the case even though Americans know inequality is on the rise: two-thirds of respondents to a 2013 survey said they thought the gap between rich and poor had increased in the previous five years.”

So says the head of that country’s largest private sector union.

“It may sound kind of sentimental to want your robotic arm to feel touch, but quality of patient life aside, it’s actually very important to the functionality of the limb. One of the biggest difficulties in creating a successful robotic limb is making sure it can actually grasp and move objects as needed, which is difficult to do when the user can’t sense that they’re touching an object, or how hard they’re squeezing it.”

A study showing that nearly all mammals take the same amount of time to urinate has been awarded one of the 2015 Ig Nobel prizes at Harvard University. These spoof Nobels for “improbable research” are in their 25th year. The team behind the urination research, from Georgia Tech, won the physics Ig. Using high-speed video analysis, they modelled the fluid dynamics involved in urination and discovered that all mammals weighing more than 3 kg empty their bladders over about 21 seconds.