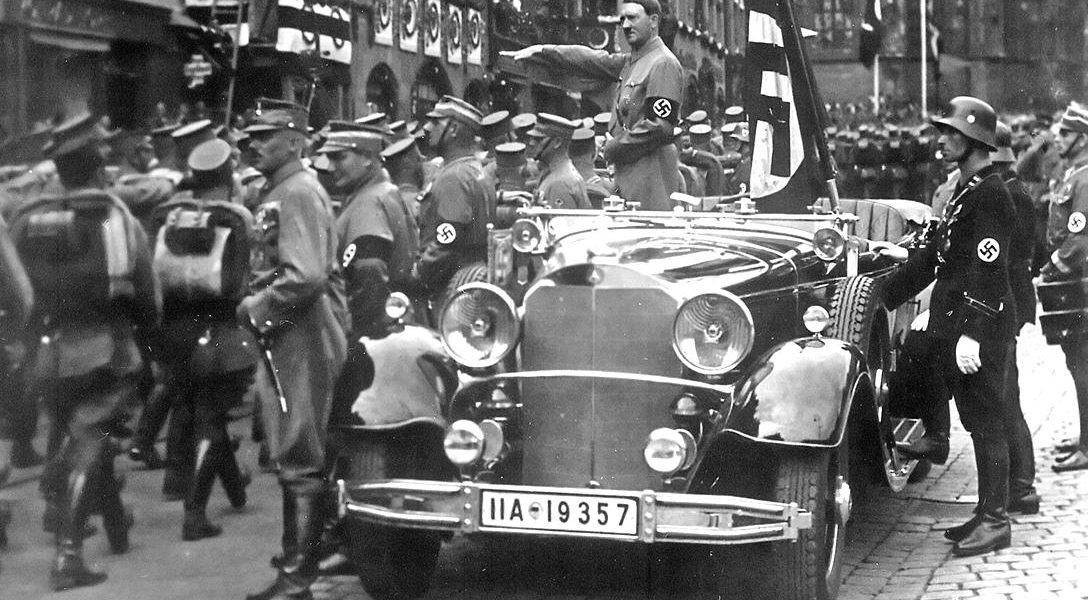 Adolf Hitler in Nuremberg during the week of the annual Nuremberg Rally of the Nazi Party. The Nuremberg Laws were introduced on September 15, 1935 at the rally. Photo Credit: Charles Russell Collection, NARA.  / Wikimedia
Editors' Picks

Football on the Corporate Campus: The NCAA is no exception in the world of big-money higher education (Russ)

Writes Robert L. Kehoe III: “The ascent of the college athletics business has occurred at a time when higher education is increasingly viewed as little more than a means to enhance social and economic status. While elite sports programs (particularly football and men’s basketball) have created a professional culture of athletic specialization and promotion, universities such as Stanford and MIT have followed a similar trend in academic research, funneling talent and patent licenses into corporations in exchange for ample short and long-term rewards. All of this speaks to a reconfiguration of the university as an engine for the production of profits rather than a safe harbor in which to think and to learn both skills and the ethos of democratic participation.”

Can a long-gone French philosopher get a dead-eye bead on the Trump phenomenon? You bet. (Gerry)

Speaking of Trump — his name has become synonymous with his stance on immigration. We wonder what his thoughts are on the consequences of the Mexican border fence. The 620 miles of impenetrable barrier constructed along the Mexico–United States border, aimed at stemming illegal human immigration, is also hampering the movements of animals, including several endangered species.

When Republican presidential candidate Ben Carson visited California last week, he said that there is no conclusive evidence that humans are causing climate change. In response, he got some mail from the drought-stricken state.

Governor Jerry Brown sent a letter and a hard drive to Carson. The hard drive contained the United Nations’ climate change report, while the letter contained some scathing language.

“Climate change is much bigger than partisan politics,” Brown told Carson and asked the retired neurosurgeon to use his “considerable intelligence to review this material.”

A Wave of Discontent Is Heading Toward Washington (Klaus)

A new ABC News/Washington Post poll shows that voters are deeply distrustful of politicians and believe that the current political system is dysfunctional.

A whopping 72 percent feel that people in politics can’t be trusted and nearly half of them (48 percent) said they “strongly” feel that way. Republicans in particular want to see an outsider fix the nation’s problems and that is reflected in the latest GOP presidential poll, which has non-politicians Donald Trump (33 percent) and Ben Carson (20 percent) leading the pack by a wide margin. As the first insider, Jeb Bush comes in third at 8 percent.

Overall, 64 percent of voters think the current system is not functional but they prefer it to be patched up (76 percent) instead of tearing it down and starting over (21 percent).

Blase Bonpane, a prominent, activist ex-priest, takes a close look at what the Pope has to say, focusing in part on the role of “liberation theology” and on criticism of the Pontiff. Among other things, he says (this is a transcript from a podcast): “Every idea that is new in church and state, it seems, has been condemned. In the 13th century, Thomas Aquinas wrote a definitive book on theology using Aristotle as a model for logic, and it became a forbidden book because the author was an infidel.” Much more at the link.

Closing the Door on a Painful Chapter in the History of our Kin . . . and Opening the Door to New Discoveries — and Maybe New Rights (Susan)

“A Disgraceful Era in Our Treatment of Chimps Ended Today,” reads a headline in TheDodo.com, which trumpets the news that, as of Monday, September 14, 2015, “all chimpanzees are now protected as ‘endangered species’ — bringing an end to the most shameful era of normalized exploitation and abuse against these animals.”

This US Fish & Wildlife Service ruling, published in the Federal Register on June 16, 2015, goes into effect at a fortuitous time: Just five days ago, the International Business Times featured the headline, “Homo naledi: New ‘Star Man’ human ancestor discovered in South Africa cave,” which describes the work of an international team of scientists whose discovery is written up in the October issue of National Geographic magazine and in a new article in the scientific journal eLife.

At the same time that a new branch is being added to the human family and new protections are being given in the US to chimpanzees, a new organization called the Nonhuman Rights Project, founded by long-time animal protection attorney Steven M. Wise, is attempting to change the legal status of certain species of self-aware, autonomous nonhumans, including chimpanzees, from “things” to “persons.” Wise explains the mission of NhRP in this TED talk.

The name of the cave where the fossils of the newly dubbed Homo naledi species may portend success for the four chimpanzees whose freedom from captivity Wise’s group is currently fighting for in the New York State courts: Rising Star.