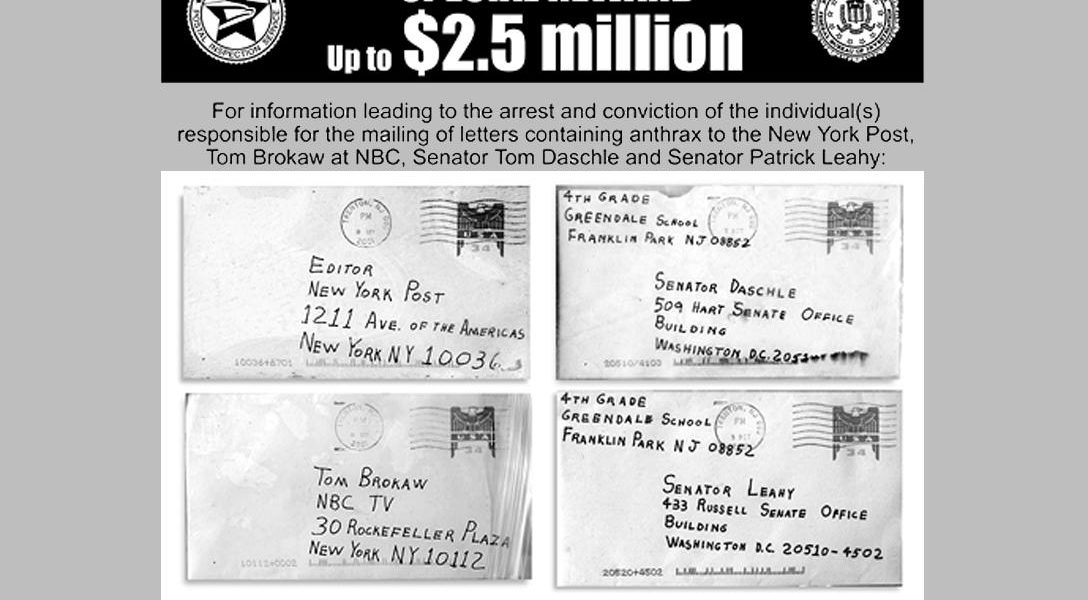 A reward offer totalling $2.5 million was offered by the FBI, US Postal Service and ADVO, Inc. in 2001. Three weeks after the first mailing of letters containing anthrax, two more letters were mailed from Trenton, NJ, postmarked October 9, 2001. These letters were addressed to Senator Tom Daschle of South Dakota and Senator Patrick Leahy of Vermont. Photo Credit: FBI / Wikimedia
Editors' Picks

DNA testing is the “gold standard” of forensic science. Except when it’s misinterpreted.

Among other things, suggests people shouldn’t even have basis to criticize agreement, apparently, because it is still “secret.” (Not really, thanks to leaks) Also, paper finds lots of reasons different people’s criticism is “parochial” or somehow self-serving. Textbook case of establishment media subtly shaping opinion.

Committee to Protect Journalists has compiled their annual Global Impunity Index which “spotlights countries where journalists are slain and the killers go free.”

Half of US Blacks Know Somebody Killed With a Gun (Klaus)

At least 47 percent of blacks in the United States personally know somebody who was killed by another person with a gun. That includes 19 percent who said they had a family member who died in that way. The actual overall percentage is likely higher because another 16 percent said they were unsure or preferred not to answer the question. Among whites, “only” 18 percent said they knew somebody who was killed by another person using a gun.

“I think the likelihood of Hitler being able to accomplish his goals would have been greatly diminished if the people had been armed,” Carson said.

Declassified US Docs Reveal Pinochet Ordered Killing in US (Trevin)

“Newly declassified US intelligence documents that came to light Thursday reveal that Gen. Augusto Pinochet directly ordered the 1976 assassination of a Chilean diplomat in Washington.”

Speaking of Ben Carson, here’s a class for everyone who wants to survive the presidential election.