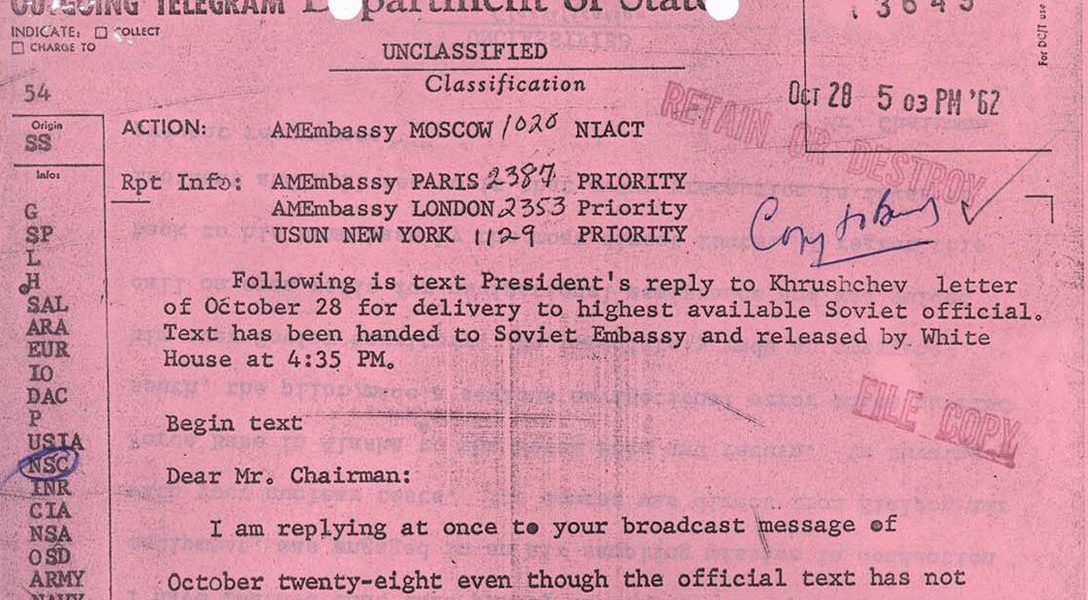 The Cuban Missile Crisis was concluded on October 28, 1962. On October 27, the Kennedy administration reportedly agreed to remove all missiles from southern Italy and in Turkey, in exchange for Khrushchev removing all missiles from Cuba. On October 28, a statement from Khrushchev was released. Khrushchev stated that, "the Soviet government, in addition to previously issued instructions on the cessation of further work at the building sites for the weapons, has issued a new order on the dismantling of the weapons which you describe as 'offensive' and their crating and return to the Soviet Union." Kennedy sent this telegram to Khrushchev acknowledging the statement and soon after issued a statement calling the letter "an important and constructive contribution to peace." Read more at the JFK Library. Photo Credit: ARCHIVE.GOV
Editors' Picks

Typical Bush family behavior to unleash a disaster, then blame others

After the Ecuadorian Supreme Court ruled that Chevron had to pay $9.5 billion in damages to rainforest villagers for contaminating their land, the oil giant countersued in the US and got a favorable judgement, which said the plaintiff’s lawyers acted fraudulently in that case. A key reason for that verdict was the testimony of Ecuadorean judge Alberto Guerra who said the lawyers for the villagers paid him off. However, it came to light this week that Guerra has now admitted to lying about this.

Elevated levels of CO2 damage your cognition. No wonder you can’t think straight about Climate!

This guy presumably kept us all safe by getting so many firearms off the streets.

Ben Carson Threatened His Mother with a Hammer (Trevin)

In response to Donald Trump’s jokes about his lack of energy, Carson told NBC’s Meet the Press on Sunday that as a teen he “would go after people with rocks, and bricks, and baseball bats, and hammers.” Talk about a double-standard. Imagine what the GOP would have done to Obama had he admitted to such a violent past?

“Jimmy Morales, a former TV comedian who has never held office, swept to power in Guatemala’s presidential election on Sunday after milking public anger over a corruption scandal that deepened distrust of the country’s political establishment.”

President Obama called it a “tolerant Muslim democracy,” but according to the Asia Advocacy Director of Human Rights Watch, John Sifton, Indonesia is “losing some of its tolerant qualities and principles, and starting to give too much power to Sunni extremist groups, which want to basically make Indonesia a place that’s unfriendly to Shia, to Christians, to Baha’i, to secularists and to women.”

Host country Malaysia decided those attending might actually want to try it.

Incredible footage taken from a drone on the Slovenian-Croatian border helps us visualize the scale of the crisis. A long line of refugees snake through agricultural land. The comments accompanying this Guardian video show the fear and hostility some people have of the mass migration.