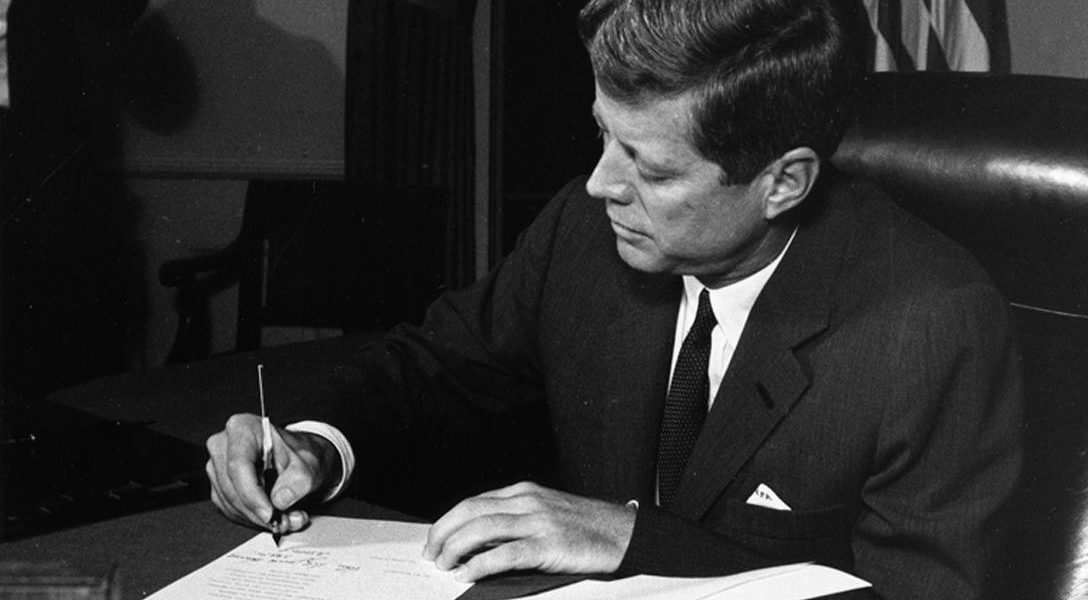 President Kennedy signed the Proclamation for Interdiction of the Delivery of Offensive Weapons to Cuba on October 23, 1962. The night before, on October 22, he delivered an address to the nation via television on "Soviet military buildup on the island of Cuba."  Photo Credit: Photograph by Cecil Stoughton, White House, in the John F. Kennedy Presidential Library and Museum, Boston.
Editors' Picks

The pope, a rabbi, an imam and the Dalai Lama were in a rowboat together. Noticing that the water was getting higher, the Dalai Lama said…. But, folks, climate change is unfortunately no joke. Here’s the Tibetan spiritual leader’s video statement on the subject.

New York City police commissioner William Bratton won’t reveal anything about them unless compelled by a judge: “It falls into the range of security and counter-terrorism activity that we engage in.”

Australia is developing a new system that would allow facial biometric matching and the database could include photos mined from social media sites.

Senate Minority Leader Harry Reid called on House Republicans to reimburse the American taxpayers for the funds they wasted on their Benghazi committee. The Nevada Democrat suggested in a letter to the Republican National Committee that this is only fair because the “so-called committee is clearly a Republican political organization.”

James Bond is Back, and He’s Pro-Snowden (Trevin)

According to The Guardian, the new Bond takes “a stoutly pro-Snowden line against the creepy voyeur surveillance that undermines the rights of a free individual.”

What did Bond-creator Ian Fleming really think about leaks and eavesdropping? Here are some CIA files on Fleming’s connection with Allen Dulles — including a Redbook magazine dialogue where they interview each other about these topics and more, including female spies, JFK and the Official Secrets Act.

Administrative subpoenas, which do not require judicial approval, are used each year to access the medical records of thousands of Americans. These subpoenas allow the Department of Justice to circumvent safeguards put in place by the Health Insurance Portability and Accountability Act (HIPAA).

Billionaire Carl Icahn, a supporter of Donald Trump, has pledged to put up $150 million to fund a super PAC that aims hold Congress accountable for not preventing the “exodus” of companies from the US.