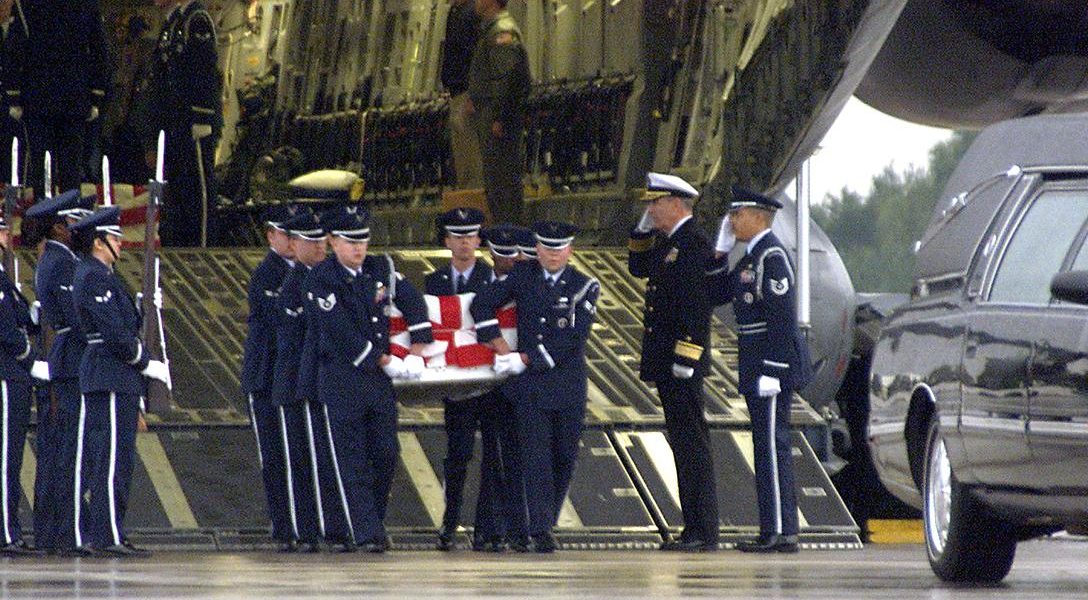 The USS Cole was attacked on October 12, 2000. The US Navy guided-missile destroyer was in harbor and being refueled in the Yemeni port of Aden. Al-Qaeda claimed responsibility for the attack. Seventeen American sailors were killed, and 39 were injured. About this photo: A US Air Force honor guard carries the remains of a sailor killed in the attack on the USS Cole from a C-17 Globemaster III at Ramstein Air Base, Germany, on Oct. 13, 2000. Photo Credit: Tech. Sgt. Jerry King / U.S. Air Force / Wikimedia
Editors' Picks

One hundred million people a year are infected by the disease, also known as Breakbone Fever, substantially harming lives and impeding economic and social development. Heat is not the only cause, but researchers now think rising temperatures are a key factor.

Charles Koch, the man who is spending hundreds of millions of dollars to get like-minded conservatives elected to public office, said in a rare interview that he is doing so to fight special interests. Even more remarkable is that he managed to make that statement with a straight face.

New “smart drugs” will be up soon for FDA approval. Are they a healthcare breakthrough, or just more surveillance?

Zillionaire Romney backer lost to small magazine in court, but cost them $2.5 million in legal fees. So who wins?

Jeb Mixes Up His Campaign and Supposedly Independent PAC (Russ)

In an interview with Iowa Public Radio, Jeb Bush mixed up the two supposedly completely separate entities: “You build on your success. We just started to advertise — actually the Right to Rise PAC started to advertise, not our campaign.” The only reason these PACs are allowed to exist — and to collect unlimited sums, unlike official political campaign organizations, is because they claim to operate on an entirely independent basis. Jeb’s slip-up pretty much shows what a sham the whole thing is.

Despite Announcement to the Contrary, the Price of Daraprim is Still $750 Per Pill (Trevin)

Turing Pharmaceuticals CEO Martin Shkreli has instead “hired an army of new Washington lobbyists and lawyers to stem the massive fallout from his actions and to stymie congressional oversight.”

Shkreli has taken to Twitter to lash out at Bernie Sanders, who released a statement critical of the company’s increase of the AIDS/cancer drug by 5000 percent:

Inglis, Florida: Home to the 1,000th US Mass Shooting Since Sandy Hook (Trevin)

The horror “has become so mundane, so everyday, that it no longer makes national news.”

“An examination of the details, though, reveals mass shooting number 1,000 to be, like all the others, a human cataclysm. Broken hearts and bullets, an affair in which the roles of victim and perpetrator flip in an instant.”

It may be really soft, and it may be organic cotton, but the ink is the problem. The manufacturing process is toxic, and so are residues when the articles get to the consumer.

It may sound obvious, but now a study shows stunning success with making kids better set for life and altogether happier and better-adjusted when their parents are given more money. The extra funds are tiny compared to the costs society and individuals later incur for poverty. Those who begrudge others modest welfare payments should especially read this.