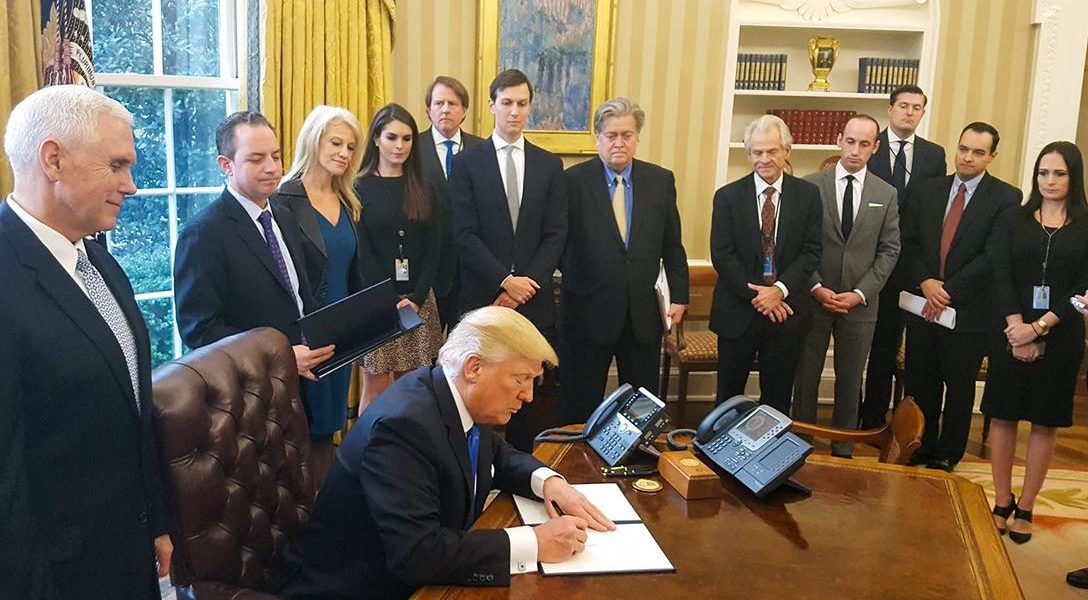 West Wing Defense: A growing list of White House staffers are being swept up in Special counsel Robert Mueller's investigation. A legal defense fund is reportedly being set up to pay for their defense. About this photo: President Trump and his staff in the oval office, January 24, 2017. Photo credit: The White House
Editors' Picks

The National Interest writes that President Truman “never made an actual decision to use the bomb, and it was the one decision made by Emperor Hirohito of Japan to accept Allied surrender terms” that actually ended the war and spared the lives of many young soldiers and Marines training for an amphibious invasion.

Immigration Debate in a Nutshell – on a Beach (Reader Steve)

People gather near a small, but mighty, tin wall on a beach. Loved ones can meet but not touch. If they someone crosses the border, their immigration status could come into peril. This is Tijuana. And it could be the model of what border towns will look like in the near future under Trump.

July marked the year anniversary of Turkey’s coup. Now the surviving Erdogan government is bringing nearly 500 people to stand trial. The cases bring to light many lingering questions about the coup: who organized it ; was their outside involvement ; should US extradite possible organizer Fethullah Gullen?

State media reports that the Chinese government is developing a plan to phase out all gas and diesel based cars with the goal of replacing them with electric technology. China would join France and Britain, who have both agreed to end sales of petrol and diesel vehicles by 2040.

Investigations into the 2012 Benghazi attack became quickly politicized by the GOP to attack the Obama administration and defame Hillary Clinton’s then burgeoning presidential campaign. Without all the background noise the case continues with little attention. And now some rather shadowy government tricks have emerged.