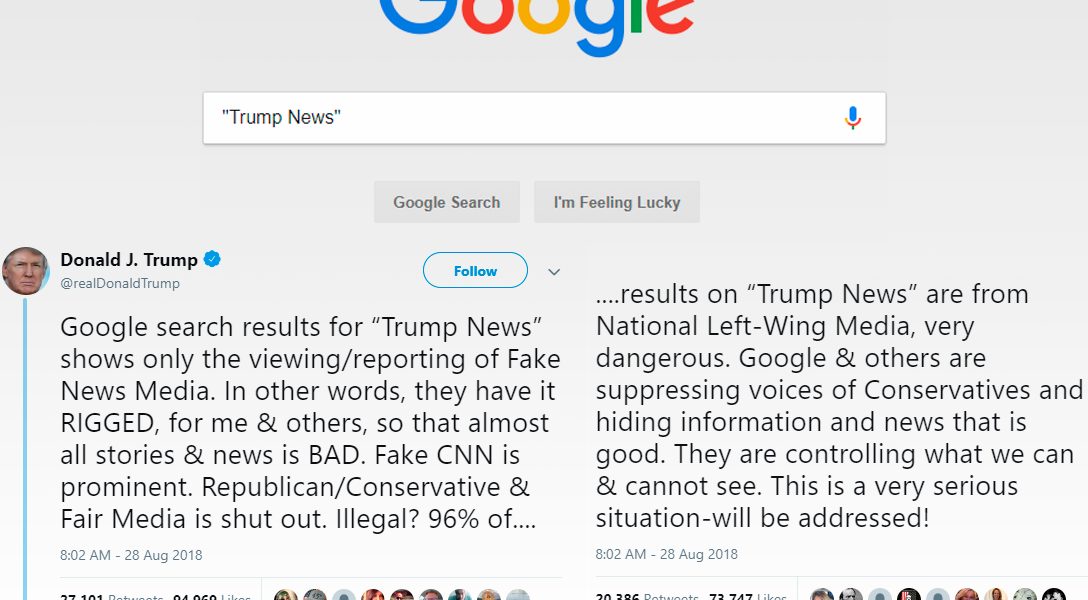 President Trump and other conservatives are accusing social media platforms of not giving their ideas the visibility they deserve. Court decisions including Citizens United v. FEC have declared that the government cannot compel corporate speech and that algorithms are tools used to express corporate speech. Photo credit: Adapted by WhoWhatWhy from Donald J. Trump / Twitter and Google.
Editors' Picks

The author writes, “The United States threatened Monday to arrest and sanction judges and other officials of the International Criminal Court if it moves to charge any American who served in Afghanistan with war crimes. White House National Security Advisor John Bolton called the Hague-based rights body ‘unaccountable’ and ‘outright dangerous’ to the United States, Israel, and other allies, and said any probe of US service members would be ‘an utterly unfounded, unjustifiable investigation.’”

The author writes, “Senate Democrats just gave a huge gift to President Donald Trump: They agreed to expedite votes on 15 of his nominees to lifetime federal court seats because they wanted to go home.”

Saudi Man Arrested for Having Breakfast With Woman (Jimmy)

The author writes, “Saudi authorities have arrested an Arab man who appeared in video having breakfast with a female work colleague. The Ministry of Labor and Social Development said the man was arrested for appearing in an ‘offensive video’ and cited violations of rules including those ‘regulating women’s placement at work.’”

Moscow Has Upped the Ante in Syria (Reader Luke)

From Consortium News: “As Syrian forces backed by Russia launch the final showdown in Syria against jihadist extremists in Idlib province, the potential for a US-Russia confrontation has never been greater, as VIPS warns in this memo to the president.”

A Dutch security expert with ties to Wikileaks has gone missing. Cue the conspiracy theories.