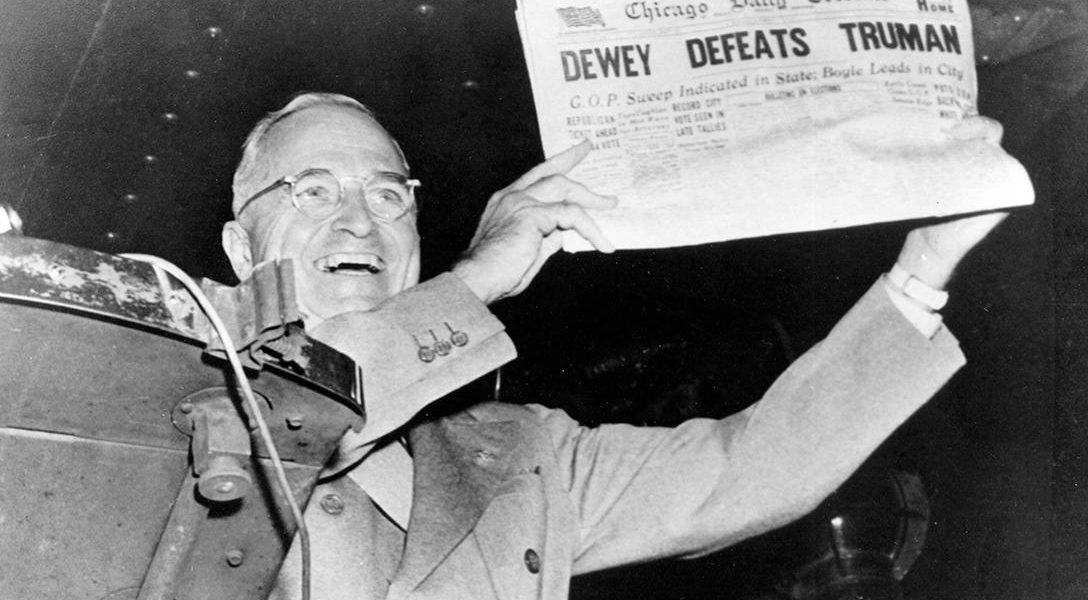 On this Day: The Chicago Daily Tribune published the famous front page headline "Dewey Defeats Truman" on November 3, 1948. Before Comey’s October Surprise, it did not look like 2016 could be a “Dewey Defeats Truman” type of election. About this photo: President Truman holding the Chicago Daily Tribune, telling the press, "That ain't the way I heard it!" Photo credit: Dave Winer / Flickr (CC BY-SA 2.0)
Editors' Picks

This article points out the dangers of the proposed AT&T/Time-Warner merger. Is Too-Big-to-Fail alive and well?

In this weird video and improbable alliance, the hacker collective accused Russia of seeking to influence the US election and help Donald Trump. It’s all so confusing. Is Anonymous now part of the NSA?

What Other Cases Should FBI Director Comey Disclose? (Jimmy)

Directory Comey disclosed the results of the Clinton email investigation because it was a “case of intense public interest”. How about FBI investigations into CIA torture, or the ’08 financial crisis?

Police Spy on Journalist Not Connected to Any Case (Dan)

Montreal police secretly surveilled a journalist who they believed was leaking information about a case involving corruption within their ranks. The only problem? The leaks were coming from a competing newspaper and the journalist was not connected to the case.

Four villages were targeted, all considered Islamic State strongholds. So much for “the enemy of mine enemy is my friend…”

Cigarette Smoking Caused 29% of All Cancer Deaths in 2014 (Milicent)

And not just lung cancer, according to a new study. The proportion varied greatly, depending on geography. It was highest in Southern states: almost 40% of cancer deaths in men, and over 26% in women.