One More “Flashpoint” in the Los Angeles Homelessness Crisis

On the morning of March 24, local activists and unhoused residents gathered at Echo Park Lake in Los Angeles to oppose city councilmember Mitch O’Farrell’s looming eviction of the homeless people living around the lake. People had lived in the park for years, but during the pandemic, the number rapidly grew to around 200 residents, who built communal infrastructure like showers and gardens in efforts to make Echo Park Lake a self-sustaining encampment.

With signs and banners in hand, protesters marched the few blocks to O’Farrell’s office in hopes of garnering media attention and pressuring the councilmember to call off the sweep. Meanwhile, in speeches given as the first light of day shone off the lake, park residents outlined their progress as a self-sustaining collective, as well as their grievances against what they saw as the city’s campaign of harassment. 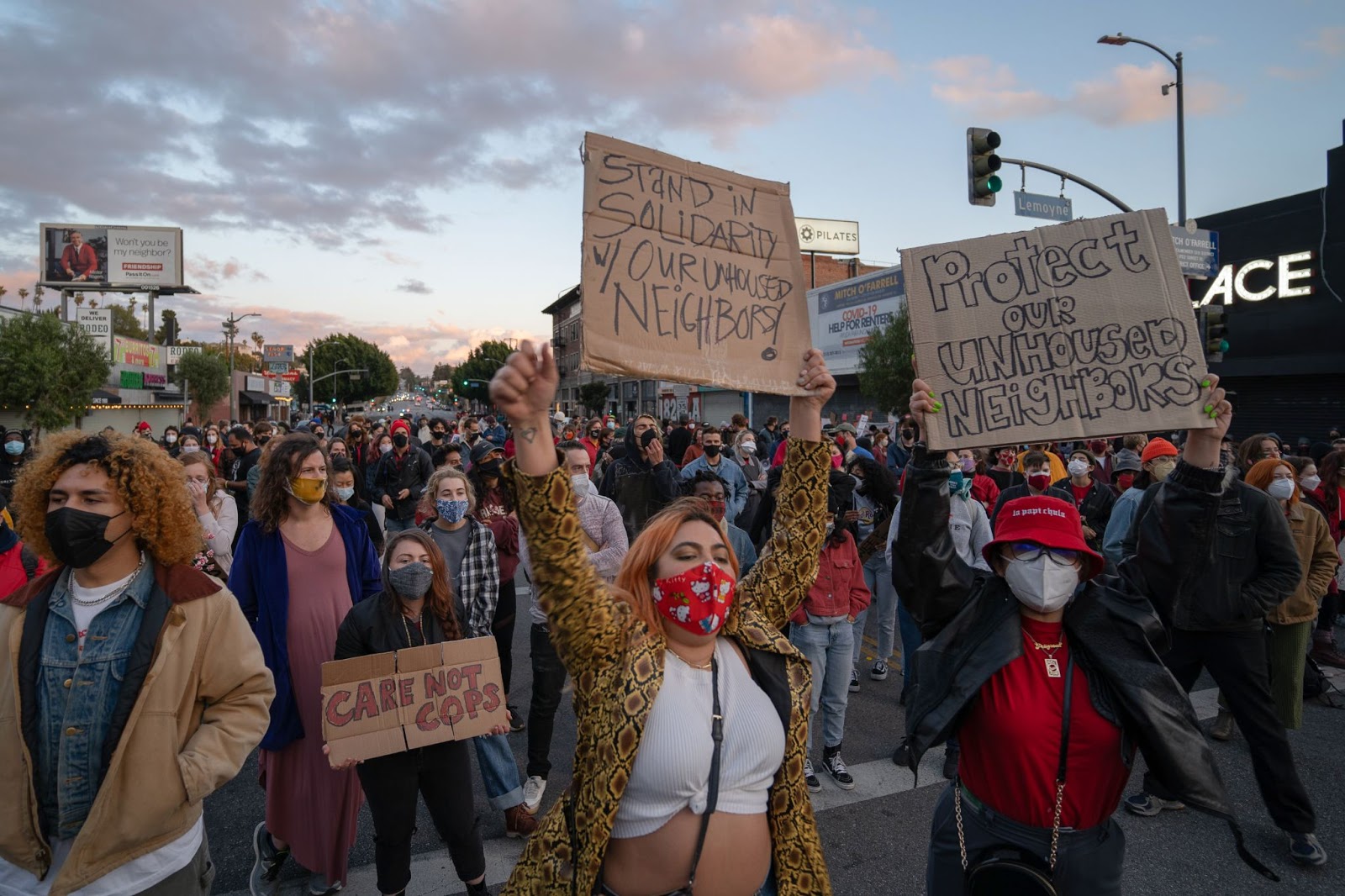 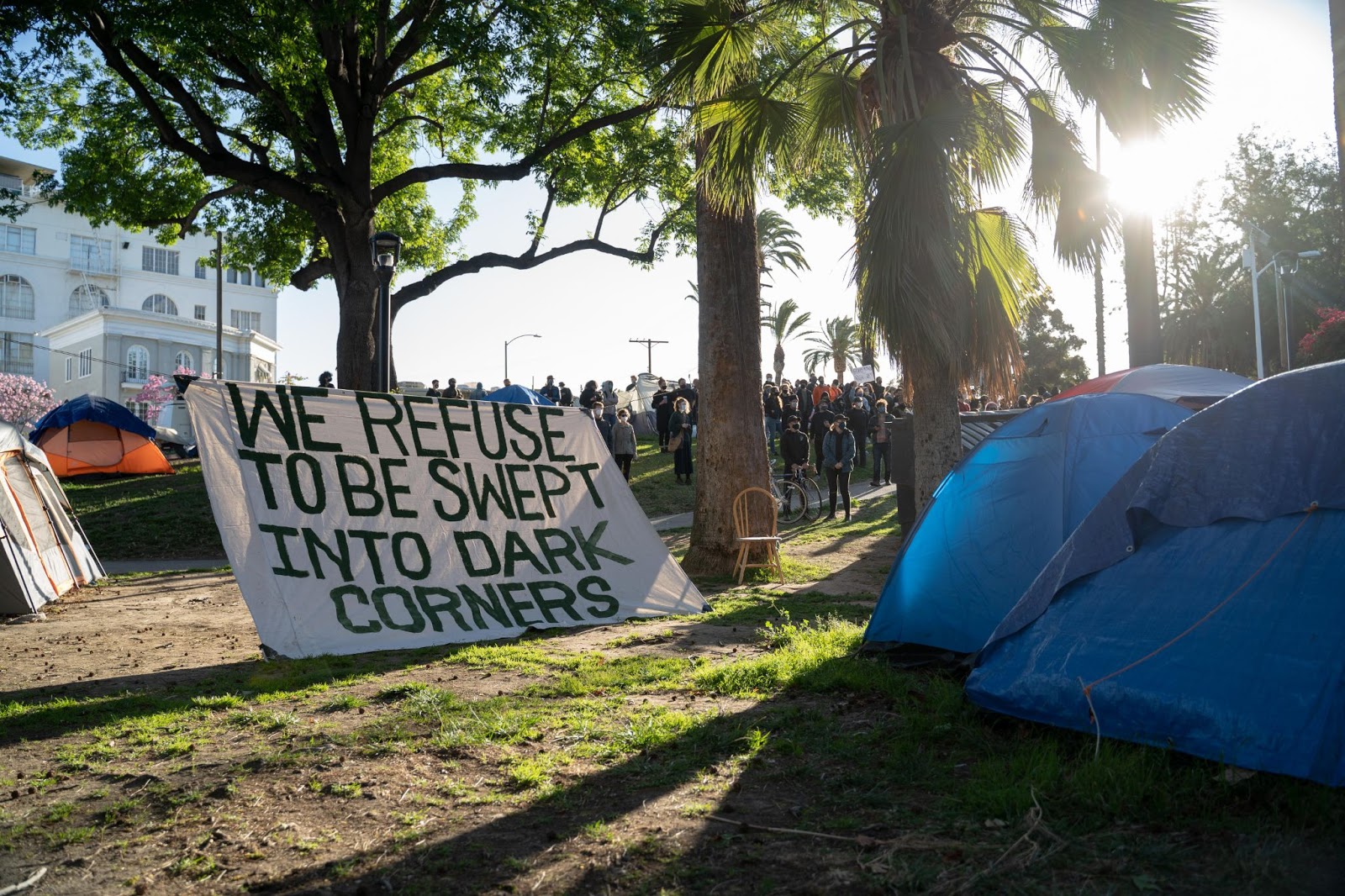 A banner in Echo Park Lake that reads, “We Refuse to be Swept into Dark Corners.” Photo credit: Jeremy Lindenfeld / WhoWhatWhy

In a city with more than 65,000 homeless residents, Echo Park Lake became a flashpoint of the crisis. For the protestors, it was emblematic of the city’s antagonistic attitudes towards homeless people during the pandemic; for the housed residents living near the park, meanwhile, it was emblematic of the city’s inability to address that crisis at all. They cited the park’s inaccessibility and danger as the encampment grew. In response to those complaints, O’Farrell’s office announced that the park would be closing for $500,000 worth of unspecified renovations, which necessitated the expulsion of the park’s homeless community. Advocates for the unhoused decried O’Farrell’s decision and urged city officials to provide the Echo Park Lake community with permanent housing.

Before March’s Echo Park Lake displacement, O’Farrell had worked to provide housing alternatives to the park’s houseless. Starting in December, the council member’s office contracted Urban Alchemy, a non-profit focused on bringing “a sense of peace and respect to America’s most chaotic urban areas,” to begin outreach in the park. O’Farrell’s office also worked with Project Roomkey to secure temporary housing for some of the park’s residents. And though those efforts were successful in providing more than 120 residents with transitional housing by March 24, activists continued to insist that temporary housing did not address the root causes of homelessness and subjected the homeless residents to what activists saw as oppressive policies, like curfews. 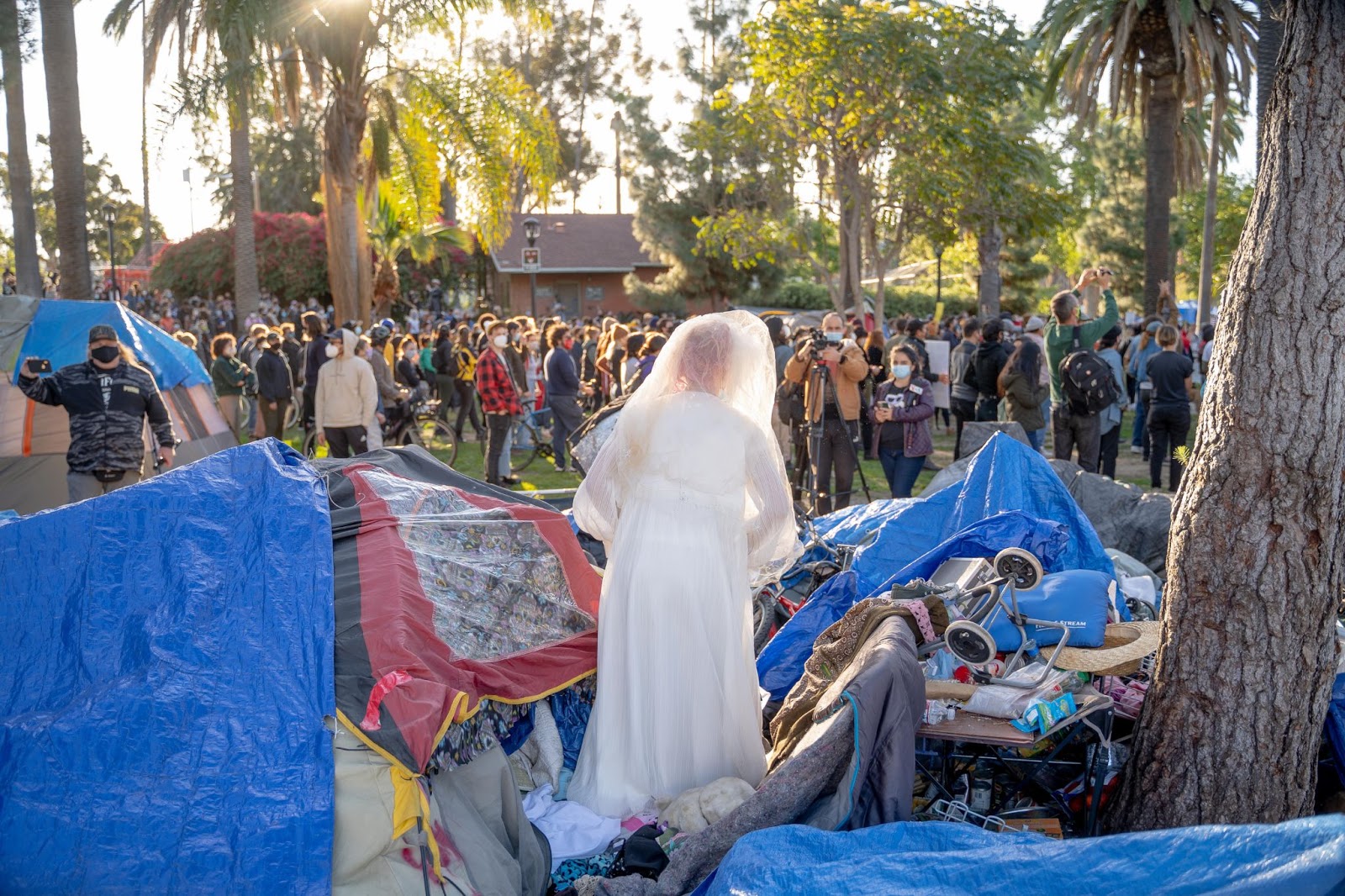 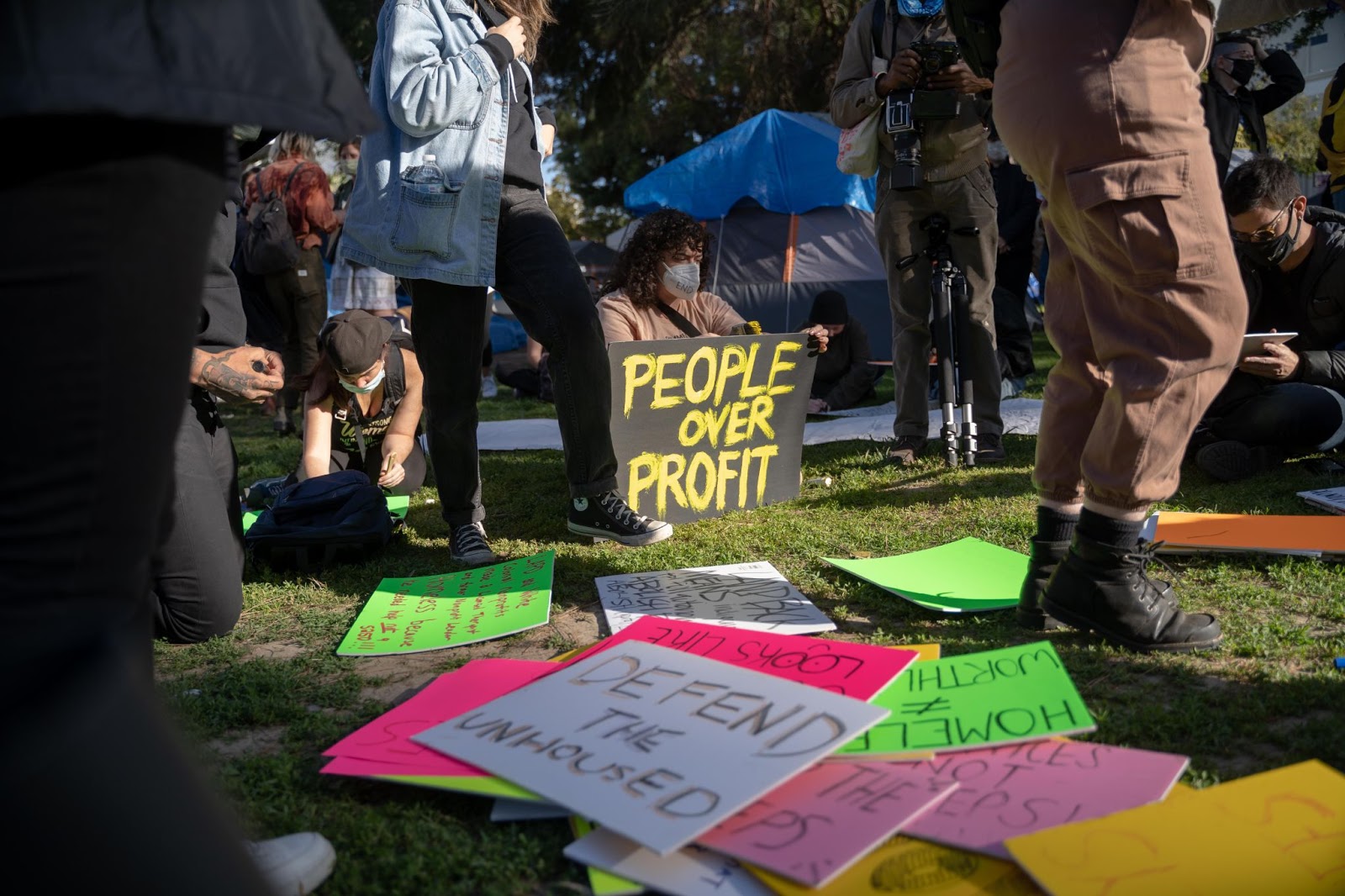 On the evening of March 24, protesters regrouped at Echo Park Lake in attempts to block the Los Angeles police from fencing off the perimeter of the park. Activists remained peaceful as more than 400 officers equipped with riot gear shone flashlights at media attempting to document the events, began surrounding protesters, and physically assaulted attendees, resulting in multiple injuries, including broken bones. By the end of the night, the LAPD had successfully fenced off the park, detaining at least two unhoused residents who had chosen to remain inside. 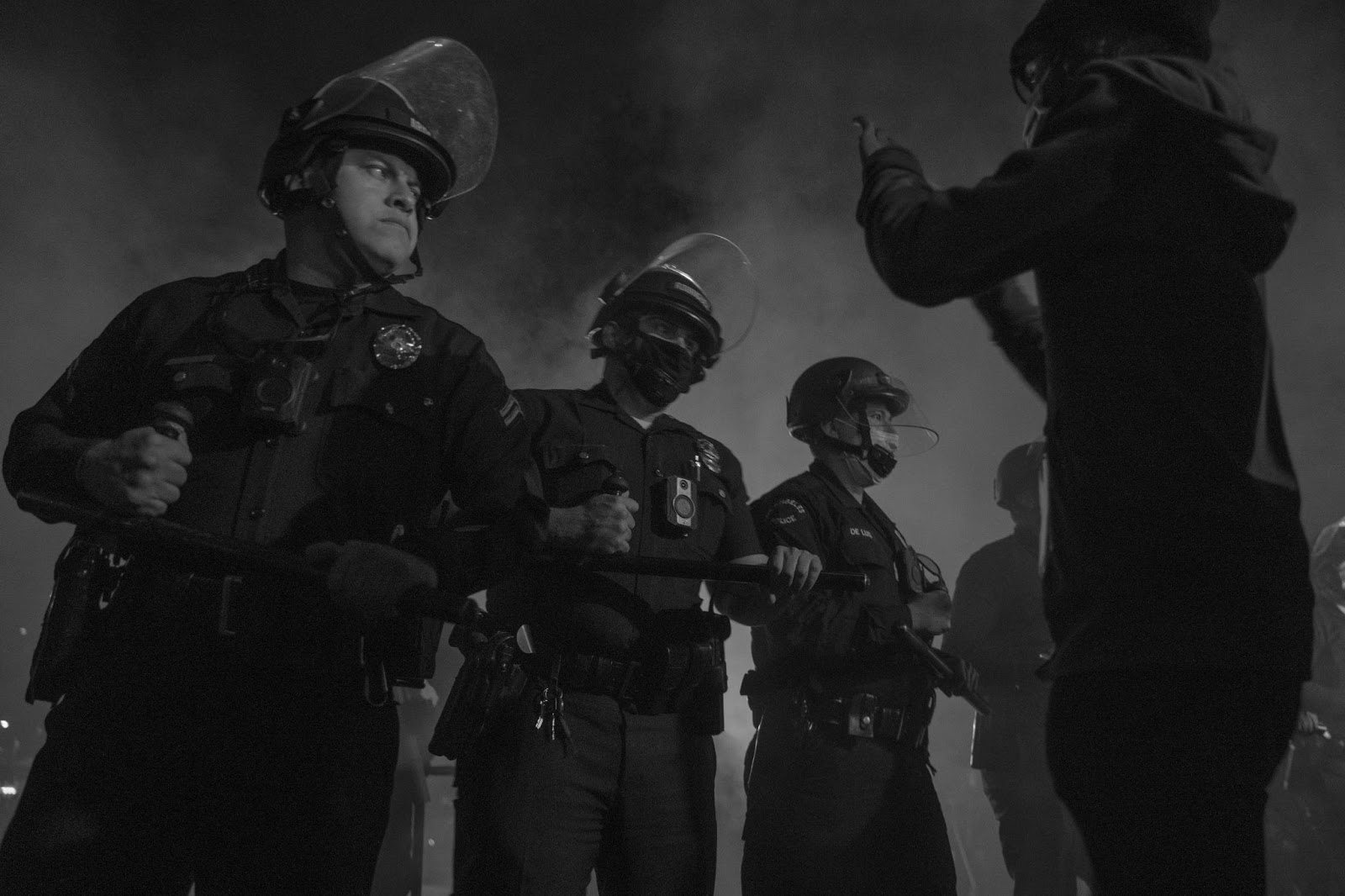 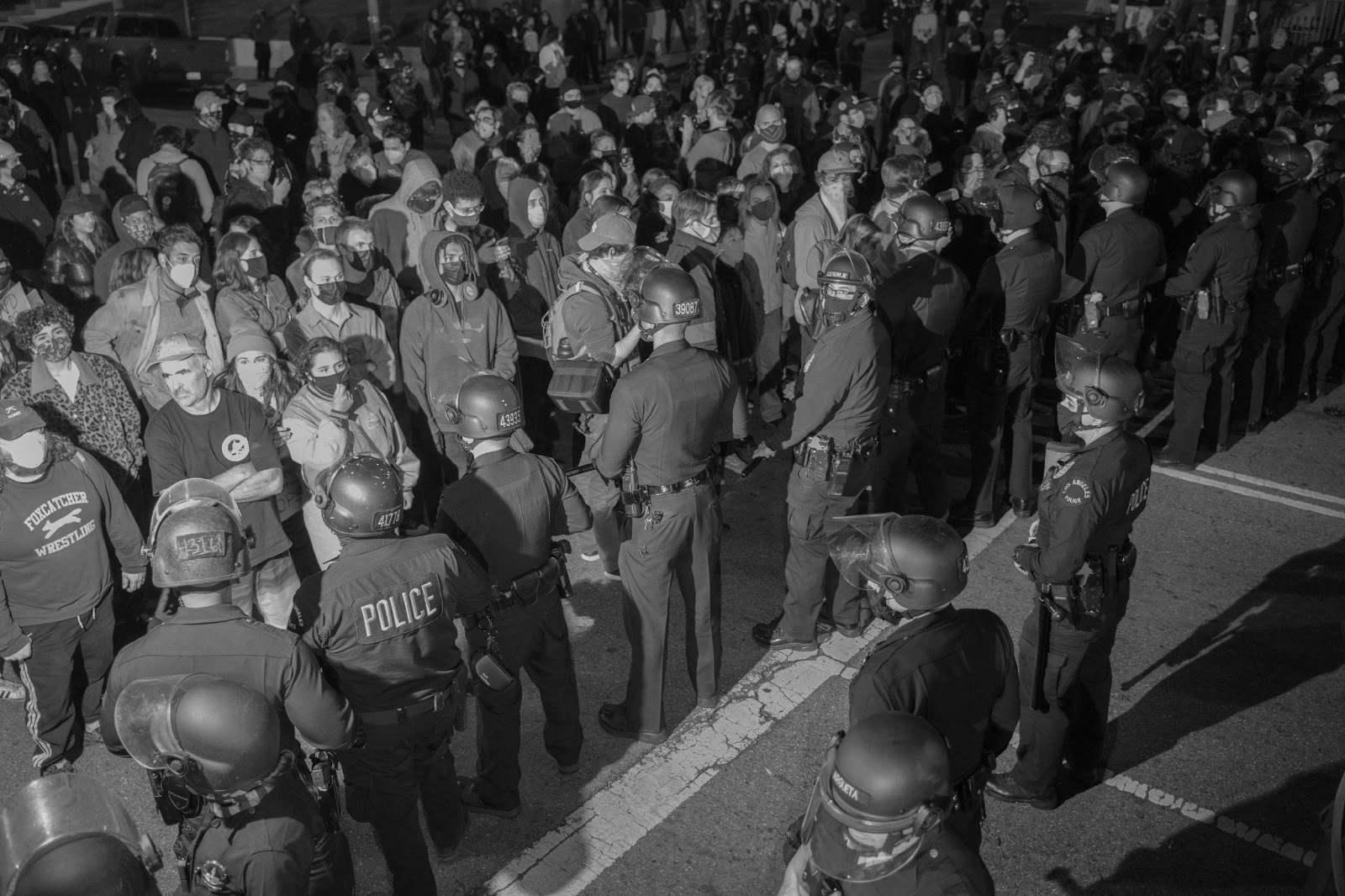 The next afternoon, protesters arrived outside Echo Park Lake to hold a vigil for the events of the previous day. A skirmish line of officers blocked park access and faced off against a group of activists as another group blocked traffic at the intersection of Lemoyne Street and Sunset Boulevard. Tensions rose into the night until the LAPD declared an unlawful assembly, but provided no escape route, trapping press and protesters alike.

In total, the LAPD arrested 182 people that night, including credentialed members of the media who had been “kettled” — surrounded from all sides and prevented from leaving — alongside activists. The aggressive tactics used by the LAPD call to mind the controversial responses to last summer’s Black Lives Matter protests. 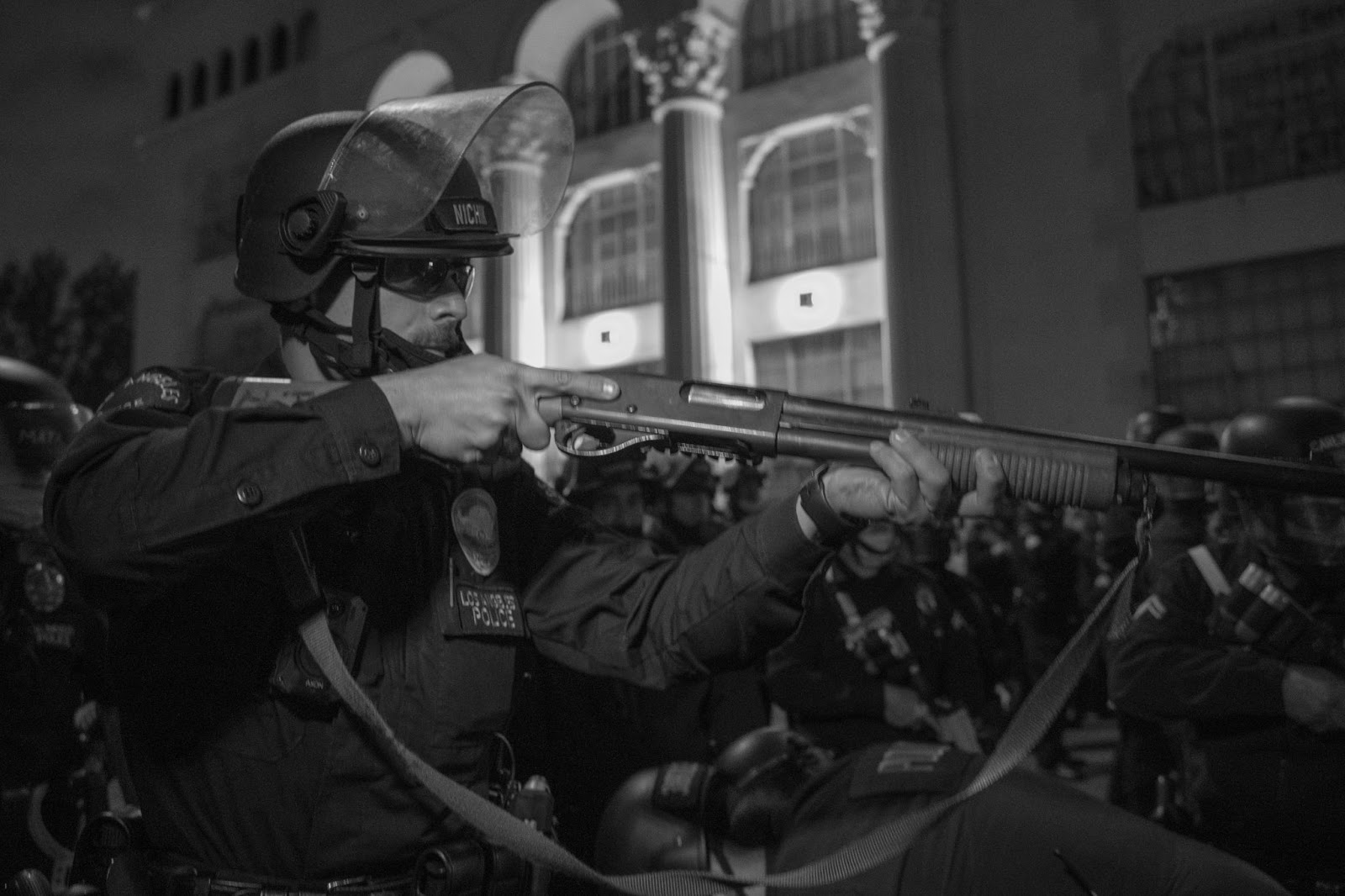 Officer Andrey Nichik points his gun at protesters and journalists while yelling at them to clear the area. Photo credit: Jeremy Lindenfeld / WhoWhatWhy 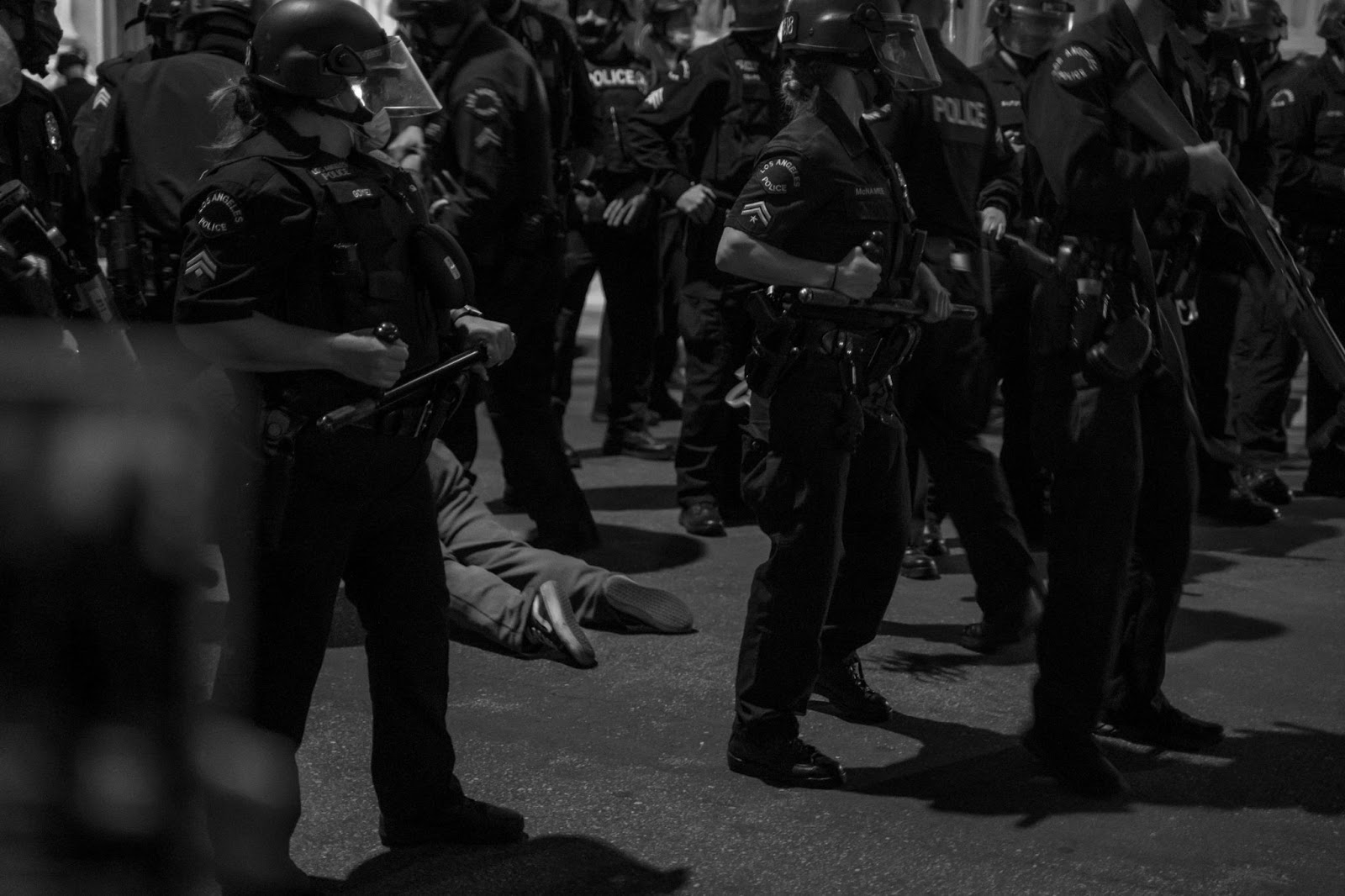 A protester is arrested and dragged on asphalt by police officers. Photo credit: Jeremy Lindenfeld / WhoWhatWhy

In the aftermath of the mass park eviction, some homeless residents who were promised temporary housing by the city never received it, leaving them to fend for themselves without the community they had grown to rely on within the park. Others declined the offered housing, citing restrictive curfews and lack of privacy. Former residents of Echo Park Lake continue to advocate for their rights during press conferences at City Hall and other events around the city.

More than a month later, the park is still fenced off. The renovations continue. And, like previous flashpoints in LA’s homelessness crisis, the Echo Park Lake eviction came and went without any long-term resolution. 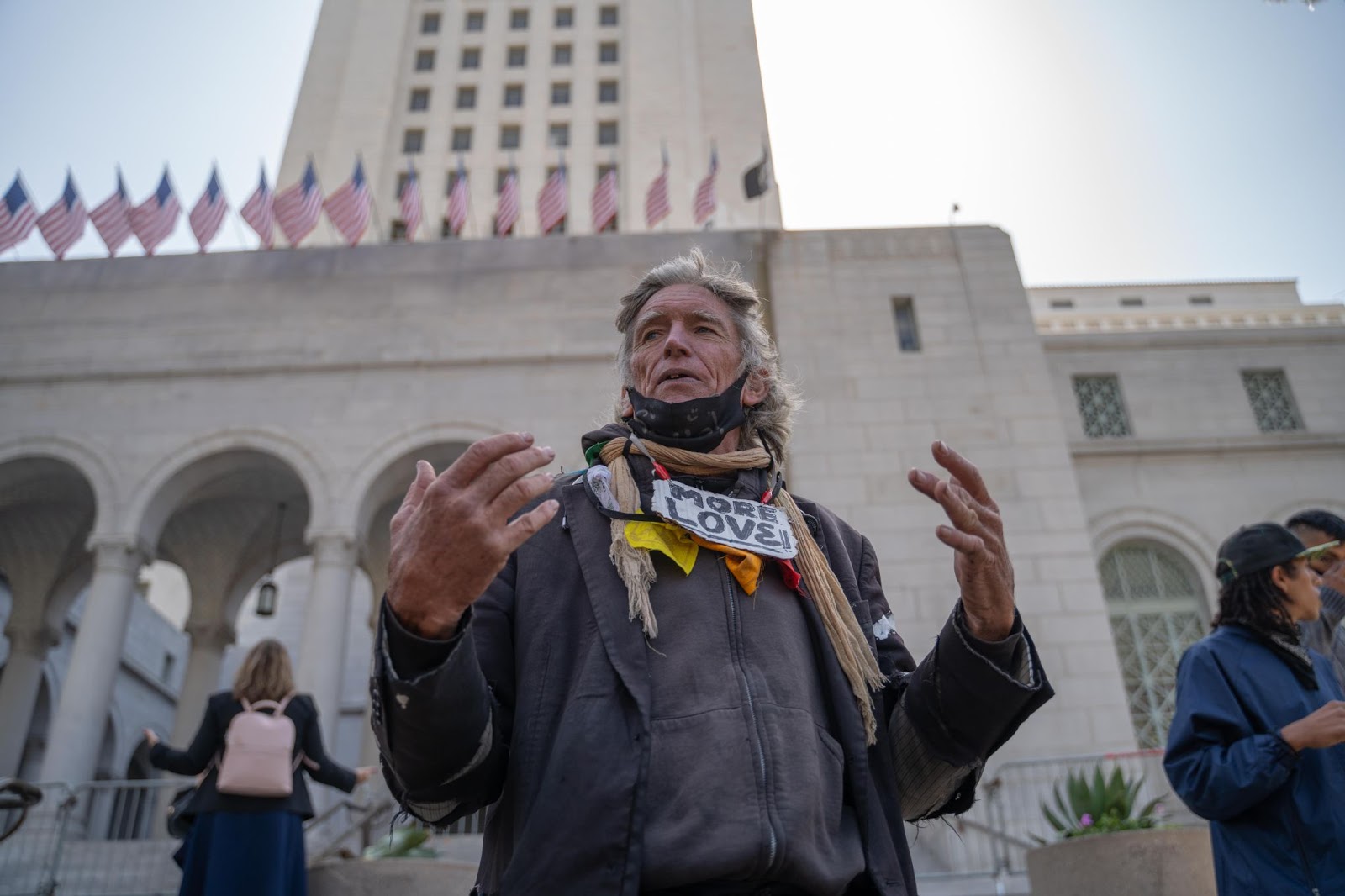 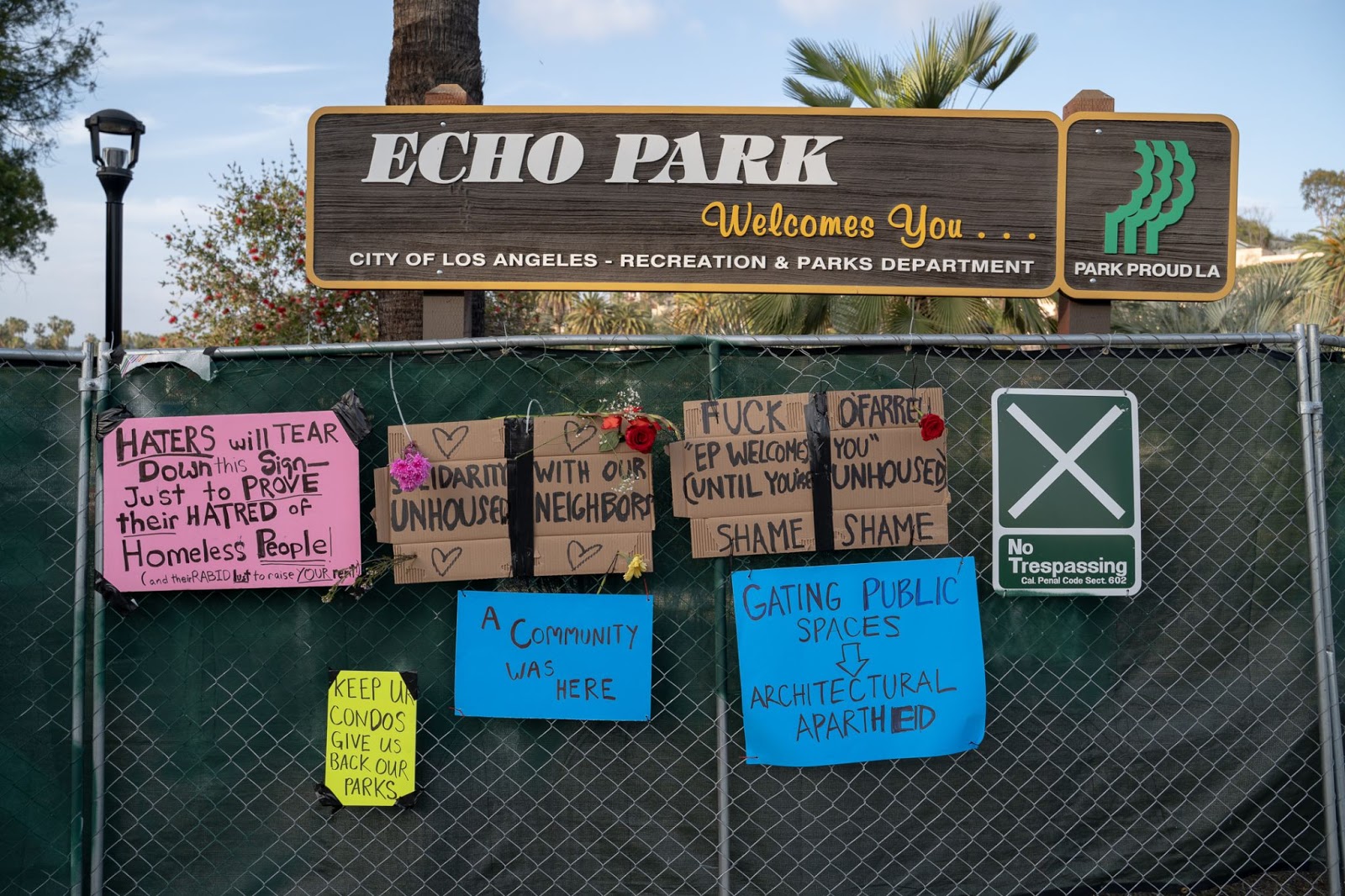