Amazon is fighting to reverse the outcome of the union election results at its JFK8 fulfillment center in Staten Island, NY. Christian Smalls is one of the key organizers for Amazon Labor Unions. Photo credit: © John Nacion/Action Press via ZUMA Press
Apprentice Stories Labor

Will NLRB Deliver a Victory for Amazon and Overturn Historic Union Election?

Following the biblical battle in which David bested Goliath, imagine if the defeated warrior had petitioned the government to redo the fight because he claimed it wasn’t fair.

Essentially, that is what is playing out in Phoenix, AZ, right now. Far away from the public eye, Amazon is pulling out all the stops to reverse the outcome of an election at its JFK8 fulfillment center in Staten Island, NY, where workers voted to unionize earlier this year.

Like other major US corporations, the retail and technology behemoth is fighting all attempts of its employees to form unions. Increasingly, this appears to be a losing battle as organized labor, whose numbers and influence had been waning for many years, is making a comeback.

And with each victory, the anti-union dam these corporate giants have built is showing cracks.

“The fact that more than 100 Starbucks stores across the country have filed for unionization, the fact that Uber and Lyft drivers have been involved in organizing, and the fact that fast-food workers have been involved in organizing, has absolutely encouraged more activity among not only the Amazon workers of Staten Island, but in other Amazon facilities in other parts of the country,” said Kent Wong, director of the University of California Los Angeles Labor Center.

The victory at JFK8 was among the most important wins so far, which is why it is not surprising that Amazon is trying to fight it. 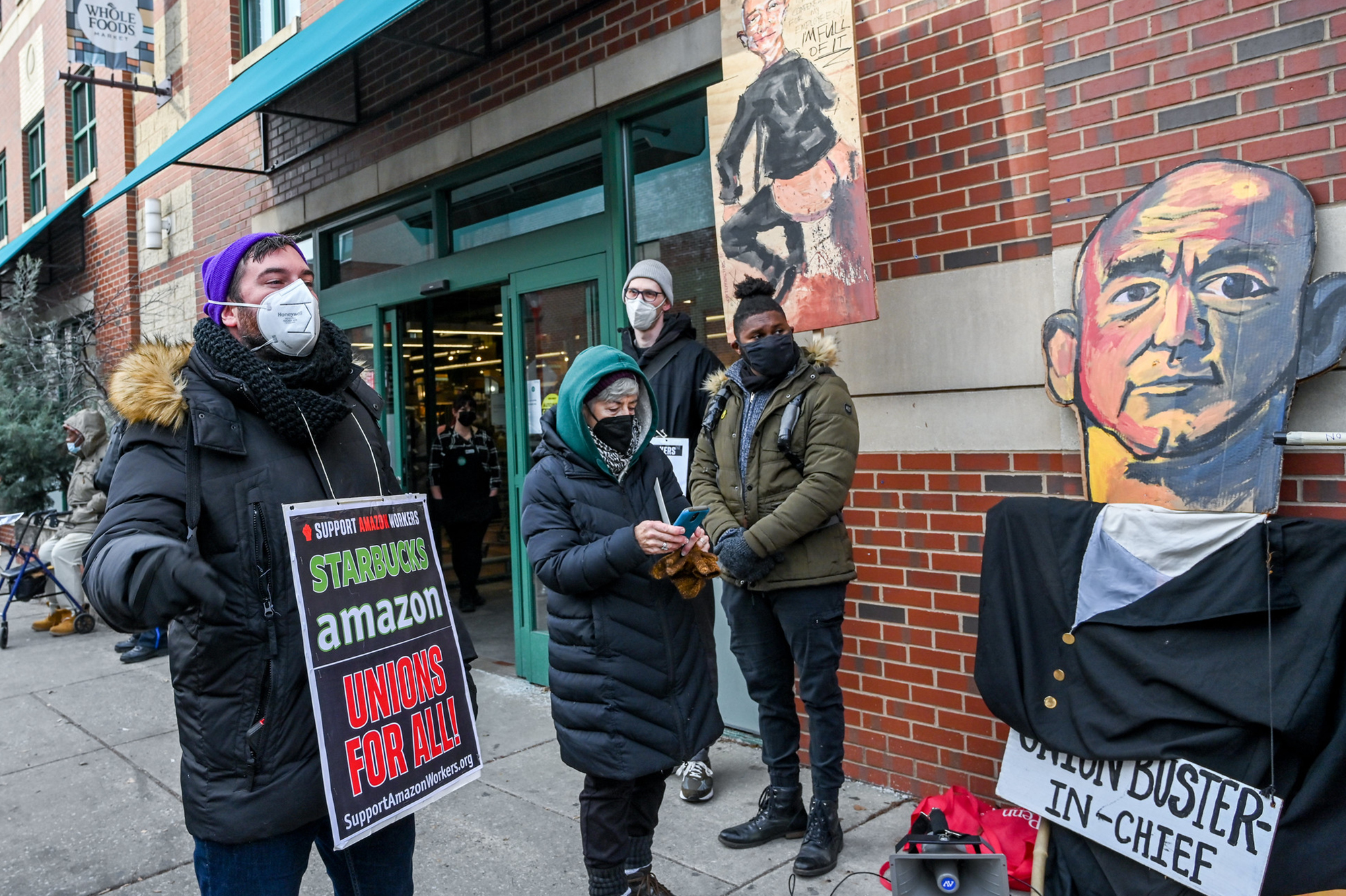 The company, which ranks second on the Forbes Fortune 500 list, claims that the vote was not fair and that employees associated with the Amazon Labor Union (ALU) impeded their colleagues’ free right to choose whether to unionize.

Now, Amazon has taken its grievance before the National Labor Relations Board (NLRB), a federal agency whose mandate is to protect the rights of workers and bring complaints against offending parties. The case is being heard by the regional NLRB office in Arizona.

What is surprising, however, is that nobody is paying attention to the hearings, which began on June 13. This lack of attention is noteworthy because the ultimate ruling, which experts believe will eventually be made by the entire NLRB, could have significant ramifications for organized labor in the US.

“If the Staten Island victory stands, it will be a huge boost to Amazon workers and other workers across the country,” Wong said.

And Risa Lieberwitz, a professor of labor and employment law at Cornell University, called the initial election a “huge victory” that could be amplified if the ALU were able to build on it “and engage in collective bargaining to gain a good contract for the employees.”

How the NLRB Works

Before it can do that, the union has to survive Amazon’s challenge.

Either employers or unions may file objections with their regional NLRB office following a disputed election. In this case, Amazon is objecting to the certification of the results of the JFK8 election, and since the Brooklyn NLRB office is named in Amazon’s filing, the regional hearings are taking place in Phoenix.

The regional director’s job is to determine if the election took place under “laboratory conditions,” a legal standard that the NLRB uses to describe an election that “as much as possible [achieves] a situation where employees can vote freely and uninhibitedly with regard to their choice about whether to be unionized,” Lieberwitz said.

Should either party object to the regional director’s decision, they have the option to appeal to the full board in Washington. If the director sides with the union and the board either chooses not to review the decision or upholds it, the results of the election will be certified.

If the regional or national board chooses to sustain Amazon’s objection, then the remedy would be to hold a second election.

Judging by its history of anti-union tactics, if the election results are certified, Amazon will likely do whatever it can to delay collective bargaining efforts by ALU, according to Lieberwitz. This could then result in an unfair labor practice complaint being brought by the NLRB. 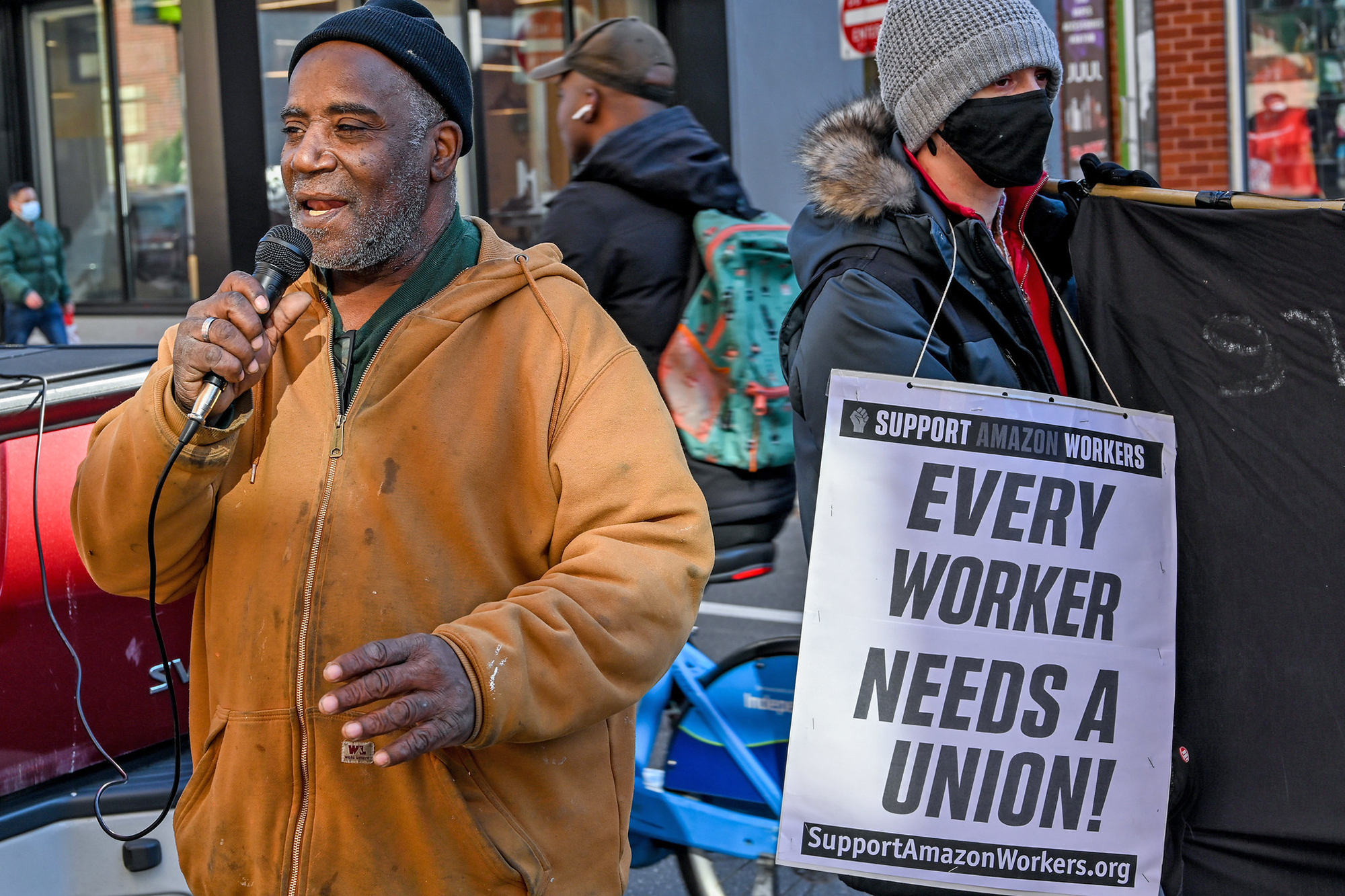 While the public is largely unaware of the proceedings in Phoenix, they have attracted their share of controversy — as well as attention — from politicians from both sides of the aisle.

Even before the hearings began, Amazon accused the NLRB general counsel’s office of bias because of an unfair labor practice case it pursued against Amazon in March of 2022. In the injunction, the general counsel seeks reinstatement and lost wages for an employee it says was wrongfully fired by Amazon for union activities. The company claims it fired the employee because of his abusive behavior toward co-workers during pro-union protests.

Four Republican legislators — Sens. Richard Burr (NC) and Mike Braun (IN), and Reps. Virginia Foxx (NC) and Rick Allen (GA) — agree with Amazon’s characterization. In a letter to NLRB General Counsel Jennifer Abruzzo, they write that the employee was fired not for his labor protests but rather for “hurling misogynistic and sexist threats” at a co-worker. They also suggest that the “Board’s filing of the petition a week before a union election at Amazon’s Staten Island warehouse was an attempt to influence unduly the outcome of the election.”

The timing of this filing and the accusation of undue influence are crucial. According to Lieberwitz, Amazon “is relying heavily on alleging that the general counsel interfered with laboratory conditions by seeking an injunction.”

“It is clear,” they said, “that Amazon is refusing to recognize a legitimate and overwhelming union election. … If Amazon can spend over $4 million in a single year on union-busting and $213 million on your compensation, it can afford a workforce that can collectively bargain for better wages, better benefits, safer working conditions, and reliable schedules.”

As for these ongoing hearings, it does not seem that “Amazon has been all that successful in convincing the NLRB that the union is interfering with the employees’ free choice,” said Steve Abraham, a professor of employment law at State University of New York (SUNY), Oswego.

For both Amazon and the ALU, the protracted legal battle is also a trial in the court of public opinion.

Though the retail giant is currently viewed favorably by 60 percent of Americans, some studies indicate that popularity is on the decline. Furthermore, 75 percent say that Amazon workers need union representation.

The company seems to prefer that this case attract as little attention as possible, as they petitioned to close the NLRB hearings to the public. Their request was ultimately denied.

“The more information that comes out that sheds a negative light on Amazon, the worse it’s going to be for Amazon’s public image,” said Abraham.

In that regard, at least, things are going the way of Amazon, which must be delighted that the media is largely ignoring the hearings so far.