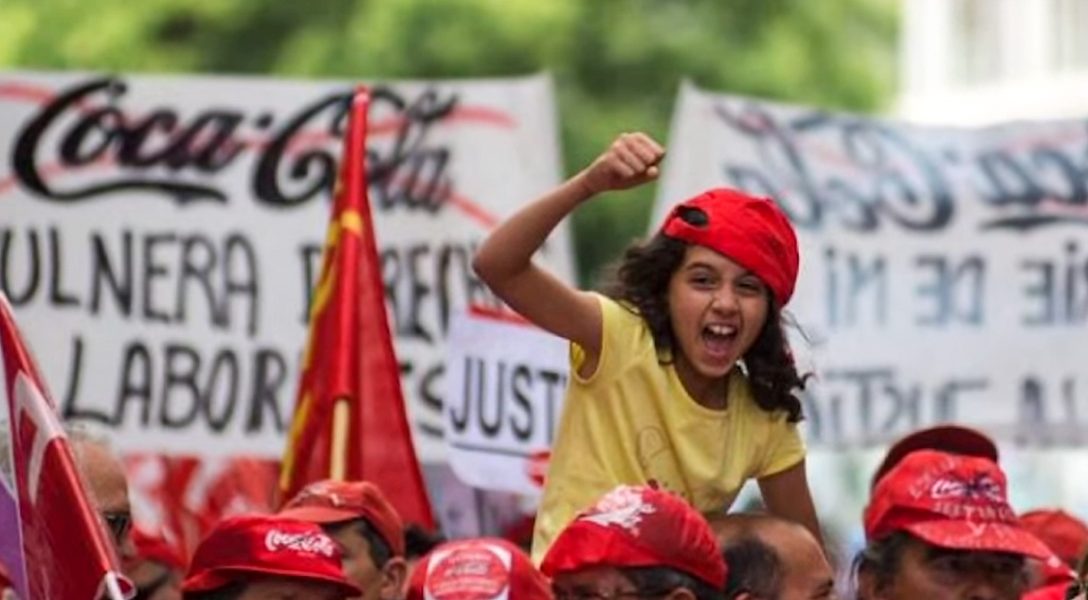 You don’t expect to see a morality play about corporate power vs. workers’ rights unfold before your eyes while you sip a glass of red wine at an outdoor cafe in Madrid’s hip and lively Plaza Santa Ana. But that’s what happened to me when a worker protest shattered the calm of a mild fall evening in a spot beloved by both tourists and locals.

It brought home the realization that the power of multinational corporations is global, affecting not only US workers, but workers worldwide. It also demonstrated that even when workers win court decisions, companies may still have the upper hand.

In the US, where private-sector unions have been losing strength for decades, we are not surprised when workers lose battles with companies. After all, only about 6% of private-sector workers belong to unions.

When companies shut down factories and export jobs, American workers hope to get a decent severance package. Rarely do unions contest the plant closings themselves.

Things have been different in Europe, where unions generally remain much stronger, not only in  membership but in political clout. Nevertheless, even in Europe, multinationals are convincing government leaders to adopt policies that curtail union power. Even well organized and deeply committed worker protests increasingly run up against corporate countermoves backed by employer-friendly governments.

A few sympathetic journalists told protesters that Coke warned Spanish media outlets that it would withdraw all advertising if they covered the protesters, Arturo told me.

CWA represents 700,000 workers in the US, Puerto Rico and Canada, and the union cooperates and consults with labor groups around the world. The only way unions can hope to address the imbalance between labor and management is by bringing more workers into the labor movement. Whether or not they belong to unions, she noted, “working people get tired of being treated as if they don’t matter.”

The Madrid workers’ in-your-face protest reflected the anger and frustration of their multi-year battle. I met “Arturo” when he and 50 others demonstrated in Plaza Santa Ana against Coca-Cola. (Arturo did not want me to use his real name.) Arturo is bald and solidly built, dressed in Coke’s classic red colors, his tee-shirt proclaiming in Spanish that the workers will not be “tamed, or bent” by company power. He spoke passionately to the crowd about the workers’ struggle, urging diners to boycott Coke and to reopen the bottling factory that had once employed him. He agreed to an email interview with WhoWhatWhy.

In 2014, Spanish bottler Coca-Cola Iberian Partners (CCIP) announced that it would shut down four of its eleven bottling plants in the country, including its Fuenlabrada operation in Madrid, which had been one of Coke’s biggest bottling plants in Europe. The announced closing would have cost the jobs of more than 1,000 workers.

CCIP said that this was a necessary cost-cutting move, because the plants had been operating at less than capacity. But the unions claimed that the Madrid operation alone had earned the company nearly $1 billion dollars between 2010 and 2012.

Arturo and his colleagues blame “Atlanta” for the layoffs. Although not owned by Coke, CCIP, the workers contend, would not have closed the plant without the assent of Coke corporate headquarters, based in the capital of the state of Georgia.

And indeed, not long after announcing the plant closings, CCIP said it would merge with two other European bottlers to consolidate all Coke bottling operations in Europe; such a reorganization could move jobs to countries, like Portugal, where labor costs are lower. Coca-Cola headquarters was involved in the merger, and now owns about 18% of Coca-Cola European Partners.

It’s an old story, repeated around the world and in the US. But in Fuenlabrada, more than 200 workers decided to fight. They said that their plant had been extremely productive, with loyal employees who had spent their entire careers with Coke. They refused CCIP’s offer to take lower-paying jobs at other plants, or to accept a severance package. They went on strike for months, enduring a lean Christmas and unpaid bills and mortgages, as they fought the Coke bottler both on the streets and in the courts.

Arturo decided to refuse Coke’s terms. Relocated workers were earning a little more than half the salaries they earned at Fuenlabrada, Arturo wrote. As for the severance package, he added, “I couldn’t accept the money instead of a future for my kids.” Given Spain’s high jobless rate, he wrote, his family’s future depended on him keeping his job. (When they negotiated the merger, company officials said the reorganization would result in more than $350 million in cost savings.) The workers have protested hundreds of times on the streets of Madrid, urging consumers to boycott Coke. Other unions joined the protests, with thousands of workers participating in rallies.

The workers also prevailed when they took their case to court, charging that Coke had violated the law when it so abruptly decided to shut down the plant. Two courts in Spain ruled in their favor in 2014 and 2015. Judges found that workers were not given adequate information about the closings, and that the company had illegally used replacement employees to subvert the union’s strike protesting the plans to close the plant.

Did the court victories swing momentum to the workers’ cause? Not really. Even as CCIP appealed the court’s verdict, it was carrying out plans to dismantle the plants.

In Fuenlabrada, CCIP hauled away its equipment, leaving only a shell behind. In October 2015, the company’s move was validated. Spanish judges agreed that CCIP, by rehiring workers and paying them their old salaries, had fulfilled its obligations. CCIP did not have to continue its factory operation at the Madrid site. Arturo charged that CCIP misled the judges by claiming that it would transform the bottling plant into a combined warehouse and logistics center.

Today, the workers who were reinstated by the courts are doing manual tasks in a hulking industrial skeleton. True, they are getting paid. But they no longer have real work to do. Arturo worked in quality control. Now, he wrote, his administrative job requires him to fill out one form a day. “That takes five minutes.”

“Chemists and engineers are bottling by hand… precarious jobs” he added, lamenting that all the modern equipment at his factory, once called the “pearl” of Coke’s European operations, had been stripped from the building. Even worse, workers say that security guards monitor their every move, even their bathroom breaks.

Workers blame the conservative Spanish government for revising labor rules to make it easier for companies to fire workers. They also charge that they’ve been up against a media blackout. A few sympathetic journalists told protesters that Coke warned Spanish media outlets that it would withdraw all advertising if they covered the protesters, Arturo told me. Mainstream print media stories, the workers complained, have also been slanted towards Coke. (The worker protests did get some attention from The New York Times, Wall Street Journal and New York Post.)

In the US, Johnson said, fewer reporters cover labor issues, meaning less coverage of strikes and workers’ protests. And there have been communities, she added, where CWA efforts to place ads in local broadcast outlets or newspapers have been rebuffed. If the local paper and radio or TV station is owned by different companies, she said, CWA can publicize a newspapers’ refusal to carry a union ad on the local broadcast outlet, or vice versa. But media consolidation can make even that tactic difficult. If one company owns both the print and broadcast outlet in a community, “we have to figure out something else to get the story out.”

Johnson said that CWA increasingly turns to digital advertising to inform the public. In Spain, too, workers took to social media to make their case. This documentary, made by award-winning filmmaker Pere Joan Ventura, eloquently records their struggle.