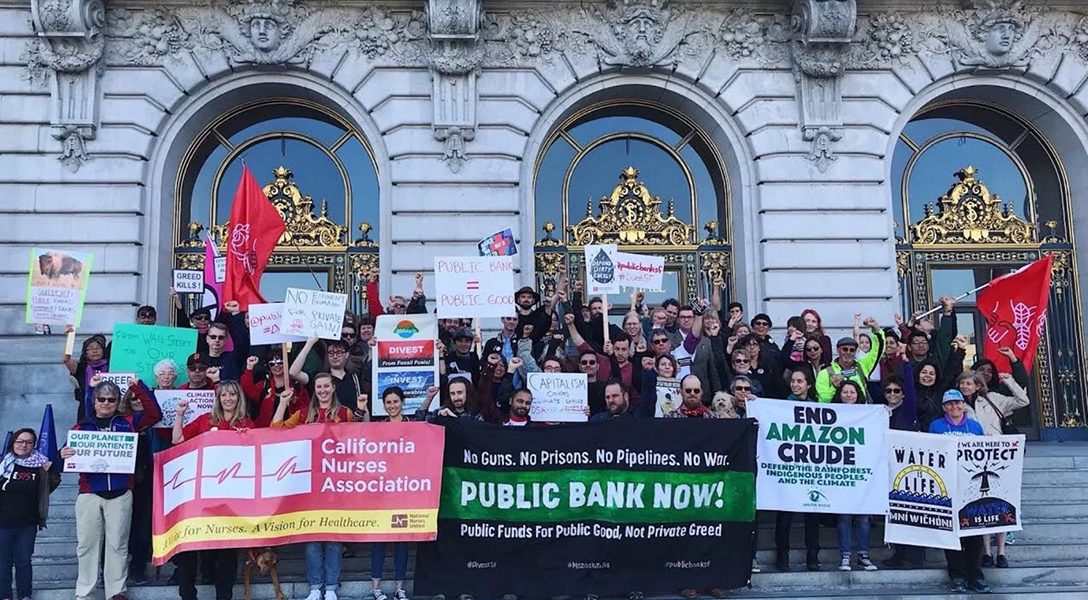 For only the second time in 100 years, a people-powered coalition overcame the stiff opposition of the banking lobby to successfully pass a law that legalizes public banking. Governor Gavin Newsom (D-CA) signed a bill into law last month allowing California cities and towns to establish public banks.

It was almost a century ago that a similar grassroots uprising in North Dakota overcame the clout of big finance to establish the state-run Bank of North Dakota. And the passage of the California law may reverberate across the country.

“We finally have the option of reinvesting our public tax dollars in our communities instead of rewarding Wall Street’s bad behavior,” AB 857 sponsor and California Assembly member David Chiu (D-San Francisco) told the Los Angeles Times.

In the opinion of proponents, a public bank would free localities from predatory Wall Street institutions and save taxpayers a lot of money. That money could then be used to fund needed projects such as affordable housing, renewable energy, and small business expansion.

The roots of the successful banking bill in California grew from earlier efforts by community groups to divest public funds from private banks that they viewed as perpetrating mortgage fraud, mass foreclosures, and investing in environmentally destructive projects.

Their divestment victories at the local level fueled the need to find alternatives to private banks for these public funds.

Citing a list of recent scandals in the private banking sector — such as the mortgage foreclosure crisis, skyrocketing student loans, predatory lending, phony bank accounts, and a lack of access to capital by small business — Chiu made the case for public banks.

“The public’s money should serve a public purpose and not line the pockets of Wall Street investors,” Chiu told WhoWhatWhy.

An often-cited example is the German municipal bank system. According to advocates, municipal banks there are responsible for financing over 70 percent of the country’s green energy transition. Rep. Alexandria Ocasio-Cortez (D-NY) has stated that public banks in the US could finance her proposed Green New Deal. Cover of the November 17, 1919, edition of the ‘Nonpartisan Leader,’ published by the North Dakota Nonpartisan League (NPL). Grassroots agitation by the NPL a century ago led to the creation of the state-owned and public Bank of North Dakota. Photo credit: John Miller Baer / Wikimedia

Echoing Chiu’s sentiments, Trinity Tran, founder and lead organizer of Public Bank LA, noted that the current financial system only serves a handful of people, and public banks put money back into the local economy.

There was a consensus that California banks were not adequately servicing the small business community with much-needed loans.

The legislation passed would address that issue by requiring a partnership between public banks and smaller local banks to extend credit lines.

Losing the Battle, Winning the War

Before the Public Banking Act was signed into law this year, the flashpoint for public banking was an initiative on the Los Angeles City ballot in November 2018.

Despite the severe handicaps of having little time to prepare for the general election vote, plus the opposition of the powerful banking lobby and the Los Angeles Times, proponents still managed to garner over 44 percent of the vote.

In light of the fact that many progressive ballot issues that challenged well-funded business interests routinely get buried by 3–1 margins, this strong showing was all the more impressive.

“That very significant base of public support was critical at convincing many of my Southern California colleagues to support [the Public Banking Act],” Chiu said.

The initiative had an impact on the state legislation in another way.

Because it is very difficult for grassroots-driven ballot initiatives to overcome deep-pocketed special interest groups, the final law does not require larger cities to place public bank proposals on the ballot before moving forward. Instead, they can set the process in motion by a simple vote of municipal legislators.

“We lost the battle but won the war,” Tran declared.

Participants in this legislative fight claim there were two key strategies used that were essential to its success. The first was the mobilization of a broad-based grassroots movement to counteract the political clout of the banking lobby.

They cite the support of more than 180 organizations, including labor unions, California cities and counties, and environmental and community groups as key to its passage.

“Without comprehensive coalition building, we could have never powered this bill through the complicated legislative process over the opposition of the most powerful corporate lobbying group,” Tran said.

And the role of grassroots activists does not end there. As cities get down to the nitty gritty of setting up these banks, proponents will be there to guide the process to ensure they are both socially and environmentally responsible, Tran maintained.

The second strategic key to its success was keeping the bill “lightweight,” or streamlined. The bill did set up a specific procedure for establishing public banks, such as the initial drafting of a business plan as well as its approval by the local government and the California State Department of Business Oversight (DBO).

After that, the Federal Deposit Insurance Corporation would have to approve insurance. The final step would be approval of the bank by the Federal Reserve Board.

Banking on the Public Option: Will LA Lead the Way for People-Owned Banks?

“I don’t see any circumstances in which a public bank is approved without having rigorous policies and procedures that ensure they are operated in the public interest and without undue political influence,” Chiu said.

While this process would probably mean that the time needed to get a public bank up and running would most certainly take several years, supporters assert the final law avoids the pitfalls of micromanaging.

“If we added to the legislation that public banks were restricted from investing in fossil fuels … that would have made it a lot more difficult to move it through the California State legislature,” Tran said.

There are signs that the passage of California’s public bank legislation is adding to the momentum for public banking in states and cities across the country.

After legislation to establish a statewide public bank stalled in the New Jersey Legislature, Gov. Phil Murphy (D) recently pledged to use the power of his office to revive the bill.

Tran explained that there are at least 15 pieces of legislation around the country that would establish public banks at the state or municipal level, including  the state of Washington’s allocating $500,000 to draft a public bank business plan.

“I hope that this legislation really inspires and empowers public banking advocates and activists across the country,” Tran said. “Despite the power and might of our opposition, we were able to win.”