Joe DiSpenza and Tony Robbins offer seductive blends of NLP, mysticism, neuroscience, and self-marketing. Are they consciously manipulative or do they believe their own hype? Photo credit: © Artur Widak/NurPhoto via ZUMA Press
Culture

Waiting for the Miracle

When you’ve fallen on the highway
And you’re lying in the rain,
And they ask you how you’re doing
Of course you’ll say you can’t complain
If you’re squeezed for information,
That’s when you’ve got to play it dumb
You just say you’re out there waiting
For the miracle, for the miracle to come
– Leonard Cohen

Over the last week or so, I keep toggling between two completely different authors, feeling the tension between them, seeking to resolve something within myself. One of these thinkers, Joe DiSpenza, represents the post-New Age consciousness culture which, in America, continues the legacy of the “New Thought” movement that my former editor, Mitch Horowitz, often promotes (The Power of Positive Thinking, Think and Grow Rich, etc). The other, Clive Hamilton, is an Australian author who writes about the climate emergency we confront as a species.

Particularly, I have been reading DiSpenza’s Becoming Supernatural and contrasting it with Hamilton’s Requiem for a Species. It could have been Tony Robbins versus John Michael Greer, or David Wallace Wells versus Deepak Chopra. There were many options.

DiSpenza is immensely popular among many people in my extended community. Friends pay thousands of dollars to attend his workshops, which are thronged with participants, netting him tens of millions. If I had to put a number on it, I would say he is 70 percent a classic American snake oil salesman/con artist, while offering 30 percent of something important and valuable (probably that is how all truly great cons work).

When it comes to these post New Age consciousness gurus with massive followings, we almost never find an impartial critical analysis. Critics either dismiss their work out of hand, or their devotees lionize them. For example, with DiSpenza, it is easy to denigrate him by pointing to the fact that he is only a chiropractor by training yet pretends to be a world-class scientist (if a maverick), that he offers the results of scientific studies he claims he has performed on his workshop participants but without any rigor (double-blind, etcetera) or academic support. 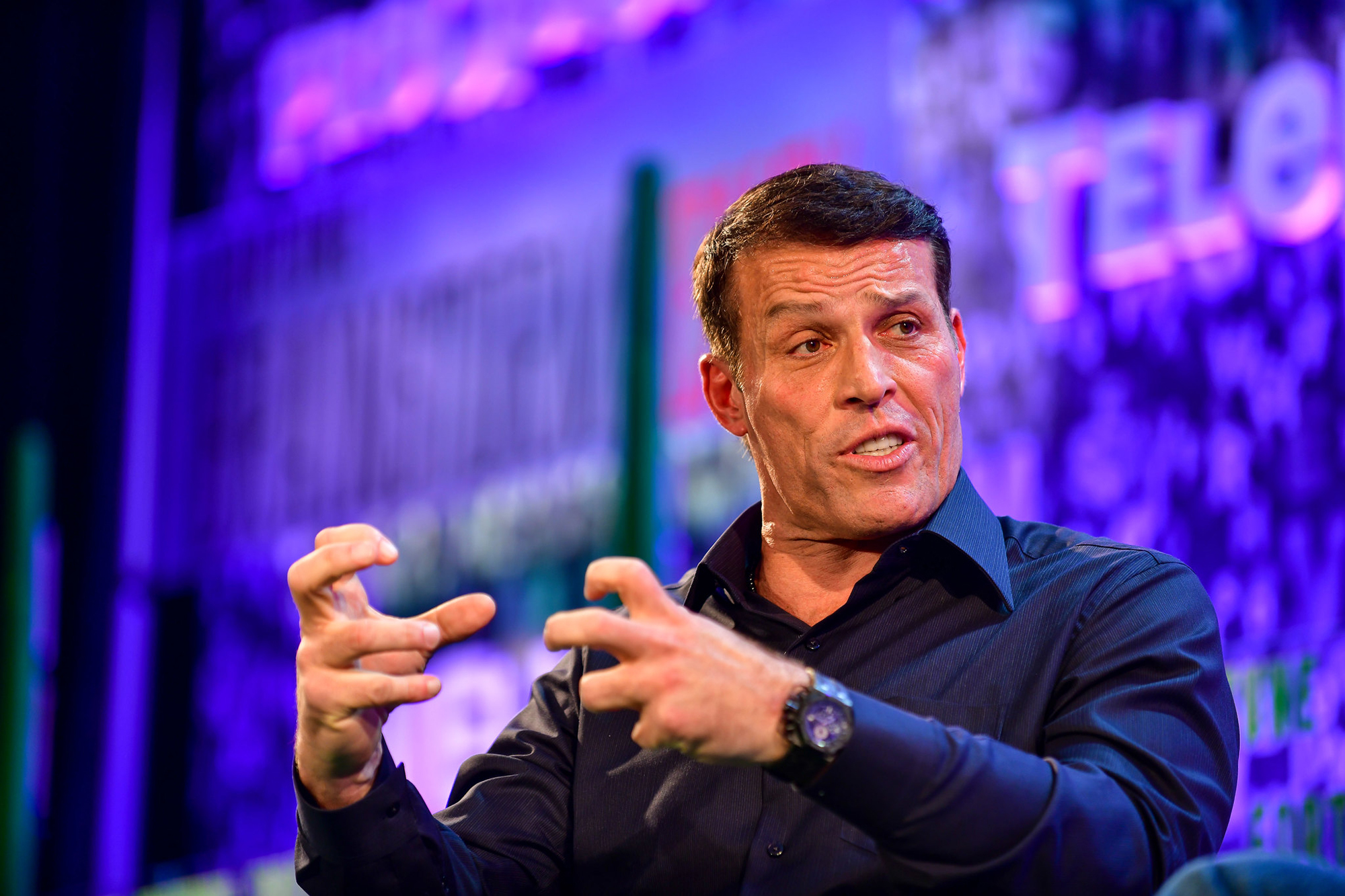 Joe DiSpenza and Tony Robbins offer seductive blends of NLP, mysticism, neuroscience, and self-marketing. They have built large followings. Is there anything wrong with this? Are they consciously manipulative or do they believe their own hype?

Yet, as I was feeling particularly infuriated with DiSpenza’s subtle, incessant self-promotion in Becoming Supernatural, I decided to watch one of his videos on “brainwashing” yourself to achieve success, and I found it an immediately helpful reminder. In the video, he cleverly redefines “success,” decoupling it from ideas of financial abundance or fame and redefining it as making progress toward the goal you have set for yourself.

One of his main, endlessly repeated ideas is that we continuously program ourselves with our thoughts — if we inherited negative thought patterns, we will unconsciously perpetuate them. This leads to negative outcomes. Acting unconsciously, we will find ways to repeat familiar negative situations we have known in the past. We become addicted to sadness, depression, self-hate, etcetera, seeking bigger hits of what Candace Pert calls “molecules of emotion.”

This resonates for me. I realize that I inherited a legacy of self-defeating, self-sabotaging thoughts that unconsciously impelled me, in the past, to act self-destructively. I am still seeking to deprogram myself from these distorted patterns. It seems a lifelong endeavor.

A part of me deeply identifies with being the rebel, the outsider, the exile. If I get accepted into any mainstream or institutional structure, I tend to feel uneasy, as if something is wrong. This is also because I feel that something is deeply off about our society — its values, beliefs, practices — and therefore, I find those easily assimilated or welcomed into it are not to be trusted.

In Becoming Supernatural, DiSpenza follows a tried-and-true formula that seems quite obvious and fake to me. Some of this is familiar from Eckhart Tolle’s The Power of Now, which also combines useful, even crucial insights with material I find trite, self-aggrandizing, and carefully calculated. Like Tolle, DiSpenza recounts his own mystical revelations, using the “humble brag” technique to reinforce the idea that he has attained a level of spiritual mastery and (implicitly, a bit like Jesus) now has power to make miracles. And you can, too, if you just follow him.

DiSpenza tells the story of a miraculous healing of a woman named “Anna” that occurred as a result of her devoting herself to DiSpenza’s workshop and meditation techniques over the course of several years. Anna apparently cured herself from cancer and other maladies — and there are a series of other, similar “case studies” at the end of the book. However, DiSpenza makes no mention of something that I have no doubt has also occurred quite often: desperate, ill people dedicating themselves wholeheartedly to his techniques, yet still getting sicker, still dying. But of course, to even consider such negative “case studies” would be to fall into negativity, hence programming one’s self at a cellular level to manifest negative outcomes.

I suppose that gets to the crux of my problem with DiSpenza and others of his kind, such as Tony Robbins. I find something cult-ic, creepy, and dangerous in the self-reinforcing ideology they promulgate that seeks to eliminate, suppress, or “deprogram” all negative patterns of thoughts and feelings. Yet I feel I must study these characters in much greater depth as they hold a crucial piece of the puzzle: They are masterful persuaders, and there is an important kernel of truth in what they teach. And “miracles” do happen, sometimes.

In Robbins’ Absolute Power, he similarly promotes internal brainwashing and thought control, noting, “You can create the powerful beliefs and states that will produce miracles for you and the people you care about.” In his conclusion, he writes, “You’ve learned that we live in an age when fabulous success is available to all of us, but that those who achieve it are those who take action.”

A few years back, I was invited to a screening of I Am Not Your Guru, a documentary following one of Robbins’ famous workshops in Florida. I had to overcome my visceral repulsion toward Robbins to watch the film. While watching it, I began to feel he was more compelling than I had allowed. I felt I had misjudged him. It was difficult to not be impressed by the immediacy of the revelations he brings about in his customers. He has the curious, outsized presence of a mythical figure, like a troll-giant from a medieval folktale.

It turned out that Robbins himself was at the screening. He spoke after it. I could barely listen to him for five minutes before I had to leave the theater. I found his use of language so manipulative — his rhetoric saturated in NLP techniques — that I couldn’t bear it. It was ironic to read in Unlimited Power: “You can become aware of when you are being programmed and manipulated.” No doubt!

On the other hand: Is there a problem if one is being manipulated, programmed, tightly corralled into unipolar positivity if it is, ultimately, in service of the good? Obviously not for Robbins. He writes: “When we change the behavior of the masses, we change the course of history … What would happen if you changed an entire world’s internal representation of war? What if the same power and technology that could get massive numbers of individuals to fight could be used effectively to bridge value differences and represent the unity of all peoples?” I admit I am interested to find out.

As regular readers of my work know by now, I believe that consciousness (not matter) is the fundamental reality. Everything is magic, and magic is real. I have personally experienced many paranormal, psychic, and even miraculous events. In a universe woven from consciousness, anything is possible.

We need to meticulously study and research this type of phenomena. To do so, we must apply techniques that go beyond the known methods of science, which depend on repeatable, verifiable results and proofs. Unfortunately, the post-New Age consciousness culture has fused with neoliberalism and entrepreneurial capitalism, supporting the narcissistic cult of the separate self. It puts forth a limited vision of reality that doesn’t support the level of realization and collective, collaborative action we need to face the ecological emergency.

The American fantasy promoted by these master persuaders — that “fabulous success is available to all of us” as well as the belief that we need to deprogram ourselves from negative thoughts and feelings — makes it difficult to confront the very difficult aspects of the reality we are confronting now.

I will dive deeper into Requiem for a Species next time, but will end with two quote from the book today:

Apart from the climate ‘skeptics,’ most people do not disbelieve what the climate scientists have been saying about the calamities expected to befall us. But accepting intellectually is not the same as accepting emotionally the possibility that the world as we know it is heading for a horrible end. It’s the same with our own deaths; we all ‘accept’ that we will die, but it is only when death is imminent that we confront the true meaning of our mortality. …

Apart from institutional factors that have prevented early action — the power of industry, the rise of money politics and bureaucratic inertia — we have never really believed the dire warnings of the scientists. Unreasoning optimism is one of humankind’s greatest virtues and most dangerous foibles.”

How do we integrate the realistic/pessimistic understanding of the ecological emergency or “meta crisis” while grasping the underlying reality of consciousness, knowing that our minds do have a crucial role in defining and determining reality? How can we revise/rewire the problematic aspects of post-New Age ideology to help us authentically face and navigate the critical, dire times just ahead?

I will consider this more, next time. I would love to hear your thoughts, ideas, in the comments.