Ukraine Protests: We Were, We Are, and We Will Be

Some of those gathered in Times Square the evening of March 2 appeared to have wandered there from Ash Wednesday services, bearing on their foreheads the Lenten symbol of hope in the face of despair. Despite the ashen reality of Russia’s invasion of its neighbor, protesters and bystanders alike joyously chanted, sang and made speeches.

The gathering of mostly local Ukrainian Americans was organized through Telegram, Facebook, and Twitter. Several hundred protesters painted the north section of Times Square the yellow and blue of the Ukrainian flag with handmade signs that denounced Russian President Vladimir Putin and expressed solidarity with the Ukrainian resistance.

“Glory to Ukraine,” they chanted. “We were, we are, and we will be.” In reference to a no-fly zone Ukrainians are lobbying for they chanted “Close the sky” as well.

Sprinkled through the crowd were the country flags of sympathizers with Russian, Belarusian, and Georgian roots, all united in protest against “Putin’s war.” 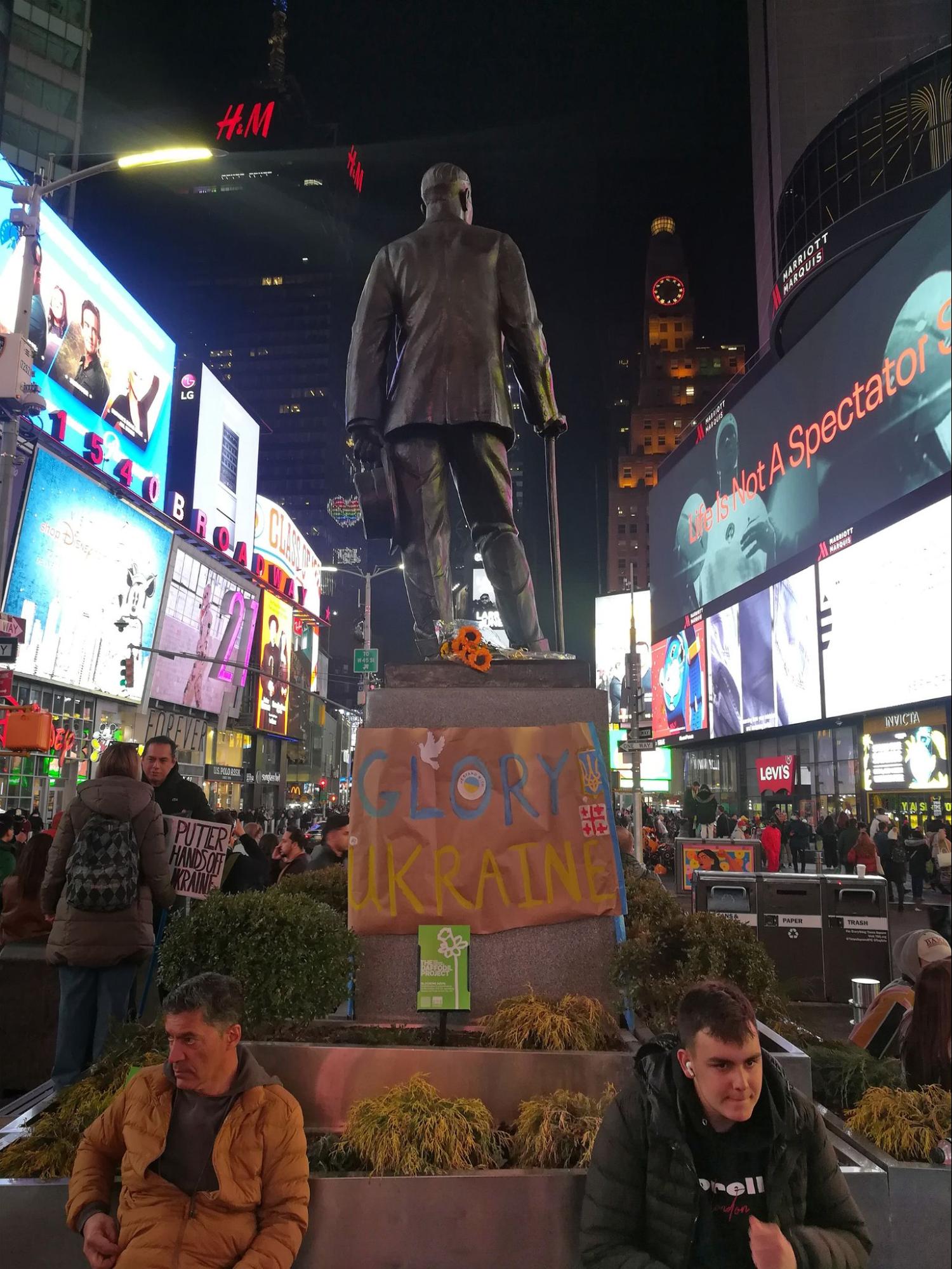 Maria, a graduate student, held a sign that read “Every Morning Mom Dad Are you OK?” Her family lives in Ternopil, in western Ukraine, outside of Lviv, not under direct attack but terrorized. She was afraid to give her full name out of worry for them.

“My two sisters and their babies live with their parents,” she said, welling up as she pictured them hiding in shelters. Meanwhile, she knows, she and friends in their 30s, who were infants when the Soviet Union collapsed, are carrying on a struggle for autonomy long thought decided. Many have joined the Ukrainian army in hopes of repelling the invader.

Others at the rally are trying to coordinate from their homes here aid to Ukraine. 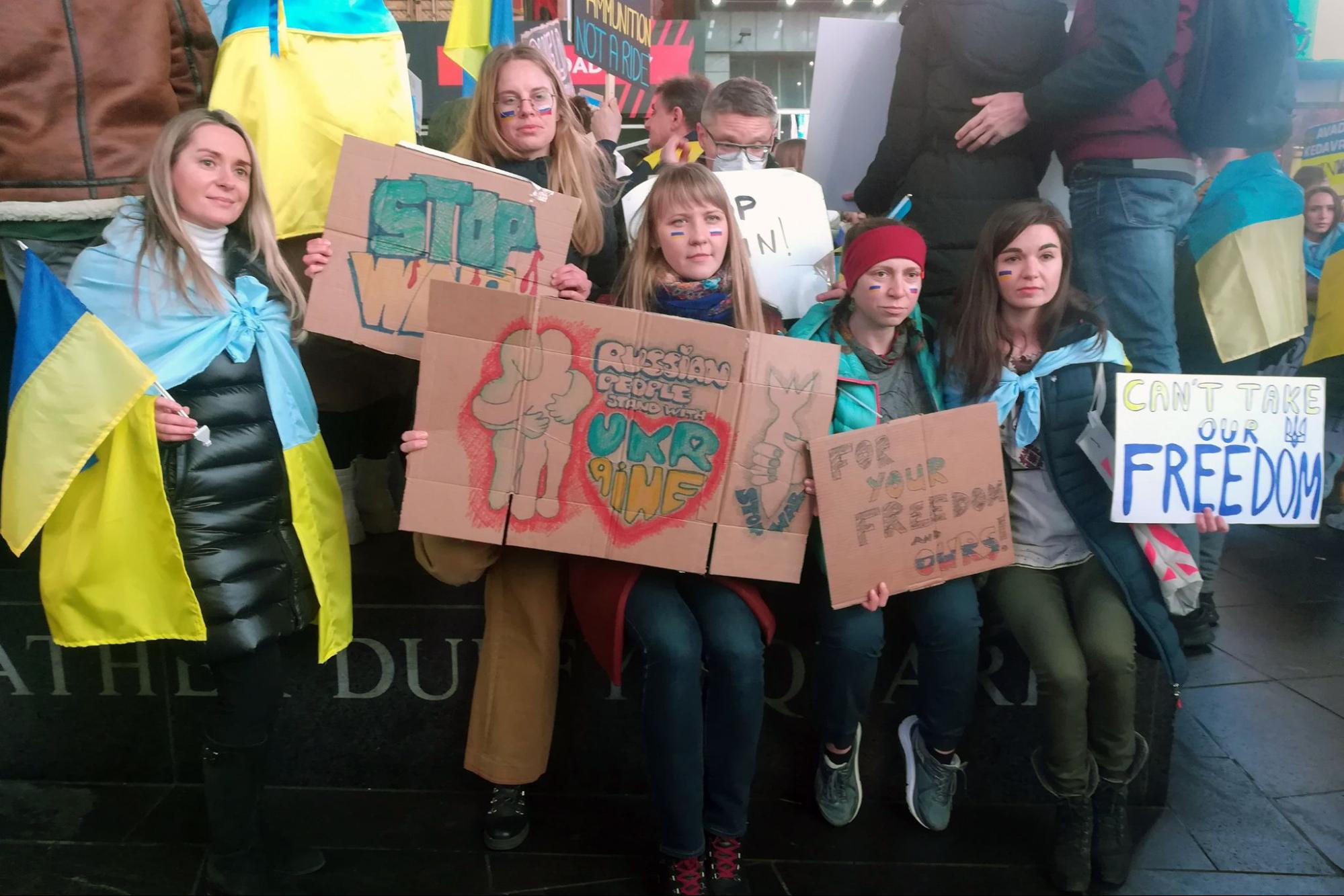 David Vayman runs 1Voice, a telecommunications company that has workers in Ukraine. He is organizing the shipment of supplies that these workers will truck over the border to contacts in Poland for distribution to refugees.

Especially in demand, according to Vayman, are “baby clothes, thermals, protective goggles, baby wipes, socks, and more socks.” Also “for the military: Kevlar vests, Kevlar helmets, but that’s really hard to get over there because vests are illegal to transport.”

Vayman, whose parents are from Odessa, is working with contacts in Texas to secure a license to ship protective vests. He will be accepting donations this weekend from 10 a.m. to 6 p.m. at 2240 E 26 Street in Brooklyn, NY. 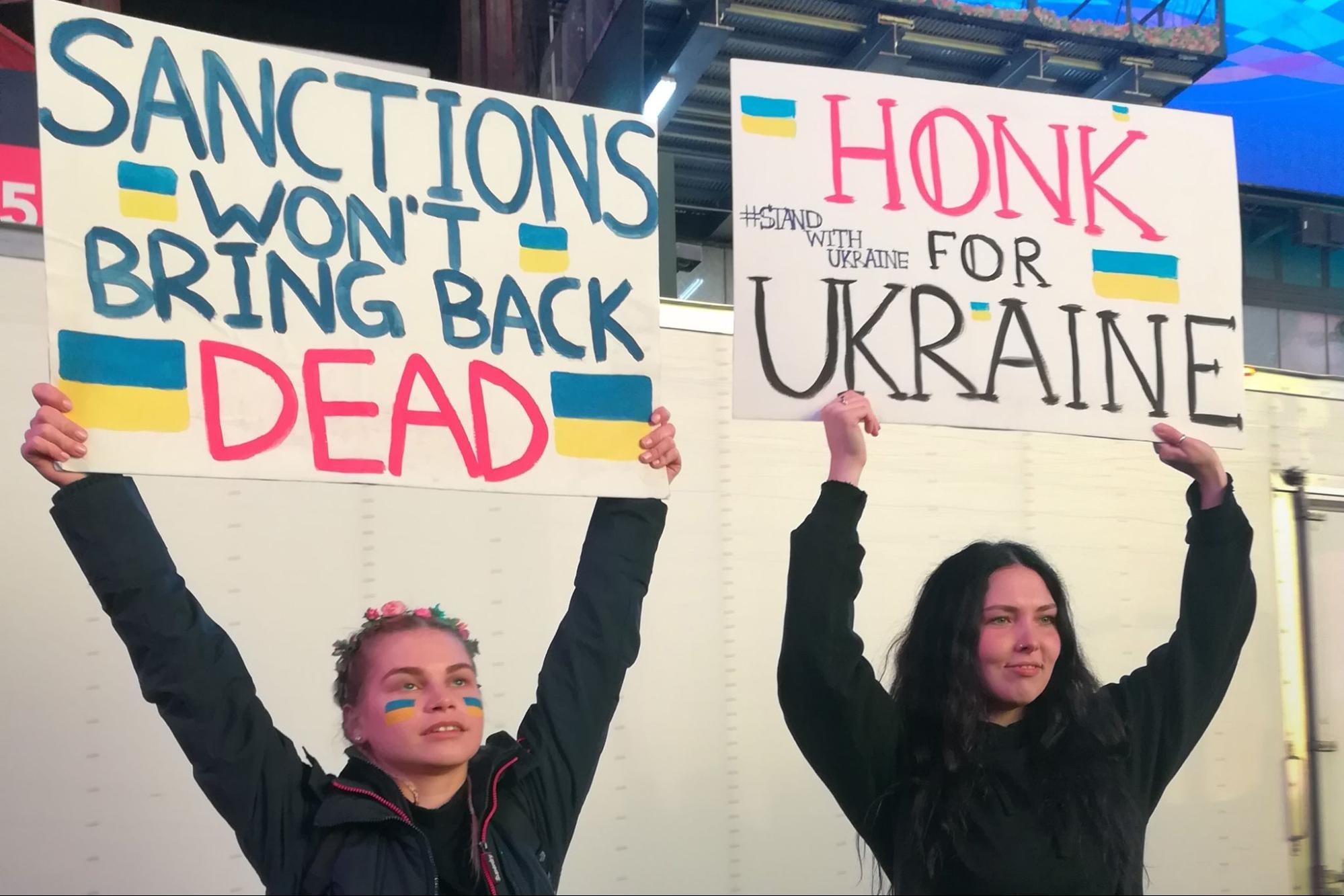 Protesters called for more help from the US, including establishment of a no-fly zone over Ukraine. Photo credit: Will Lasky / WhoWhatWhy

Betty is a Ukrainian American Jew born in Odessa who, with friends, has organized a Venmo account for direct aid and a website with information on how to donate.

“We were donating to charities,” Betty said, “and then we would go on Instagram and social media and we would see someone we know is directly asking for help. Somebody we know is a volunteer working, organizing, feeding people. We want to help those people as soon as possible.” 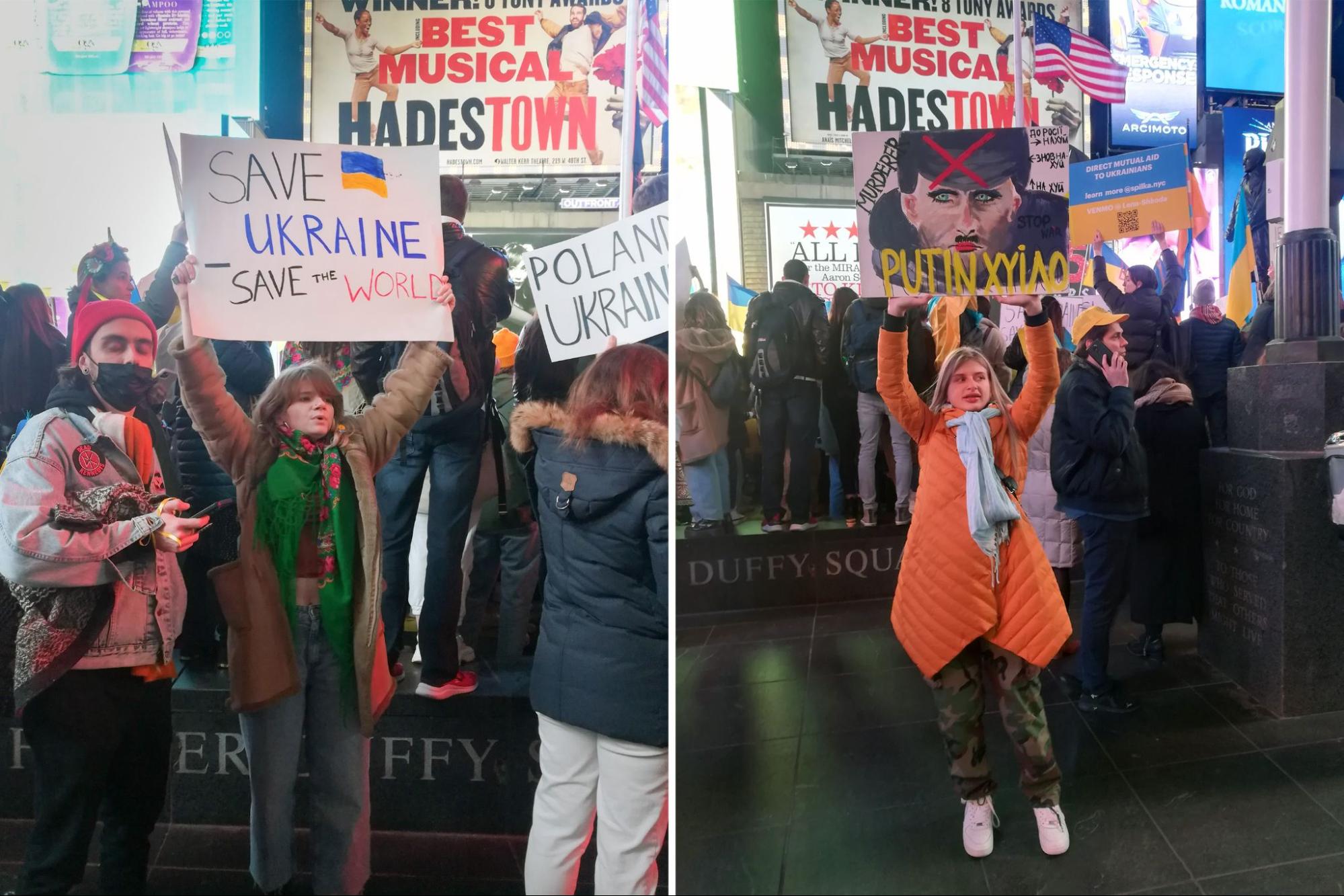 Xyilo, translated mildly as “prick,” is a harsher epithet in Ukrainian. Photo credit: Will Lasky / WhoWhatWhy

As the natural light faded, the American Eagle Outfitters billboard in Times Square flashed a massive yellow and blue display.

“I encourage everyone to do something because this is happening now and getting worse and worse. Even when all this is over, we’re going to have to rebuild Ukraine,” Betty said.

Punctuated by honks from supportive passing drivers, a melancholy chant rose up into the windy night: We were, we are, and we will be. 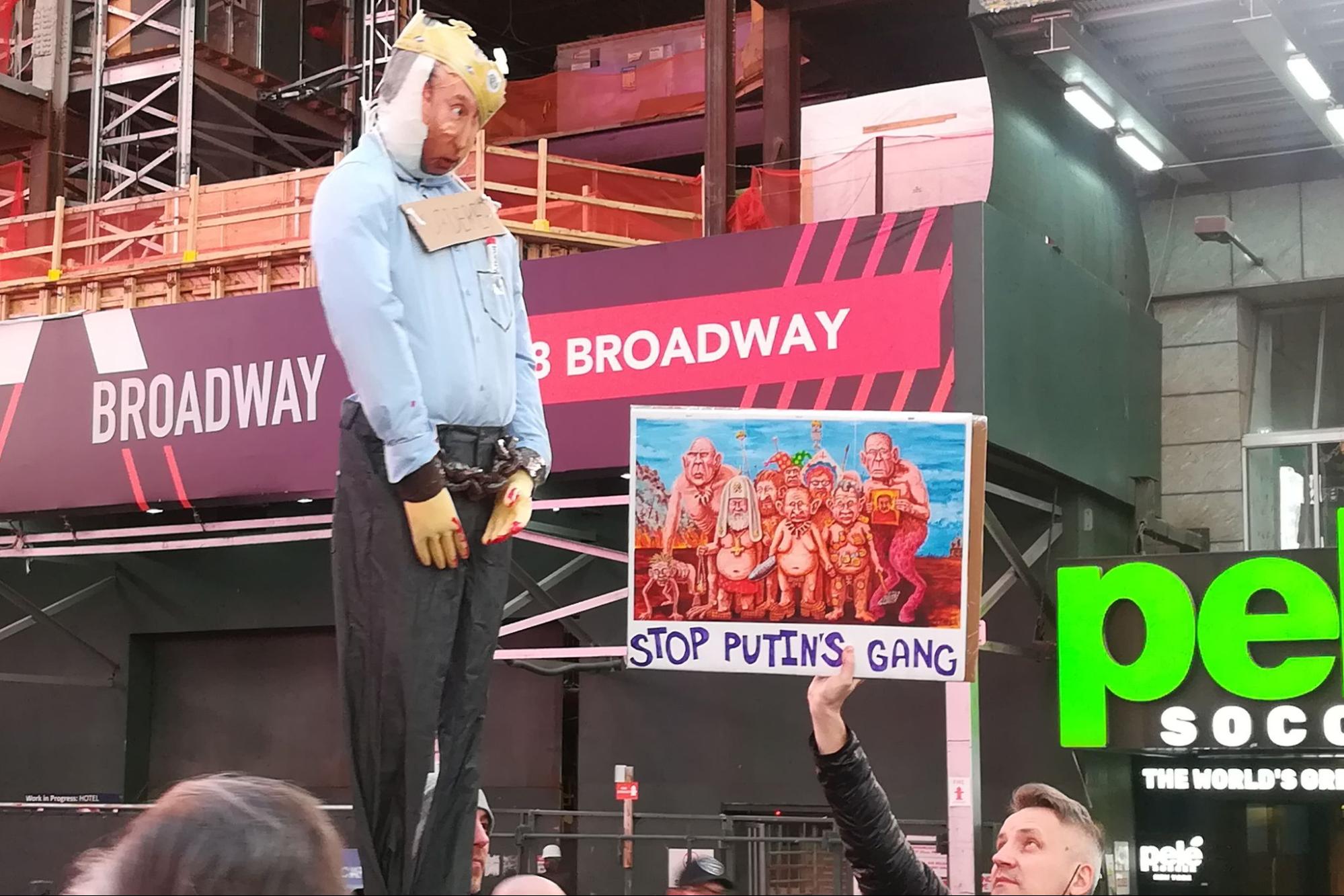