Ukraine Keeps Calm and Carries On

Hours after Russia bombarded cities throughout Ukraine with 70 missile attacks on November 23 that left at least 10 people dead, a family in Kyiv sang happy birthday to a little girl in a pizza restaurant.

The electricity was on, and the restaurant was calm. No one seemed rattled by the recent attacks that had just occurred. Servers brought out a cake for the little girl, three women sat at a table with cocktails, and at another, a man hunched over his laptop, perhaps making up for lost time at work. Outside, the sky was orange, and smoke filled the surrounding streets.

In Ukraine, the chaos of war has become a daily occurrence. Since Russia began its invasion nine months ago, more than 6,800 civilians have been killed and 7.8 million people displaced. Millions of Ukrainians are without heat and hot water during a winter in which, as many feared, Russia destroyed critical infrastructure.

While the news cycle shows daily scenes of bombed buildings and lives lost, what isn’t seen is what happens between the dramatic moments — when life just goes on. Amid intermittent attacks, Ukrainians still go to work or on first dates, meet for coffee, dance at underground raves, throw kids’ birthday parties, and then come home, often, to no heat or light. They live in a strange limbo — hiding from missile attacks and going shopping for new clothes just hours afterward. 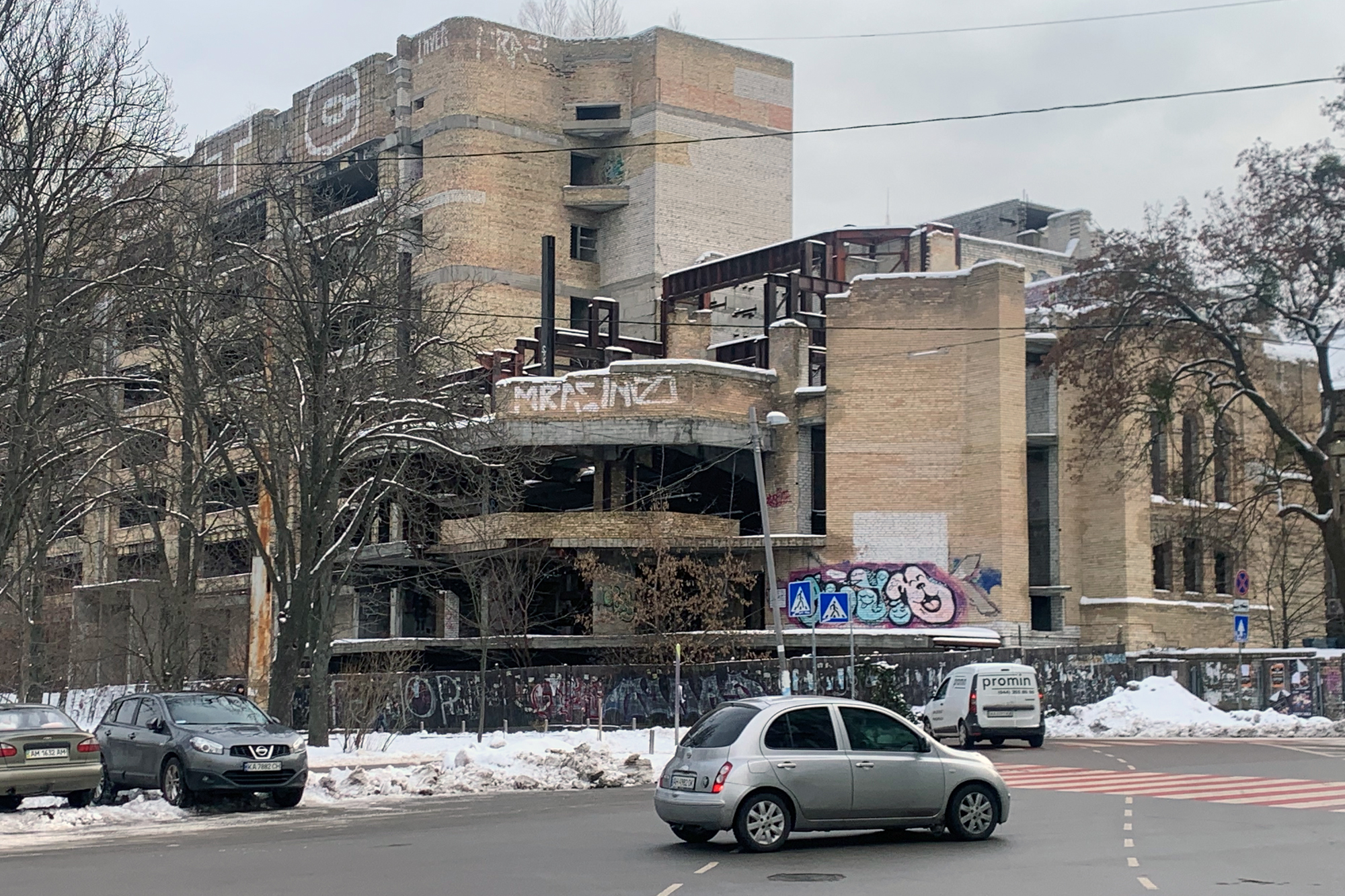 Buildings destroyed by Russian bombing in Kyiv, Ukraine. The damages of the war have become an everyday part of Ukrainian life. Photo credit: Anna Conkling / WhoWhatWhy

This everyday resilience is a modern-day instantiation of London during the Blitz, when the British government coined the phrases ”keep calm and carry on” and “business as usual” to boost morale through bombardment from Nazi Germany.

Ukraine has similar phrases. “Slava Ukraini” (“Glory to Ukraine”) and “Brave Like Ukraine” reflect the country’s desire to preserve the independence it achieved 30 years ago. On November 15, I was in Lviv, a western city in Ukraine. This was just a week after Kherson, a major port city in southern Ukraine, had been liberated from Russian occupation. Lviv has been a place of refuge, a light at the end of the tunnel for 200,000 internally displaced people that have flocked to the city since the beginning of the war.

Life carries on in Lviv, though residents constantly monitor Telegram channels that warn of possible attacks. The first two air raid sirens I heard were on a Saturday and Sunday; they were just precautions — Russian jets flying over Belarus, close enough to Lviv to be a threat but not urgent enough that citizens needed to hunker down. So people kept calm and carried on.

“There is an innocence in hearing your first air raid sirens,” a twenty-something man named Max told me during the Sunday alert. We drank tea in his kitchen, talking about music, places we hoped to visit, and the war. 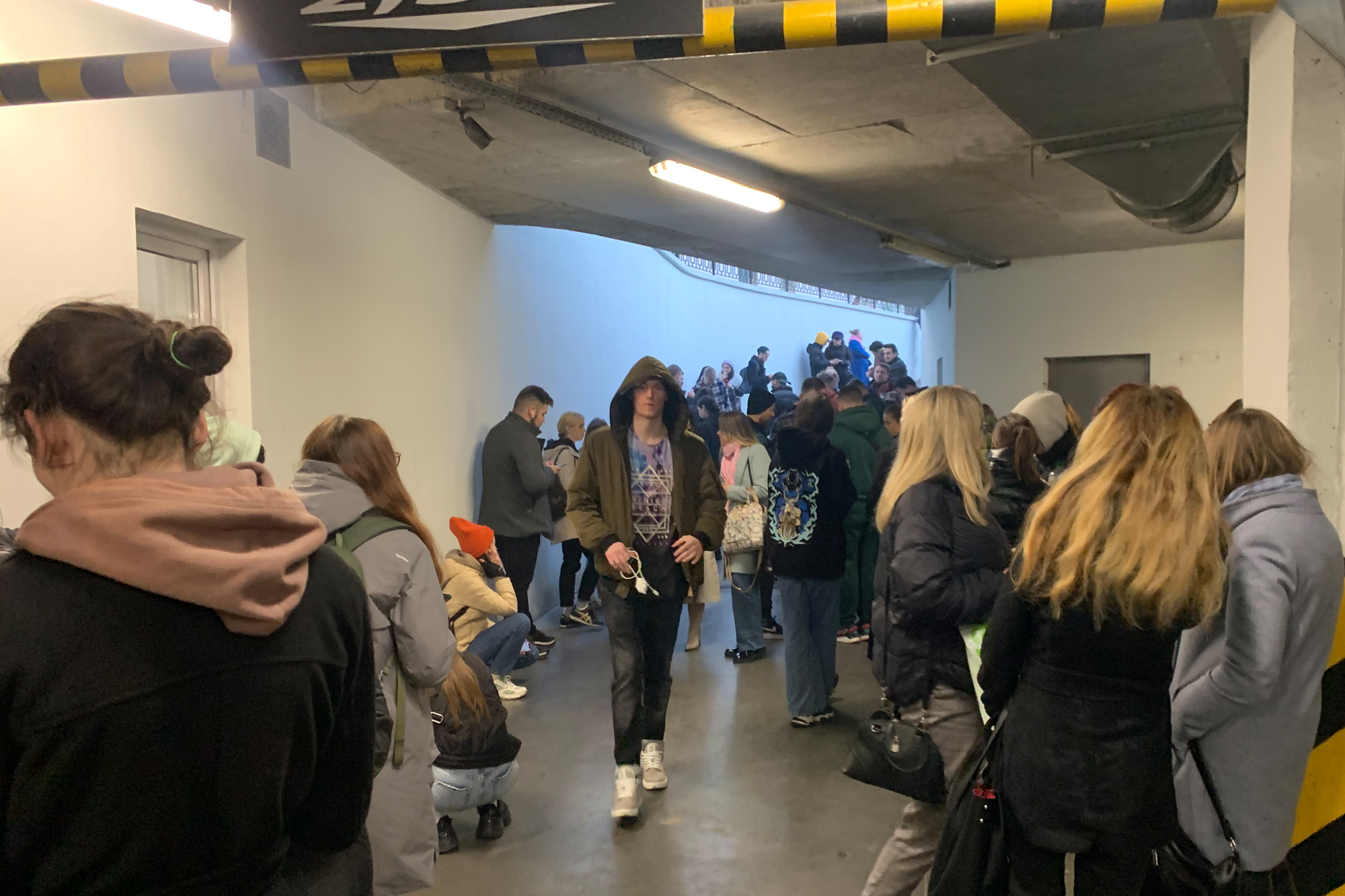 On Tuesday, more air raid sirens, this time accompanied by urgent Telegram alerts: “Missiles launched in the Donbas, find shelter immediately.” As I walked through the streets of Lviv to a nearby underground parking garage designated as a bomb shelter, many Ukrainians stood on the street, looking up and doing some mental calculations: Seek shelter or not? No one was in a hurry. By then, nine months into the war, it was common knowledge that they had at least 30 minutes to get sorted out. Lviv is far enough from eastern Ukraine that its citizens have a little time to figure out their next move.

At first, there were few people in the garage. Teenagers played card games. Nearby, office workers sat in a circle on chairs they had brought, working from their laptops. More Ukrainians trickled in. Some sat on benches they’d brought from home; others spoke on their phones; now and then, someone would get coffee at the cafe above the garage, even as the ground began to rumble and smoke filled the shelter.

Even here, as Lviv experienced its worst attacks of the war so far, there were echoes of laughter in the garage. It felt calm and safe. Or as safe as possible, given the circumstances. After the air raid alerts ended, people went above ground to discover that 80 percent of the city had been plunged into darkness. Still, Ukrainians walked the streets, stepping into bars and restaurants, showing little fear for the past three hours of their lives.

I ran into a young couple I had met a few days before, Jane and Roman, who were trying to find their friends. Cellular service was patchy, and the couple planned to wander around until they found someone they knew. We all agreed it was nice to see a familiar face after spending three hours hiding from Russia’s attacks, wondering when it would end and what awaited outside our shelters. ”We have tequila,” Roman told me. They wanted to decompress. 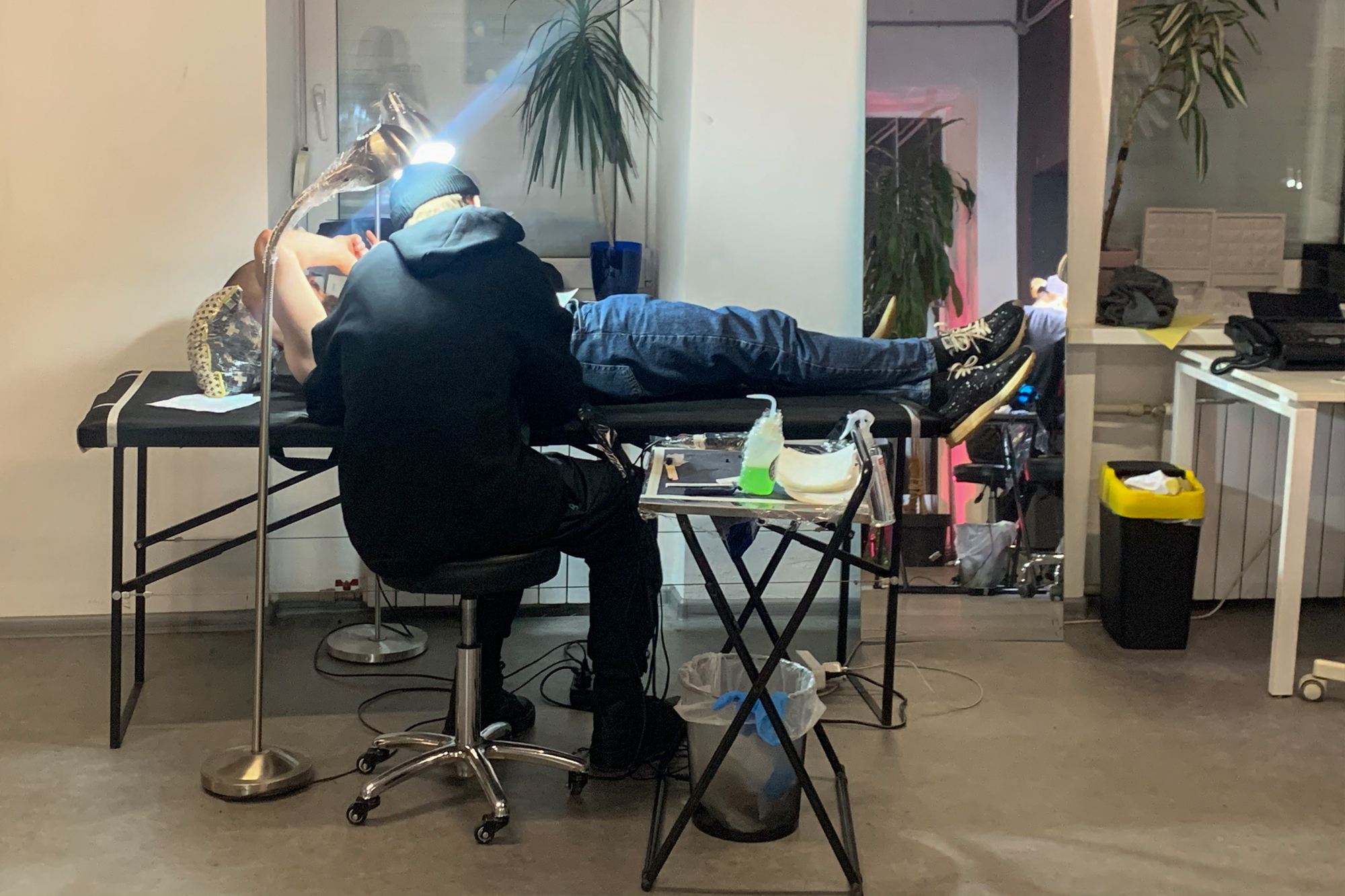 “Keep calm and carry on” doesn’t always hold, of course. The next day, my fixer, Nazar Pavlyuk, told me that a girl he had gone on a date with days earlier had been out walking when she watched a missile drop on a nearby building. She had a panic attack.

A few days later, I took a night train to Kyiv, a nine-hour trip. A missile could have hit the train at any moment. Still, the passengers seemed resigned to that possibility, trusting that they’d reach their destination safely. The two women in the small beds beneath mine slept soundly the whole night.

On November 23, I was in Kyiv when air raid sirens began once more. On Telegram, dozens of frenzied messages came in on multiple channels: “rockets are along the Dnipro [river] towards Kyiv,” “newborn baby killed in strike in Zaporizhzhia,” “repeated Explosions in Kyiv,” and “WE DO NOT LEAVE OUR SHELTERS!”

I was staying in a Soviet-era apartment with the mother of a friend of mine, Natalya Shved. Unlike in Lviv, where people have a half hour before potential attacks begin, in Kyiv, Shved told me, they have 15 minutes at the most. “What do people do if they are further away from a shelter when the sirens start?” I asked. 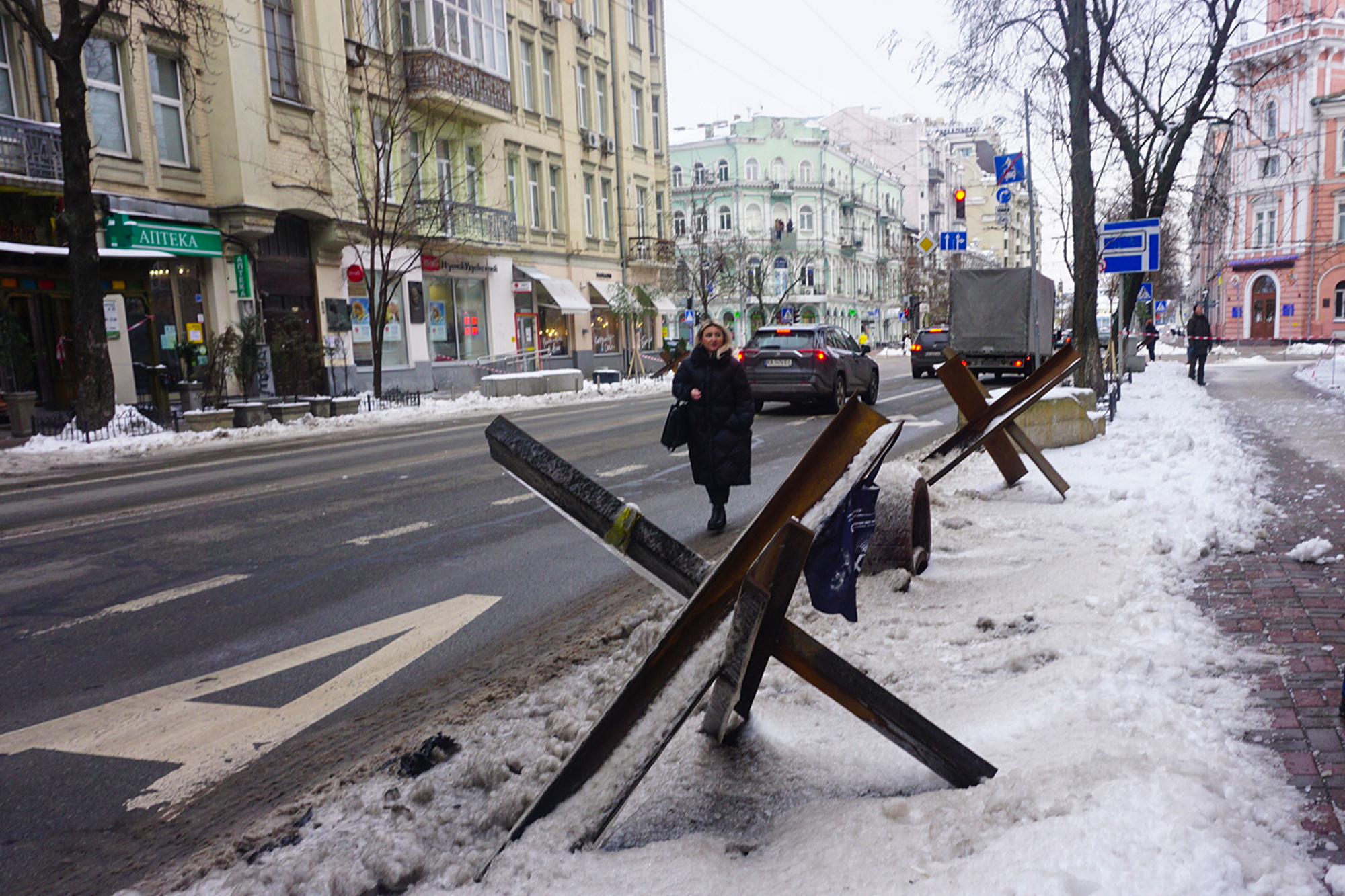 The shelling went on for three hours. No power, no water. I sat in the hallway for a while. Eventually, though, I gave in and sat in the kitchen, eating lunch while Shved took a nap.

More Telegram messages came in: A high-rise apartment, like the one I was in, had been hit by a missile. The first photo showed a body on the street, covered with a yellow cloth. It had just snowed in Kyiv, and a pool of blood reddened the ice.

I looked out the window; even at the height of the shelling, people walked, and cars drove by.

Shortly after the sirens ended, restaurants and stores once again filled. Ukrainians crowded onto public transportation. Metro stations, which still have power, looked like coffee shops. People worked on laptops, used their phones, and tucked their lives into the lull until the next attack.

As night fell, some wore headbands with flashlights to take their dogs on a walk. “Now you see, this is our reality,” Shved told me as she held a flashlight in her apartment to navigate the darkness around her.