On an episode of Succession one or two seasons ago, the family’s patriarch Logan Roy is asked what he thought of a play he’d recently seen. “Oh, you know,” he says with a shrug. “People pretending to be other people.” It was a good joke, an actor (Brian Cox) playing another person dismissing actors playing other people. But that’s the remit, a job that goes back centuries.

Lately, the remit has run into some turbulence, and the simple job of people pretending to be other people has become complicated. Casting is having an identity crisis.

A few months ago Tom Hanks apologized for a part he took back in 1993. As a straight  man he thought he shouldn’t have played a gay lawyer with AIDS in the film Philadelphia, a role for which he won the Academy Award for Best Actor.

In 2016, Jeffrey Tambor, on winning an Emmy for his portrayal of a trans woman in Transparent, announced he’d be happy if he were “the last cisgender male to play a transgender female.” (This was before he was fired from the series for alleged sexual harassment on set.)

While some straight actors have been criticized for their flamboyant and stereotyped performances playing gay characters (James Cordon’s routine in The Prom was deemed “gross and offensive, the worst gayface in a long, long time” by Erik Anderson of the Awards Watch film site), the very fact of a straight man playing a gay man has lately come under fire.

Likewise, even the casting of an able-bodied person to play the disabled Richard III has been criticized. After the disabled actor Arthur Hughes (he was born with radial dysplasia) performed the role at the Royal Shakespeare Company earlier this year, the outgoing artistic director Gregory Doran declared that henceforth, only disabled actors should be allowed to play the part.

This is what I would call doctrinaire casting, and I wonder if it isn’t a misunderstanding of the art of acting. If only gay actors can play gay characters, the logical corollary is that only straight actors can play straight characters, which leaves the LGBTQ+ community with a much smaller repertoire. Can only cannibals play Hannibal Lecter (a part which once went to the presumably non-human-flesh-eating Brian Cox)? The resume actors hand out at their auditions would have to include experience covering their hoped-for role (say, “Twelve years in Leavenworth for Armed Robbery” to play a gangster).

That’s the tangle of doctrinaire casting. But its opposite, identity-blind casting, has its own complications. This approach has been seen increasingly on stage and in film and television. Currently a Black cast is playing the formerly white family in Death of a Salesman on Broadway, a production that has brought critical acclaim. 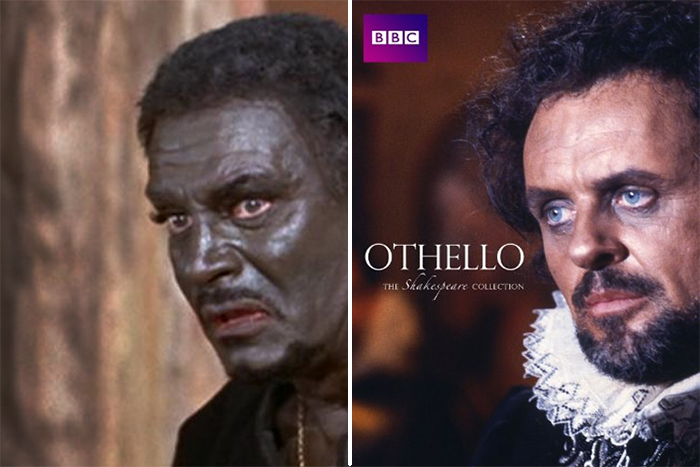 Of course colorblind casting isn’t always welcomed. In 1604, when Shakespeare first staged Othello, there were likely no actors of color available to perform it, and Desdemona would have been played by a boy, as women weren’t allowed to appear on stage. But as far back as 1965, Laurence Olivier was taken to task for “blacking up” to play the title role, and few white actors have played it since. One who did was Anthony Hopkins, in a BBC production in 1981, who played Othello in what looked like a spray tan. He of course was another non-human-flesh-eating actor to have played Hannibal Lecter, in Silence of the Lambs.

In 2017, Edward Albee’s estate was decried for denying permission for a Black actor to play the white character Nick in a production of Who’s Afraid of Virginia Woolf? Albee had had no problem with an alternate version, and in ­­­­2001 adapted his script for an all-Black production at Howard University, even attending rehearsals. But he had expressed concern that a character’s narrative could be altered by changing his or her race.

Albee’s former agent, Jonathan Lomma, who oversaw his estate after the playwright’s death in 2016, explained that if a Black actor was cast as Nick opposite a white actor playing George, in a play set on a New England college campus in the early 1960s, a racist subtext would be introduced during one of George’s second-act monologues. This and other lines would transform George and Martha into older white racists, which, Loma pointed out, “is not what Edward’s play is about.”

This is a very specific textual argument, which has a point, but colorblind casting can often enliven a text. The popular Netflix series Bridgerton, created as a sort of ersatz Jane Austen, shows a diverse cast playing upper-class aristocrats in Regency England. This candy-colored confection is already a couple of steps removed from historical drama, and it’s a fun way to introduce the period to a new generation. But a drama that purports to be more historically accurate might run into problems.

I wonder how the new Will Smith film, Emancipation, set during the Civil War, would fare with a colorblind cast. Could a Black actor play a white slave owner, or a white actor play a Black slave? Consider the case of the hit musical Hamilton; Lin-Manuel Miranda’s production cast actors of color as America’s white founding fathers, a canny way to make it appeal and feel relevant to a modern audience, as well as showcasing a lot of Black and Hispanic talent on stage. But this vision also compromised Miranda’s ability to show these historical figures as slave owners, a point he recently conceded.

Hamilton was at least not gender-blind; the men were played by men, the women by women. But a recent play in London mixed it up even further. The Doctor, adapted by the director Robert Icke from Arthur Schnitzler’s Professor Bernhardi, cast women in men’s roles, a trans actor playing a non-trans woman, white actors in Black roles, and vice versa.

The plot involved a Jewish doctor (Juliet Stevenson) refusing to allow a priest to visit a dying child, and the play explored perceptions of racism and antisemitism, both on stage and in the audience. The production was a combination of the two approaches to casting, doctrinaire and identity-blind, and it was a challenge to sort out the characters’ ethnicities and genders at the same time as assessing how various prejudices played into the plot.

It was an interesting exercise — fine if you like your plays to be interesting exercises. I found the approach sometimes obfuscated the drama, but it was a huge success, both critically and commercially, and showed that audiences are interested in addressing these vexing issues.

Acting is, by definition, a trick, and the pretense only works if the audience accepts the conceit. The idea that only a disabled actor can play Richard III is, in my estimation, absurd. The late Bernard Pomerance wrote The Elephant Man stipulating that the actor playing the extremely deformed Joseph Merrick should use no prosthetics. I was lucky enough to see David Bowie in the role, and he was very convincing. A disabled actor’s disabilities would have had to match Merrick’s unique condition to be as persuasive, and this would have gone against the design of the play anyway.

Context is everything, and there are times when identity-blind casting can obscure the narrative. But on the whole, I think any actor should be allowed to play anyone: a woman can play Hamlet, a Black actor can play George Washington, and even a white actor, without blacking up, can play Othello. As Logan Roy said, it’s what actors do: pretend to be other people.