LVIV, Ukraine — In an old tram station in Lviv, graffiti artists work in a fog of paint. They are turning SUVs into military vehicles, destined for the frontlines of Ukraine.

The artists don’t want me to reveal where we are; they are, after all, part of an ongoing military operation.

I met two of the graffiti artists, Sasha Pryimak and Nikita Oseredko, at a pub near the tram station, which is their workshop and a collection site for donations in Lviv. They were dressed in black, smears of paint covering Pryimak’s hoodie. Oseredko wore a black fringe jacket that looked like something out of the Old West. They were having a drink before they started their next project: two black SUVs that needed to go to the military as soon as possible. One was going to a base in Zaporizhzhia in the southeast, another to Kharkiv in the northeast, two regions that have seen a lot of fighting since February 24.

As we sat in the back room, their friend, Nazar Pavlyuk, asked me if I wanted a shot of vodka. Pryimak shot back, “Don’t say that.” The word, after all, is Russian. They call the liquor brought out by its Ukrainian name, “horilka.”

Pryimak and Oseredko are in their early 30s and are required to stay in Ukraine under martial law, should they be needed in the country’s military. Pryimak is from Khmelnytskyi, a 3 1/2-hour drive from Lviv. His main form of income throughout the war has been creating murals inside buildings.

Oseredko is a Lviv native. Before the war, he was a professional painter. He accepted commissions for murals from various clients, from local authorities to music festivals. Now he’s an art teacher at a private school. His students are between eight and 12, and the class is called “Graffiti.” His father and grandfather were both teachers, and his mother is an artist.

Lviv was cold the night I met the pair. It was winter; Russian forces had been attacking Ukraine’s infrastructure, and in the makeshift workshop I bundled up in all the warm clothes I brought with me to the country. The station had an eerie feel, dimly lit and vacant. Donations were scattered around: bicycles from Amsterdam, boxed cereal, children’s clothing for humanitarian aid centers, and countless other things, all intended for Ukrainians in need. In a huge back room with cracked windows was a single item: a grand piano from Austria.

This is where the artists spend countless days working on secondhand cars that are donated from organizations in Europe; volunteers drive them to the Polish-Ukrainian border, where Pryimak and Oseredko pick them up.

Pointing to the car in the back, Pryimak said, “This one was brought from my cousin. He just funded it with his friends with his own cash abroad, bought it, took [it] here, and now we are painting it.”

Oseredko has been working on the graffiti project since April, and Pryimak joined in the summer. Oseredko said it “came in a natural way. Our friends know that we are painting walls, and they say, ‘Maybe you can paint cars’?

Pryimak said he has worked on over 30 cars, and Oseredko has done at least 80. One car takes up to four hours to complete. Although the artists are not making money off their work, sometimes they ask the donors to pay them 1,000 UAH, the equivalent of $27. 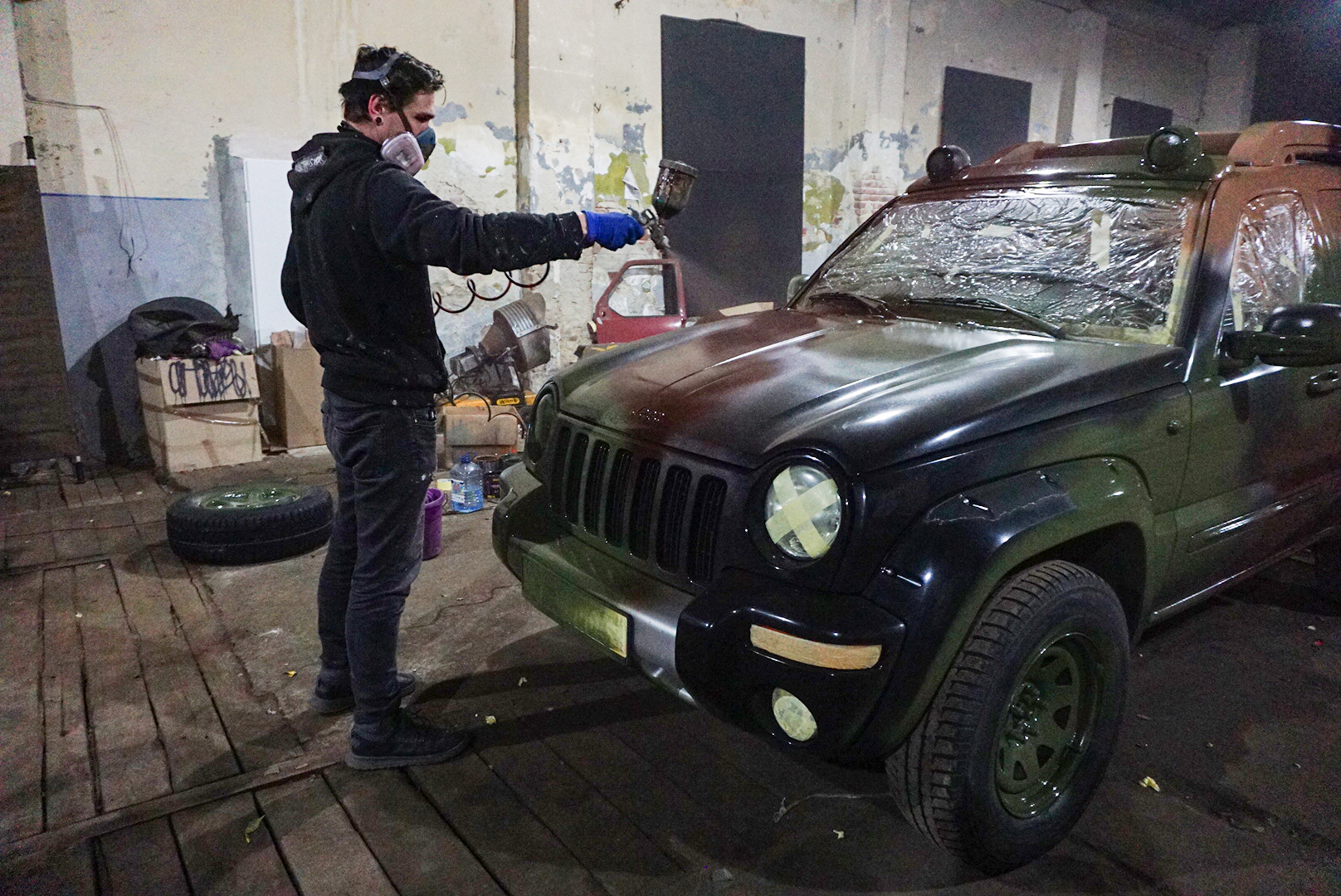 As we talked, the two men began taping plastic wrap to the windows of the cars. They then put an X of tape over the head and tail lights. Once the lights are painted and the tape removed, only a small amount of light will pass through when the lights are turned on — bright enough for soldiers to see where they’re going, but not bright enough to draw attention to the vehicle.

After the first phase was completed, Pryimak turned on a Bluetooth speaker and “Waiting Room” by Fugazi filled the station. He then moved to a collection of paint cans.

“The enamel type we are working with [doesn’t] have camo color in [the] pallet. So, to get army green, you need regular green, light brown, black, gray, chocolate brown, for specific camo shade,” said Pryimak.

He filled the paint gun, put on a gas mask and rubber gloves, and got to work. The rumble of the compressor filled the station. Pryimak was so focused on the task that he hardly spoke until the two vehicles were done. 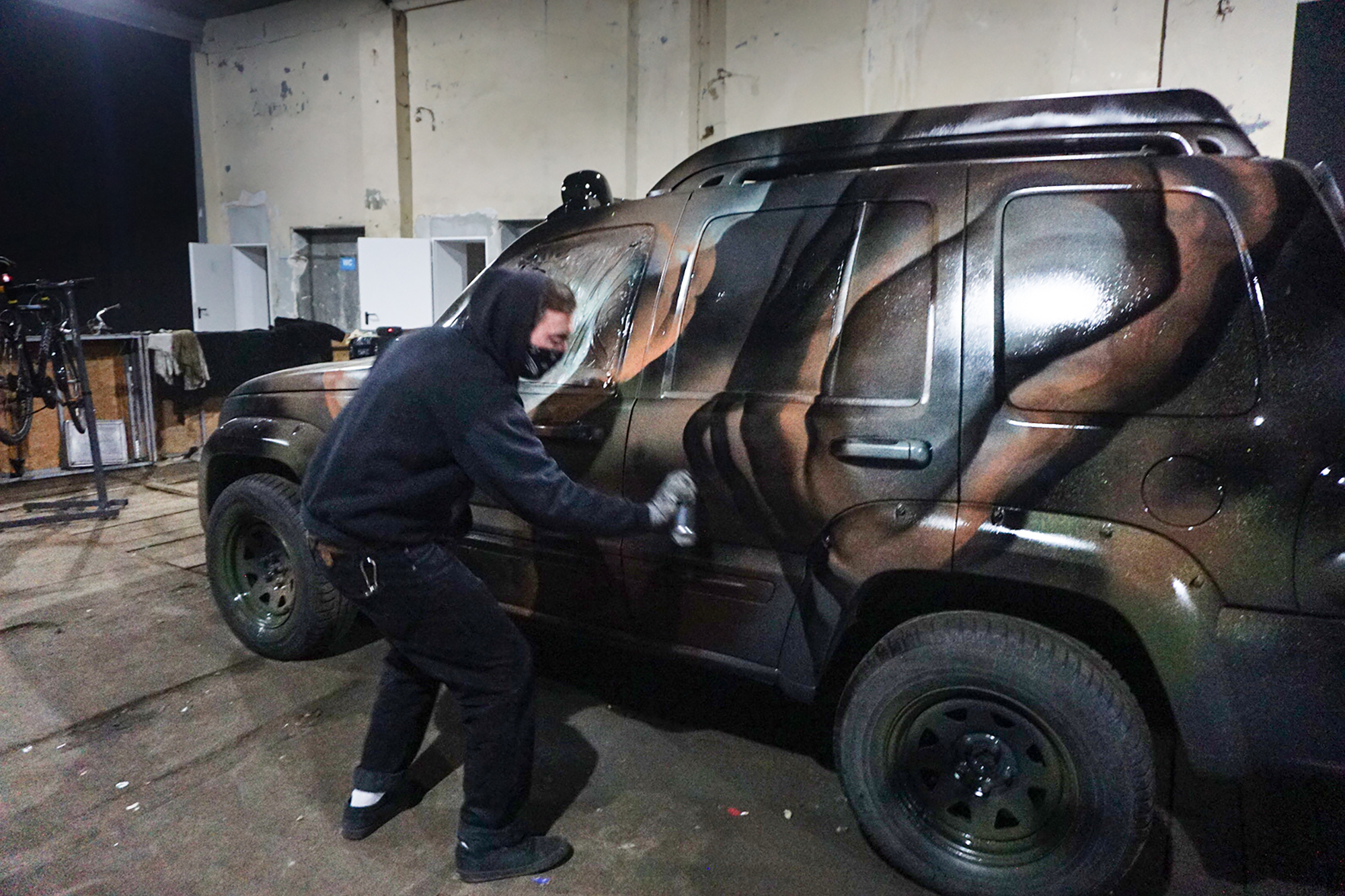 “We are doing something useful. When the war starts, [the] first two months [I] was feeling in the way where everything makes no sense, we were making art, it was just decorative, but nothing. The thing is making a difference,” said Oseredko as a fog of aerosolized paint rose.

Pryimak was in his own world. Oserdoko barely touched the car until the end, when he put a black bandana over his face and painted brown ripples around the vehicle. The cars are still an outlet for artistic expression and a functional statement of resistance to Russian forces.

As Pryimak got to work on the second car, the artists’ friends arrived at the station. Oseredko went into the desolate back room of the station, sat at the grand piano, and played a song, somber and beautiful. When he was done, he walked out of the room without a word and put the final touches on the second car.

“This is the best part,” Oseredko said as he peeled the tape off of the cars. The vehicles looked pristine.

Soon, the fog settled and the music stopped. There’s a curfew in Ukraine, and they would soon have to return home.

“This is not happening for the first time. We know what is going to be if they came here and oppress us again,” Oseredko said on our way out.

“Everybody is doing what they can.”