It’s inaccurate to say the British love queues, but they’re good at them. The police had laid out a route that covered over 10 miles, including a long, three-hour zig-zag at the end on the grounds of the Houses of Parliament which people were calling “the serpent.” By Saturday the wait time to see the queen lying in state was said to be over 20 hours. When I joined the end of the line on Friday morning at 6 a.m. it stretched as far as the HMS Belfast, a warship that saw service in World War II and is now docked near London Bridge. That made for an elegant inauguration to my endeavor, and I’d brought with me a small notebook, bottled water, two sandwiches, and three books to read — ambitious as it was near impossible to read while constantly on the move, albeit at a snail’s pace.

Over nine hours I chugged along with a good-natured crowd. One woman had come down from Cambridgeshire, an hour north of London, and been waiting since 2 a.m. She said she wanted to thank the queen on behalf of her family. A man who had come a short bus ride from Brixton was a history buff who wanted to experience a bit of history himself. The slight absurdity of the whole thing caught people’s fancy, with all sorts of justifications for undergoing the punishing trudge for hours on end. Some people had clear reasons for participating, while others may have joined just for Fear of Missing Out. It was certainly historical in the sense that the monarch doesn’t lie in state very often, and the last one to do so did so 71 years ago.

The queue inevitably took on a personality of its own, receiving various nicknames, such as the Queue-E2, the Liz Line (a nod to the recently opened tube line), and “the queue to the queue.”

It’s testament to the length of British history that comparisons were made with the medieval pilgrimage to Canterbury as chronicled in Chaucer’s Canterbury Tales (begun in 1387). As in the earlier trek, a party now set out from Southwark Cathedral, and on Thursday the Archbishop of Canterbury himself, an amiable man named Justin Welby, greeted queuers waiting in the twisty serpent at Westminster Hall. Thus church and state, monarchy and people, all cheerfully conspired to further this royal project.

Just as my group was about to enter Westminster Hall, having survived the serpentine gauntlet (think of the worst traffic jam at the DMV and multiply it by 26) and then undergone the bottleneck of security and bag check, we were waylaid when a bus of Chelsea Pensioners arrived. These are the war veterans who wear distinctive red coats and are housed at government-supported barracks in Chelsea. No one seemed to mind their special treatment. 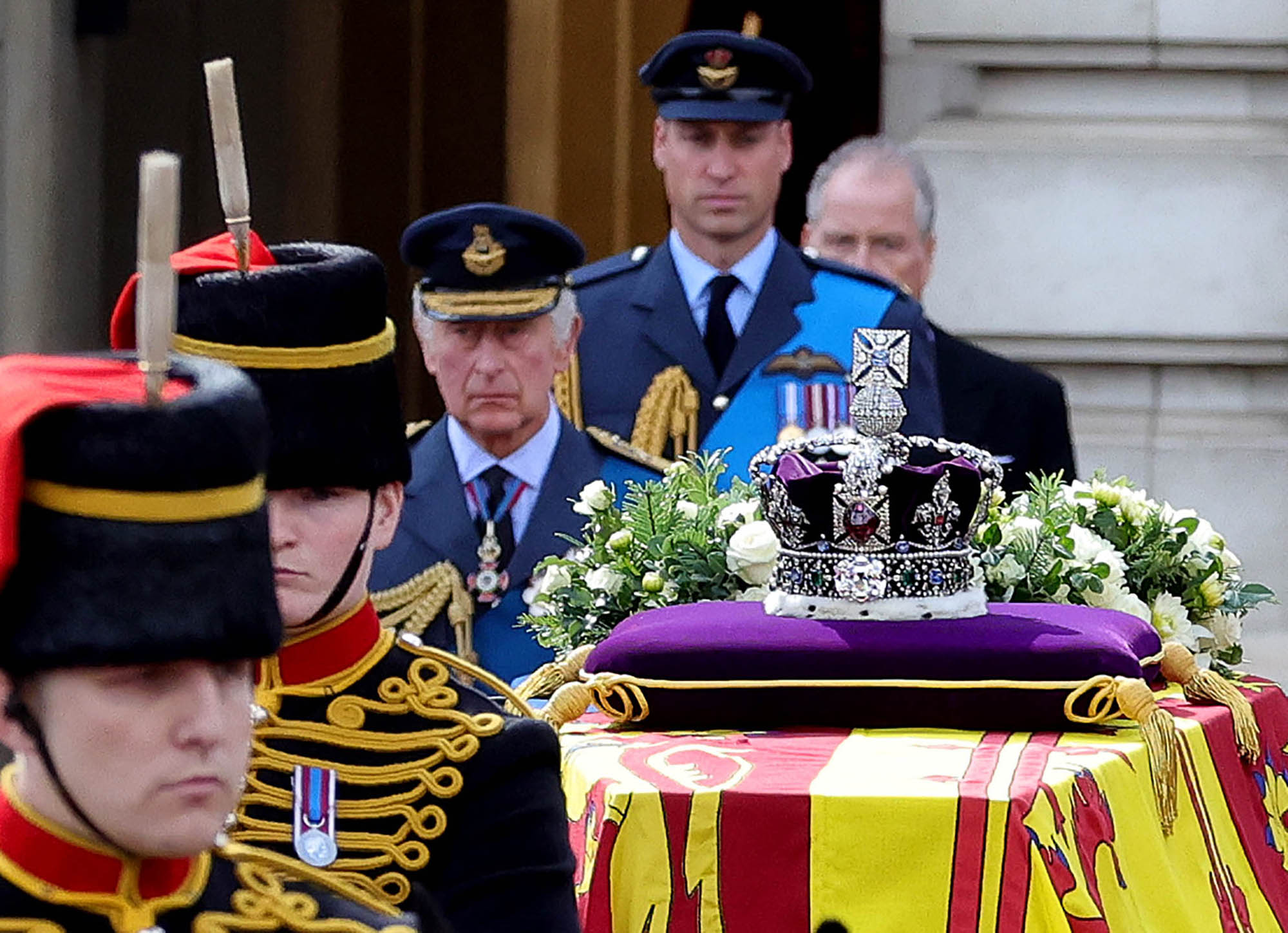 The cheeriness outside was suddenly replaced with a profound solemnity when we finally entered the hall. Descending the steps, specially carpeted to quiet our footfall, we encountered the coffin draped with the Royal Standard on which was placed the Imperial State Crown, the orb, and the sceptre, along with a wreath of flowers from her Balmoral estate. The coffin seemed to be guarded by a collection of wax figures in elaborate costume. These were representatives of His Majesty’s Body Guard of the Honourable Corps of Gentlemen at Arms, the Life Guards, the Blues and Royals, and Yeomen (I looked it up). Their uniforms included plumed helmets and cavalry swords, and ceremonial battle-axes, over 300 years old, held upside-down in deference to the occasion.

Rather than a walk-past (when visiting the Crown Jewels you’re actually standing on a moving conveyor belt), each person was allowed a moment or so to contemplate or bow, as many people did. It was just as I was paying my respects that I was asked to move on, to make way for the changing of the guard. This was an extraordinary spectacle with a new team of sentinels marching to the catafalque (the platform that held the coffin), and positioning themselves directly behind the waxworks. Then, by clockwork, the petrified figures displayed their sentience, seeming to lurch alive and step forward, as their replacements took their positions and powered down to a fugue state. The rescued team then marched, like wind-up soldiers, to a stone staircase, which they ascended in military precision and before disappearing through a door. This ceremony was repeated every 20 minutes, and whatever its origins, it was a remarkable sight.

Fifteen minutes behind me was the hero footballer David Beckham. He’d been waiting for 13 hours to pay his respects to the queen who had awarded him an OBE. Beckham is so popular here that when it was revealed a few years ago that he had cheated on his wife (the former Spice Girl Posh), the tabloid press criticized his wife. He was hailed for eschewing the celebrity on-ramp, whereas the pixieish morning TV host Holly Willoughby was rebuked for “jumping the queue” when she and her co-host were allowed to slip into the hall without waiting in the Liz Line. This is considered something of a faux pas in Britain, where rules are expected to be followed.

In the evening, some lucky visitors witnessed the ultimate royal performance piece when the four children of the queen enacted the Vigil of the Princes. This involved them all standing guard at a side of the coffin for 15 minutes, frozen in place, and was an elegant (to some, absurd) ritual that appeared ancient, but was in fact invented in 1936 for the funeral of King George V. The stagecraft on display this week has showcased the royal family’s brilliant theatrical flair, involving arcane protocols that mostly date to the Victorian period or later. In fact, the first lying-in-state at Westminster Hall dates only to the death of Prime Minister William Gladstone in 1898.

Of course not everyone is persuaded by these rites, and earlier in the week the extremely rare pockets of protest were clamped down with inelegant and undue force. A man who heckled Prince Andrew while he walked in a procession (“You’re a sick old man!”) was set upon by bystanders before being arrested by police. Another protester was taken into custody for holding up a sign saying “Not My King.” Americans often forget that there isn’t an iron-clad right to free speech here, only a “right to freedom of expression” that “may be subject to formalities, conditions, restrictions or penalties as are prescribed by law.” The new Conservative government wants to further suppress expressions of dissent.

It’s conjecture to assume the queen would have frowned upon these police actions. But it was always conjecture when it came to the queen’s thoughts, and that was partly why she remained so popular. She was above politics, but practically drowning in ceremony; her every appearance was an occasion. Her death is no exception, with untold thousands glad to participate in this grand final performance, playing their bit parts in her positively final appearance. Going all the way back to 1952, it’s been an amazing show.