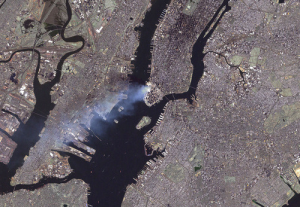 Worth Noting: September 11th From Space, Supercomputer Predicts The Future, And A Unique Solution To Homelessness

Two Far Out Views Of The September 11th Attacks The tenth anniversary of the 9/11 attacks brought extensive coverage of the events of that day in words and pictures across all media outlets. Some of the most astonishing images came from the only American not physically on the planet at the time of the attacks. Astronaut Frank Culbertson’s footage from the International Space Station at an altitude of 250 miles shows the extent of the devastation as smoke clouds drift out across the North Atlantic—24+ hours AFTER the event. Moving from the long view to the incredibly shortsighted, listen (if you can stand it) to Oklahoma State Rep. Sally Kern explain how the gay men and women who were murdered on September 11th were actually a greater threat to their country than the terrorists that killed them.

Become A Clairvoyant: Read A LOT Of News

One way to foresee future threats from terrorists (or gays!) could be through the use of incredibly powerful computers. Nautilus is a supercomputer that is able to predict the future by – wait for it – reading the news. By scanning through 100 million news reports of the last 25 years, it was able to predict the Arab Spring and the general whereabouts of Osama Bin Laden, albeit retrospectively. I wonder what would happen if we all paid such close attention to the news of the day?

How To Make The Best Of A Bad Situation With more members of the middle-class joining the ranks of the homeless, one man has come up with a peculiar yet pragmatic solution. Artist Gregory Kloehn has transformed a dumpster into a home, complete with bed, kitchen, running water, electricity, and a toilet. And you thought your studio apartment was cramped…