… What’s the Deal With Conservative Comedy?

You don’t have to be a comedy geek to know that there’s not much of a conservative presence in late-night talk shows. It’s certainly not for lack of trying, though — over the years, there have been multiple attempts on the right to replicate the success of left-leaning critical darlings like the Daily Show or Last Week Tonight with programs like Fox News’s 1/2 Hour News Hour, the YouTube-hosted NewsBusted, and the nationally-syndicated Flipside.

Many of these shows have met the same fate: bad reviews from critics, mediocre ratings, and eventually, cancellation. But that hasn’t discouraged subsequent attempts.

In April, the latest contender for right-wing late-night debuted on Fox News: Gutfeld! (Much like the 2020 “Jeb!” campaign of yore, the exclamation point itself is part of the name.)

Unlike its predecessors, Gutfeld! has actually been giving established political comedians a run for their money. The premiere reached nearly 1.7 million viewers, beating the year-to-date average of all other late-night shows except for the Late Show with Stephen Colbert. On May 6, Fox Corp CEO Lachlan Murdoch boasted that Nielsen ratings showed Gutfeld! was roughly on par with Jimmy Kimmel Live, having already surpassed the Tonight Show Starring Jimmy Fallon. With the threat of the two Jimmys already neutralized, it doesn’t seem like a stretch to think that Gutfeld! might finally break conservative late night shows’ Curse of the Bambino.

What it does have in common with its conservative forebearers, though, is critics’ contempt. Variety called Gutfeld! “nasty and unappealing,” while the New Republic posited that it may be the worst show on television.

It’s a problem that has plagued conservative comedians for years: Most critics just don’t find them to be very funny. Conservatives attribute this to the mainstream media’s liberal bias.

“If you’re coming from a certain political perspective, you can’t joke about some things,” said Mike Loftus, a conservative comedian and television writer who previously hosted the Flipside, a satirical, conservative talk show in the vein of the Daily Show. “[They’ll say] ‘That’s hate speech, that’s unsettling’… It’s beyond crazy.”

But many progressive and left-leaning comedians believe shows like these legitimately merit the comedic critique they receive.

“Good comedy just is not tethered to the conservative mindset,” said Mike MacRae, a stand-up comedian known for his work on the left-and-proud Jimmy Dore Show. “I think conservatism inherently kind of forces people to think in alignment with power, familiarity, traditionalism, and safety, whereas jokes and comedy are all about turning those things on their head.”

You can’t help but think: Which is it really? Is it liberal bias that has doomed these shows, or something essential to the very nature of comedy itself?

Given today’s increased polarization, conservatives contend that it’s not that right-leaning comedy doesn’t work, it’s just that the liberal entertainment industry won’t give it a chance.

Loftus told me he saw this firsthand when he was part of a team pitching a conservative satire show to networks and streaming services.

This doesn’t quite track for Alison Dagnes, an author and professor of political science at Shippensburg University who studies political media and humor.

“Conservatives have an argument that Hollywood serves as a gatekeeper to them. And I sort of buy it, sort of don’t,” Dagnes said. “These days, if you have a good YouTube or Instagram or whatever, you can get seen.”

At the same time, she said, conservative comedians like Nick Di Paolo — known for his appearances on Comedy Central roasts and the Howard Stern Show, as well as having his SiriusXM show cancelled after an incendiary tweet that jokingly called for school shooters to target university faculty lounges — “had enough receipts to show that doors have been closed because of [their] political beliefs.”

The left-leaning political climate in the entertainment biz could certainly have a chilling effect on conservative voices, said Andrew Heaton, an independent-leaning-libertarian comedian who hosts a political podcast called the Political Orphanage for people who, like him, aren’t fully on board with either Democrats or Republicans.

“I don’t know that they automatically blackball you, but I think that if I were applying for a job at the Daily Show or anywhere like that, I am fairly confident that they would at least have a conversation,” he said. “I would be very, very surprised right now if you were [openly] conservative or libertarian, and the writers’ room didn’t debate that.”

“Where is AOC now?” a video by Comedian Michael Loftus

Dagnes believes geography may play a role as well.

In 2018, Pew Research Center found that twice as many urban voters identified or leaned Democratic (62 percent) than Republican (31 percent). In rural areas, meanwhile, Republicans had a net advantage of 16 percentage points among voters. Without spending time in cities, where comedy scenes tend to be, it’s hard to climb the ladder, Dagnes said.

And even conservatives who are in a city might find it hard to ascend.

“Comedy night clubs tend to be in areas where there are enough people to sustain them, so that means more of an urbanized clientele, more liberal,” said Matt Sheffield, a former conservative activist and media personality who produced the right-wing political satire shows NewsBusted and the Flipside. “The audience isn’t going to laugh at things making fun of them.”

From Comedy to Crusade

It’s worth noting that political comedy wasn’t always as polarized as it is now. Things have changed tremendously, even in the last 10 years, according to Dagnes.

When she was initially writing her 2012 book, A Conservative Walks Into a Bar: The Politics of Political Humor, “Late night was a place where everybody could go at the end of the day,” Dagnes said. “I interviewed someone who was writing for Jay Leno at the time, and he said ‘You know, Jay just wants to get one more viewer.’ So, if he insults a Republican, he’s going to make a joke about a Democrat, and vice versa.”

But that changed significantly after (what else?) the 2016 election.

“Late-night hosts felt that they had fallen down on the job, that they had not taken Trump seriously enough,” Dagnes said. “His election was, they felt, in some ways their fault.”

Comedians like Colbert began to trade their “get a load of this guy” schtick for serious, sometimes scathing, criticism. And they were often rewarded for it in the ratings.

With a divisive new president in office, the superheated rhetoric drove people further to their respective political corners.

“[Everybody’s] in this defensive crouch, just waiting for somebody to take issue with their team” — and when they do, they’ll react with more hostility, Dagnes said.

“A lot of people that are in comedy view anybody they disagree with as sort of an existential threat,” agreed Heaton. “Trump really exacerbated all of that, to the point where now, there’s much more reticence to laugh at our side, whatever side we’re on.”

In this climate, it stands to reason that conservative humor would begin to fall out of favor among an increasingly liberal population — but that’s far from the whole story.

What’s Funny About a Party Line?

“The Daily Show is liberal, and Bill Maher is liberal, but they don’t bill themselves as that. They never say, ‘Hey, we’re doing liberal comedy over here,’ whereas conservative comedy brands itself like that as a way to get people to watch,” left-leaning comedian MacRae said. While the Daily Show appears on Comedy Central — a network whose raison d’être is making people laugh — Gutfeld! appears on Fox News, a cable news channel whose bread and butter has become riling people up, he pointed out.

Ben Kissel, host of the political humor podcast Abe Lincoln’s Top Hat and a former producer of Red Eye, a satirical late-night show on Fox News that featured Greg Gutfeld, noted that the network’s comedy has shifted to the right over the years. Red Eye, as opposed to Gutfeld!,  “wasn’t so based in modern conservative politics. It was much more like ‘Whatever, we’re just having fun at three o’clock in the morning,’” Kissel said.

Conservative comedy today relies more on outrage than humor, according to Sheffield, the former media personality and producer of right-wing comedy. “When you watch these people who are styled as conservative comedians, they’re just pissed off all the time,” he explained.

Another way Sheffield believes partisanship is holding back conservative comedy is that it leaves no room for criticism — or even self-deprecation.

“Left-wing political comedy is willing to criticize Democrats. They may not do it as much as they criticize Republicans, but they still do it. Whereas if you look at conservative comedy, you can’t make fun of Trump for his delusion and lies about the election,” he said.

That being said, left-wingers admit they’re starting to see this on their own side as well.

“It used to be that the sacred cows were always on the right — you can’t talk about religion, you can’t say anything bad about America, those types of things,” MacRae said. “Now, that type of thinking is endemic on the far left as well.”

And this isn’t terribly surprising. More and more, Dagnes said, Americans turn to political comedy for validation rather than to laugh. She pointed to her friend and colleague Dannagal Goldthwaite Young’s work, whose 2019 book Irony and Outrage: The Polarized Landscape of Rage, Fear, and Laughter in the United States supports this idea.

“Televised political satire and conservative political opinion programming, while not the same, serve similar needs for their audiences,” Goldthwaite Young writes. “[They] look different from each other due in large part to the different psychological frameworks of liberalism and conservatism, which account for distinct psychological traits and aesthetic preferences among their creators and audiences.”

Put simply, both sides seek entertainment that provokes anger and confirms their worldview — but while liberals will turn to John Oliver, conservatives turn to Tucker Carlson. 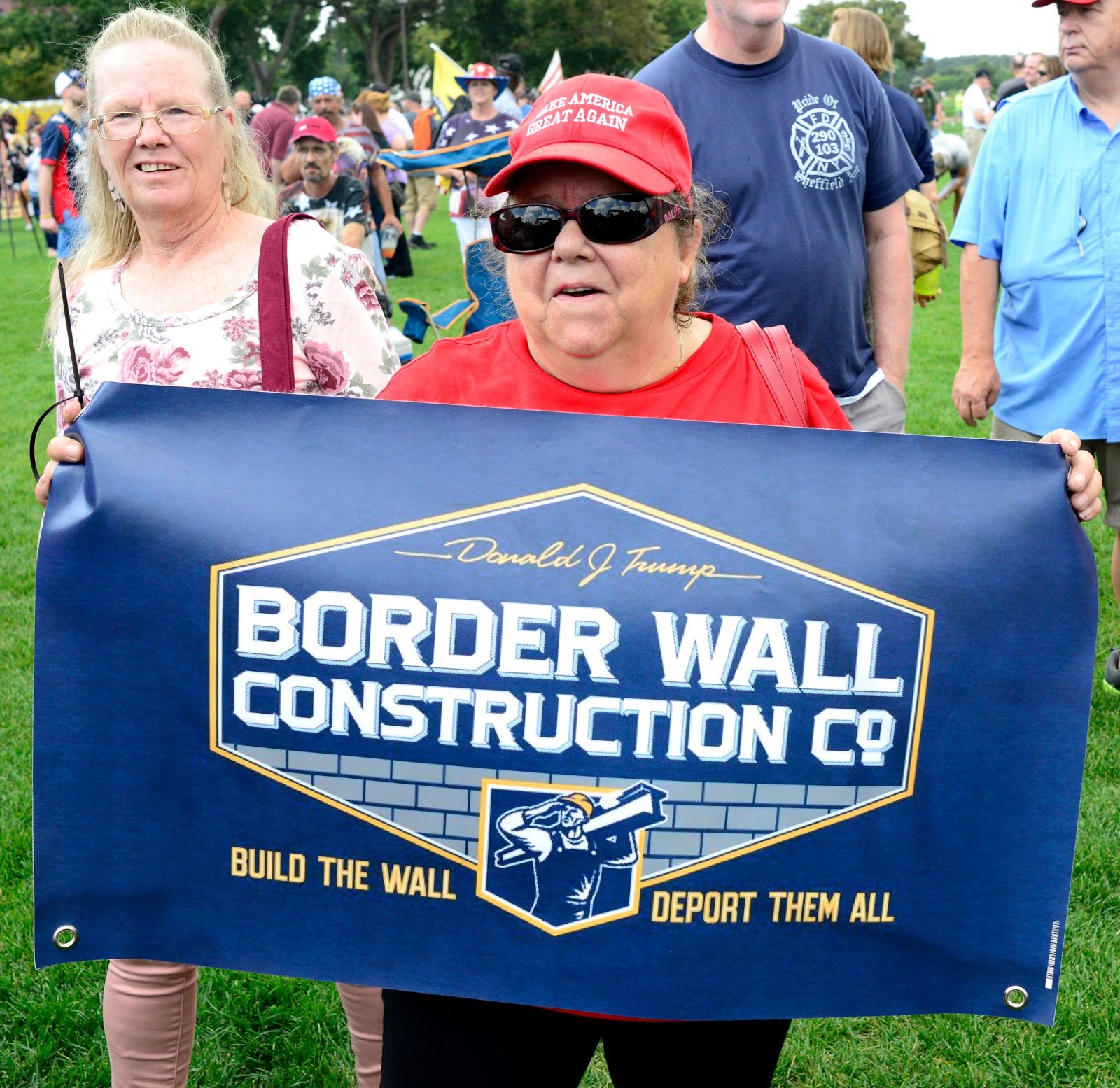 Right-Wing Comedy as a Cure for Polarization(?)

Humor, as any comedian will tell you, is incredibly subjective.

To anyone who’s not a liberal, left-wing comedy often comes off as hostile and restrictive in the topics it covers.

“[Left-wing comedians] can say the most horrible things. They don’t even need punchlines anymore,” said conservative comedian Loftus. “And then when you try to make the equal and opposite joke from a different point of view, you get in a lot of trouble,” which then results in self-censorship and sometimes deplatforming.

And to anyone who’s not a conservative, right-wing comedy often just seems mean.

“I think that there’s a lot of pointing at something aberrant,” independent-leaning libertarian comedian Heaton said, whether it’s an ethnic minority, transgender person, or someone who just doesn’t fit into a certain norm. Conservative comedy, he said, tends to draw attention to violations of traditional norms while liberal comedians clown on the system that created them.

It’s hard to predict whether conservative comedy like this has any long-term future in today’s more socially conscious environment — but as Gutfeld! has proven so far, there’s certainly an appetite for it at the moment. And, for what it’s worth, some comedians think that more right-wing humor could even dial down the acrimony in today’s political climate.

“I’m actually rooting for conservative comedy to find its wings,” said self-proclaimed social justice comedian Negin Farsad. “It might help [conservatives] take their mind off of the constant angering that Fox is trying to do with its television base.”