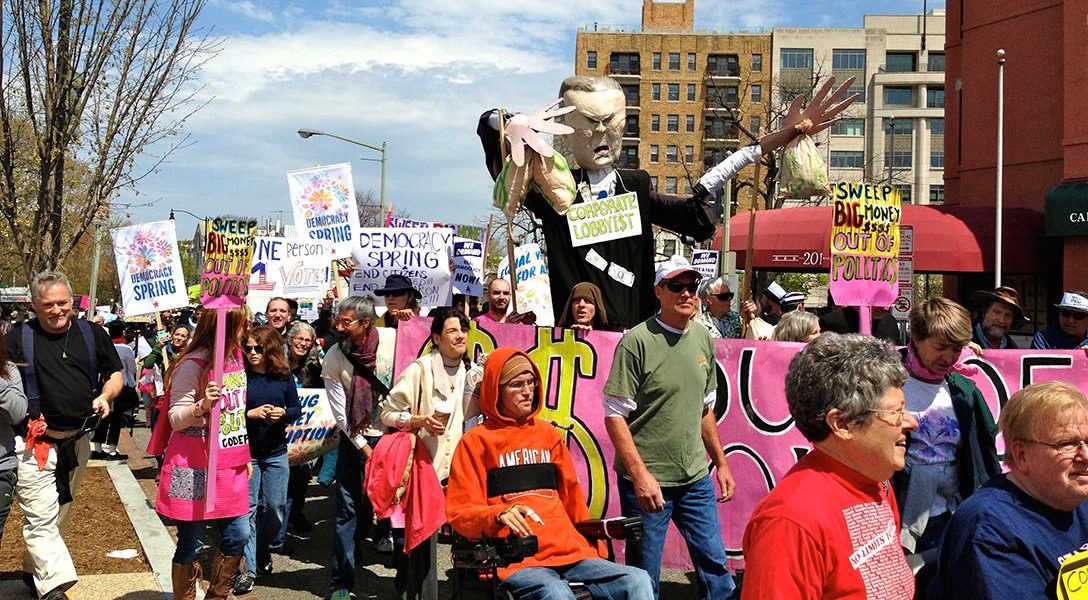 Every tiny detail of the presidential contest, it seems, dominates corporate media front pages and newscasts. Who called whom a liar, which poll moved an inch, what did Donald Trump just tweet, and what was Hillary wearing?

But an ongoing story about the fight for the very soul of that democracy has been given short shrift.

More than 5,000 activists descended on the Capitol from across the country, including hundreds who had marched there from Philadelphia, the birthplace of American democracy.  It was a campaign that recalled the non-violent civil rights protests of the 1960s.

On April 12, largely unnoticed by the corporate media, they began a weeklong series of rallies protesting money in politics and calling for a restoration of the sanctity of the election process.

In a show of civil disobedience designed to raise awareness of the devastating influence of money in politics, more than 1,400 people got themselves arrested outside the Capitol.

Notwithstanding the timeliness of the event — and its direct relevance to the presidential race  — coverage has been miniscule.  An analysis by the advocacy group Media Matters has found that the major news networks between April 11 and April 18 devoted to the protests a grand total of  … 29 seconds, and only on PBS.

The only time the media seemed to find anything worth reporting was when celebrities were taken away in shackles. Actress Rosario Dawson was arrested Friday, April 15. Vermont’s ice cream royalty, Ben Cohen and Jerry Greenfield, were arrested as part of Democracy Awakening on Monday.

“It’s always exciting when celebrities really get into this kind of thing,” said Cassady Sharp, a Greenpeace employee who has been working as a spokesperson for Democracy Awakening, one of the two groups that organized the protests, along with Democracy Spring. “So it doesn’t totally surprise me that people were really pumped to see the Ben & Jerry’s co-founders get arrested. I certainly hope that people realize that they had hundreds of people behind them.”

At the Heart of the Protest: Campaign Finance

The organizers of the event knew that getting front-page coverage was going to be an uphill battle.

“Campaign finance is not the sexiest of all issues,” Peter Callahan, the communications director for Democracy Spring, told WhoWhatWhy. Though polls have shown overwhelming majorities of Americans want to get money out of politics, they also rarely list it as one of the most important issues for voters.

“Other people have lots of issues that are near and dear to their hearts,” says Callahan.

But Callahan and the organizers of Democracy Spring and Democracy Awakening see campaign finance as the issue that encompasses all other issues. They point to Black Lives Matter, and environmental activists — as well as advocacy groups from the right — who see getting money out of politics as the first step in enacting change.

The protests received endorsements and assistance from over 300 different advocacy groups, including People For The American Way, Greenpeace and the NAACP.

“Our message is that 1) systemic corruption is at the root of many issues, 2) there are existing solutions that congress can implement today, and 3) the way to get there is nonviolent civil disobedience,” Ardon Shorr, the Pittsburgh organizer for Democracy Spring, told WhoWhatWhy.

Shorr was one of the hundreds arrested on the first day of protests. The number of arrests was so high the police ran out of room and had to put the protesters in overflow warehouses. Organizers claim it was the largest act of civil disobedience at the Capitol in history.

For the people pushing for change, these protests are just the beginning.

“People are waking up to the fact that there are solutions,” Rio Tazelwell told WhoWhatWhy. Tazelwell is the manager for the Government By The People Campaign at People For The American Way, and an organizer for Democracy Awakening. “We want to keep pushing at the national level, but then we also want to plug people into campaigns that are already underway at the local and state level, particularly ballot initiatives and some legislative proposals.”

One of their stated goals is a 28th amendment to the Constitution guaranteeing the right to fair elections. The activists see history on their side.

“No movement has failed after mobilizing 3.5 percent of a population,” Shorr said, referring to the research of the political scientist Erica Chenoweth. “That’s a lot of people, but it’s really a tiny minority. This is achievable.”

“Being willing to get arrested creates a moral dilemma for Congress: Either side with the people, or side with big corporate interests and continue to send hundreds of patriotic Americans to jail every day.”