The World’s Most Dangerous Headline

In September, the world was introduced to a threat so subtle, so insidious, that it had hurt almost no one.

It was the cassowaries. The big birds — flightless, but heavily armed — had come for us at last. They attacked us where we least expected them: in the media.

The cassowaries came disguised as science. Researchers from Penn State, the Smithsonian, and universities in the United Kingdom, Australia, and New Zealand analyzed ancient eggshells collected from encampments in the rainforests of Papua New Guinea. They concluded, based on burn marks and the incubation stages of the eggs, that humans nearly 18,000 years ago were harvesting the eggs and possibly even raising the birds for domestication. There are a few interesting approaches to a story here: that cassowaries were domesticated maybe 10,000 years before the chicken, or that ancient humans had such a sophisticated relationship to environmental stewardship.

“The World’s Deadliest Bird Was Raised by People 18,000 Years Ago” reported The New York Times. CNN was nearly identical: “World’s most dangerous bird raised by humans 18,000 years ago, study suggests.” Discovery was more folksy — “The World’s Deadliest Bird Used to be a Pet” — while Modern Farmer leaned into its agricultural bona fides with “This Enormous, Deadly Bird Might Have Been Domesticated Before the Chicken.”

Somewhere between prehistoric egg hunts and modern clickbait, the cassowary got a reputation. More than one story opens with a riff on the Times’s lede: “The southern cassowary is often called the world’s most dangerous bird” with “four-inch, velociraptor-like talons.” It’s “irritable,” it’s “aggressive,” and writers are particularly fond of mentioning that it’ll slice your soft middle parts open.

(A cassowary can’t even wander into a room without name-calling, as the Daily Mail makes clear with a recent headline: “World’s most dangerous bird stuns Aussie carpenter after strolling into his shed.”)

Everywhere you look, it’s “world’s deadliest,” or “world’s most dangerous.” The cassowary’s unwanted title is a peach of an example of the journalistic principle “If it bleeds, it leads.” But the mandate that still drives so much of journalism is a leftover from our evolutionary past — a feature that once was good at keeping us alive, but now, in the overstimulated modern world, just kind of gets in the way of what’s really true.

“I think, in some cases, the writers that I’ve spoken to have been very receptive to what I’m saying about indigenous knowledge, and why that’s important here,” said Kristina Douglass, an archeologist at Penn State and the lead author on the cassowary study.

She braved the interview circuit to promote her work, and it’s clear from the resulting stories that there’s an internal tension between the writer’s desire to convey the implications of that research and the publication’s need to push out a story that will attract the most eyeballs. “The headlines that are sort of clickbait are what ended up appearing, because editors and others need people to click on the story,” she said.

That means leaning into pop culture references, even if they don’t make any sense.

“Everybody’s obsessed with the connections between cassowaries and dinosaurs — to be clear, cassowaries are not dinosaurs,” she said. (The Daily Mail begs to differ.) “But the way the birds look just made people run with this idea that people domesticated dinosaur birds 18,000 years ago, and there’s so many aspects of that statement that are not accurate, and are not things that we claimed in the paper.”

“Life, ah, finds a way.” Yes and so too does journalism, even if it has to shoehorn billion-dollar Hollywood franchises into a story about indigenous animal husbandry.

“I do think that the paper touches on a nerve with people in terms of thinking about people’s relationship with quote-unquote ‘dangerous animals,’” Douglass said. “We just have this fascination, I think, as humans, with the idea that there are aspects of ‘wilderness’ — again, quote-unquote, because I’m an archeologist and I think that is a loaded term — but a ‘wilderness’ that we somehow conquered, and that somehow that’s what makes us fundamentally human.”

This is an obsession shared by us journalists, who are also, more or less, fundamentally human. And because of this, we sometimes present a world that can seem like it wants to, well, slice our soft middle parts open. 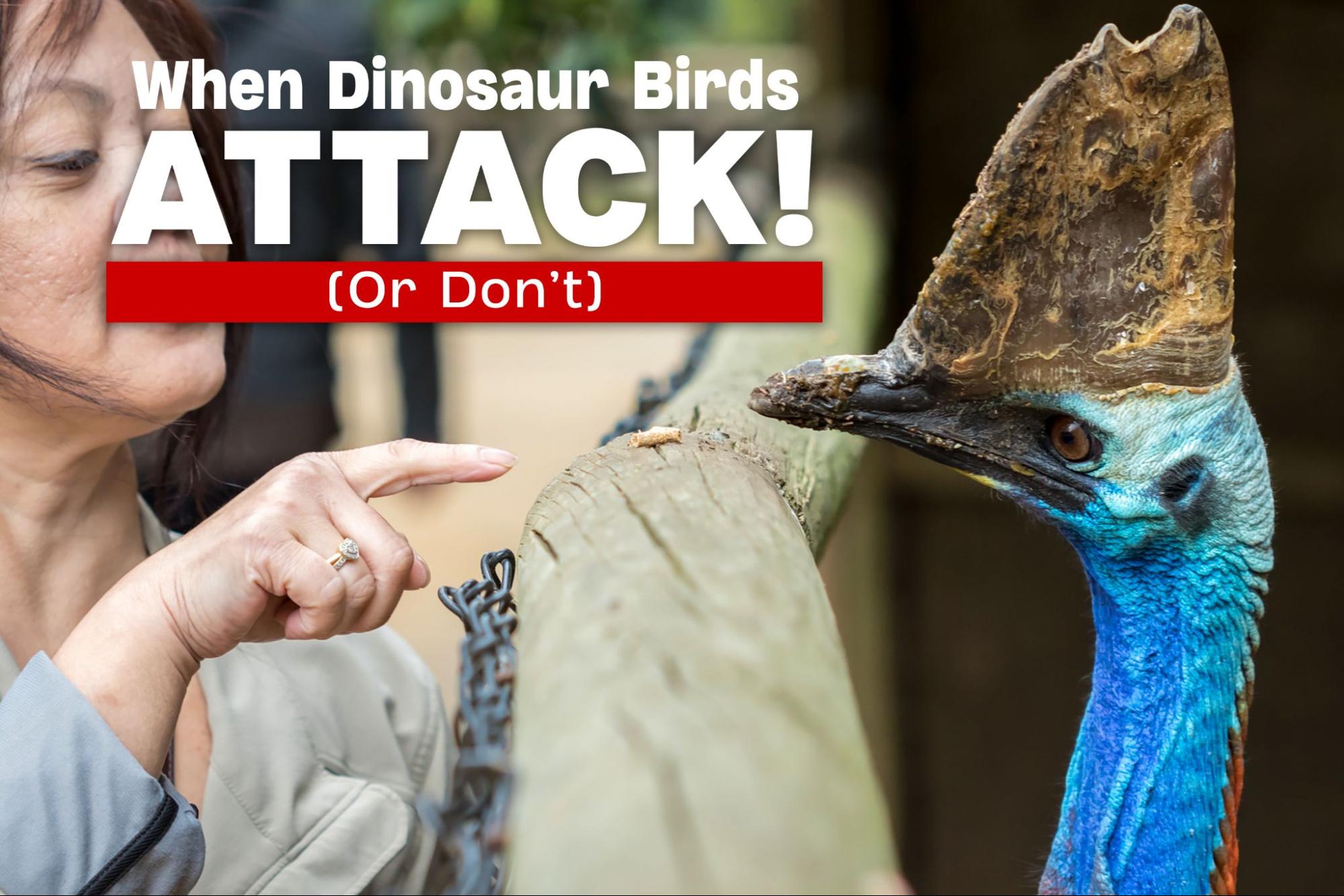 Ancient News You Can Use

Long before we were modern humans — before we were making cassowary omelets — we were already headline editors, wired to look for the primitive version of “If it bleeds, it leads.” (In this case: “If it makes you bleed, or better yet, might eviscerate you, it leads.”)

Our brains evolved to alert us to saber-toothed tigers in the weeds, but as noted futurist Peter H. Diamandis points out, today the brain “calls our attention to all the negative stories, and if you see a thousand stories you’re going to focus on the negative ones, and the media takes advantage of this.”

That’s negativity bias, which is used by the news media, and even better by social media, to hack our attention. As one study puts it, “Negative stimuli are hypothesized to carry greater informational value than positive stimuli, and to thus require greater attention and cognitive processing.” The news media is made of people talking to other people, so the same ancient rules still apply, and a story will be “stickier” if the protagonist is a murderous, feathery dinosaur bird.

And the cassowary checks that ancient box in the brain, even if the reality doesn’t quite back it up.

The *Real* Deadliest Bird… Is Us, Basically

The cassowary is “often called,” or “best known for a reputation as,” the world’s deadliest bird, though I couldn’t find a single story that adequately qualified that description. A few sources mention that soldiers stationed in New Guinea during World War II were warned about them. The august San Diego Zoo exclaims only that “the cassowary is rightfully considered the most dangerous bird in the world!” It’s a tautology. Writers used the title because the title has been used.

The closest I could find to a justification was in a much-cited 1999 survey of cassowary attacks in the Journal of Zoology that tells us: “Cassowaries and ostriches are the only birds worldwide that have caused human deaths by physical attack.”

The first problem is the ostrich, a bird nobody, not even the click-hungriest headline editor, would think to call “one of the deadliest birds in the world.” That aside, it’s a good start. It’s something. Let’s see.

Author Christopher P. Kofron looked at 221 cassowary attacks, 150 of which were against humans. The majority of attacks resulted from people messing with the birds, or feeding them, thereby changing their natural behavior. Kofron lays out his conclusion thusly: “Although cassowaries should not be considered dangerous, they can cause serious injuries.” He counted seven injuries, total.

But how many recorded deaths does it take to be the deadliest bird? Two, apparently — in a hundred years. One in 2019 and the other way back in 1926, a kid who was trying to kill a cassowary with a stick.

So, okay, sure, that’s not nothing, that’s technically “deadly,” but consider this: At least two people died from salmonella poisoning related to backyard poultry — and that was just in the last year.

The world’s deadliest bird? The chicken, living among us all this time, plotting. How could we miss it? Once again, the brain betrayed us.

As psychologist Steven Pinker writes, the mind overestimates how often certain things happen if they are “recent, vivid, gory, distinctive, or upsetting.” In the media, that translates to the danger of the less-common: “Plane crashes always make the news, but car crashes, which kill far more people, almost never do. Not surprisingly, many people have a fear of flying, but almost no one has a fear of driving.”

Along these lines, chickens are certainly the world’s most dangerous bird in the context of the environmental damage done by industrialized farming, from food poisoning and novel viruses to carbon emissions and rivers made toxic. But there you have the other problem: of a danger too large to be easily comprehended by a species still essentially wired for threats the size and shape of a saber-toothed tiger. We conquer the wilderness, but the domesticated conquers us.

But — and this is the real takeaway of the Penn State study — it doesn’t have to be this way.

“The World’s Most Dangerous World”

“We have this idea that people in their organization of new places, new islands, new habitats, and landscapes always leads to degradation and extinction,” said Douglass. “And that, honestly, is a narrative that erases a lot of indigenous history and indigenous peoples’ contributions to stewarding landscapes over millennia.”

The story is not that we must conquer nature before it kills us, but that we can recognize that it’s not out to get us, and that there’s a way to use the environment without destroying it (or ourselves). But no reporter wants to pitch a story about ancient eggs laid by a mere tarted-up emu, and no editor wants to run a headline about the “the world’s most dangerous bird, behind the chicken.”

Douglass said that colonization and a focus on industrialized development has meant that we ignore some of the lessons offered by indigenous cultures, in favor of the “wilderness” narrative that pits us against the world.

“Especially as we enter into a future of intensifying climate change where all of these landscapes are going to be in more precarious situations and species are going to be more vulnerable, we really need to, I think, center and celebrate indigenous knowledge and indigenous stewardship,” she said.

“We’re really trying to speak to the fact that communities in all kinds of environments, at all different periods in our human history, have had this incredible knowledge that they use to effectively sustain their livelihood. And that, in turn, also has impacts on the landscape and contributes to shaping the landscape in ways that we sometimes don’t think about or imagine.”

What we do imagine in all our modern wisdom is a world of dangers, and the stories we tell are stories of trying to control that which seems to cycle further and further out of our control. We have our ancient wiring to blame, a bit, but also a culture that says this is the only way.