Union Pacific has crews cleaning up the huge mess all over the tracks in Lincoln Heights, CA, on January 17, 2022. Seventeen boxcars derailed in the areas where thieves looted and left tons of trash and debris all over the railroad tracks. Photo credit: © Gene Blevins/ZUMA Press Wire
Journalism & Media

The Great Los Angeles Train Robbery Is an Exercise in Misdirection

The vision seemed to crack something open in the media: a hot story about systemic decay. Reporters jumped into the detritus like kids in a ball pit.

Stories fell into a pattern:

Keep hearing of train burglaries in LA on the scanner so went to #LincolnHeights to see it all. And… there’s looted packages as far as the eye can see. Amazon packages, @UPS boxes, unused Covid tests, fishing lures, epi pens. Cargo containers left busted open on trains. @CBSLA pic.twitter.com/JvNF4UVy2K

Given the international proliferation of coverage of what’s essentially a local crime story, clearly this great train caper is resonating on some deeper level.

Possibly, there is a species of story — a grisly murder in a tony neighborhood, a homeless encampment in a city park, the Satanic Temple fighting with Texas for abortion rights — that signifies as proof that, finally, here, Things Are Falling Apart. A further data point in the larger story of civilization’s collapse.

Something about this type of story also inspires a kind of incuriosity, or dull acceptance. (Maybe it’s the novelty.) No one’s hashing out deeper causes, or consequences. Reading all the train coverage, you’re left with a feeling of… huh. As in, what does it mean? Does it mean anything?

And when the head of the California government shows up, it becomes less clear rather than more. Here’s Gov. Gavin Newsom (D), slicked hair covered by a California bear baseball cap, digging through the blast radius of exploded packages with some of LA’s elected officials. Should we be inspired by their pluck or just exasperated by the political optics?

We don’t learn anything here either, other than that the governor is also pretty confused. Watch as The Los Angeles Times introduces us to a fun new character named “Cranky Uncle Gavin”:

On Thursday, Gov. Gavin Newsom showed up to express his own confusion and outrage, even helping cleanup workers bag trash at the rail yard in Lincoln Heights.

“The images looked like a Third World country,” Newsom told reporters. “What you saw here in the last week is just not acceptable. So, I took off the suit and tie and said I’m coming because I couldn’t take it. I can’t turn on the news anymore. What the hell is going on?”

But here’s a good example of how this End of Civilization story breeds dumbness. Newsom “can’t turn on the news anymore,” and has no idea “what the hell is going on.”

It feels like one more performance in a series of them, everyone trying to avoid blame. The news media happy to trot along, repeating talking points and ogling busted boxes.

From the beginning, the media let Union Pacific shape the narrative. (Kind of like how the media relies on police departments to tell the story when police shoot people, which is how vague terms like “officer-involved shooting” creep into reporting.) By framing coverage around the railroad giant sending that letter to Gascón’s office, the story presents the conflict as being about whether or not prosecution failed to prevent the crimes. Now, news coverage does point out that Union Pacific has its very own private police force, armed and sworn law enforcement agents whose primary responsibility is keeping the peace along the railways, but that detail is somewhat lost amid all the overlapping jurisdictions and acronyms. The LA Times story did quote an LAPD captain, though: “Union Pacific from Yuma, Ariz., to LA has six people patrolling.”

So is this the End of Civilization, so dire that even the executive officer of the state has no idea what’s going on? Or just, like, a staffing issue?

Let me see if I can dig up an analogy amid the detritus.

Let’s say a bank keeps all its money and valuables in a plywood shed in the alley out back, the door secured by zip ties, all mostly unwatched. Now, it’s been known to happen that thieves will cut the ties and clean out the shed from time to time. The bank sends a huffy open letter to the DA complaining that nobody is prosecuting, while the media wades through the emptied safe deposit boxes, seeking meaning among the loss.

Remember that viral story about Amazon packages stolen from trains in LA – & how it was blamed on lax LA prosecutors?

Well, @LATACO actually did some reporting & its sources say that Union Pacific quietly laid off over 80% of its security force recently: https://t.co/Duep3138m7

This would not happen. Everyone would ask why the bank has such crappy security. And yet the focus of these news stories is on the thieves and general hand-wringing over some new twist in our moral decay when, rather, this appears to be basic opportunism on one side and an abdication of corporate responsibility on the other.

Why so few agents? The Los Angeles Times again: “Former employees and police say budgetary issues have slashed the ranks of the company’s force, leaving as few as half a dozen in the region. Union Pacific declined to say how many agents it has.”

The very good local outlet L.A. Taco reports that Union Pacific laid off a bunch of workers in 2020, and according to an anonymous employee, “The number of patrolling officers has been cut from 50 to 60 agents to eight, which the worker thinks has led to an increase in train robberies.”

Union Pacific, meanwhile, says it suffered $5 million in loss and damage (not counting the no doubt much bigger losses to the intended recipients of all that stuff). But some light reportorial snuffling reveals that $5 million is a drop in the bucket.

The company just reported quarterly revenue of $5.56 billion, a 13 percent increase since last year. Despite all that “loss,” it just had a 10 percent dividend increase. “Union Pacific continues to deliver strong cash returns to our shareholders,” Jennifer Hamann, Union Pacific executive vice president and chief financial officer, said in the earnings report. The company reported its net income for 2021 was $6.5 billion, compared to $5.6 billion in 2020. UP’s healthy profit in no way excuses the thefts, but certainly puts that rise in thefts in some perspective.

So, to Gov. Newsom: What the hell is going on here may be that Union Pacific got caught skimping on security, and now wants to lay the blame for leaving your Xbox unsecured on the progressive DA. (Crime stats, for what it’s worth, suggest violent crime is up, property crime is down, and prosecutions haven’t dropped by much overall.) 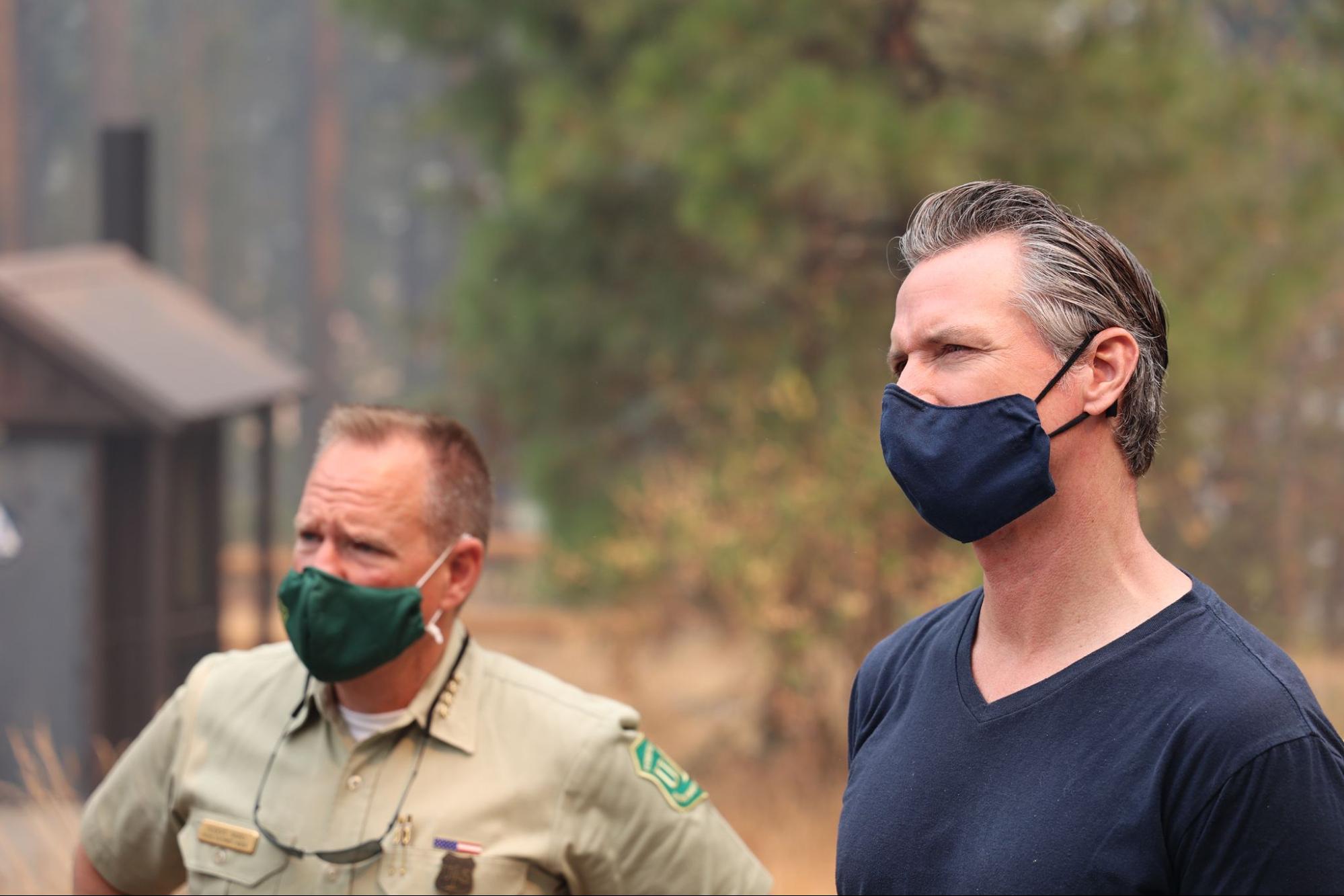 So is that the story? That a corporation “failed” in its obligations for the sake of the bottom line? And how seriously should we take these thefts? Do they matter to anyone beyond Sriracha fans and armless robots?

Genevieve Giuliano, a University of Southern California professor who studies transportation policy, freight, and local government, said that while $5 million in losses is small for Union Pacific, “The impact on the supply chain is much larger.”

“Lots of customers are not getting their goods,” she said. “The losses will eventually increase insurance rates, put pressure on prices (if I’m going to ship with UP and take the chance of losing my goods, I want a discount). If the thefts continue, it is only a matter of time before there is loss of life.”

I also asked her about the curious threat Union Pacific made in that letter that, like UPS and FedEx, Union Pacific “is now contemplating serious changes to our operating plans to avoid Los Angeles County.”

Can a train do that? Can it just… go somewhere else?

“It would be difficult to significantly change the train service,” Giuliano said. Union Pacific is heavily invested in the LA and Long Beach port complex, so it’d be hard to up and leave. “However, it is quite possible to marginally reduce some services and increase others. Right now the demand for rail service is very high, so any reduction in service could have a large impact on the supply chain.”

So, there is some deeper meaning. There’s some hell that’s going on. The Great Los Angeles Train Robbery story may not herald the End of Civilization. Instead, it’s a business story, about a huge and essential corporation threatening to exacerbate a national infrastructure crisis if it doesn’t get its way, which in this case, may mean outsourcing its responsibilities to public services so it can return more to shareholders. That’s about as neat a package as I can put this in. Go ahead and tear into it.