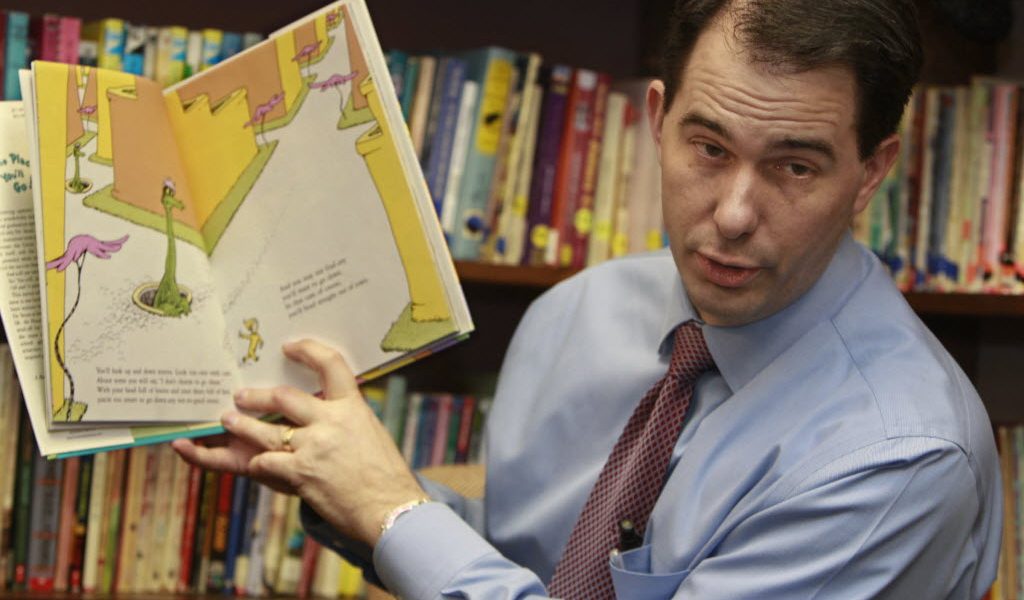 Conservatives and Republicans supposedly love Scott Walker. Why? Because he is Union busting? Maybe, but recent data suggest that Unions aren’t as unpopular as they seem. Maybe it is down-home history (i.e. wearing Kohl’s sweaters), appeals against big government, and survival against a massive Democratic-led recall.

These things can be very popular for a prospective Republican presidential candidate.

Yet, despite all the anti-big government rhetoric, Walker’s latest move is poised to give the governor’s office more autonomy. Where? In public universities.

“As Mr. Walker takes steps toward announcing his candidacy for the Republican presidential nomination, he and leaders in Wisconsin’s Republican-held Legislature have called for changes that would give a board largely picked by the governor far more control over tenure and curriculum in the University of Wisconsin System.”

That seems a bit far-reaching, no? It gets better (or worse?):

“A committee of lawmakers last week approved along party lines a proposal that would remove the notion of tenure in the university system from state statute, leaving the sensitive matter to the state’s Board of Regents, which oversees the system’s 13 four-year universities and some 180,000 students.

Under the proposal, the board’s 18 members — 16 of whom are appointed by the governor subject to the confirmation of the State Senate — would be permitted to set a standard by which they could fire a tenured faculty member “when such an action is deemed necessary due to a budget or program decision requiring program discontinuance, curtailment, modification or redirection,” not only in the case of just cause or a financial emergency, as permitted previously. Critics deemed it tenure with no actual promise of tenure.”

Republicans, however, think the initiative is all a misunderstanding:

“The reality is that we are not eliminating tenure,” said Senator Sheila Harsdorf, a Republican, adding that she believed the effort had been misunderstood as a broad condemnation of tenure.

Wisconsin is rare for including tenure provisions for professors in its statutes rather than in policies set by regents or similar boards. “We are directing the Board of Regents to develop a policy, just as there is in so many states,” Ms. Harsdorf said. “It’s just a matter of recognizing the ability for chancellors and campuses to administer and manage their operations.”

Hmmm….OK. But what about this?:

“Mr. Walker has called for still more sweeping changes to the state university system. As part of his budget proposal in February, the governor said he wanted to shift the entire university system out from under direct state oversight. He called for the creation of a “quasi-governmental” authority that could act on its own on issues of personnel, purchasing, capital projects and tuition. He also wanted to cut state spending on the system by about $300 million, or 13 percent, as part of his answer to an anticipated budget shortfall.”

Now, on the surface, this doesn’t sound absolutely terrible. Rather, it sounds like a governor who wants to “eliminate departments or courses that do not attract many students or much research money” under a “quasi-governmental” authority that is filled with his Republican allies. And, worse, possibly remove professors that do not align with Walker’s model for education. Is this the worse case scenario? Yes. However, Walker did knock down unions in possibly the most Big Labor state.

So, anything can happen.