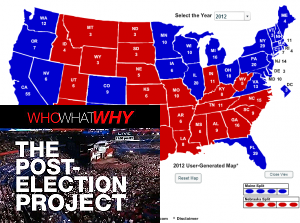 OEN: My guest today is Russ Baker, forensic journalist, author and founder of WhoWhatWhy. Welcome to OpEdNews!  We have a lot to talk about today. Let’s start with “forensic journalism.” What is it exactly?

RB:  We sort of made that term up. It’s whatever you want it to mean. But generally, it refers to going into things with an open mind, a lot of curiosity, and the tools and instincts for digging. We are not out to take sides. We are out to investigate, and see what’s what. Once we investigate, though, we don’t hedge–we get straight to the point of our findings.

OEN: So that’s what you do at WhoWhatWhy, Russ? What kinds of stuff do you investigate? Give us a sense of what goes on over there, please.

RB:  We find that conventional journalism is jam-packed with disinformation, and we aim to correct it.

When we sense that the real story isn’t coming out–on almost anything of national or international interest–we start poking around. You’ll see a lot on the real reasons behind the actions of governments and large institutions. We’re very interested in how powerful players manipulate the system to get what they want and then work to keep the public from knowing what actually happened. There’s no better example than with the true, versus stated, reasons for military interventions. We’re also aware of how the system works to discredit and if necessary destroy its critics—we try to show when people are victims of this.

OEN: It all sounds terrific and much needed. One of your most recent pieces discusses the John Edwards case.  Isn’t his precipitous fall yesterday’s news?  And isn’t Edwards just one more politician who didn’t live up to his promise?  What’s so special about this case?

RB: We ask what the basis for this prosecution is—and why he is facing a potential 30-year jail sentence for what is at most a violation of Federal Election Commission rules. We note that the media seems to dance around the core and sole issue at hand, so that the public is confused about why Edwards is even in trouble. And then we note the very selective nature of prosecution involving politicians and sex. What we see is this: there’s a disproportionate targeting of liberal politicians with a strong populist bent—who have explicitly gone after the very wealthy, corporate interests and powerful entities like the CIA. We review other cases, such as Spitzer and Hart. And we find that in numerous of them, the story of how they even came to be ensnared and caught raise red flags.

OEN: That sounds kind of conspiratorial, Russ. Couldn’t it just be coincidence that liberal politicians are disproportionately caught in the net? What kind of evidence can you offer of these red flags?

RB:  What does “kind of conspiratorial” mean? That’s what we call a “dysphemism”—it tamps down serious discussion without adding anything. The article speaks for itself in citing cases of Republican sex scandals that did not develop, and ones where liberals were pursued for criminally insignificant things beyond reason. I don’t say these things necessarily signal something—I say they are curious, and worth more study.

OEN: Fair enough. So, where’s the media in all this – mainstream or alternative, for that matter?

RB:  The media has been almost entirely AWOL on the Edwards case–no signs of initiative anywhere, not in the mainstream nor the “alternative” media (which is not much of an alternative when it comes to “deep politics” investigations.) This is actually quite common, and exactly why we started WhoWhatWhy. Somebody has to look into these things.

OEN: Since you tread where others can’t or won’t, what kind of response do you get from them? Do they take you seriously or regard you as loonies because no one else is going there? Fellow journalist Bob Koehler has often talked about the sheep mentality that seems to prevail among journalists: if no one’s going there, no one’s gonna go there.

RB: There is a huge demand for the truth. We get a lot of enthusiasm from readers, and fierce loyalty. Their only frustration is that we’re limited in what we can produce right now–which is a factor of being a nonprofit and needing the public to step up more in terms of support.

OEN: That must be gratifying. Now that the public knows you need support to do the work you do, investigative journalism being an expensive undertaking, how do the media “deal” with you?

RB: I think the crux of what we do is implicitly a renunciation of all that is wrong with journalism. That others in the field might wish we would disappear can hardly be surprising.

OEN: That’s what I was thinking, actually. Does it get lonely being a crusader for what journalism is supposed to be and do?

RB: It’s only lonely if your main concern is to have a reserved seat at the feast. We like being appreciated by those who are fed up with the crap.

OEN: Right before the 2004 election, you did a newsworthy interview with President Bush’s biographer about W’s military service. This was after the Dan Rather/60 Minutes debacle and you had a hard time getting it published. Did the story get the traction it should have? If not, would it have made a difference?

RB: Basically, every news organization I dealt with wanted the story—and every one in the end caved for one reason or another and did not publish it. This was, as you point out, in the aftermath of the 60 Minutes “false documents” mess, and the media was terribly intimidated, worried about publishing anything that might make the Bush organization come after them.

In that interview, Bush’s biographer revealed a number of stunning things (which I lay out in great detail in my book Family of Secrets.) One revelation was that he actually HAD left the National Guard prematurely, just as CBS claimed. Another was that, as a candidate, he had almost no ideas of what he would do as president, except he was obsessed with one idea: that he should invade Iraq, because having a war as president made one politically popular.

Certainly, these revelations, if published, could have had a major impact in what was an extremely close 2004 election.

OEN: How incredibly frustrating.  So much for the independent, watchdog press.

You’ve covered a lot of ground over the years, Russ. Which of your stories has given you particular satisfaction?

RB: That’s a tough one! I feel strongly about many. I guess one I might single out involved my trying to figure out why NATO wasn’t capturing Radovan Karadzic, the Bosnian Serb accused of ordering and orchestrating war crimes and genocide. I went looking for answers both in terms of NATO and in terms of how hard it might be to actually locate Karadzic, who by that point had been in hiding for years. I managed to place that article in major publications in one country after another, and eventually it ran in about 25 countries, many of them NATO members. I can’t prove that it had an impact, but after its publication, NATO did gradually begin to take action, and Karadzic was eventually caught, convicted and imprisoned. You can read a (comparatively) short version of the article here.

OEN: I recently attended my son’s graduation from the University of Maryland. Those majoring in journalism were few and far between, especially compared with the hordes in business and finance. What words of wisdom do you have for journalism grads?

RB: Journalism is supposed to be about the truth. So here’s the truth: journalism has always been an adjunct to advertising, which was the real main event. When websites figure out how to make enough money off ads, there will be jobs in journalism again.

In the meantime, perhaps the best thing you can do is find work doing anything — and then get experience in journalism on the side. If you’re really good, someone will want to find a way to pay you to do it.

Since we started this interview, the Edwards verdict came in. Were you surprised?

RB: Not at all. It proves that there’s still hope for democracy. The jury was trying its hardest to do the right thing in a technically complex case, but overall saw that this was a pretty far stretch. What I’m more interested in—and what I wrote about—was why the government chose to go after this particular person with this particular case. As the title of my article said, “Something Stinks.”

OEN: Good for the jury. But, now what, Russ? How do you/how does one go about correcting a system that has so many rotten elements?

RB: Not to sound like a broken record, but the big problem in all this, in my opinion, is the media. We’re supposed to investigate institutions and hold their misdoings up to the light, again and again, until the people become fed up and take action.

OEN: Care to comment on the Supreme Court’s refusal to examine the Siegelman/Scrushy case?

RB: The Siegelman case is another odd one that reminds of Edwards. The entire basis for the prosecution was questionable. Yet once again, as with John Edwards, the media showed little inclination to dig for answers or challenge the legal system when it seemed to be railroading a man for political purposes.

OEN: Definitely bad news for Siegelman and Schrushy.  What else would you like to talk about before we wrap this up?

RB: In this country, things are getting worse almost across the spectrum, but the electoral system seems inadequate to the task of fixing things, and the media is AWOL, too busy chasing formulas that will produce ad revenues. The only hope is that the public wakes up–and that readers of sites like OpEdNews help, on a daily basis, spread the real story of our times to those who are in the dark. If enough people understand what is at stake, we have a chance. Fingers crossed… and pounding the keyboard.

OEN: [Thanks for the plug!] I wish there were a lot more intrepid journalists out there working hard, doing their jobs and restoring the tattered integrity of a free press. Thanks so much for doing what you do, Russ.  It was a pleasure chatting with you.