If you’ve not been following the Kyle Rittenhouse trial, you may not have seen the flurry of news about the judge forbidding prosecutors from using the word “victim” to describe the two people killed by Rittenhouse in Kenosha, WI, in August 2020 during unrest precipitated by the police shooting of a black man named Jacob Blake.

“The word ‘victim’ is a loaded, loaded word,” the judge said. He did not forbid the use of  “rioters,” “looters,” or “arsonists” in reference to the deceased, Anthony Huber and Joseph Rosenbaum, and another man, Gaige Grosskreutz, who was injured.

The media pounced on this apparent contradiction as the smoking gun — er, “off-gassing projectile launcher” — that suggested dangerous bias on the part of Circuit Judge Bruce Schroeder. Clearly, the stories suggest, this is a manipulation of concepts that might prejudice the jury.

Anywhere there is conflict, the language itself is a victim. Or, perhaps, “looter” if you think language is culpable, running around willy-nilly, smashing semantic windows and stealing the flat-screen TVs of context. Amid the social unrest of last year, we see a culture and a media wrestling in real time with how to explain it.

Warren Commission: Sure, the president was killed by the bullet, but we’re not ready to call him a “victim” of it.  After all, he did Vietnam, and Dallas might be a self-defense thing.

What the Rittenhouse prosecution is going through now, the press itself dealt with during those protests — or were they riots? Or, um, “mass-expressions of civic opinion”? When covering the “public-people events” arising in 140 cities in response to the killing of George Floyd, those news outlets that put images of looters and broken windows on their front pages or used the word “riot” or “violent” found themselves accused, like Judge Schroeder, of dangerous bias. If news outlets focused on the fact that the protests were almost entirely nonviolent nonriots, conservative media licked its chops — er, “masticating apparatus” — and dug in.

And conservative media were only too happy to bring this back up after January 6: “The media went out of its way in 2020 to paint sometimes violent protests across the nation as mostly ‘peaceful’ but finally came around on Wednesday to the notion that mayhem and anarchy is always unacceptable — all it took was Trump supporters causing the chaos to spark a swift change of heart.” This is a fairly reductionist view — who exactly are “the media”? How do you qualify “mostly ‘peaceful’”? And, while Fox News both ignores the outlets actually asking these questions and fails to analyze the differences in motivation behind those protests, it at least is right that “the media” has a hard time wrestling with the meaning of American protest in the 21st century.

We aren’t great at reconciling concepts, especially when they’re in conflict. Yes, amid the protests there was some rioting and looting, and it was extremely costly, and also yes, injustices exist that should be pointed out, and yes, protest is a fundamental right, and yes, the police shouldn’t bombard with tear gas and arrest and attack those peacefully exercising that right, and yes, there are good cops, and yes, the whole thing, the whole thing, is deeply in need of change. But can you hold all that in your head at once?

Bonnie, who’s dying: The lawmen really victimized us with all those Tommy guns, Clyde.

Indeed, our cup runneth over. We can even wrestle with the meaning of multiple protests on the same day.

If you were lucky enough to be in New York traffic on October 25, you might have been caught up in one of two protests. The group Extinction Rebellion made a stand against the climate crisis over on FDR Drive while a group of police and firefighters marched against vaccine mandates on the Brooklyn Bridge. Both stopped traffic, but the coverage differed.

For Extinction Rebellion, the focus of headlines was often on the nuisance and the outcome: “Climate Protesters Arrested After Blocking New York’s FDR Drive During Morning Rush Hour.”

For New York’s finest and bravest, the focus was on what they were marching for: “NYC Firefighters And Police Officers Join Thousands In Brooklyn Bridge March Against City Vaccine Mandate.” 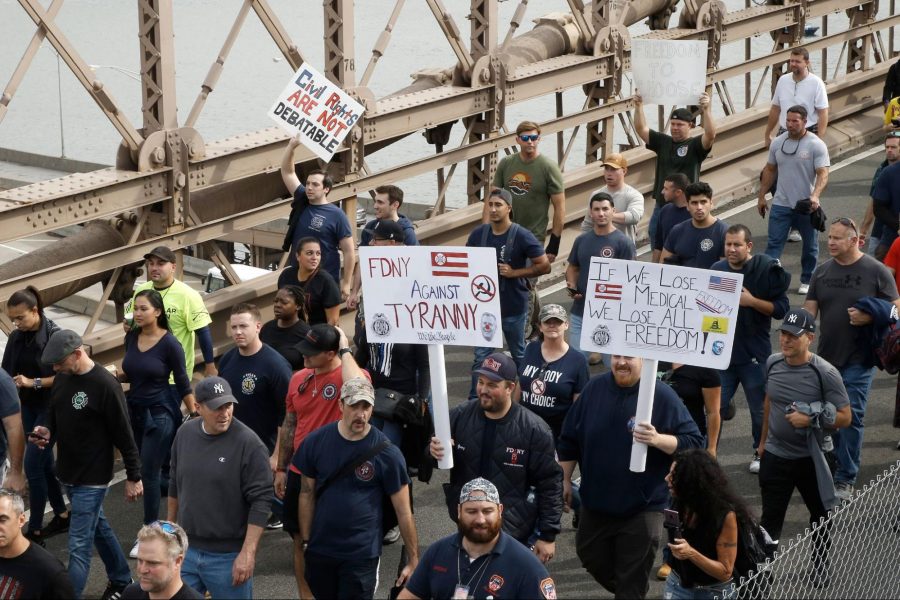 (Am I cherry-picking? A little. But look for yourself; the thesis holds.)

Both groups stopped traffic — which is annoying — but is one a villain and the other a crusader? Research undertaken by Nieman Lab suggests a precedent in coverage of liberal vs. conservative protests:

Centering protest coverage around the impact on traffic, local businesses, and property is one way that the protest-as-nuisance framing manifests. And, according to the study, that “annoyance” framing increased over time — newspapers were more likely to frame a protest as a nuisance in 2007 than in 1967. The study also found that protests over liberal causes were framed as nuisances more often than protests over conservative causes.

Why does this matter? The role of protest is to publicize grievances from people who typically exist outside of traditional power structures.

For the sake of brevity and conceptual convenience, we reduce complex agents to simple tokens. Either/or binaries: good/bad, protest/riot, victim/looter.

California Fire Chief: Look, they chose to live there, and they chose to produce CO2, so I wouldn’t call them “victims” of the wildfire so much as “co-conspirators.”

Language is a tool to create reality. Like any tool, it can be a weapon that, when wielded improperly, can damage our conception of reality. Sometimes this can turn on a single word.

Armorer Hannah Gutierrez Reed told investigators that live ammo was never kept on set. Investigators said that they recovered roughly 500 rounds of ammunition from the set — a mixture of “blanks, dummy rounds and what we are suspecting were live rounds.”https://t.co/InAxKZqIbv

Consider the situation in New Mexico, where, on the set of the movie Rust, Alec Baldwin shot and killed cinematographer Halyna Hutchins and injured director Joel Souza. How did he do that with what consistently gets called a “prop gun?”

Story after story is like CNN’s “helpful” “explainer”: “Prop guns: What they are and how they can kill.” Reportage painting a picture of a fake, movie-magic gun that somehow went wrong in an unpredictable way ends up cementing this idea of a freak event in the public imagination, even as it now appears to be a case of live ammunition brought onto a mismanaged and unsafe set and loaded into what you must admit was a very real gun.

But “prop gun” is somehow hanging in there, and thus you get absurdities, like “the ​​prop gun Baldwin was handed had a live round in it.”

Time will tell. The news must be reported, and it will be incomplete, but if you’ve tuned out after a few news cycles, you might continue to believe the “prop gun” angle.

Pontius Pilate: I mean, is he really a “victim” of the cross? How do we know he didn’t intentionally get in the way of those nails?

The Rittenhouse trial is only the latest site of linguistic unrest. Is it somewhat overblown? Probably. The judge apparently forbids the use of “victim” as a rule, and, anyway, if prosecutors can’t find another way to describe how Rittenhouse killed men with bullets, they probably aren’t very good prosecutors. What’s the takeaway? Beware of simple terms marching — or should that be rioting? — through complex stories. And beware of those who would weaponize the language, intentionally or not, to obliterate any semblance of meaning.

Defense: … And what is “Kenosha,” your honor? I know of a place called “Pike Creek” in 1836 and subsequently called “Southport,” and, if either of those is the true name of the place, then “Kenosha” can’t be said to exist, and therefore a crime can’t have occurred in Kenosha.

The “defense” makes a point. Or, at least, a “non-rounded end-area.”