While media outlets like to portray themselves as beacons of inclusion and preach the need for transparency, when it comes to racial diversity in their own ranks, the numbers tell a very different story.

On the one hand, the journalists who work for them — especially those who are young, female, and/or members of a minority — believe that their industry lacks racial and ethnic diversity.

Perhaps even worse, most media outlets are trying to keep information on the demographics of their newsrooms hidden from the public.

According to a wide-ranging Pew Research Center study that included responses from almost 12,000 journalists, more than two-thirds of participants between the ages of 18 and 29 felt that there is not enough racial and ethnic diversity in their newsrooms. This sentiment was shared by 59 percent of female journalists and a majority of people of color.

Conversely, most older white men did not share this view. In fact, only 37 percent of journalists over the age of 65 — and 46 percent of all male respondents — believe that their industry is lacking in racial and ethnic diversity.

These numbers should serve as a wake-up call to all news organizations, said Stephanie Edgerly, a professor at the Northwestern University Medill School of Journalism. She argued that news organizations need to start having conversations about “what diversity means in their company and how it is integrated into their day-to-day decision making.”

The Pew survey indicates this is not happening. Fewer than half of the journalists said they had participated in diversity training in the past year — training directed at not only improving inclusion and diversity in the workplace but also how stories touching on racial issues are covered. Surprisingly, journalists who identified as minorities were most likely to participate in such training. 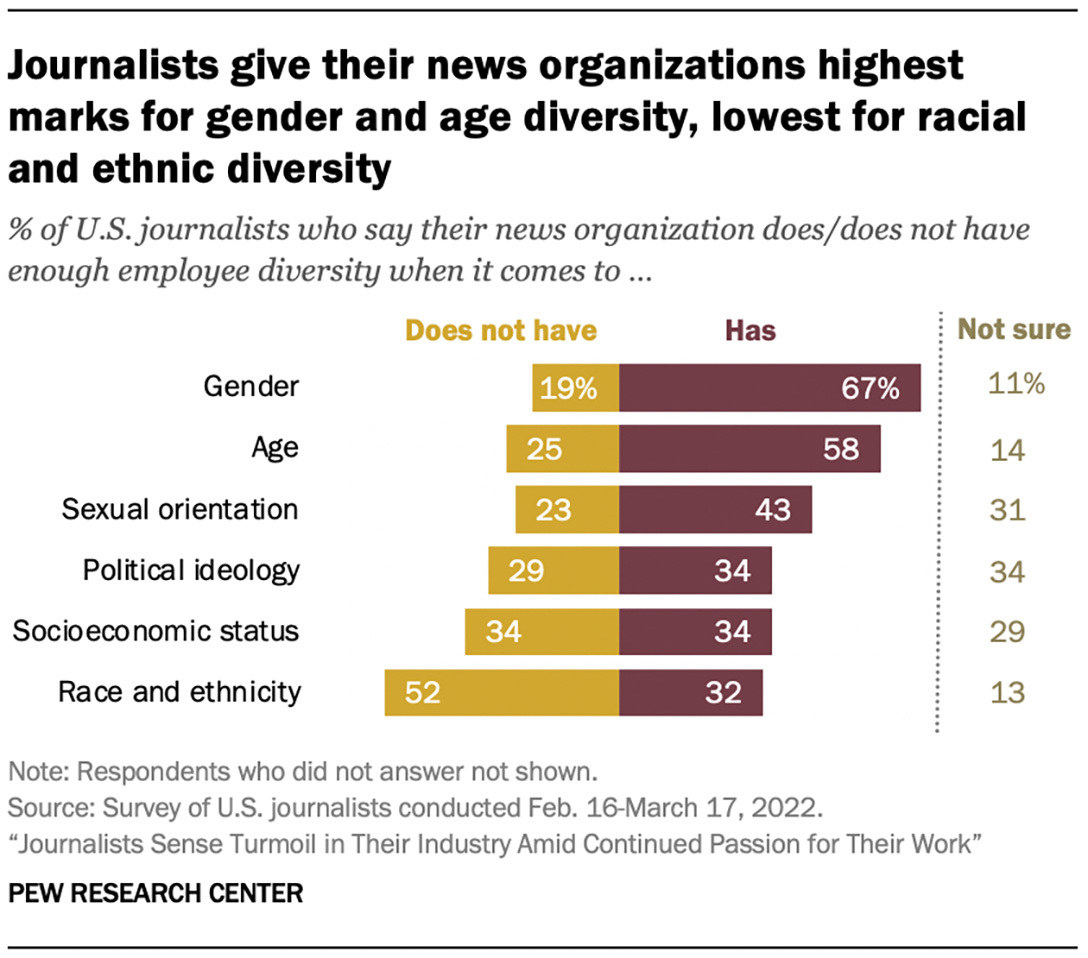 “The coverage we have seen around this story reveals there is still much work to be done in how newsrooms report on issues affecting the Black community and how unconscious bias still plays a role in the way suspects and victims are portrayed in the media,” the NABJ said in a statement. “We expect every newsroom in America to have policies, procedures and people in place at all times to ensure coverage is fair, sensitive, thoughtful and accurate.”

Part of journalism’s problem in this regard is that newsrooms are very white. How white? No one knows — which points to another major problem in the news industry.

Many media organizations simply refuse to disclose the data that would reveal the racial and ethnic makeup of their newsrooms.

Take the annual diversity survey of the News Leaders Association (NLA), a nonprofit group that provides training and support to journalists. With the goal of measuring newsroom diversity, it reached out to thousands of print and online news organizations last year; the goal was to hear back from 2,500 of them by the end of 2021.

“In order to inform our democracy, at both the local and national level, we need to better represent, reflect, understand and serve all the people in our regions,” NLA President George Stanley said at the time. “The only way to improve is to measure where we’re at and track our gains.”

What the group found instead is that the industry has no appetite to make this information public. In the end, only 303 newsrooms responded, which was even fewer than the 429 organizations that did so in 2019 — when the NLA halted its survey due to a lack of participation. 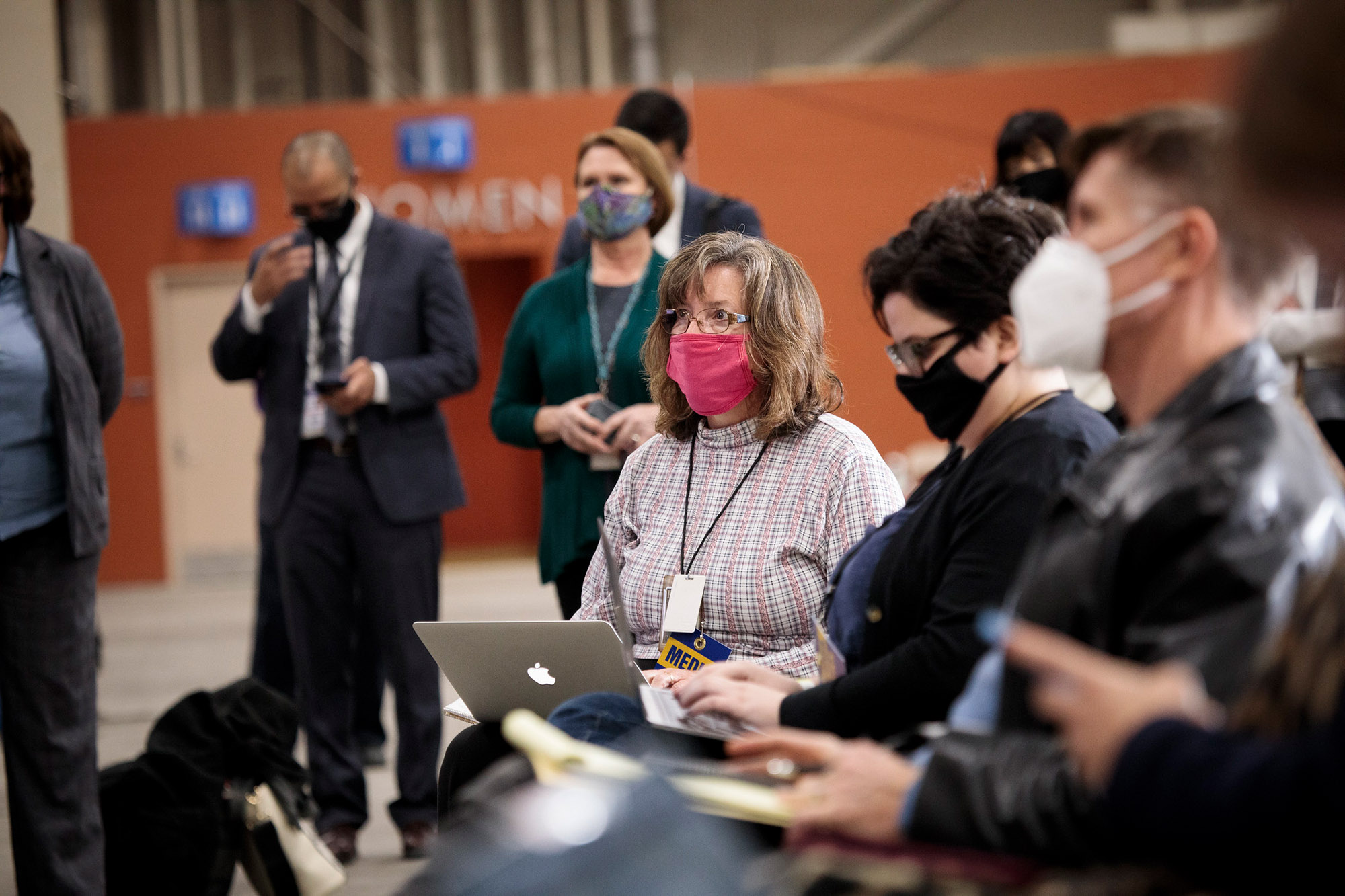 To address this embarrassing lack of transparency in an industry devoted to informing the public, a broad coalition of journalism organizations has petitioned the Pulitzer Prizes to make participation in the NLA survey mandatory for any news outlet that wants to be eligible for receiving journalism’s most prestigious award.

“Our country is reckoning with racial inequity and many in the journalism industry can’t or won’t provide essential newsroom transparency on staff diversity,” the petition said. “If we can’t collect crucial data, how do we expect to improve newsroom diversity and represent our communities?”

Furthermore, the groups argue that “journalists have an ethical duty to be accountable and transparent” and “must be accountable to our readers and our workers by making sure our newsrooms reflect the demographics of our readers.”

Edgerly also noted that the issue of representation in newsrooms is often tied to the demographics of their audience — which itself is often not representative of the population as a whole.

At a time when many media organizations are struggling financially, more inclusive newsrooms with reporters that cover a broader range of issues could attract larger, more diverse audiences, with a potentially significant impact on their own bottom line.

However, this cannot just be a token effort. Edgerly noted, “Diversity is not a checkbox that is satisfied when you make hiring decisions, change language, and when you make people attend a meeting.”