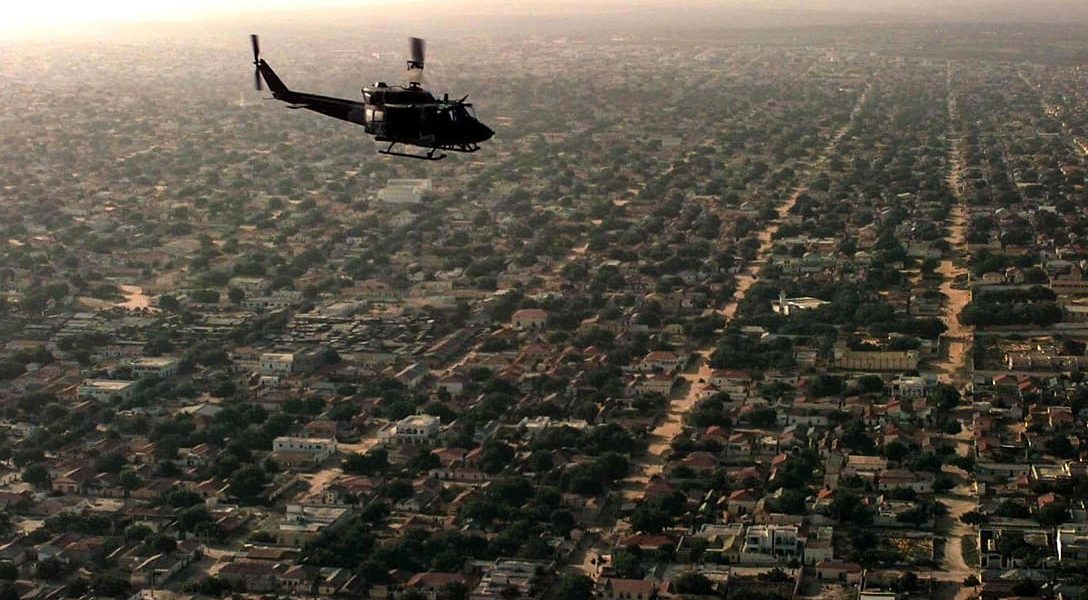 US helicopter as it flies over a Mogadishu residential area, December 1992. Photo credit: US Air Force / Wikimedia
Journalism & Media

EXCLUSIVE: On the 25th anniversary of President George H.W. Bush ordering US troops into Somalia, supposedly to ensure the safe delivery of famine aid, WhoWhatWhy interviews a war reporter about what really happened.

In 1991, Charles Glass — a journalist with a 45-year career reporting on conflicts in Africa, Europe and the Middle East — was sent by ABC to Somalia to cover a story that other outlets had been writing about: masses of famine aid were being stolen by bandits.

But what Glass found when he got there radically contradicted what the mainstream media had been reporting.

“As far as I could tell, the whole thing was being done to justify an intervention that the Pentagon and Bush himself wanted to make anyway.”

As soon as he arrived he met the logistics chief for the UN aid delivery effort. “He and I spent a whole night drinking on the roof of their compound, going through their dispatch logs page by page — each one showing a delivery from which ship, and which truck they’d been taken out on.”

What the UN logistics chief shared with Glass that night showed there wasn’t a story to be written about massive amounts of aid being hijacked. “The theft rate was about 10%, which was the same rate, if not lower than the theft rate in Iraqi Kurdistan at the time.”

But there was no media interest in aid going missing in Kurdistan, or anywhere else in the world.

“I told ABC this but they didn’t want to run my story and asked me to do a piece in line with everybody else’s. We had a big fight about it and I ended up not writing anything.”

Glass had come up against a “pack mentality,” and railed against it by not writing what ABC wanted him to write. He allowed the facts to get in the way, and as a result his integrity as a reporter remained intact. But without his reporting the aid-theft narrative gained momentum — so much so that in December 1992 President George H.W. Bush ordered American troops to lead a “mercy” mission to Somalia, to ensure safe passage for aid to reach the starving population. Glass has a different theory as to why troops were dispatched. “As far as I could tell, the whole thing was being done to justify an intervention that the Pentagon and Bush himself wanted to make anyway.”

To illustrate this point, Glass said. “I bumped into a Marine colonel near Baidoa whom I had known during the 1991 war over Kuwait. He was out of uniform, scouting places to put bases” — an indication that planning was underway to invade months before the plan was made public.

“[Drone strikes] simply create more killing and mayhem and people end up joining those organizations that the US is trying to destroy because they have lost their fathers, and their mothers, and children to American aerial bombardment and have nothing else to live for.”

The mission to Somalia transmogrified from support for aid distribution to policing the warring factions vying for power after the deposition of President Siad Barre.

The US found itself caught up in Somalia until 1994, and 18 soldiers were killed and 73 injured when a routine sortie to arrest two dissidents turned into the 15-hour long battle of Mogadishu — depicted in the Hollywood blockbuster film Black Hawk Down.

Somalia has suffered greatly over the intervening decades. The north of the country, known as Somaliland, declared independence from the rest of Somalia after the fall of President Barre in 1991. It has not yet attained international recognition as an independent entity. Nevertheless, with a relatively stable, democratically elected government and a modestly successful economy, it is faring better than the south. The south of Somalia is in the hands of al-Shabaab, an affiliate of al-Qaeda and the most violent extremist group in North Africa.

Al-Shabaab recently called the US recognition of Jerusalem as Israel’s capital “evidence of an escalation in its aggression against Islam and Muslims,” and has been using President Donald Trump’s call for a Muslim ban in recruitment videos since January 2016.

There have been 30 covert strikes on al-Shabaab targets since the start of the year, killing an estimated 200 of their fighters — according to the Bureau of Investigative Journalism. The Pentagon has doubled US presence in Somalia in reaction to the double truck bomb blasts on October 15 that left 300 dead. Al-Shabaab has not claimed responsibility for the carnage.

“They simply create more killing and mayhem,” Glass said, “and people end up joining those organizations that the US is trying to destroy because they have lost their fathers, and their mothers, and children to American aerial bombardment and have nothing else to live for.”