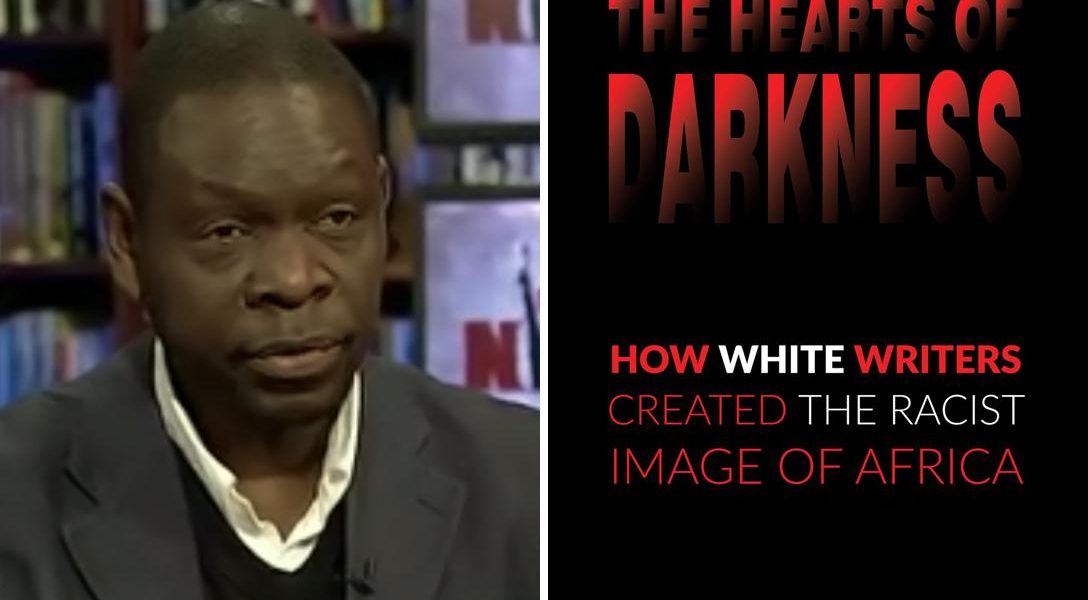 Hearts of Darkness, Part 1: Betrayal of an African Scholar

Below is an excerpt from the book, “The Hearts of Darkness: How White Writers Created the Racist Image of Africa,” by African scholar Milton Allimadi. The author has documented — often in gut-wrenching detail — the ways in which the western media have for centuries distorted the image of Africans. And always for the same reasons: to enable the exploitation of Africa’s people, its natural resources, and its strategic location.

The side effects of such distortion extend far beyond Africa, into such places as Watts, California, Ferguson, Missouri, Chicago’s south side — and the rabble-rousing rallies of Donald Trump.

The first excerpt is from the book’s introduction. It briefly touches on several themes, but the highlight is the story of how the Columbia Journalism Review tried to checkmate Allimadi’s exposure of The New York Times’s dishonest reporting.

This is the first of three excerpts from The Hearts of Darkness: How White Writers Created the Racist Image of Africa by Milton Allimadi (Black Star Books Co., 2016). From his introduction. (The excerpt has been lightly edited and compressed.) For Part 2, please go here.

I wrote The Hearts of Darkness: How White Writers Created the Racist Image of Africa in order to fight the stereotypical racist representations of Black people, along with the ignorance and the cover-ups that go with it, which still persist in contemporary media. During the course of my research, I encountered some gatekeepers who prefer to defend the status quo…

Africans are still referred to as “tribal” peoples, with all the attendant negative perceptions that spring from the word — sometimes with deadly consequences.

When Tutsi insurgents invaded ethnically volatile Rwanda from Uganda in 1990 and the war degenerated into genocide in 1994, Western media referred to the conflict as “tribal” warfare. In an infamous article published in its April 25, 1994, issue, Time Magazine conjured up images of cannibalism, by explaining that “tribal bloodlust” was fueling the war.

Meanwhile, the Clinton Administration blocked any significant intervention by the United Nations — because it was believed that “tribal” wars are intractable and irresolvable.

The Hearts of Darkness illuminates the process behind the “tribalization” of Africa. John Hanning Speke’s Faithfuls. (Book plate, 1893) Photo credit: Journal of the Discovery of the Source of the Nile / Google Books

Originally, I had intended to write a magazine article focusing on the evolution of The New York Times’ coverage of Africa, entitled “Darkest Times in Africa.” I had first conducted the research in 1992, while I was a student at the Graduate School of Journalism at Columbia University. During the course of research for my master’s thesis, I gained access to the Times’ archives and unearthed several racist letters that had been exchanged between the newspaper’s foreign editor and the reporters sent to cover Africa.

One Times editor, who was involved in some of the most virulent exchanges, was Emanuel Freedman, foreign editor from 1948 to 1964. A Times reporter, Homer Bigart, espoused similar racist sentiments in his letters.

In one letter, when the Times sent Bigart to cover emerging independence movements in West Africa, he wrote to Freedman that he preferred writing about cannibals over Kwame Nkrumah, the hero of Ghana’s independence and the country’s first post-colonial prime minister. Freedman responded with similar venom in his own letters as we will see shortly. The archival documents I obtained enriched and complemented The New York Times news clips that I had read, dating back to the nineteenth century. At the conclusion of my research, the first magazine that I submitted my master’s thesis to, for publication, was the Columbia Journalism Review (CJR), reputed to be the bible of journalistic integrity.

My paper was accepted for publication on January 26, 1992, by Michael Hoyt. Hoyt was the editor, who later became executive editor.

Several months went by before I saw issues of the CJR and discovered that my article had not appeared in any of the issues. On April 27, I called Hoyt and demanded to know why my paper had not yet been published.

I was surprised when Hoyt, in a rather timid tone, informed me that a decision had been made not to publish my paper. He said the editorial board, consisting of five members, “after long discussions,” had been deadlocked, with two editors voting to publish and two opposing publication. He claimed the executive editor at the time, Suzanne Levine, cast the decisive negative vote.

When I asked why some editors were opposed, Hoyt said, “There was a feeling these things happened a long time ago.” Of course I was enraged and demanded to have my paper returned.

I still recall the chill I felt when Hoyt asked me why I wanted it back. “After all,” I recall him saying, “it’s been extensively edited and it’s not the same as what you gave us.” I insisted that my paper be returned to me, and he finally acquiesced.

Grand Reception by the Cannibals. (Book plate, 1890)
Photo credit: Adventures in the Great Forest of Equatorial Africa and the Country of the Dwarfs / Google Books

To this day, I am convinced that I would never have gotten my paper back — and never would have discovered how the CJR editors had committed journalistic cowardice and betrayal — had I not immediately gone to Hoyt’s office to retrieve my paper.

When I read the edited version of my paper, which was in galley form in preparation for publication, I discovered that the editors had inserted the following paragraph on my behalf — unbeknownst to me and without my consent:

“Recently, the Times granted me access to its archives, including correspondences from the 1950s, when the paper sent Bigart to Africa on a temporary assignment. After studying the archival material, I interviewed several present and former Times reporters. The following excerpts from that material and from lengthy interviews are not intended as an indictment of the Times—whose African coverage has occasionally been distinguished—but as a means of highlighting a problem that all news organizations need to address.”

After reading their insertion, I could only conclude that the CJR editors were afraid of possible reaction by editors of the Times whom they were afraid of offending.

I decided to do the CJR editors a favor. On October 29, 1992, I sent a shorter version of my original master’s paper to the Times with a letter addressed to the publisher, Arthur Ochs Sulzberger, Jr. In the letter, I wrote that a “bitter gripe” had lodged in my chest as a result of the CJR’s journalistic betrayal because of its editors’ fear of the Times.

I had been made to feel as if I had committed a crime when, in fact, I had gone into the paper’s own archives and discovered evidence of culpability by Times’ editors and reporters in perpetuating racist stereotyping of Africans.

Eventually, I received a letter from Joseph Lelyveld, then the Times’ managing editor and later executive editor. He wrote that he was responding on behalf of Sulzberger and that, indeed, my research had unearthed articles with “crude and ugly” language. He also argued that, on the other hand, the Times had published insightful articles about Africa through the years, citing that he too had been a part of the coverage, first as a correspondent in South Africa and later as Foreign Editor.

Prior to my graduation, I felt a small measure of vindication when my paper won the James Wechsler Memorial Prize from the university. After graduation in May 1992, I sent my article to several publications — including The Village Voice, The New Yorker, Mother Jones, Atlantic Monthly, Harper’s, and New York Magazine. When all of them declined to publish it, I could not help but recall the episode with CJR.

In the meantime, students who were aware of the paper invited me to speak about it, ironically, at the Graduate School of Journalism at Columbia, and later at Columbia‘s School of International and Public Affairs. And in February 2002, I presented the paper when I was invited to Williams College, in Massachusetts. It received a warm reception, and several students asked me when I would turn the material into a book.

As it turns out, I have since broadened the scope of my research over the years to include other publications in addition to the Times, such as National Geographic, Time Magazine, and Newsweek. My study now included the popular journals of the European travelers who “explored” Africa between the eighteenth and nineteenth centuries. In fact, these journals were the original media responsible for perpetuating the racist representation of Africa throughout Europe, in the Americas, Asia —and even in Africa itself.

Europe’s Own Ignorance and Superstition

I’m not here to romanticize Africa’s past. To claim that Africa was some sort of paradise before the arrival of Europeans is false and wishful thinking. There were conflicts and there were also despotic regimes: yet, these do not diminish Africans’ claim to humanity. There were spectacular achievements and there were great civilizations, in Egypt, in Ghana, in Songhay, in Buganda, in Zimbabwe, and in many other areas that predated contact with Europeans. As my book shows, these realities were not reflected in any of the writings of the so-called explorers, European colonial officials, and later, professional journalists who wrote about Africa.

Moreover, the portrayal of Africans as superstitious “savages” belied the fact that Europeans themselves were very experienced in some of the practices for which they denigrated Africans. In his book,

“Africa, long thought of as breeding ground for the occult, was more than matched by Europe, with its own manias for alchemy, astrology and witch-burning. In the 15th century, superstitious parishioners often danced among the graves in churchyards in hopes of protecting themselves from the plague — while the skulls of plague victims peered quizzically at them. During the same period, Germany was burning an average of two witches a day.”

“Europeans, moreover, were constantly duped by promises of miraculous transformations and cures. Elixirs of life, magnets to attract diseases from the body, magic potions and healing fragments of the ‘true cross’ were common. Even such prominent intellectuals as Thomas Aquinas and Roger Bacon searched relentlessly for the philosopher’s stone, the mystical charm of alchemy, which was supposed to transform dross into gold.

“Yet, despite all their delusions, Europeans thought of themselves as paragons of dignity and

Sensibility — while regarding faraway Africans as frightened primitives and painted witchdoctors.”

Had I not been betrayed by CJR, would I still have embarked on the journey that resulted in this book? I believe so. I had always been infuriated by the negative representations of Africans and African descendants in Western media. I am not so naïve to believe that any book will ever eliminate offensive and racist representations of Black people or of any other non-White peoples for that matter .

There are powerful entities and interests that benefit from the deep-seated prejudices that have historically driven Western media’s representations of Africa. The racist characterizations justified and sanitized the crimes committed against Africans, from slavery, through colonialism and through the new-colonialism, now maintained by the International Monetary Fund and World Bank.

Milton Allimadi, winner of the James Wechsler Memorial Prize in International Journalism, is the co-founder, publisher, and editor of The Black Star News; an adjunct professor at John Jay College; a frequent guest on Inside City Hall, WBAI, and Voice of America’s Straight Talk Africa. He has a graduate. degree from the Columbia University School of Journalism, and an M.A. in economics from Syracuse University. He runs a free weekly journalism workshop for local residents in Bedford-Stuyvesant, Brooklyn. He was born in Uganda and is the son of a former prime minister of Uganda.