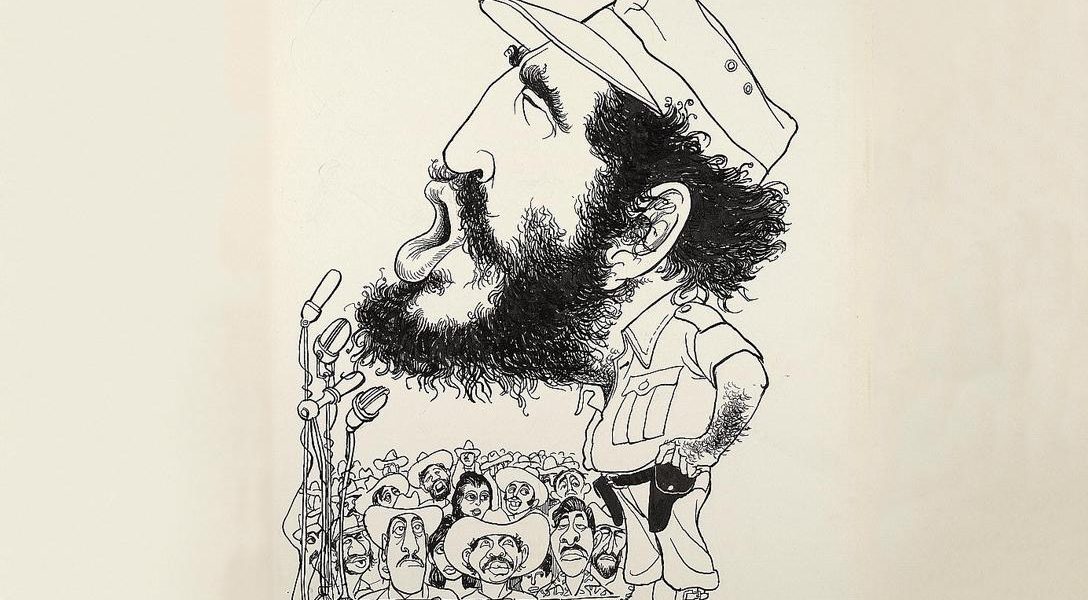 This is Part 3 of a three-part series of excerpts from Castro’s speech of November 23, 1963.  Please go here for Part 1, and  here for Part 2. [Note: these excerpts have been compressed.]

A few days ago an incident drew my attention. This was while the Inter-American Press Association Conference was taking place. [In Miami.]  It was a scandal, because several governments were… crudely attacked, like the government of Brazil, by a certain Mexquita, who said horrible things about the President of Brazil, who even… called for a coup in Brazil… against other presidents, against other Latin American countries, there in the United States, and he made long tirades… against the speech delivered by Kennedy in Florida, because the speech… was disappointing for a number of persons who favor a more aggressive policy against Cuba. [Ed: Castro learned of these comments through a series of cables.]

“I believe a coming serious event will oblige Washington to change its policy of peaceful co-existence.”

Many met in the offices of the revolutionary organizations and in their homes, to listen to President Kennedy over the radio. The Spanish translation broadcast over the radio station of the exiles.They listened when the President said: “We in the hemisphere should use all the means at our disposal to prevent the establishment of another Cuba in the hemisphere.”

That is, they did not accept the fact he said “to prevent the establishment of another Cuba in the hemisphere,” because they thought that it carried with it the idea of accepting one Cuba.

Many exiles had hopes of more vigorous statements to liberate Cuba from communism, but nevertheless, some felt that the US government was waging a secret war of infiltration against Castro that could not be disclosed.

It [cable] says that thousands of exiles attended an open air rally in view of Kennedy’s arrival, and they heard criticism because of what they described as a weak US policy toward Cuba.

Jose Ignacio Rivero, Editor-in-exile of the Diario de La Marina, the oldest Havana newspaper (he will stay there all his life), and Emilio Nunez Portuondo, former President of the United Nations Security council, called for more positive action by the United States.

Rivero, a member of the Inter-American Press Association, where Kennedy spoke, expressed his doubts over a sinister intrigue among international politicians. That is an “intrigue ” because they want to co-exist with us…

It [cable] says: “He also said in the meeting that ‘the weak US policy towards Cuba and other American nations is an international shame.’” This was said by Ignacio Rivero… who has to be linked to the ultra-ultra elements in the United States.

“Miami Beach: Latin American newspaper publishers and editors in response to the speech delivered by President Kennedy tonight… said that he had not taken a strong enough position against the communist regime of Fidel Castro….”

Augustin Navarre of El Espejo of Mexico, felt that the speech was extremely weak and that his observations on Cuba were not sufficient…  He added that “it was necessary to rescue Cuba under Fidel Castro from Communism and not to maintain the status quo.”

They are speaking against any coexistence.

Other Cuban newspaper owners in exile made similar statements. A series of cables began to arrive. Here: “The president of the Cuban Medical Association in exile, Enrique Huerta, stated that the speech did not clarify any of the fundamental questions related to the Cuba problem …

The newspaper added that the weak policy followed by the Kennedy Government in respect to Castro, as a result of the policy followed by his predecessor Eisenhower, made it possible for Castro and Khrushchev to cement Cuba into a police state, where the people have practically no hope of successfully rebelling without large-scale outside help.

The newspaper continued: “Kennedy now refuses to allow Cuban exiles to launch attacks against Cuba from US territory.”

What is the difference between that way of thinking and taking advantage of the assassination of their President to carry out that policy? See what some of those reactionary circles thought about Kennedy… “Kennedy now refuses to allow Cuban exiles to launch attacks against Cuba from US territory, and in fact uses US air and naval power to maintain Castro in power.”

That is to say, they accuse Kennedy of using naval and air power to maintain Castro in power.

“There is a considerable difference,” says the newspaper, “between this attitude and the daring words about Cuba said by Kennedy during the 1960 Presidential campaign…”

So there was observed a current of unanimous criticism against what the ultra-reactionary sectors considered a weak policy toward Cuba….

Julio Mexquita Ciro, an utterly shameless reactionary who went there to speak against the President of Brazil to carry on a campaign against Brazil and to promote a reactionary, fascist coup against Brazil — see what he says:

“Julio Mexquita Ciro… who yesterday moved the editors of the IAPA meeting with his analysis of the economic and political situation in his country, said it was an error on the part of the United states not to have realized the danger that the presence of Cuba meant for the whole continent. Mexquita was in favor of collective action, armed collective action by the hemisphere against Cuba, because ‘I am a defender of free determination of nations,’ he said.”

Mexquita, Mosquito, Mezquino, all means the same thing; just see how reactionary he is. The cable adds:

Why did he say this? Because he represents the oligarchy, the big landholders in Brazil, and as I was talking precisely about different shades of policy. Kennedy’s policy prompted a type of agrarian reform which is not revolutionary, of course, which is not revolutionary but which clashed with the interest of the oligarchs. And it is very strange that in these days, on the eve of the assassination of Kennedy, a coincidence as never before had been noted.

In the opinion of the ultra-reactionary sectors within and without the United States …. And this individual talks here about Kennedy’s primitive way of looking at the agrarian problem.

And then finally there is something very interesting – really very interesting … It [cable] says the third editor to express his opinion, Carbo… emphasized that there were no strong statements in favor of the liberation of Cuba like the statements that had been made in previous speeches by President Kennedy, especially in the one he made after the heroic battle of Playa Giron [Bay of Pigs]  —  that “heroic battle” where every one of them ended defeated and imprisoned- forecasting the crisis of the communist regime of Cuba. He claims in “Cuba the situation of the government verges on the insoluble, economically, politically and internationally since Castro is no longer reliable, not even to Russia.”

But most important of all is how the statement made by this gentleman who holds an important post in reactionary intellectual circles in the United States and abroad as Director of the Executive Council of the Inter-American Press Association, how his statement ends -and this is what drew my attention. The editor of the confiscated Havana newspaper ended by saying:

“I believe a coming serious event will oblige Washington to change its policy of peaceful co-existence.”

What does this mean? What did this gentleman mean when he said this three days before the assassination of Kennedy?

What did this gentleman who holds an utmost post in the ultra-reactionary intellectual circles in and outside of the United States, the Director of the Executive Council of the Inter-American Press Association, mean in a cable that is not from Prensa Latina, but from Associated Press, dated November 19th, AP Num, 254, Miami Beach – when he said: “I believe that a coming serious event will oblige Washington to change its policy of peaceful co-existence?”

Was there perhaps some kind of plot?

Was there perhaps in certain civilian and military ultra-reactionary circles in the United States, a plot against President Kennedy’s life?

We are grateful to Dr. Martin Schotz who included this speech in his book “History Will Not Absolve Us: Orwellian Control, Public Denial, & the Murder of President Kennedy.:” (Published by Kurtz, Ulmer & Delucia, December 1996)