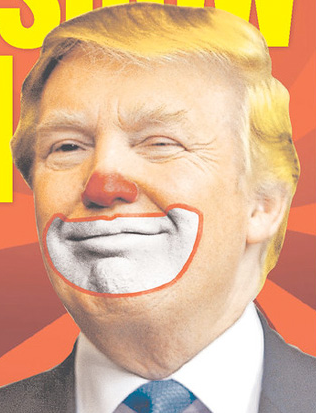 Talking about Donald Trump’s presidential campaign is about as useful as discussing Lincoln Chafee’s or George Pataki’s ambitions for the White House — except those two actually held elected office at one point. Yet, if you’re a ‘name’ in America, you can be a politician.

Ok, ok, it’s a bit rich (pun intended) to request that the media stop discussing Donald Trump and then write an article about the man. But, let’s make this the final nail in the Donald’s coffin.

Below are a few lines from Trump’s announcement:

On terrorism: “Islamic terrorism is eating large portions of the Mideast. They’ve become rich. I’m in competition with them.”

On the future of the Affordable Care Act: “Remember, Obamacare really kicks in in ‘16. 2016. Obama’s gonna be out playing golf. He might even be on one of my courses. I would invite him, I actually would say it. I have the best courses in the world so I’d say, you know what if he wants to. I have one right next to the White House. Right on the Potomac. If he’d like to play, that’s fine. In fact, I’d love him to leave early and play.”

On John Kerry and the Iran nuclear talks: “I will stop Iran from getting nuclear weapons. And we won’t be using a man like Secretary Kerry that has absolutely no concept of negotiation, who’s making a horrible and laughable deal, who’s just being tapped along as they make weapons right now and then goes into a bicycle race at 72-years-old and falls and breaks his leg. I won’t be doing that. And I promise, I will never be in a bicycle race — that I can tell you.”

Does any of this make sense? No.

We all know that politics is a circus and all circuses are filled with clowns that are fun to laugh at. This is nothing new. The problem is that Donald Trump is getting equal — if not more — coverage than actual politicians. Why? Because he is a prime beach ball to knock around for talking heads on the Right and Left. Look at the gleeful way Jon Stewart and Stephan Colbert are celebrating the announcement, and look at the defense Fox News and IJ Review give to the real-estate mogul. Add to that list the media-hungry celebs, like Cher, Sarah Palin, and Russell Simmons, who feel the need to weigh in.

Reactions from actual politicians and pundits, on the other hand, have spanned everything from eye-rolling to outright horror at Trump’s declared candidacy. See Charles Krauthammer and George Will‘s reactions. However, their opinions fall to the wayside. After all, Trump has connections to right-leaning (as Fox & Friends contributor) and left-leaning media (NBC’s The Apprentice) — and clowns get ratings.

So should voters take Trump’s campaign seriously? No. Why? Because any GOP candidate that refers to Mexicans as “rapists” and “murderers” (when Republicans are so desperately hoping to perform better with Hispanic voters), has an NBC show set for production in September, and has to pay for “supporters,” is no candidate at all. Instead, he is a distraction that should be collectively ignored.