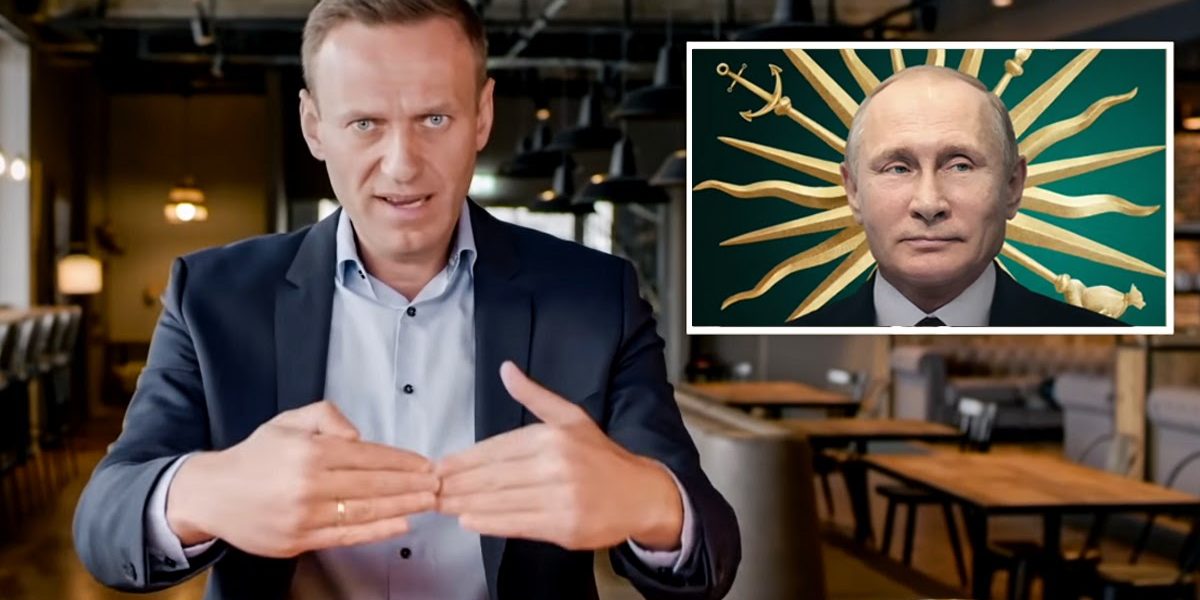 Over the past decade, Vladimir Putin has referred to opposition leader Alexei Navalny as “that character,” “the aforementioned citizen,” “the other politician,” and “a sick man.”

“I’m like Lord Voldemort,” Alexei Navalny told me in a 2018 interview. Navalny sees Putin’s reaction to himself as roughly equivalent to how the Russian leader might react to the lead villain in the Harry Potter novels. “He can’t say my name out loud.”

Putin’s refusal to refer to Navalny by name, of course, is part of the Kremlin propaganda playbook. State-controlled television networks and tabloids portray Navalny as the epitome of evil, much like, well, Lord Voldemort. He is a “traitor,” a “NATO spy,” and even a “political pedophile” who “lures” teenagers to protest rallies.

But to Navalny, the vehement propaganda campaign indicates something different. He said in 2018 that Putin “is afraid of me, of my colleagues, of our [anti-corruption] campaign.” Navalny didn’t need the government-media propaganda machine to become the supreme opposition leader in Russia; he just needed to be oppositional.

It is natural to ask how a 44-year-old disbarred lawyer managed to become the emblem of oppositional politics in Russia, where independent publications can be counted on the fingers of one hand. Navalny’s popularity is even harder to understand considering that Kremlin-controlled television is still the main source of news for three-fourths of the population of 143 million. The answer is YouTube. By creating an alternative to Putin’s propaganda machine, Navalny converted himself into a social media mogul, churning out an endless stream of reports detailing the corruption of top officials and oligarchs, most of whom happened to be Putin’s ex-colleagues, neighbors, childhood friends, and sparring partners.

Navalny grew into the role gradually. When opposition leader Boris Nemtsov released a report on Putin in 2008, he printed a mere 5,000 copies — and personally handed them out to Muscovites outside a metro station. Nemtsov was assassinated in 2015.

In contrast to Nemtsov, Navalny prefaces each of his exposés, which include extensive bank records, photos, maps, and blueprints of properties, with a YouTube video that gets anywhere from a million to 40 million views. Until his recent arrest, Navalny anchored the videos, and his channel had 6.43 million subscribers.

The last video, released on January 18, was a 113-minute documentary describing a $1.35 billion palace, allegedly built by Russia’s richest oligarchs as a present for Putin.

The palace looks like the hideaway of a villain from a James Bond movie.

By mid-February, the video had been seen 111 million times — making it one of the most popular documentaries in Russian history, on par with Michael Moore’s Fahrenheit 9/11 and Netflix’s Tiger King.

“I think there is a very high level of storytelling — dramatically and visually,” says Askold Kurov, who filmed and co-produced Welcome to Chechnya, an award-winning HBO documentary.

In an early video, released in 2007, Navalny talks about exterminating cockroaches and flies. Bearded Muslims appear in the background. Navalny whips out a pistol and shoots an actor wearing a Palestinian headdress who tries to attack him.

The video was released by a nationalist group Navalny co-founded with Zakhar Prilepin, an award-winning author who later confessed to war crimes while fighting for pro-Russian separatists in southeastern Ukraine. In 2021, Prilepin joined a pro-Kremlin socialist party.

Navalny had just been kicked out of Yabloko, Russia’s oldest liberal democratic party, for his involvement with the 2007 “Russian March,” an annual rally of thousands of far-right nationalists, monarchists, and white supremacists who advocate the expulsion of Central Asian migrants and the termination of government subsidies to Russia’s mostly Muslim, violence-plagued North Caucasus region.

“It is a significant political event, and there is nothing dangerous about it,” he told journalists in 2011.

A veteran human rights advocate recalled a falling out with Navalny over his views.

“He told me one phrase at the time, and it stuck in my memory, ‘Only Russian nationalism has a political future.’ And I thought — that’s it, lad, we’re not communicating anymore,” Lev Ponomaryov, who heads the Moscow-based For Human Rights group, told Meduza.io in 2017.

Navalny’s platform may have been flawed. He lost his campaign for Moscow mayor on an anti-migrant platform in 2013 despite his substantial following. Navalny stopped attending the Russian March and toned down his nationalist sentiment, focusing on anti-corruption investigations as his Fund to Fight Corruption sprouted offices from the Baltic to the Pacific.

These days, some of Navalny’s supporters dismiss his nationalist past, noting that he appears to have tilted towards leftist socialism — and has transformed himself into Putin’s archenemy.

“His rhetoric changed. At least, I have not heard anything related to nationalism anymore,” said Aleksandr Siriskin, a Moscow-based actor and theater director, who was sentenced to seven days in prison for taking part in the January 31 pro-Navalny rally that attracted tens of thousands throughout Russia and resulted in almost 6,000 arrests.

By the mid-2010s, Navalny managed to mobilize crowds of tens of thousands, despite the threat of beatings, hefty fines, and arrests. He admitted that many of the people attending saw the rallies as a way of standing up to Putin without necessarily agreeing with Navalny’s views.

“This is a wave-like movement that no one controls and, in fact, no one understands, including me,” Navalny told me at a 2014 rally supporting political prisoners.

Ten months later, Navalny received a 3 ½-year suspended sentence for allegedly “stealing” $500,000 from two companies. The European Court for Human Rights called the judgment “arbitrary and manifestly unreasonable.” His parole was eventually extended to the end of 2020.

Navalny, warming to the power of social media, put together a production team, trained himself as a host, and began using trendy clickbait tactics, including memes and animation, a live channel, and carefully selected Instagram photos.

In 2017, Time named Navalny among the 25 most influential people on the global internet. At the same time, his team became a target of investigation and persecution.

Lanky, slightly stooped, with tousled fair hair, clad in a creased white and blue shirt and darker blue jeans, Navalny met me in the Moscow headquarters of his Fund to Fight Corruption for the 2018 interview. The police had just raided it and confiscated leaflets, laptops, and handouts.

Months earlier, unidentified assailants had doused Navalny with a green chemical that nearly blinded his left eye. The attack was a prelude to what Navalny and Western governments called an attempt to kill him with Novichok, a group of weapons-grade chemical agents.

Comatose, he was flown to a German clinic to undergo a slow, painful recovery. The Kremlin threatened to imprison him for parole violation, but nevertheless he returned to Russia in mid-January. He was detained at the airport and sentenced to two years and eight months in jail on February 2.

The trial made some Russians, including those who dislike Navalny, realize that Putin has crossed the final political Rubicon separating tyranny from autocracy.

“February 2 is the day justice died in Russia,” said Marianna, a lawyer at a successful Moscow firm, withholding her last name because she feared losing her job.

“When we are asked, ‘Navalny or Putin?’ — it is a strange question,” the craggy-bearded, 31-year-old Siriskin told WhoWhatWhy. “Because we really have no choice, and that is why Navalny is part of the force that demands this freedom of choice.”