A Respected Former Western Journalist Kidnapped by the Taliban

Little is known about the status of Peter Jouvenal, a former journalist who spent more than four decades covering wars in Afghanistan and is now a hostage of the Taliban.

Jouvenal was considering investing in the new government and was visiting an ordinary house  he hoped to rent in Kabul when he was seized on December 11, 2021, by a group of armed Taliban. The kidnappers were reportedly operating under the orders of Abdul Haq Wasiq, the Taliban’s director of intelligence. The abduction added Jouvenal’s name to a list of more than a dozen Westerners recently kidnapped by the Taliban.

Jouvenal, who has dual British and German nationality, first went to Afghanistan to cover the Afghan-Soviet war as a photographer more than four decades ago. Over the course of a long career, he frequently worked as a cameraman and field producer for CBS News and CNN. He eventually converted to Islam, met and married an Afghan wife, Hassina, who now lives in England with their three daughters, opened a popular Kabul guest house, the Ganymede, and developed several Afghan business ventures.

With the new Taliban government in Afghanistan keen on rebooting Afghanistan’s collapsed economy and attracting foreign investment, Jouvenal had returned to Kabul to take care of family business and explore the potential for new ventures under the Taliban. He was particularly interested in the prospects for mining. Geological surveys indicate that Afghanistan has potential mineral reserves that, if developed, could be worth nearly a trillion dollars and are already attracting considerable interest from both China and India.

Apart from business possibilities, Jouvenal was also concerned about the country’s humanitarian situation and the fact that millions of ordinary Afghans now face destitution and eventual starvation. Since he first began covering Afghanistan in early 1980, Jouvenal has concentrated on focusing world attention on the plight of Afghans, documenting their armed resistance against the Soviets and efforts to help refugees caught in the conflict between the Taliban and NATO. Last May, he worked on a proposal for the Geneva-based Oslo Forum outlining how a UN-administered interim government consisting of respected Afghans from all walks of life might be able to bring about a genuine peace. 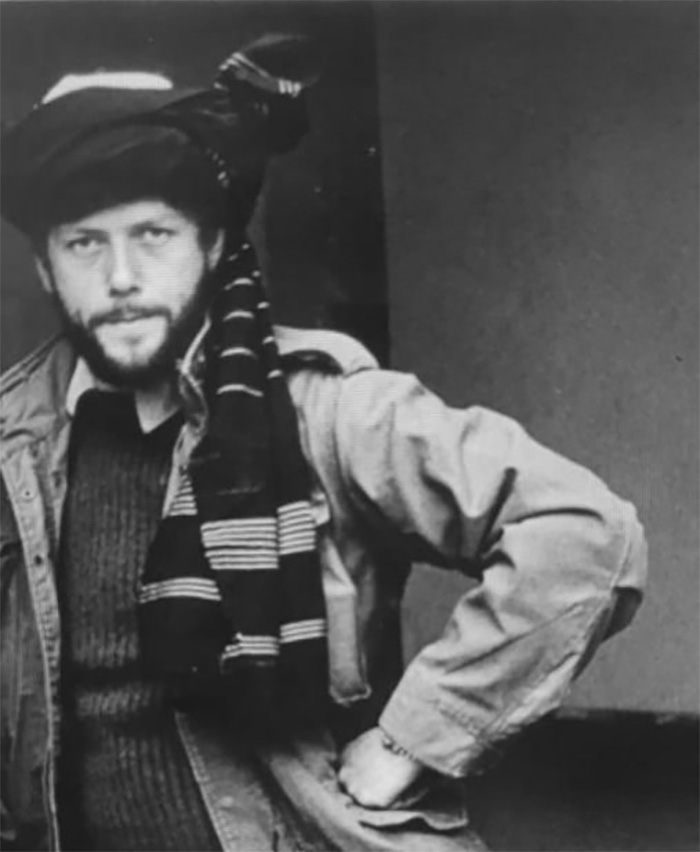 A Man of Afghanistan Ready to Talk With Anyone

Ever since Jouvenal’s incarceration more than two months ago, Wasiq’s Intelligence office has maintained silence, refusing to explain why he is being held prisoner.

The absence of any information from the Taliban has led to speculation about possible motives, including a suggestion that someone in the Taliban intelligence apparatus might have accused Jouvenal of having had links to al-Qaeda or ISIS, apparently based on his having worked as a cameraman on the CNN team that managed to get an interview with Osama bin Laden in the 1990s. Photographs from that long-ago reporting assignment are still circulating on Google, and the Taliban, who are now engaged in a fierce struggle with Afghan groups friendly to ISIS, may have drawn a mistaken impression from seeing the decades-old photographs. Recent bombings targeting both Afghan civilians and the Taliban are believed to be the work either of ISIS or of rival Talib factions.

Another complicating factor is that Sirajuddin Haqqani, who heads the Taliban’s Ministry of Interior and is one of the Taliban’s three deputy chiefs, is a hardliner. Ironically, Jouvenal, in his capacity as a journalist, had often interviewed Sirajuddin’s father, Jalalludin Haqqani, who founded the Haqqani Network. At the time, Jalalludin was directly supported by the CIA during the Soviet war, as were a number of other Afghan commanders. Jalalludin had shown particular respect for Jouvenal’s courage and the fact that he had demonstrated he was willing to risk his life to report the Afghan story.

Several weeks ago, Qatar’s ambassador to Kabul reported incorrectly that he had seen Jouvenal and other Western prisoners (up to a dozen of different nationalities are believed to be held). The ambassador insisted that the Taliban’s foreign prisoners were all being treated well. In fact, the ambassador had only been allowed to see two Westerners, both of whom were eventually released. The ambassador apparently knew nothing about the others or the conditions under which they were being held. Since then, British diplomats have been able to visit Jouvenal and some of the other prisoners, but only for less than 15 minutes. The day after the visit by the British diplomats, Jouvenal was allowed to talk briefly with his wife on a mobile phone, but only with the Taliban present and listening.

Other sources have reported that Jouvenal and a number of other Western prisoners, along with some Afghan prisoners, are confined to several small prison cells. The cells are lit artificially, and since electricity is out most of the time, they are subjected to long periods of total darkness. The only food they receive is boiled white rice mixed with occasional beans. His sole contact with other people is when they are allowed out for ablutions. Jouvenal is also suffering from health problems, although his spirits are said to be high. 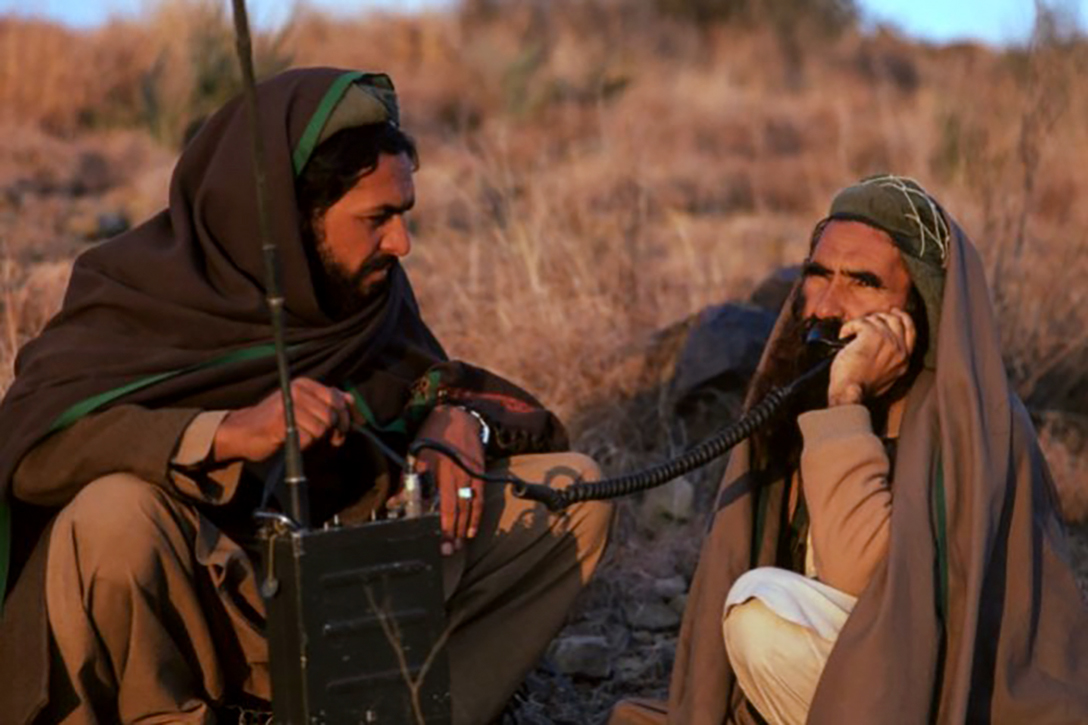 Jalalludin Haqqani (right), a leading Pushtun resistance commander during the Soviet war supported by the Americans during the 1980s, went on to found the Haqqani Network, a insurgent organization that joined the Taliban in 1995. Peter Jouvenal filmed with him during the 1980s, winning considerable respect from the mujahideen. Haqqani died in 2018, but his son Sirajuddin Haqqani is now Minister of Interior and a key member of the Talib leadership. Photo credit: Courtesy of Tim Weaver

Not Yet Seen by the ICRC

The International Committee of the Red Cross, which has always enjoyed respect in Afghanistan, including from many of the Taliban, managed to talk to a visiting delegation of the Taliban in Geneva earlier this month. The question of detainees was raised then, but until now the ICRC has not managed to see Jouvenal. The ICRC says that its ability to operate has been severely curtailed by last month’s cyberhacking of its worldwide databases.

Another leading concern is that Jouvenal and other detainees may have been caught up in internal squabbling among the Taliban. Today’s Taliban consists of different factions and tribal influences. It is difficult for the Talib leadership in Kabul to present a united front, particularly if it does not control all its commanders and factions in the field or elsewhere in Afghanistan.

Both Wasiq and Haqqani have personal reasons for feeling bitter toward the West. Wasiq, as former deputy head of Intelligence during the Taliban I regime (1996-2001), spent 12 years at Guantanamo. He was released with four others on May 31, 2014, in exchange for American soldier Bowe Bergdahl. Haqqani, who still has a $10 million US government bounty on his head, lost his brother Mohammad to a NATO drone attack in the Pakistani tribal agency of North Waziristan in 2010.

Two factors that may play in favor of Jouvenal’s eventual release are the fact that he is both a bona fide Muslim and is widely recognized for his largely unparalleled knowledge of Afghanistan.

Jouvenal has long argued that the West needs to adopt a more realistic approach toward Afghanistan by developing contacts within the Islamic militant movement. It is imperative, he has often said, to engage with the Taliban: “Unless you include them in the process, you will never have peace or a political settlement in Afghanistan.”

The irony is that without realizing it the Taliban have worked to silence one of the few people who might have been a powerful advocate for including them in international discussions and finally providing them a seat at the table.