Fake Democracy Is Under Attack. Is It Time to Try Real Democracy？

What follows will be an admittedly amateurish foray into domains of metapolitics. These are my thoughts. I circle around them, in an ever-recursive spiral.

The 1990s were called the “end of history” with the presumed victory of neoliberal hegemony. The following decade revealed that neither corporate globalization nor neoliberalism lived up to their promise. After the 2008 financial crash, the triumph of the liberal Democratic world order was no longer assured. We woke up to discover that our financial elites ran a fake economy.

The theme of the last decade has been the resurgence of the far right. Much of the world regresses toward authoritarianism and autocracy as the globalized world order breaks apart. The masses are scared, angry, and seek crude solutions.

I am a leftist who supports the US and NATO arming Ukraine, even though it means risking nuclear conflict. I do this while recognizing American atrocities across the world, from Iraq to Afghanistan to Chile to Vietnam — and going all the way back to slavery and genocide against the indigenous people.

I agree with the leftist/Chris Hedges analysis that the US is a behemoth ruled by plutocrats, oil barons, and the military industrial complex, where Democratic participation is basically a fraud. I also recognize that the US and Europe massively benefited from colonialism and imperialism. According to a recent analysis, England looted $43 trillion from India alone, between the 18th and 20th centuries. (They are asking for it back).

All of this is to say that Putin could have good reasons to feel animosity toward the West. But mainly, he is narcissistically fixated on Russia’s past and future greatness. He desires vengeance for Russia’s past humiliations.

It is true that the US and Europe failed to provide the support and assistance that former Soviet countries needed after the collapse of the USSR. As Naomi Klein chronicled in The Shock Doctrine, we sent our economists into former Eastern bloc countries to help them privatize state-owned enterprises, forcing market-driven capitalism down their throats. This led to the current system of oligarchs and kleptocrats — and to Putin, who believes the breakup of the USSR was the greatest tragedy of the 20th century. He has conceived it as his sacred destiny to undo it, even if this requires mountains of corpses and cities razed to the ground.

I don’t find, in anything I read, a satisfactory, full-spectrum, multidimensional analysis of our current geopolitical situation. We need to analyze historical trends, cultural differences, psychological traits, religious ideologies, class conflicts. We need an overview of the global economy, the debt structure, the petrodollar. We need to map on top of that the reality of the Earth’s remaining mineral and fossil fuel resources — a fundamental element inciting global conflict — as well as the trajectory of anthropogenic climate change, already causing droughts, burning down forests, bleaching coral reefs, soon to get much worse.

We need to consider how the technologies that once represented “progress” in practice enable dictatorships, surveillance states, and mind control, and how technology propels our world toward Orwellian doom. Then we can start to talk!

Dictatorships are rigid, inflexible structures. Anyone put in a position of unrestricted power will eventually go insane. Whether it is Putin’s robotic, almost mindless war on Ukraine; Bolsonaro’s assault on the Amazon and its people; or Jinping’s disastrous zero-COVID policy, dictatorships inevitably unleash deepening catastrophes. They can only hasten humanity’s plunge toward extinction.

But, unfortunately, in the other corner we have liberal democracies mortally wounded by hypocrisy, deception, short-term thinking, corporate and financial corruption. Even in their current, limited form, democracies tend to be messy and cumbersome. One president immediately seeks to undo the work of the last one. The buck is passed. Responsibilities are fudged. In fake democracy, short-term political expediency makes more sense than planning according to long-term wisdom and forethought.

What would that look like? It would look like continuous, ongoing participation for anyone who wants to participate — not just once, every few years, in relatively meaningless elections, but every day. This seems — to me, anyway — a reasonable, attainable goal. I explored how it could work in How Soon Is Now.

Obviously, there is a causal link between media technologies and political or governmental systems. We could not have had far-flung empires like Rome before writing allowed codes of law to be codified and shared across the lands. We could not have had liberal democracies before Gutenberg invented the printing press. This allowed for the distribution of news and basic information to the voting populace.

Today’s liberal democratic governments still run on 18th- and 19th-century media and social technologies that have become obsolete. Modern governments were designed at a time when information moved at a slower pace and, in fact, the pace of change was much slower than it is today. We need a major upgrade, in other words, to our political operating system.

The system that I, admittedly, still only vaguely envision would allow for everyone to vote continuously in a wide variety of areas, from local concerns to global ones (and perhaps, eventually, beyond). The system would work through proxies. For example, I know that I am not an expert in energy, so I proxy my vote to the person I trust most in that area. That person might amass thousands or millions of supporters over time. However, if I find out that person is corrupt — taking kickbacks from the oil companies, for instance — I do not have to wait years to get them out of office. I can immediately proxy my vote to someone else. 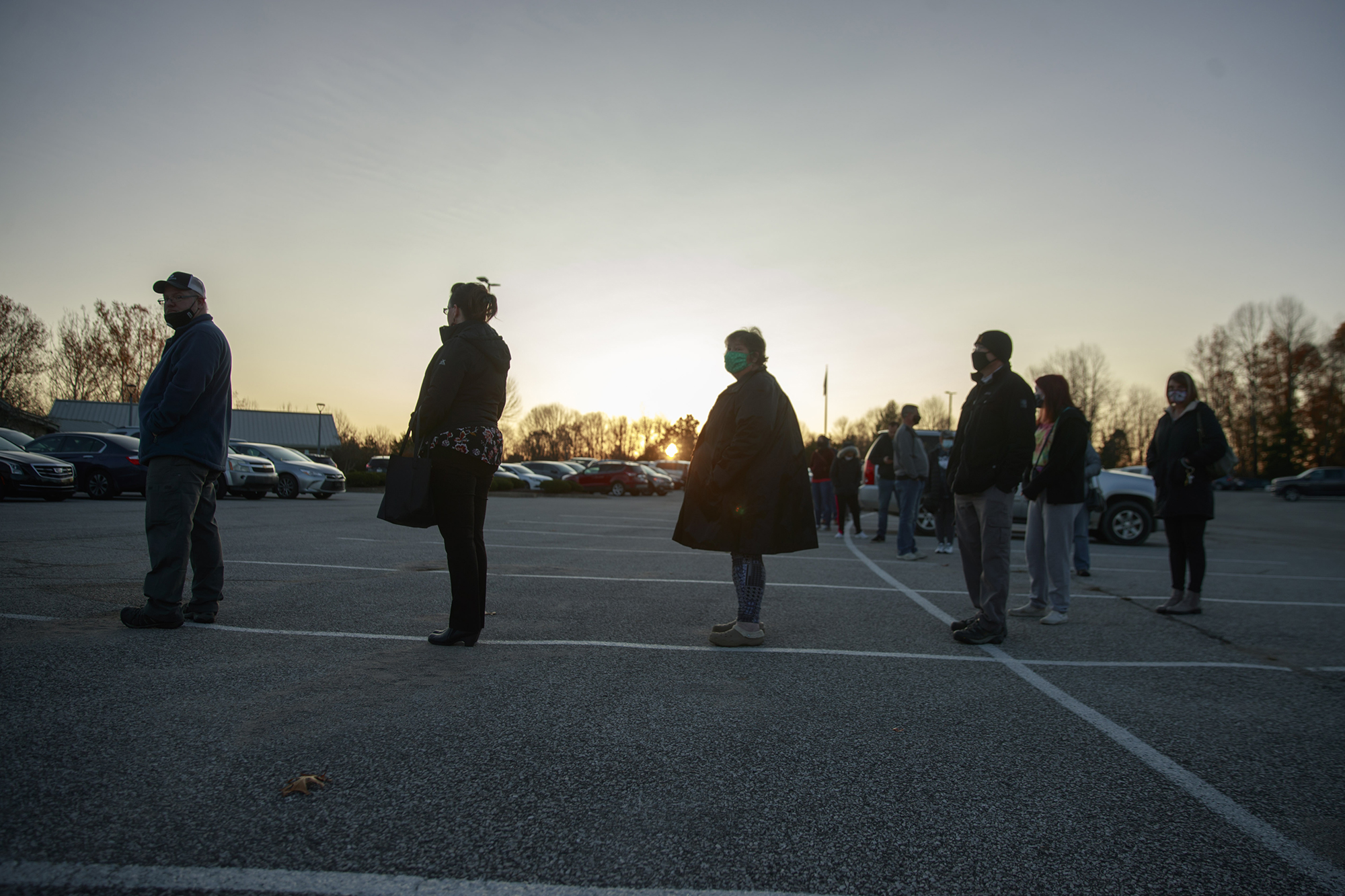 US voters are voting in larger numbers as threats to democracy increase. Photo credit: © Jeremy Hogan/SOPA Images via ZUMA Wire

I know this is just a wisp of a sketch, and even in writing it, I begin to squirm at the massive amount of detail that would need to be filled in. Even so, I find it amazing that we don’t seem to have any well-funded experiments underway, testing variants of participatory democracy in different regions or localities, designed for the instantaneous Internet age. This could be the truly useful destiny of blockchain.

The cumbersome, overly bureaucratic, inveterately broken nature of contemporary government serves the interests of those who gain from perpetuating the status quo. As we know, the Founding Fathers of the US Constitution designed the US government “as a representative republic, where enlightened delegates of the people would serve the public good,” according to The Atlantic, to avoid what George Washington called “the evils of democratical governments.” The Constitutional Convention of 1789 was partly called as a result of Shay’s Rebellion, where poor farmers rebelled against a system that kept them in debt servitude.

I bring this up to make a larger point: The US Founding Fathers feared that true democracy would lead to mob rule. The mob would inevitably rebel against the system of private property and elite privilege they intended to maintain.

Personally, I don’t find a clear separation between political and economic systems. What we have is a political economy that takes various forms. A new participatory democratic system would inevitably lead to very deep changes in the apportioning of wealth and resources across society. This is why billionaires like Musk and Bezos prefer to colonize outer space rather than using their resources to solve systemic problems here on Earth.

I support the West’s arming of Ukraine and I believe that Russia needs to be defeated in this conflict because this is, indeed, an existential struggle. While liberal democracies are far from perfect, they allow for a level of freedom of thought and dissent, as well as creativity, innovation, and social experiment that disappears with totalitarian control. In fact, we need liberal democracies to go much further in the direction of social experiment and innovation: to iterate, from within themselves, the next, far more egalitarian and participatory operating system, to ameliorate their own deficiencies.

I realize this seems unlikely.