Ernest Hemingway in the Public Domain

“The Ernest Hemingway brand represents the qualities most readily associated with the American literary legend. The brand embodies the spirit of romance and adventure espoused by one of the great personalities of the 20th century.”

I could have quoted at length from Ernest Hemingway’s The Sun Also Rises, because this year his first great novel has finally entered the public domain. But in many ways, Hemingway himself has  been in the public domain for decades, and as the Ernest Hemingway Collection explains, he’s “nearly as famous for his legendary lifestyle as his writing. A true sportsman and outdoorsman, Hemingway traveled the world pursuing his passions.” This is the persona the lifestyle brand has chosen to go into business with.

Hemingway appears to have escaped the cull of dead white male authors who have disturbed current sensibilities, a circumstance that might have something to do with the reassessment of his persona. Last year a PBS documentary, co-directed by Ken Burns and Lynn Novick, showed a much more complicated author, who felt overshadowed by his third wife, played with gender, and, beset by depression and ill health, ended his life in 1961. But the Hemingway Collection is sticking with the old man and the sea (the expert fisherman, that is, not the book).

When Hemingway was a toddler, his mother sometimes dressed him up as a girl, pretending that he was his sister’s twin. This gender confusion turned out to be a watermark throughout his life, and the documentary reported that he liked his wives to cut their hair short and sometimes played role-reversal games in bed. His unfinished novel The Garden of Eden, published posthumously, addresses this sexual ambiguity. But it was never addressed publicly, and he had a shaky relationship with his third child, Gerald, who eventually (long after his father’s death) transitioned to become Geraldine.

The last decade of Hemingway’s life, ironically when he had his greatest commercial success and was awarded the Nobel Prize, was a torturous time for him. A brief television interview shown in the documentary, recorded in 1954, shows him so halting and shattered he resembles a hostage forced to deliver a statement he doesn’t believe or even quite understand (he was apparently reading his answers off cue cards). Still recovering from his latest illness, his enunciation is almost childlike, his voice slightly fey; it’s almost irreconcilable with his work and image. This sad denouement to one of the greatest American literary careers of the 20th century is understandably of no interest to those hawking Hemingway products.

There can be a tenuous connection between a celebrated figure and his or her marketed brand. The Marilyn Monroe estate, left largely to her acting guru Lee Strasbourg, ended up in the control of his second wife’s daughter, who established Marilyn Monroe, LLC and recently sold it to Authentic Brands for between 20 and 30 million dollars. But often it’s aggrieved or underfinanced (greedy?) offspring that monetizes the family name, which explains the Fiat Picasso and Graceland. It’s unclear from the Hemingway Collection website which family member is behind this venture, but someone clearly smelled an opportunity.

You could blame this excessive marketing on the curse of modern-day over-commodification, but clearly the Hemingway business people have made a conscious decision to trade on a fatigued image. There’s a link to the PBS documentary, so presumably they’ve watched it, but apparently very little of it actually sank in, because the Collection makes no reference to this more nuanced and interesting figure. There’s no man-sized slip to wear during a cross-dressing night of sex play, and the skin care products don’t include lipstick. But there’s also no lifejacket or parachute to commemorate one of the most accident-prone writers of his generation. During his lifetime, Hemingway suffered extensive shrapnel wounds from the First World War, pulled a skylight down on his head (giving him a lifelong scar), shot himself in the calves of both legs while trying to wrangle a shark, and survived at least two car crashes, a motorcycle crash, and two plane crashes (in two days) while touring Africa.

Finally, of course, he shot himself in the mouth, which was no accident.

I have no idea what kind of posthumous image he’d have wanted to project, or even if he had cared. But I’m also not sure how comfortable he would have been with a company promoting his tired image as macho hero and sexual athlete (does that explain the brand mattresses?). As he grew older, this representation did him no favors, and ended up confusing a difficult reality. No one can be sure why someone else chooses to end their own life, but the gap between his public image and his true self must have been difficult to reconcile by 1961. Sexual ambiguity and mental illness have only recently attained their acceptability and understanding, and only in certain parts of the world. 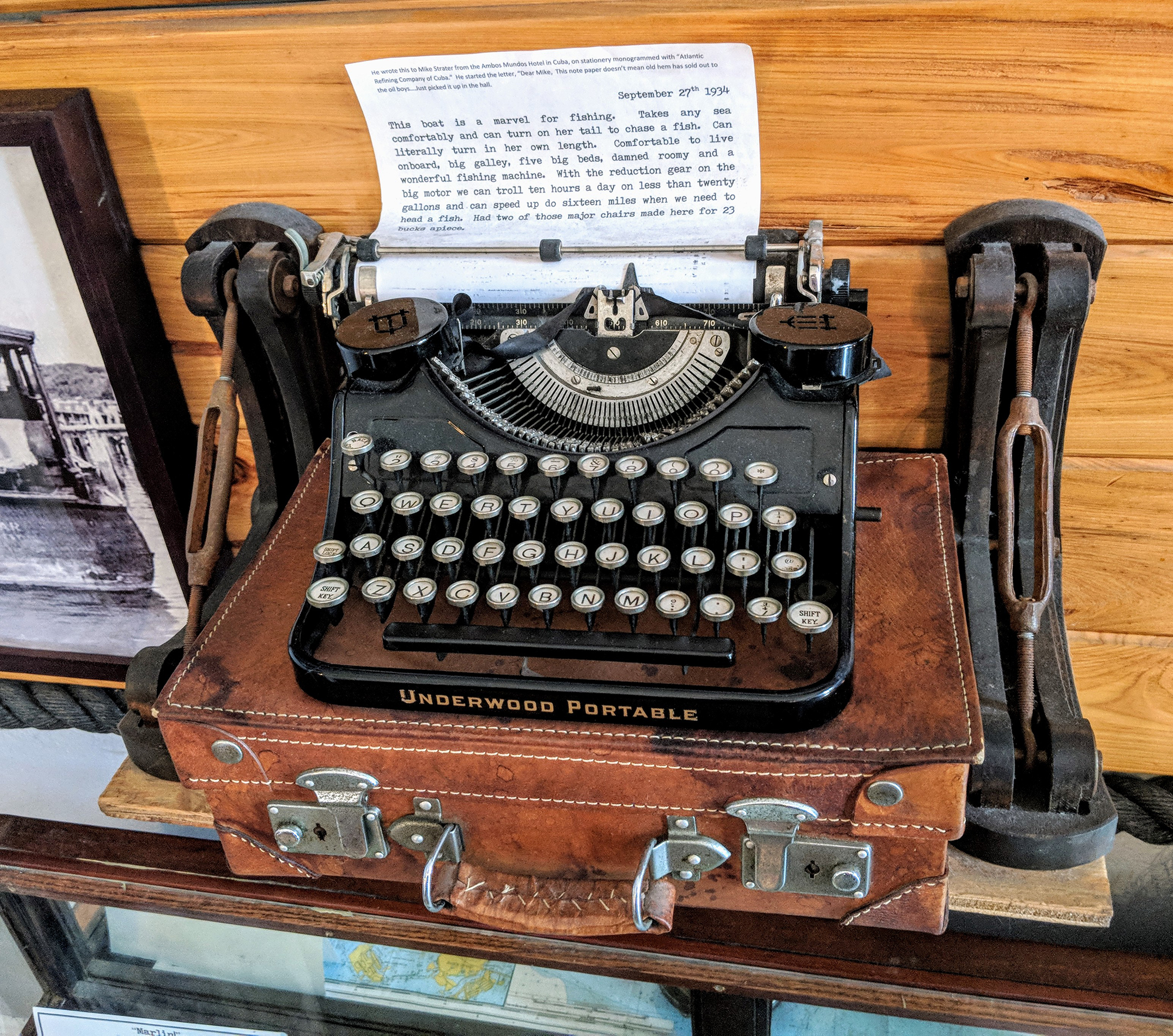 But all this, of course, is tangential to his work. His life may have turned out to be more interesting to a modern audience than many expected, but it’s still the books that have to mark his reputation. If he survives at all, it’s as one of the most potent and recognizable literary voices of the last century. My guess is that’s what his preferred legacy would have been, and perhaps he would have regretted creating an image that has in some ways obscured his true achievement.

The Hemingway Collection offers a writing app, designed with “proprietary algorithms to suggest corrections for simpler, clearer writing. It’s like having the master at your side while you write.” I.e., write like Hemingway! As a writer, this strikes me as a clear misunderstanding of what writing is about, that all you have to do is lop off a few adverbs and adjectives, and hey presto, For Whom the Blog Tolls. Style is a very personal thing, and the idea that Hemingway’s can be replicated by an app is perhaps the most insulting aspect of the Collection’s whole ethos (I prefer the mattress).

I recently reread The Sun Also Rises, and I’d forgotten what a sharp and fresh read it is — aside from the casual antisemitism and racism that was endemic to its time (T.S. Eliot shared this unfortunate trait). Jake Barnes is a neutered figure, wounded in the war and unable to express his love, either physically or emotionally. But we care for him anyway, admire his fortitude and willingly follow him on his adventures. I’d say that’s true of his creator as well.