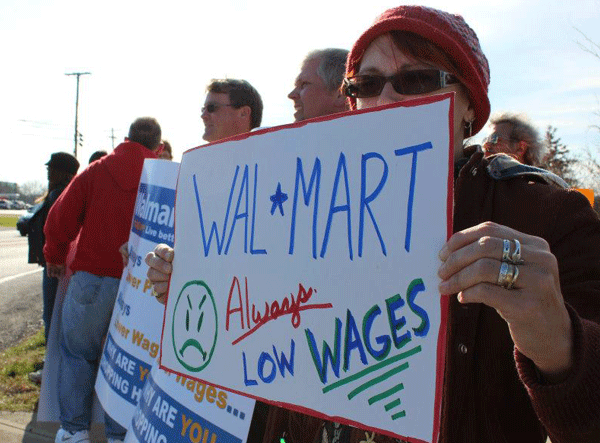 Retail powerhouse Walmart prides itself on providing customers with “everyday low prices.” But labor experts believe the retail giant scored itself a public relations bargain with a much-publicized but less-than-generous pay increase for some of its workers.

For more than half a century, Walmart has paid its 2 million-plus employees such depressed wages that many full-time workers cannot live on them. So many full-time employees are on state and federal welfare programs.

That’s how Walmart ended up becoming the single largest private-sector beneficiary of public assistance. U.S. taxpayers, according to Barry Ritzholtz of Rithholz Wealth Management, “have been subsidizing the wages of this publicly traded, private-sector company to the tune of $2.66 billion in government largesse a year.”

The world’s largest company by revenue has long pushed back against every labor pressure to increase wages, hours, and benefits. So why is Walmart really raising wages for half a million of its associates?

Walmart has seen a 44% annual turnover rate among its hourly employees—a marked difference from the 6% turnover rate at rival Costco. That’s because Costco pays workers an average of $20.89 an hour, while Walmart pays $12.85.

This practice may cost more than it saves. The Harvard Business Review estimates that for “skilled and semi-skilled jobs, the fully loaded cost of replacing a worker who leaves (excluding lost productivity) is typically 1.5 to 2.5 times the worker’s annual salary.”

Joel Naroff, chief economist at Naroff Economic Advisors, believes that “Wal-Mart’s move to raise their employee pay base is a sign that the labor market has already tightened.” Moreover, Walmart may just be trying to stop its workforce from leaving for better opportunities as the economy improves.

These explanations are largely consistent with Walmart’s messaging. “In recent years we’ve had tough economic environments, a rapidly growing company, and fundamental shifts in how customers are shopping,” Walmart CEO Doug McMillon wrote in a letter to workers announcing the pay hike.

Other retailers, including Trader Joe’s, have long paid even rookie workers above minimum wage. This year, Starbucks raised pay for its baristas and shift supervisors, and last year, The Gap announced its minimum hourly rate would increase to $10.

Another explanation for the hikes is that Walmart’s wage raise may help stave off the union threat posed by insider protest groups such as the Organization United for Respect at Walmart (OUR Walmart).

People unionize when their needs are not being met. They think of unions when— for instance— wages are so low they need food stamps to buy from the place where they work, or when there is a food drive for them. If Walmart were to change this situation and provide them with what they need, what motivation would there be to unionize?

To date, unions have not found success at Walmart. Unions cost employers money in the short term and Walmart expends substantial effort to fend them off: it went so far as to create an anti-unionization guide.

But over the last four years, OUR Walmart publicly criticized Walmart’s labor policies via rallies held at peak shopping times such as Christmas. The goal: achieving a $13.00 minimum wage and stable work schedules.

But that success may have an unintended effect, she said. “They want to show people that they care, but now I’m afraid we’ll see our hours cut. If you get a raise and you don’t get the hours, that balances out to zero. Associates see this as just the same story, but a different page,” she told WhoWhatWhy.

As of now, Walmart has not agreed to provide its employees full-time work with regular hours.

A Raise That Isn’t Such a Raise

Notably, Walmart’s promised salary increases aren’t even close to the minimum wage OUR Walmart wants. According to the retailer’s announced changes, over the next year, new associates will receive $9.00 an hour during training and at least $10.00 after.

Now compare that with what old-timers receive. They are in line to receive just a 1% increase for their full-time work: a mere 15-cent raise to $13.00 an hour.

So why does Walmart get a win? Because they can say they met the $13-an-hour demand, even though it’s only partially true.. for some. Meanwhile, Smith’s group is battling for a $13-an-hour minimum wage for everyone. For that to happen, new associates would have to be given that rate as well.

Even if Walmart keeps workers’ hours intact, will an increase of 1% really enable its full-time workforce to live without relying on government subsidies funded by taxpayers?

Some labor experts simply dismiss all of the above as factors in Walmart giving its workers a small raise. They see a much simpler purpose.

Robert Reich, Secretary of Labor in the Clinton Administration and now senior fellow at the Blum Center for Developing Economies, told WhoWhatWhy: “Don’t believe what you hear about a tight labor market forcing their hand. At the lower end of the income ladder, the labor market is very loose—very high unemployment and many who have left the jobs market altogether.”

The bottom line, Reich believes: “They did it mainly for PR purposes. They were beginning to feel the heat from all the bad press.”

Outsized publicity for a 1% pay raise for full-time staff—now that’s bang for the buck.

Walmart is behind the push for higher minimum wage. They can afford it. Their competitors cannot. Once minimum wage increases it will put more mom and pop stores out of business and those people will then have to shop at Walmart.

Just because a business pays 1-3 dollars over minimum doesn’t mean it’s a livable wage. I think those classes of people who are used to making very good livable wages and the wealthy DO NOT understand the working class person’s dilemma, which is this: Anyone making minimum wage to about 5 or 6 dollars over minimum wage (maybe more) will inevitably have something happen in their life where they suddenly owe a big chunk of money, whether it be a hospitalization without medical insurance, a major car issue, or even having to get a couple crowns on teeth which cost about $1600 each now days, and they will be forced to BORROW the money somehow (probably with a high interest loan or credit card). Once they have a major debt to repay, it is all over for them. They will then become an indebted servant to the middle and upper classes, FOR THE REST OF THEIR LIVES. This actually ruins economies over time. IT EXTRACTS the wealth from those who are producing (the working classes) and transfers the wealth to those who are either in the Professional classes (doctors, lawyers, Government Administrators, and those running any business in the FIRE industry: Finance, Insurance, Real estate), AND/or transferred to the wealthiest. But it is MOSTLY the Middle to upper middle classes that are doing this to the working class person.

Eventually the weight of Debt and inability to participate in paying for their own way, will collapse the system…..along with the Federal Reserve’s (private central banking system) power trap over the entire nation.

A living wage is more dependent upon the required disposable income requirements of the employee than their income. If the employee can’t defer optional expenditures well enough to save for them, they will, inevitably, wind up in debt, with interest payments taking a substantial share of their income in comparison to those with no debt.
Having been a (paid for) vandweller since the mid 80’s, I can say with absolute certainty that it is far easier to lower ones cost of living than to increase ones income, especially with continuous double digit inflation being endemic during that time.

A few days ago the walmart that my boyfriend works for called everyone into the office one at a time and let them know that they would not be given the full amount of the raise that they were promised. Night workers that make a dollar more an hour were told they would be given a raise to at least ten dollars an hour when they first announced the raise with a promise of earning at least eleven dollars an hour by next february on the night shift. Now they’ve been told it will be $9.50 an hour and a dollar less if they decide to go to the day shift. They lied, but nobody is talking about it.