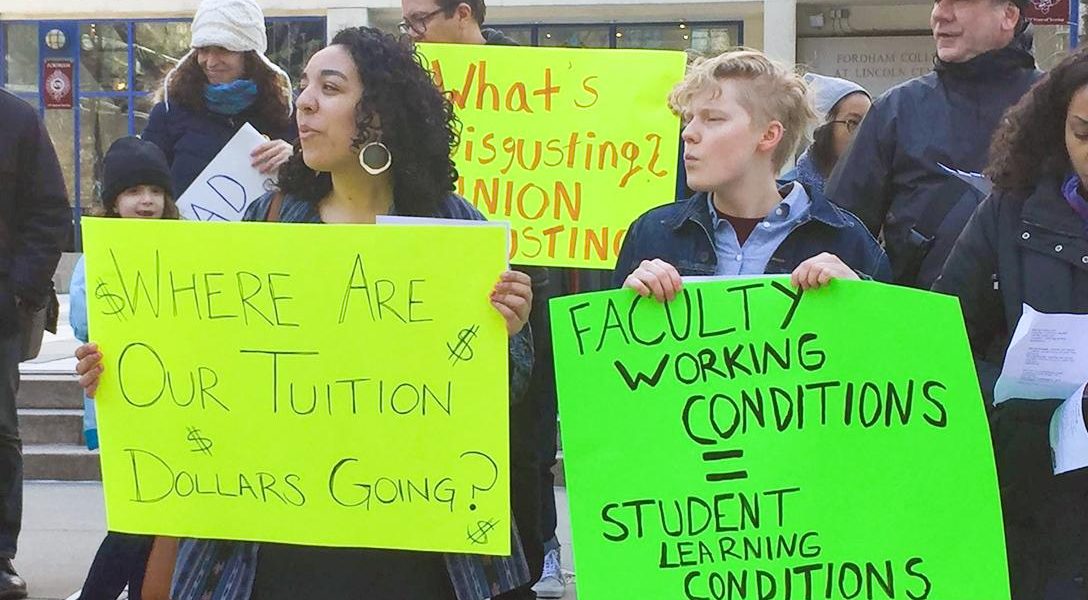 Fordham University: Tuition Over $45,000 — and Professors on Medicaid?

Large parts of the faculty at one of the most expensive universities in the world are struggling to make ends meet and rely on government assistance while their students pay close to a quarter million dollars for a four-year program.

It is not cheap to attend Fordham University, known as the Jesuit university of New York City. The tuition and fees are $47,317. Add room, board, and other miscellaneous fees, and the total comes out to a whopping $67,457. Even with financial aid, most students are paying tens of thousands a year for a Fordham education.

With fees that high, one would expect that all members of the school’s faculty would make a decent salary.

But they do not. Prospective students visiting the Fordham campus at Lincoln Center on April 8th were greeted by a crowd of protesters equipped with megaphones, signs, and flyers. The crowd was demanding a livable wage and healthcare for all faculty, and calling out the university administration for its apparent unwillingness to provide it. At the heart of the dispute is Fordham’s increasing use of adjunct faculty.  An adjunct professor is officially a part-time employee, meaning there are little to no benefits included.

They are paid per course taught each semester, and there is no guarantee that they will be hired for the next semester. Most adjunct professors have multiple jobs to make ends meet.

Chris Brandt, an adjunct in the Communication and Media Studies department, said he does not make enough at Fordham to live a sustainable lifestyle.

“If it were not for Social Security, I would not be able to both eat and pay my rent,” he told WhoWhatWhy.

Alessandro King, another adjunct, commented on the issue of health care. He said they are offered something called the Fordham Bronze Medical Plan.

“As of last December, zero adjuncts had signed up for it, possibly because it costs $822.20 a month,” King said. “I took a staff member’s suggestion and signed up for an ACA plan.”

Where Does the Money Go?

Brandt estimated that about 17% of student tuition pays all the faculty, but he is not sure of this number because the administration has been secretive about how tuition dollars are used.

Referring to his estimate, he said, “If this isn’t true we’d like the administration to come out with it.”  The faculty, he claimed, has been asking for answers for the past couple of years.

In an April 13 email sent to the university community, Bob Howe — Assistant Vice President for Communications and Special Adviser to the university’s President Father Joseph McShane, S.J. —   insisted that discussions between administration and faculty “have been — and continue to be — cordial, frank, and productive.”

Howe gave very different numbers than Brandt, stating that “92% of our operating revenue comes from tuition and student fees, and 63% of the University’s costs are related to the salaries and benefits of those who work at the University.”

He expressed optimism that the issue will be resolved, despite the fact that the Faculty Senate plans to hold a no confidence vote in Father McShane. After failing to get answers — even when they directly petitioned the university president — they decided to organize with Service Employees International Union (SEIU).

“It’s very unpleasant to do this but we feel we have absolutely no other option because the university won’t talk to us,” Brandt added.

In response, Fordham administration’s legal team announced their intention to delay the union vote, claiming the faculty’s petition “calls upon the Board to exert state power to regulate and interfere with religious freedom, liberties and beliefs.”

Their claim that unionizing interferes with Jesuit beliefs is raising eyebrows considering the Jesuit order’s and Catholic Church’s historical stance on the matter. St. John Paul II once stated that unions are “indispensable” for a just society.

Adjunct faculty were permitted to unionize at Georgetown University — which, like Fordham, is a Jesuit school — and at Catholic schools Trinity Washington University and Saint Mary’s College of California. However, Fordham is not the first religiously affiliated university to make such a claim. According to National Catholic Reporter (NCR), an independent news source covering topics on the Church, three Catholic universities in Chicago contended that the First Amendment entitles them to be exempt from National Labor Relations Board jurisdiction in 2016.

“Our understanding of the law, Catholic social teaching on workers’ rights, and church doctrine on religious freedom convinces us this is not a valid exercise of religious liberty” said NCR writers Gerald J. Beyer and Donald C. Carroll.

Adjunct Professor of Anthropology Alan Trevithick said the announcement came as a shock to the faculty. Trevithick has been actively involved in the fight for better working conditions for the past couple of years. In 2015, he participated in a fasting campaign to raise awareness. Speaking directly to the visiting students and parents gathered on campus, Trevithick asked for the university to simply “find another process” to meet the faculty’s concerns if they do not wish to go through a union.

“We’re here to make sure they don’t use legal tactics to avoid their moral responsibilities to support the faculty, which is the heart of this university,” he said. “I encourage Fordham’s administration to agree to a fair process in a timely manner that allows for the non-tenure track faculty to vote on whether or not to join a union, and be given the same opportunity for unionization as many other employees and faculty at Fordham,” de Blasio said.

“I Object to Students Being Used as ATMs.”

Students, like Reyna Wang, a Fordham College at Rose Hill junior, have been rallying behind the faculty. Wang is a member of Fordham Students United, a coalition of student activists that has been supporting Fordham’s adjuncts for over a year.

“A union for Fordham’s contingent faculty benefits the entire Fordham community: contingent faculty would receive fair wages and benefits, securing their basic financial needs and allowing them to devote more time and energy to their students,” Wang said.

She also noted that students pay upwards of $6,000 for a class, “Yet adjunct professors, who make up more than half of our faculty, are paid around $4,000 a course.”

Professor King concurred with Wang’s sentiment. “It’s hard to overstate just how much the students’ education will benefit if the faculty is allowed to unionize,” he said. “With appropriate compensation and benefits, professors will be able to concentrate and provide the students with the attention and focus they expect and demand.”

The contingent faculty is refusing to back down. They will continue to rally and protest, and have plans to launch a public campaign backed by the Catholic Tradition.

For Brandt, it all boils down to one issue: “I object to students being used as ATMs.”

The author is a student at Fordham University.