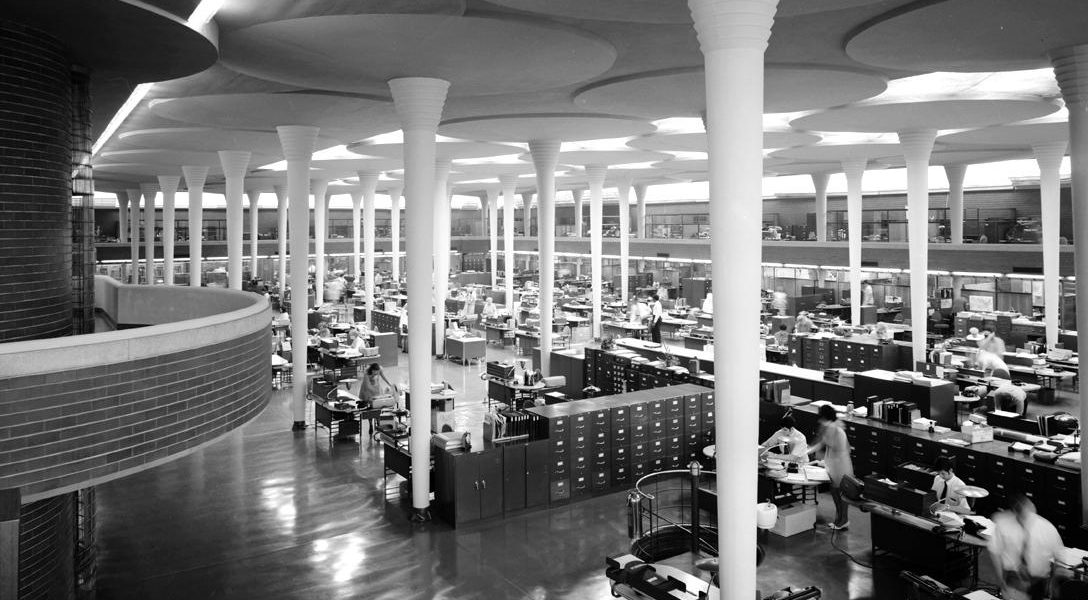 For Labor Day: the History of the Office (no, not the TV show)

Tomorrow is Labor Day, so we at WhoWhatWhy figured we’d write a little story that delves into our home away from home where we do most of our “labor” — the office space. It turns out offices have been around for a long time, in one form or another, from ancient Egypt to the House of Wisdom in the Orient, where one of the world’s major translation movements took place. Also, who knows what those cave paintings were really about? What we do know is that the Italians invented the word “office,” which comes from the Palazzo Uffizi in Florence, where 16th century Florentine magistrates spent their 9–5 life.

Like many other things we may be ambivalent about — soap operas and milkshakes come to mind — the commercial office had its birthplace in the US. The idea for office space was sparked by the newly invented electric lighting and telephones — as well as an increased demand by management for white collar workers. A prime example of an early office layout is the Wainwright Building in St. Louis, which houses several large-windowed rooms with between two and four desks each. The boss had the large corner office.

However, most white collar workers didn’t have the luxury of a room with a view. Based on the principles of factory efficiency promoted by Frederick Taylor, the majority of the early 20th century workforce spent their days in a large room with a sea of small desks, side by side. The idea was to squeeze in as many people as possible. Lo, the open plan was born.

In the 1930s corporations realized that the work space could also signal their brand identity as well as being more human-friendly. They started to focus on the aesthetics of the exterior as well as the interior. The Johnson Wax Administration Building in Racine, WI, designed by Frank Lloyd Wright in the late 1930s, became a turning point: a white-collar factory in a kind of cathedral space.

By the 1950s, air-conditioning and fluorescent lighting meant that offices could become windowless — no need for natural light … Of course, it was the lower-rank workers who were assigned spaces deep within the building core. Outer-wall offices with windows remained the domain of upper management; corner offices with multiple windows were reserved for CEOs and other top executives.
As office spaces swelled in size, employee job satisfaction decreased. Or, as Robert Propst, a designer at the furniture manufacturer Herman Miller, put it, “[T]oday’s office is a wasteland. It saps vitality, blocks talent, frustrates accomplishment. It is the daily scene of unfulfilled intentions and failed effort.” This observation led Propst to invent the cubicle in 1967. (The following year saw the invention of the Post-it® note, another US product.)

Little did Propst know that the quiet cubbyhole that he designed to promote job satisfaction would later become a symbol of job dissatisfaction and out-of-town business parks.

At the turn of the Millennium, however, there was a paradigm shift: The workplace turned into a lifestyle. The office plan became more diverse, with the introduction of new office typologies such as archipelagos, fields and city grids. With the catch-phrase “living the brand,” the office became a place for informal meetings and recreation, such as ping-pong tables and ballpits. The most notable examples of the “casual office” are advertising agencies and Silicon Valley tech companies, where the office is not only a place to work, but also a place to play.

Interestingly, in the last few years, something has happened in Silicon Valley. It seems that the “anti-establishment” tech companies are starting to mature. When Facebook moved into its new Gehry-designed building in Menlo Park, CA, which boasts the “largest open floor plan in the world,” the ball pit was still there, but the company had morphed into a more adult inhabitant. Guess the teenager has grown up.