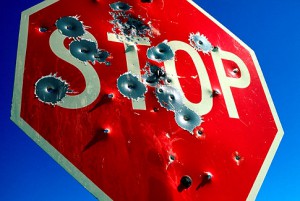 Controlling Gun Violence: Not a Prayer? Democrat Barack Obama: “Michelle and I are shocked and saddened by the horrific and tragic shooting in Colorado…. We are committed to bringing whoever was responsible to justice, ensuring the safety of our people, and caring for those who have been wounded. As we do when confronted by moments of darkness and challenge, we must now come together as one American family. All of us must have the people of Aurora in our thoughts and prayers as they confront the loss of family, friends, and neighbors, and we must stand together with them in the challenging hours and days to come.

Republican Mitt Romney: “Ann and I are deeply saddened by the news of the senseless violence that took the lives of 15 people in Colorado and injured dozens more. We are praying for the families and loved ones of the victims during this time of deep shock and immense grief. We expect that the person responsible for this terrible crime will be quickly brought to justice.”

Democrat Barack Obama: “Michelle and I were deeply saddened to learn of the shooting that tragically took so many lives in Wisconsin. At this difficult time, the people of Oak Creek must know that the American people have them in our thoughts and prayers, and our hearts go out to the families and friends of those who were killed and wounded….”

Republican Mitt Romney: “Ann and I extend our thoughts and prayers to the victims of today’s shooting in Wisconsin. This was a senseless act of violence and a tragedy that should never befall any house of worship. Our hearts are with the victims, their families and the entire Oak Creek Sikh community. We join Americans everywhere in mourning those who lost their lives and in prayer for healing in the difficult days ahead.”

“There…I am sure, will be…a day for discussion of the usual Washington policy debates, but I do not think today is that day.” – Obama press secretary Jay Carney, commenting on the Newtown tragedy, and on what might be done about the enormous number of innocent people killed by guns in America.