Can We Plow Through the Blizzard of Nonsense?

When you’ve spent your life working on the climate crisis, good news is hard to come by. So perhaps I’m jumping the gun — but I find myself feeling just the tiniest bit optimistic in recent days about the bottom-line general health of our society.

It began with the election. Though it was much too close, Americans managed to reject most of the truly depraved candidates — the Oz/Lake/Walker/Masters people who had sold their souls in particularly public fashion. We’ve had to take such people seriously since the night that Trump claimed the presidency in 2016; clearly the old norms were gone, and the price of citizenship was going to be constant vigilance. But those forces lost the next three elections, this one despite high inflation and low approval ratings for the president. It felt like democracy had lived to fight another day, and we’d get a bit of a breather before the 2024 follies began again.

That good feeling was quickly doused in the following days as Elon Musk stepped up his assault on his own employees, Twitter users, and any kind of decency. He was not just readmitting insurrectionists, anti-vaxxers, and antisemites to his kingdom, he was celebrating them. It’s been ugly as can be, and it is steadily getting worse.

Recently, Musk explained that Twitter would “follow the science,” which “necessarily includes reasoned questioning of the science.” One of the things this means in practice is that every climate denialist is emboldened, and all over Twitter. E&E News reported:

Earlier this week, a search for “climate” on Twitter resulted in “#ClimateScam” as the top term on the platform. Tweets using that hashtag were a miasma of climate disinformation, cherry-picked statistics and conspiracy theories. On another day, the top result was “climate lockdown,” a reference to the Great Reset conspiracy theory that claims a group of global elites is planning to shut down economic activity around the world to cut carbon emissions.

The planet’s most gracious climate scientist, Katharine Hayhoe, being an empiricist, demonstrated with an elegant little experiment that the number of trolls has increased by between 15 and 30 times. That meant that when she tweeted out “Climate change is real, it’s human-caused, its impacts are serious and there are solutions if we act now” it got 3,000 respondents mostly saying things like “other than the grant you received how much are they paying you to spread disinformation?” or “All climate changes are caused by Soros. Paid by Soros.” Some of the responses, of course, are not quite as polite, or as grammatical: When I tweeted recently about the need to stop burning trees for electricity, one typical response went like this: “Can you kiss my anal, in public?” Also, “u r probably a faggot.”

So, not fun. But — and this is a very tentative “but” — it doesn’t feel like it’s really catching on. From what I can tell, not that many people are really watching with admiration as Musk and his handpicked team of “reporters” uncover the past “crimes” of his company, which mostly seem to involve hardworking people trying to keep the ugliest sentiments in our society off their servers. (Donald Trump was watching — he called for the termination of the Constitution based on the fact that Twitter had not allowed the trading of pictures of the penis of his opponent’s son — but even that call was met with… not much.)

Just as with the constant screams about stolen elections during the fall campaign, it’s all been met with a bit of a collective shrug. But new polling finds that by huge, huge margins Americans think the government should be acting more aggressively to take on climate change. The message that seems to be settling in is: let’s get to work.

I don’t mean that this endless churn of disinformation isn’t dangerous — it clearly is. And especially at the local level. If, on the national scale, or even the scale of a statewide Senate vote, the dedicated disinformationists no longer seem quite so powerful, they can do enormous damage in those venues where a few people rule. So, school boards, where a handful of obsessives can make sure kids don’t get to read real books. Or rural counties where measles are now spreading thanks to the lie that vaccinations are dangerous. Or all the places where the fossil fuel industry’s handmaidens can gin up opposition to solar panels.

But even on Musk’s degraded Twitter, common sense has bigger triumphs than the endless whiners: Greta Thunberg managed, in nine devastating words, to not just deflate one climate-denying moron but to land him in jail. The thing most people remember about the right wing this week is George Santos, demonstrating once and for all the link between Trumpism and utter shamelessness.

So Musk feels a bit like the ‘second-time-farce’ version of Trump; the rapid fall in the stock price at Tesla shows that perhaps there’s a limit to how much stupidity you can get away with. He’s no longer the richest man in the world; since his following worships success perhaps he looks like… a bit of a flailing failure? And Trump, with his woebegone collection of NFTs, crude drawings of him in spacesuits or cowboy gear apparently just lifted from catalogs and stock image websites. He’s starting to seem like a loser too?

If one wanted to paint a hopeful picture of the next couple of years, it might look something like this: Inflation would continue to abate, and if we had a recession it would be short. People’s nerves would continue to settle. Republicans would go back to simply being tools of corporate wealth, and probably win some elections as a result. We’d reach a general — i.e., 70 percent — social consensus that vaccines were probably a good invention, that people should probably be treated fairly whatever their pronouns, that candidates who lose elections should concede graciously, that Putin is the bad guy in the Ukraine war. That we should do what we can to slow the rise of the temperature on the only planet that we’ve got to live on — like, use the money in the Inflation Reduction Act to put in some heat pumps and buy some EVs, to the point where they’re not mysterious or “alternative.”

Again, I’m not sure any of this will happen; the furies that have been loosed won’t be easily caged again. But perhaps we’re a tad closer? And of course this kind of normalcy would not represent salvation. What we actually need to happen is an ongoing and rapid evolution in the direction of clean energy, racial justice, and economic equality. But it’s hard to even have those conversations while craziness rules. If indeed I’m right and the fever is breaking a bit, we will have to work hard to solidify that shift in the zeitgeist; normalcy provides the solid base from which we can do the bigger work we must.

In other news from the world of climate and energy:

+As the indefatigable Leah Stokes points out, heat pumps outsold fossil fuel furnaces in the US for the first time this year! All of you who joined in our Heat Pumps for Peace campaign get a share of the credit. 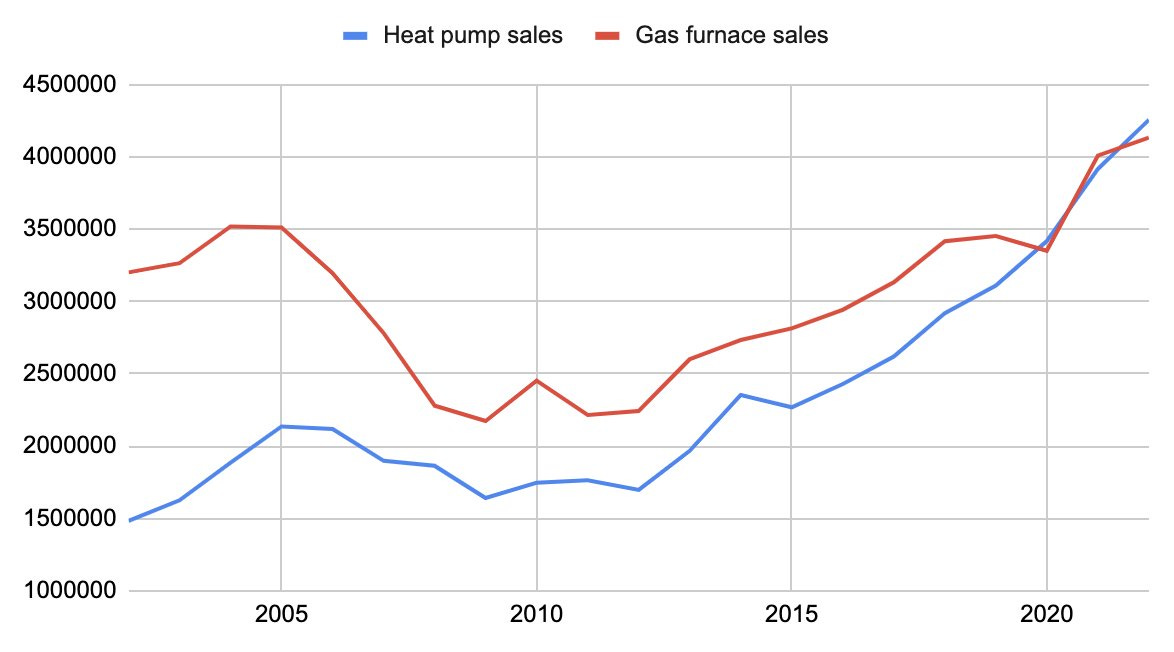 You can read Professor Stokes’ take on 2022 in general here, and my New Yorker piece analyzing the chances that the Inflation Reduction Act could lead to far more action.

+Mary Annaïse Heglar has a wonderful essay on burnout among climate fighters, especially those who have to deal with other burdens of living in this society. It’s worth a read from everyone as we plan on how we’re going to make change happen in 2023.

Last summer, after a year of running on empty, my body had one word for me: enough. Almost by compulsion, I cleared every calendar I could, arranged extended time off from my job, declined invitations and pitches, unceremoniously resigned from my seat on a nonprofit board, and gave up on any and all work travel plans. I started building a health team, including a Black woman therapist. I had decided to heal. And it wasn’t a road I could walk alone.

+And don’t forget — we’re less than three months out from the national day of action on banks and climate change. Start planning something cool!

A version of this piece was originally published in Bill McKibben’s newsletter, “The Crucial Years.”