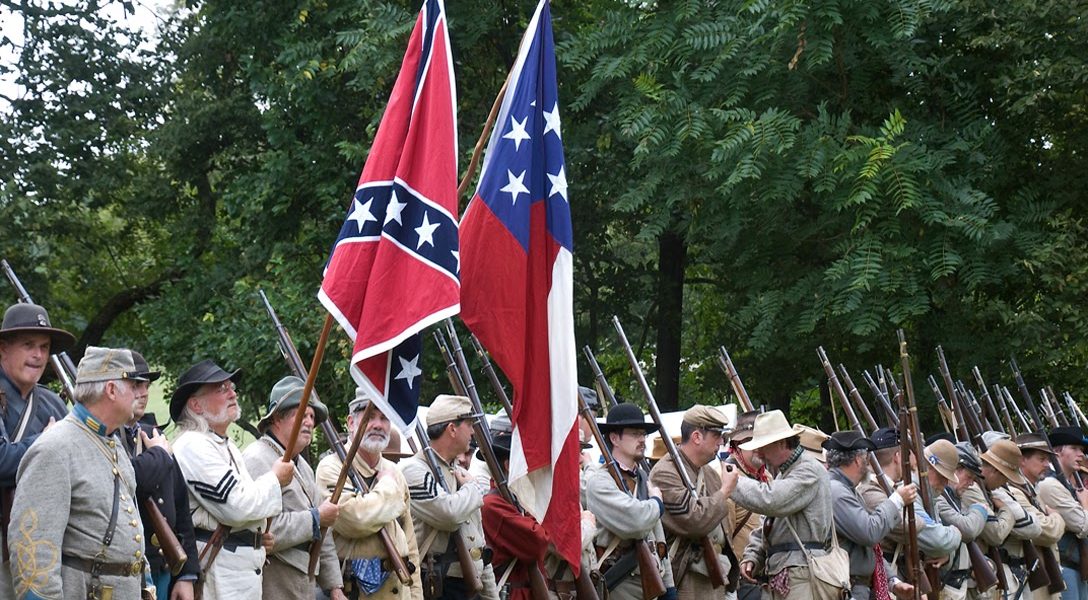 The Battle Fought at Gettysburg Is Far From Over

A visitor to Gettysburg, PA — the site of the battle in which Union forces finally turned the tide of the Civil War in their favor —  is confronted by Confederate iconography within minutes. It is everywhere. It is on burgers at bars, swaying on flag poles outside homes, in stores, on hats, t-shirts, and pint glasses. Many locals sport Confederacy-inspired tattoos. It is clear that the Confederacy is a part of the culture.

It was also in Gettysburg that Joe Biden recently made a speech calling on all Americans to put partisanship aside and think of the future of the country.

The Battle of Gettysburg is recognized as one of the most important battles of the Civil War. In 1863, 200,000 Americans fought each other over three days, leaving more than 7,000 dead and another 30,000 wounded. The Union came close to losing, but fought off the Confederate Army’s advance into Pennsylvania, a Union state.

Ironically, Confederate imagery now proudly outshines Union memorabilia in the town. People even wear t-shirts proclaiming, “The South will rise again,” and they are easy to find in stores if you want to buy one for yourself.

In the shadow of its bloody past, the Gettysburg of today is still divided by the unresolved ideological differences which led to the Civil War; it serves as a stark reminder of the kind of violence to which political differences can lead.

A significant number of people living in Gettysburg still identify with the Confederacy, and some still reject the idea that the Civil War was fought over slavery. As a state, Pennsylvania backed the Union, but today, you can see the Confederate flag proudly flying outside people’s homes. When I was a student at Gettysburg College, Black friends were threatened by “townies” because of their skin color; at the same time, many of the people I met there insisted that racism did not exist.

The Confederate battle flag may once have been tied to a nostalgia for the antebellum South, but today, that sentiment has been replaced by a more general call to the spirit of rebellion. It is particularly prized by white supremacists and ultra-right wing groups who promote their own ideologies.

Confederate monuments have divided communities for decades. Some people assert that they celebrate heritage and history. Others argue that they symbolize racism and injustice. In Gettysburg, however, the context is different.

Anyone who lives in Gettysburg is forced to identify with the Civil War intimately. When you walk through the town, you have the feeling that you are still living in the mid-19th century. Red brick buildings line the streets. Townspeople, wearing Confederate and Union uniforms, frequently reenact the entire battle. Women wear period dresses. The battle at Gettysburg still dominates many conversations.

It is increasingly clear that at this moment in time, the United States needs to have a tough conversation concerning which aspects of our history we want to commemorate, and how we do it. That conversation needs to bridge the divisions that prevent a coherent understanding of our past. Overly broad terms and loose historical references are no longer sufficient. Politicians in 2020 need to be precise. When Joe Biden makes an overly general statement such as “Injustice is real,” it accomplishes nothing, except to provoke the right and dissatisfy those who suffer from long-standing racial injustice.

Biden had an opportunity, while standing in vividly historical Gettysburg, to show how the past informs us today. Instead, we came away with nothing that we did not already know.

Gettysburg can be seen as a metaphor for the current confusion that divides the US. The statues that surround everyone in Gettysburg are intended to teach history, but instead they  inspire arguments about the meaning of race, and the motivations behind the Confederacy and the Civil War.

Scott Hancock, who lives in Gettysburg and is a professor of history and Africana studies at Gettysburg College, put up small flags that read “Black Lives Matter” in front of Robert E. Lee’s statue.  He stated that the flags were intended to say something about why the battle had been fought. The gesture triggered an angry confrontation with bystanders, including an old man dressed in a Confederate uniform and holding a Confederate flag, and a number of men in camouflage uniforms and carrying assault rifles. To complement the scene some motorcycle gang members revved their Harleys and made obscene gestures from the sidelines. Members of the crowd denounced Hancock for claiming that the Confederacy had fought the war to prolong slavery. Finally, Hancock told the crowd, “I guess you don’t want to hear what I have to say.”

A group of women formed the United Daughters of the Confederacy (UDC) in 1894 to ensure that Confederate history at the turn of the 20th century would be remembered positively. They popularized the narrative of the “Lost Cause,” a campaign set out to portray Confederate leaders and soldiers as heroes. As John A. Simpson outlines in Edith D. Pope And Her Nashville Friends: Guardians Of The Lost Cause, their efforts tapped into Southern sentimentality during Reconstruction, just as the South was devastated by the loss of the Civil War and economic impoverishment. As a result, the American South formed a personal attachment to the Confederate cause. The UDC made deliberate efforts during Reconstruction to solidify the public’s romanticized attitudes by erecting statues that they hoped would maintain a physical and imposing presence for hundreds of years to come.

Gettysburg is perhaps emblematic of the contentious narrative about the true purpose of the Confederate memorials. Statues line the streets telling the story of what happened in the fields in 1863. Yet, there is a striking imbalance in who has been immortalized. Of the 1,328 statues and monuments, none of them memorialize Black people. There is a statue of Sallie the dog, the 11th Pennsylvania’s “smallest member,” but no monuments in Gettysburg to remember the enslaved people who fled for their freedom. Black soldiers and townspeople fled Gettysburg before the battle for fear of being kidnapped and forced back into slavery. Although no Black soldiers fought at Gettysburg, it would be incorrect to assume that Black people were not a crucial part of the Civil War and the battle at Gettysburg, even though some history books mention them less. James M. Paradis’s African Americans and the Gettysburg Campaign documents Black Americans’ pivotal role in the battle with acts of civil disobedience and as soldiers. For the Confederacy, even, Black Americans as slaves were the “backbone of the Confederate war effort,” as emphasized by Smithsonian Magazine.

“Black people,” Hancock writes, “ultimately were the reason why over 165,000 soldiers came to this Pennsylvania town in the first place. But on the battlefield, as far as the physical memorials, they disappear… the beautiful lies of the Confederate state monuments, meanwhile, decorate main thoroughfares and are easily seen by the more than one million tourists who come through town each year.”

The imbalance in representation through monuments across the country happened for a number of reasons. Very few of the monuments went through extensive approval procedures. Instead, groups like the UDC paid for, put up, and dedicated monuments to the Confederate cause. At the time, people who may have opposed the erection of the statues, especially Black Americans, did not have a voice.

Notably, the majority of those monuments went up well after the Civil War ended, built in the years marking the beginning of the Jim Crow period during the 1920s as well as the civil rights movement in the early 1950s and 1960s. Northern states made concessions and paid for some of the statues, possibly to ease the politically tense climate between the Northern and Southern states. Reconciliation was prioritized, and the North’s passivity led to the proliferation of Confederate monuments scattered across the American landscape.

To this day, the Battle of Gettysburg spurs passionate feelings about the history of the Civil War. There is a vigil every year in November to honor the soldiers of the Civil War, and as a student I witnessed it all. Many residents in the town feel connected to the past because they can trace their own lineage back to the 1800s. People believe they are keeping the history of their families alive by representing the Confederacy. One key factor in understanding how the Confederacy is contextualized today is the widespread presence and misrepresentation of its flags. The Confederate States of America had multiple flags during the Civil War; the currently infamous flag, however, was not one of them. The standard with a red background, blue cross, and 13 white stars was the battle flag of Gen. Robert E. Lee’s Army of Northern Virginia. Its modern prominence can be traced to racist groups trying to counter the civil rights movement.

The first revival of the battle flag came after World War II. It was resurrected by the States’ Rights Party, aka the Dixiecrats, in order to symbolize the South and oppose segregation. The use of the Confederate flag as a symbol of segregation grew and became more explicit after the US Supreme Court’s Brown v. Board of Education decision.

In 1961, South Carolina first hung the battle flag for official commemorations of the centennial anniversary of the beginning of the Civil War, as K. Michael Prince notes in his book, Rally ’Round the Flag, Boys!. The flag’s place at the Capitol was officially confirmed by the state Legislature the following year, and it would remain there until 2015, when it was finally taken down following the Charleston church shooting.

Historians argue, however, that the purpose of hanging the flag at the Capitol was to symbolize Southern defiance in the face of the burgeoning civil rights movement. In the sixties, once again, the flag was used to symbolize resistance to what was seen as Northern aggression against the Southern way of life.

“The Confederate public symbols were not just appropriated to symbolize segregation in the South of the 1950s. Rather, these symbols helped to create, and were from the beginning, symbols of a segregated South. The emergence of the glorious public memory of the Lost Cause was as inseparable from the birth of Jim Crow as the war was from slavery,” writes Thornton.

During desegregation, the KKK also appropriated the symbol. In 1963, Governor George Wallace called for the battle flag to be raised over the state capital of Alabama as a response to Robert Kennedy’s efforts to promote integration. There were many other instances, as “Driving Dixie Down: Removing the Confederate Flag from Southern State Capitols” by James Forman, Jr. outlines.

The narrative today is that the monuments serve to teach history, but as Dr. Ian Isherwood, a professor at Gettysburg College, emphasizes, “The bigger question is: how can we take a conversation like the one we have seen and how can we have a serious conversation about the memorials in our culture? Are these monuments really about history or are they about the idea of memory. I don’t think they teach people a lot about history. They teach about the way in which people want to remember their history.”

For Black Americans, the Confederacy does not inspire nostalgia, but rather recalls historical oppression and resurrects it in a modern context.

Daina Ramey Berry, a professor of history at the University of Texas at Austin, told TIME that she hopes the statues will be taken to museums, which will allow them to be contextualized by historians to provide insightful lessons about the past.

As of now, it seems like the statues stand to provoke people, but they can be an opportunity for people to continue learning. Those who wrote the history of our past until now did not care to spend their resources telling the stories of Black Americans, and the landscape in Gettysburg shows it. The message of the monuments should be interpreted with a focus not only on who is depicted, but also who is not.