‘We are Ukrainians’ Photo credit: Courtesy of Anna Galushchak
Art

Portrait of the Artist as a Young Refugee

Ukrainian artist Anna Galushchak describes her art as an addiction that she can’t control. Even as she fled from Ukraine, she was thinking about the time that she was wasting, not working on her art.

Now, from a tiny room in Tallinn, Estonia, Galushchak is producing art that expresses the trauma of Russia’s war on Ukraine — and her own experience.

Her apartment and her family’s home in Bucha were heavily damaged in bombings. A gaping hole in the wall of her family’s bathroom opens onto the street outside. And in her studio apartment are the remnants of over 100 paintings, few — if any — of them likely to have survived the bombings and occupation unscathed. 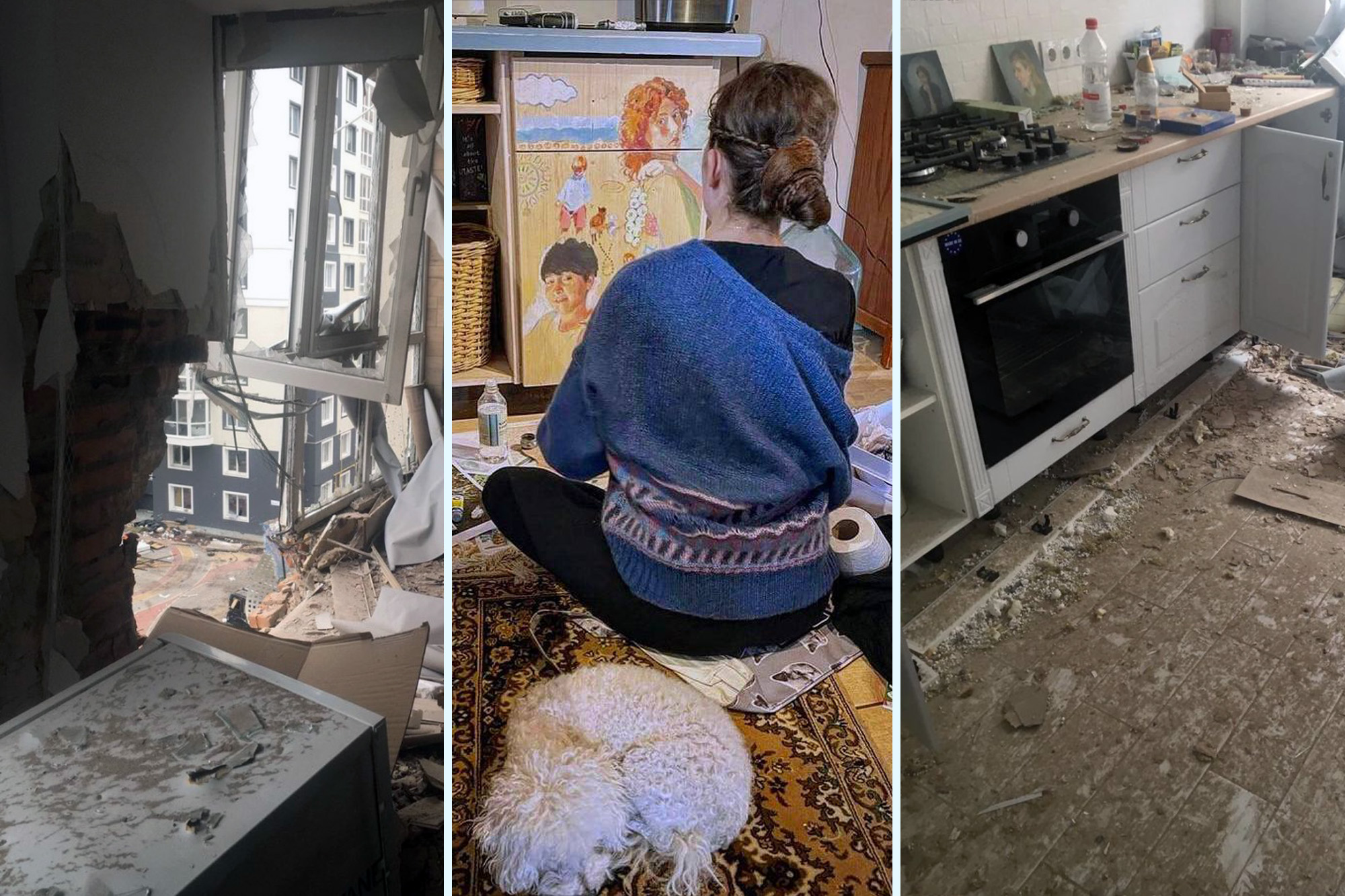 Bucha, a suburb just north of Kyiv, has become infamous for the atrocities committed by the Russians. Twenty-one-year-old Galushchak fled from there with her mother on February 25, the day after the war started.

Her father, as an able-bodied man required to stay in Ukraine, remained in Bucha. He moved into a basement across the street during the occupation. Meanwhile, Chechen soldiers took over the Galushchak family home.

“[Russian soldiers] just killed all of the people that they saw,” Galushchak told me in a phone call. “My father was living in a basement with 22 people and the owner of this basement. He [the owner] just came out once, and the Russian people, they just killed him. Just because they saw him.”

Galushchak said that the people staying in the basement figured out that the soldiers weren’t usually up early in the mornings, so they used it as an opportunity to lay the man’s body to rest.

“They buried him next to his house after a few days,” Galushchak said.

While the building owner’s decision had proven fatal, her father managed to escape to Kyiv with the family dog after 10 days in hiding.

“Some women called him and said that there is a green corridor and you can go. And people — all of them — just risked their lives, but they went to the place where they should be and they were evacuated [by bus]. So it’s just a fortune. And many people say that if you are in a basement for many days you understand that you are so tired of that state that you are able to take a risk,” Galushchak said. “You are very tired of that isolation, of that inability to go out and it’s even more frustrating than just to risk your life.”

When Galushchak and her mother first got to Tallinn, they stayed with her mother’s two sisters. But after a month, not having space to work in a crowded home, Galushchak started to feel crazy.

Her mother sensed Galushchak’s unease and rented her a tiny, but private flat, where Galushchak now wakes up, usually around 5 a.m., and immerses herself for the majority of the day in her passion — seven days a week.

It’s that passion that enabled Galushchak to support herself before the war as a full-time artist in Ukraine.

“Do not envy me because you don’t know how I suffer from that. It’s an addiction. When I left my country, I escaped from the war on the second day. I did really think only about why I don’t paint the whole day. I just don’t even accept realities as they are because of my profession, because of my passion,” she said. “And I’m addicted to it and I can refuse all other privileges of life — like love or something, relationship, or communication, because I have my passion. And when you can change your profession easily, you have more options just to derive pleasure from now, from the present.”

In her studio apartment, Galushchak had about 130 pieces and was selling them online, primarily to American art collectors. She generally no longer relied on commissioned pieces.

“It was a real happiness for me. I understood that before the war I could paint whatever I want, have an inspiration, and then sell it,” she said.

Now, she isn’t sure how many of her paintings survived Russia’s invasion, but she thinks that the majority — countless hours of labor — are likely to have been ruined.

“I’m so depressed about that. Even more than about my damaged flat,” Galushchak said. 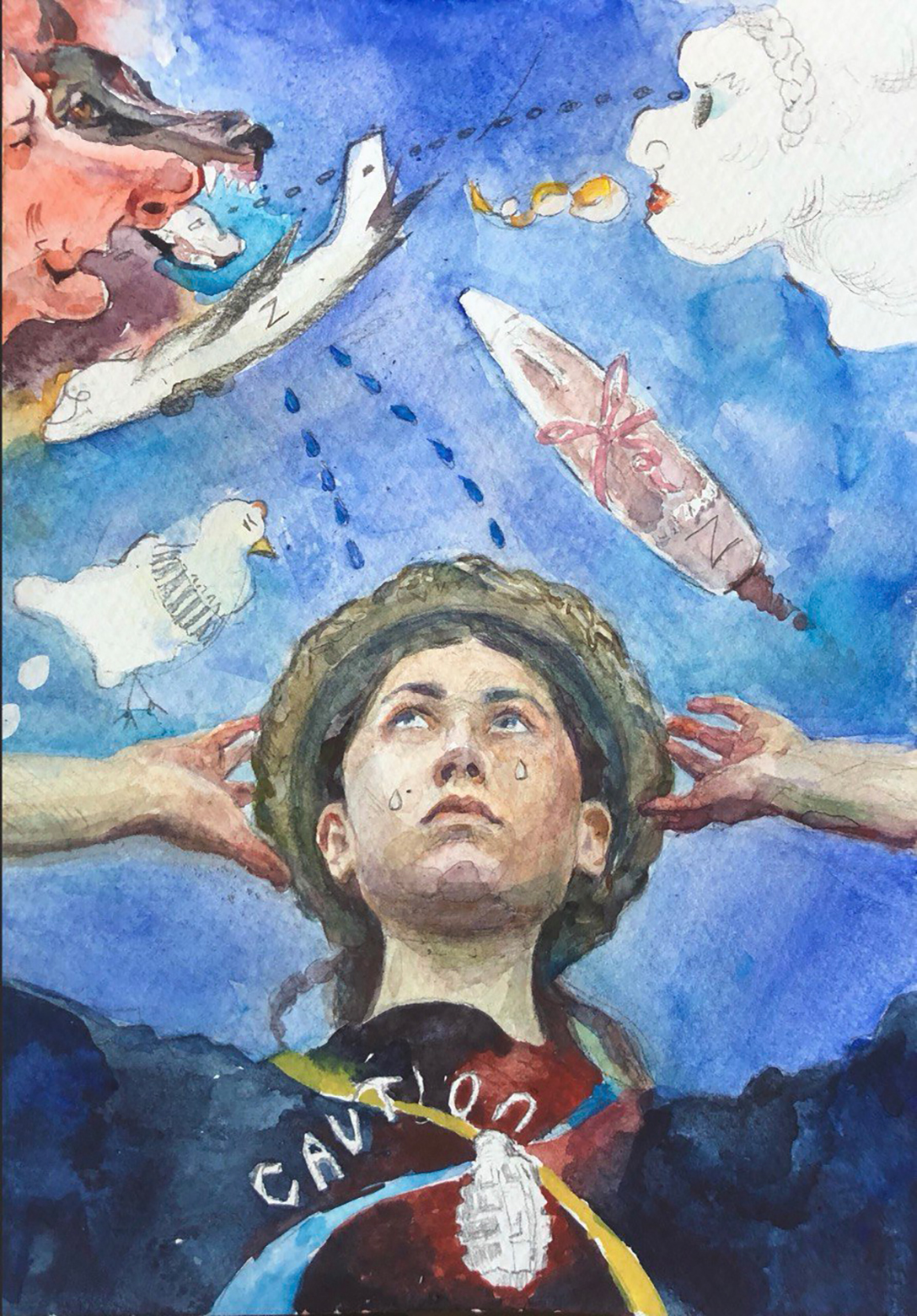 In one of the works she’s done in her flat in Estonia, a watercolor self-portrait called Thank you, Russia, you can see some of Galushchak’s anger reflected.

In the painting, she tries to hide from her enemies, who are shown in the top left corner. You see Russian President Vladimir Putin’s face. It’s distorted and resembles a pig. Behind him is Chechen leader Ramzan Kadyrov, portrayed as his dog. Galushchak’s tears become missiles aimed at a Russian plane marked with the now-familiar invasion symbol, “Z.”

While the subjects of many of Galushchak’s paintings are strangers whose faces communicate something to her in one way or another, there are also many portraits of dear friends, most of whom, like her, have been deeply impacted by the war. 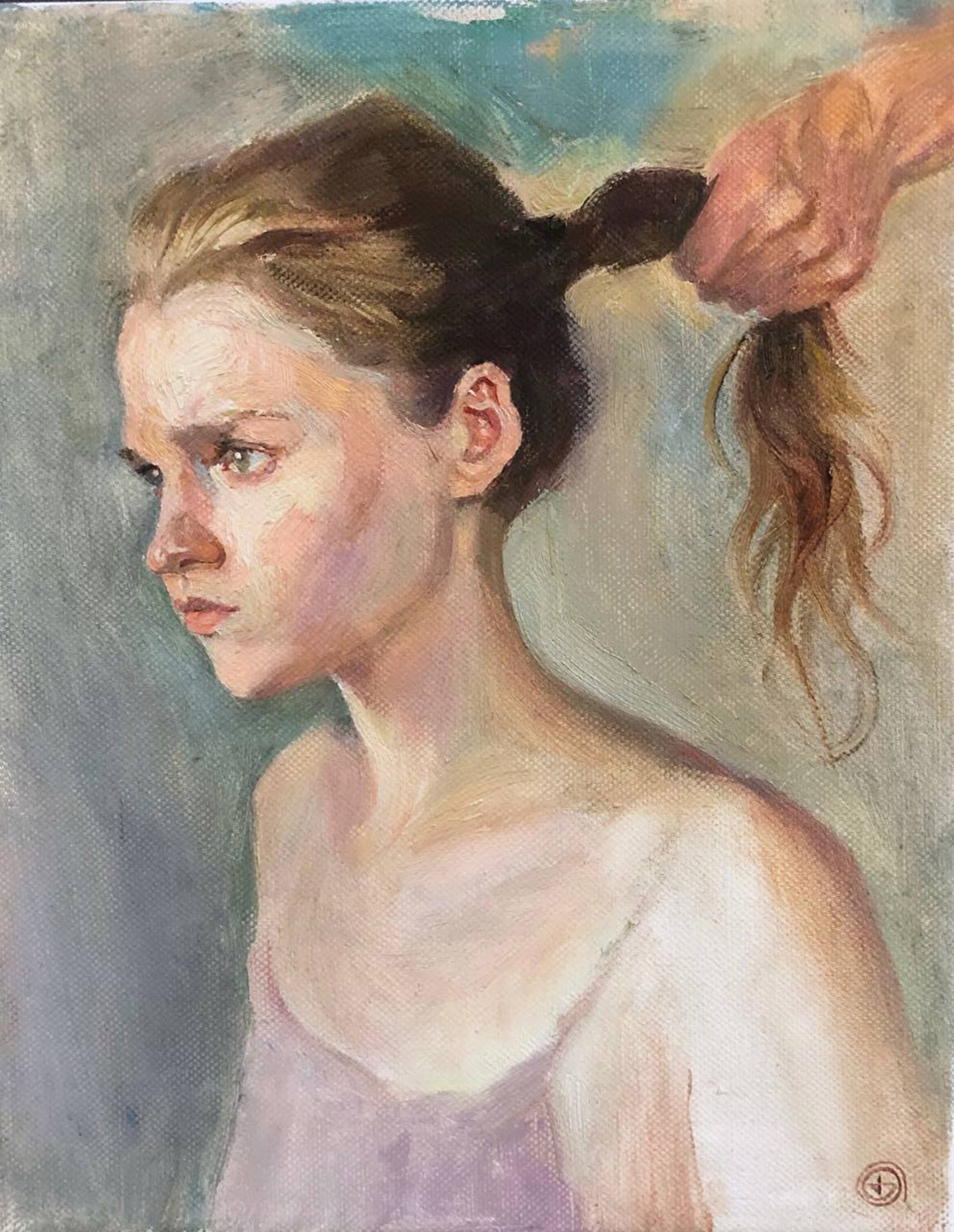 ‘Something calls back’ Photo credit: Courtesy of Anna Galushchak

One oil painting that’s particularly close to Galushchak’s heart, which she named Something calls back, shows one of her friends from Bucha, Anastasia, who agreed to model for Galushchak. In the image, a hand pulls the young woman’s ponytail.

“Something she had in her life makes her feel very stressed and she can’t go somewhere just straightaway without thinking,” said Galushchak. “She feels like she has to return to her family, for example, or to her land, or she just misses her boyfriend. In this painting, I wanted to show everything in one hand.”

Like the subject of her painting, Galushchak is called back to Ukraine.

“Of course we are planning to leave at the end of May. My grandmother is there. My father. My home. So I just don’t know if I would even want to stay here. How can I? I’m not needed here at all,” she said.

“Everywhere. In every other country,” she answered.

Her portraits show both hope in the power of love and despair under the present circumstances. 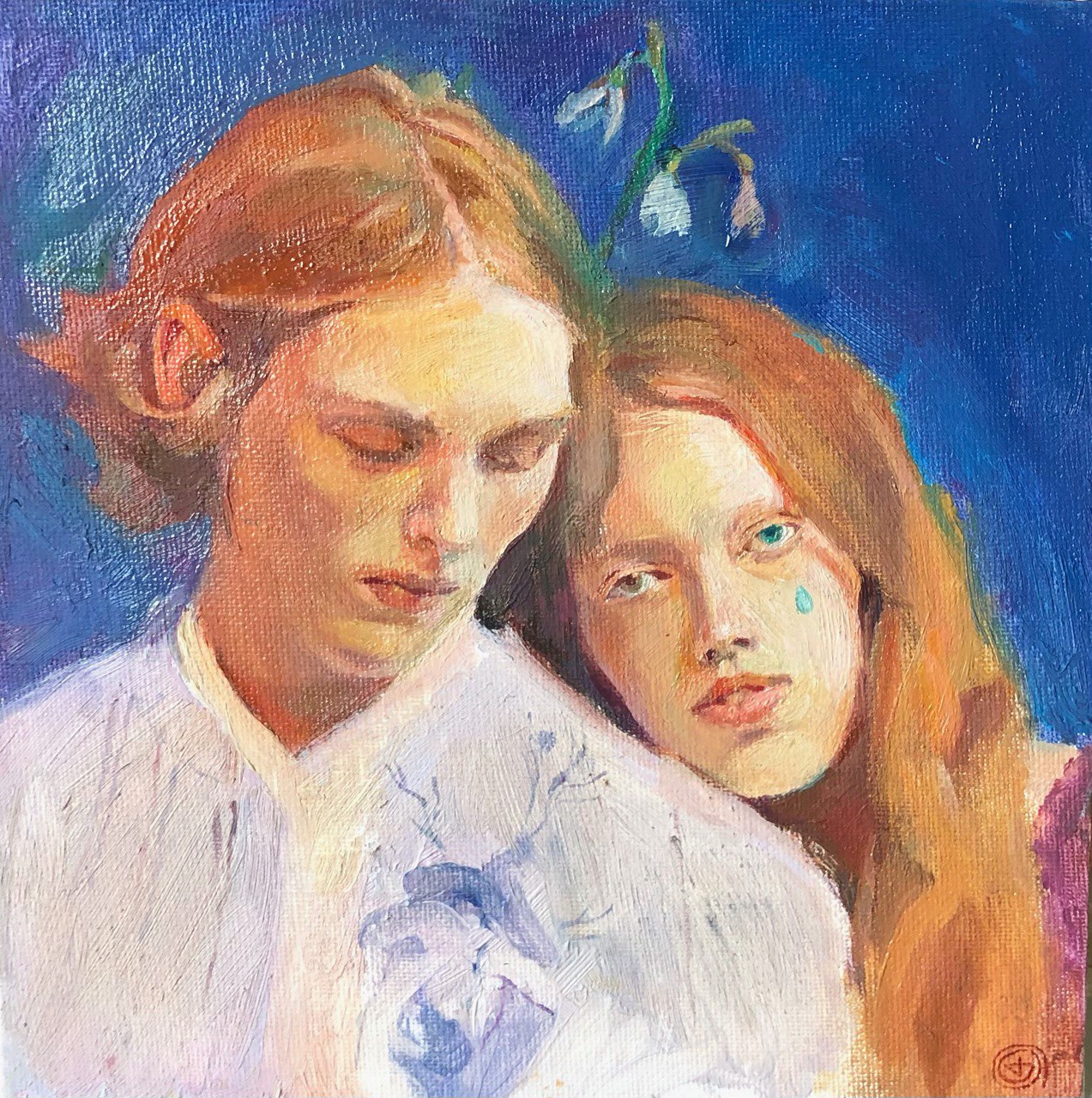 In an oil painting, Spring comes, love blooms, war continues, Galushchak depicts a young couple whose intertwining hair blossoms into a flower that Galushchak said is commonly seen in Ukrainian forests in the springtime. The young man’s heart seems to grow out of his chest as if it, too, were a plant.

“At any time, at any period of life, even if it’s war, love protects our life and our hearts. And it makes us stronger,” Galushchak said. 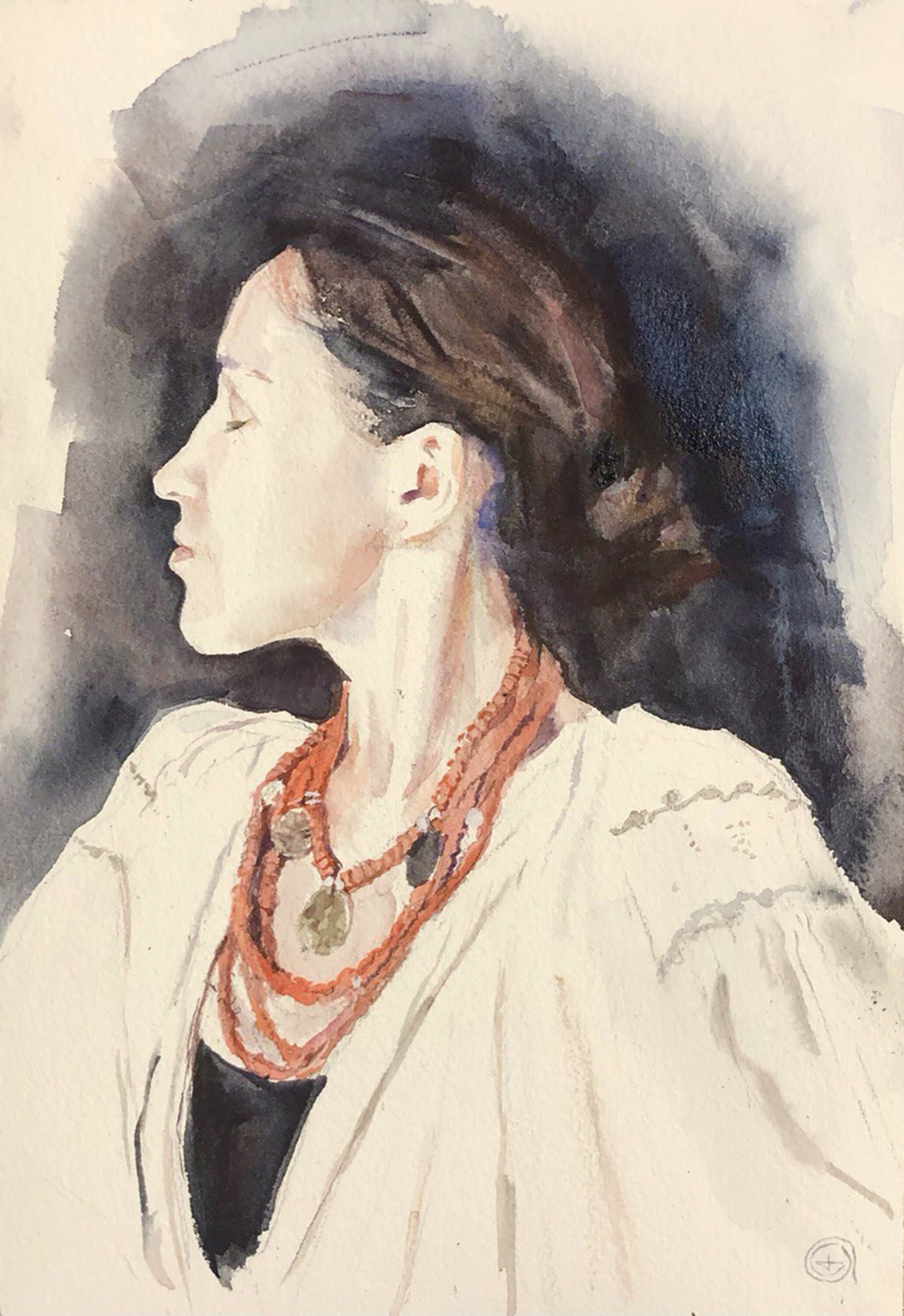 ‘Where the eyes are closed — peace emerges’ Photo credit: Courtesy of Anna Galushchak

While the loving couple is portrayed in front of a royal blue background, the woman in another portrait, called Where the eyes are closed — peace emerges, has a black background — seeming to be in total darkness.

“She just imagines that everything will be okay,” Galushchak said.

As the watercolor’s title describes, her eyes are closed. Galushchak said that with her eyes shut, the woman can envision how she’d like things to be rather than the reality of how they are. The portrait expresses the artist’s’s own concerns.

“I’m pessimistic. Absolutely. About everything. I’m trying not to think about that. I’m trying to work, and that’s all,” she said. “I don’t hope [for] anything because we have a very difficult situation in Ukraine. Prices have gone up three times and people can’t even buy more than 10 liters of fuel for their cars.” 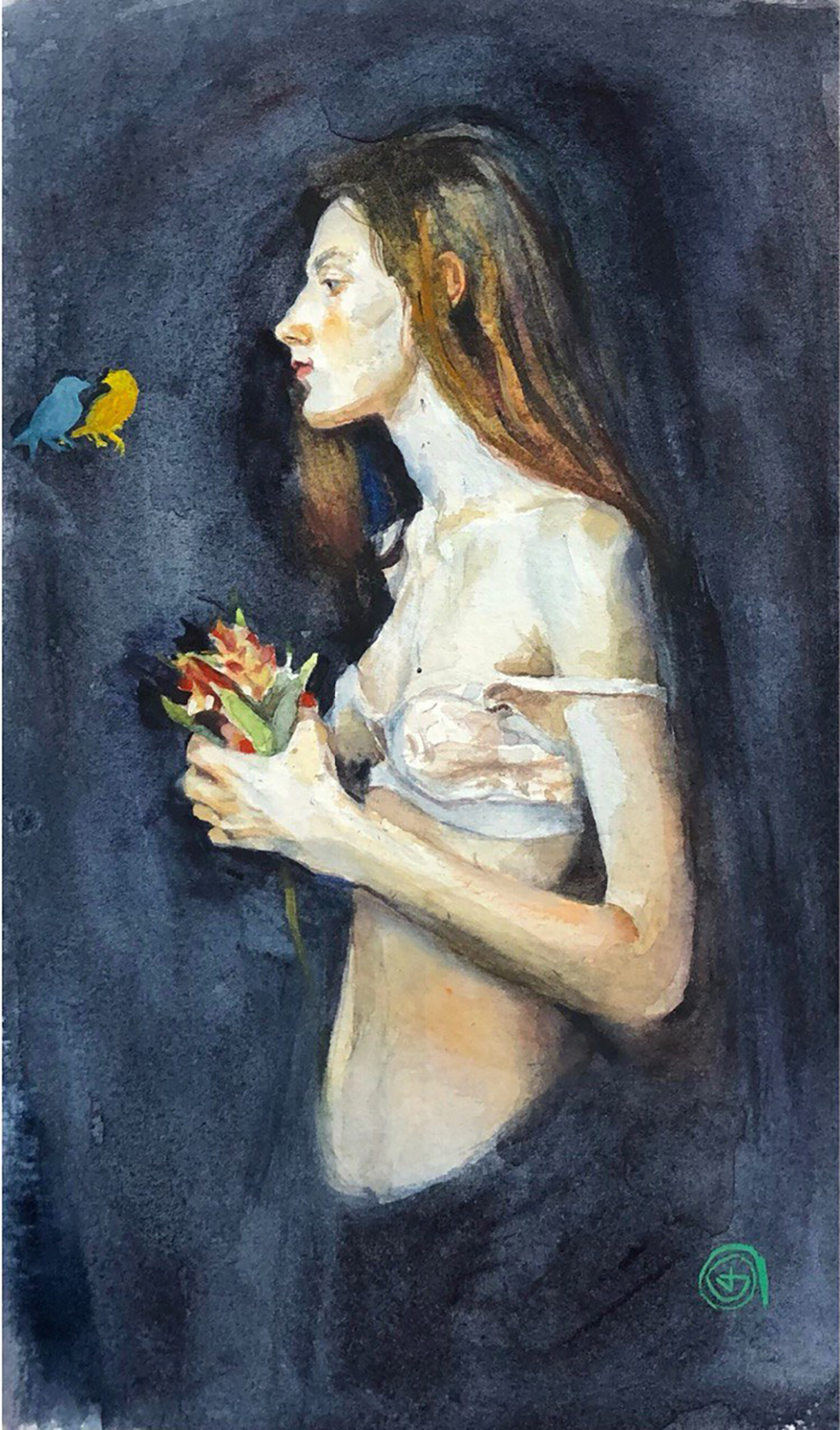 One piece is more optimistic. In Pray for Ukraine, a beautiful woman clutches flowers in the darkness. She is partially dressed, vulnerable. In the background you see blue and yellow birds — the colors of the Ukrainian flag.

“That girl, she’s calm. And she just believes in the future.”

Thanks to the kindness of neighbors, when Galushchak returns home to Bucha at the end of the month, her apartment won’t be a complete wreck.

“They cleaned up everything,” she said. “Everything. Like the sofa, and the bed, and all the trash, and they sorted out some of my works that are still safe. I don’t know to [what] extent they are safe, but anyway it is clean there.”

Although she sometimes describes herself as a misanthrope — like the gratitude in her voice when she talks about what her neighbors had done for her — Galushchak’s paintings tell a different story. 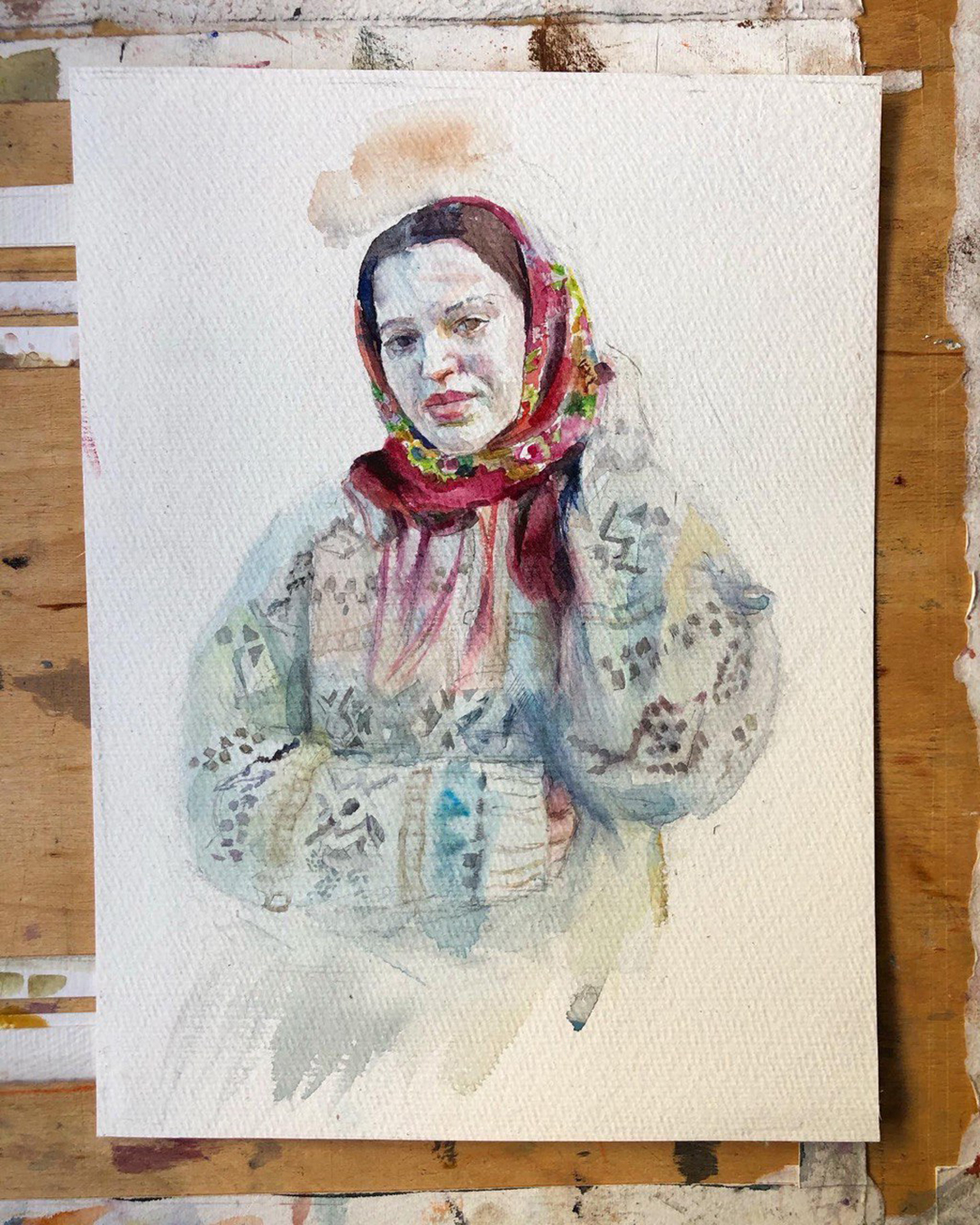 One painting that she’d completed before the war and brought with her to Estonia — she chose to rescue her art instead of much of her clothing — expresses this. It’s a watercolor of a friend, Bogdana Romanenko, wearing a traditional Ukrainian headdress covered in flowers. Galushchak conveys Romanenko’s soft and feminine nature. She looks at the viewer with a kind gaze.

“I am really happy that I took it with me, because if I would have left it in my flat it would be damaged,” Galushchak said. “We can name this painting Survivor.” 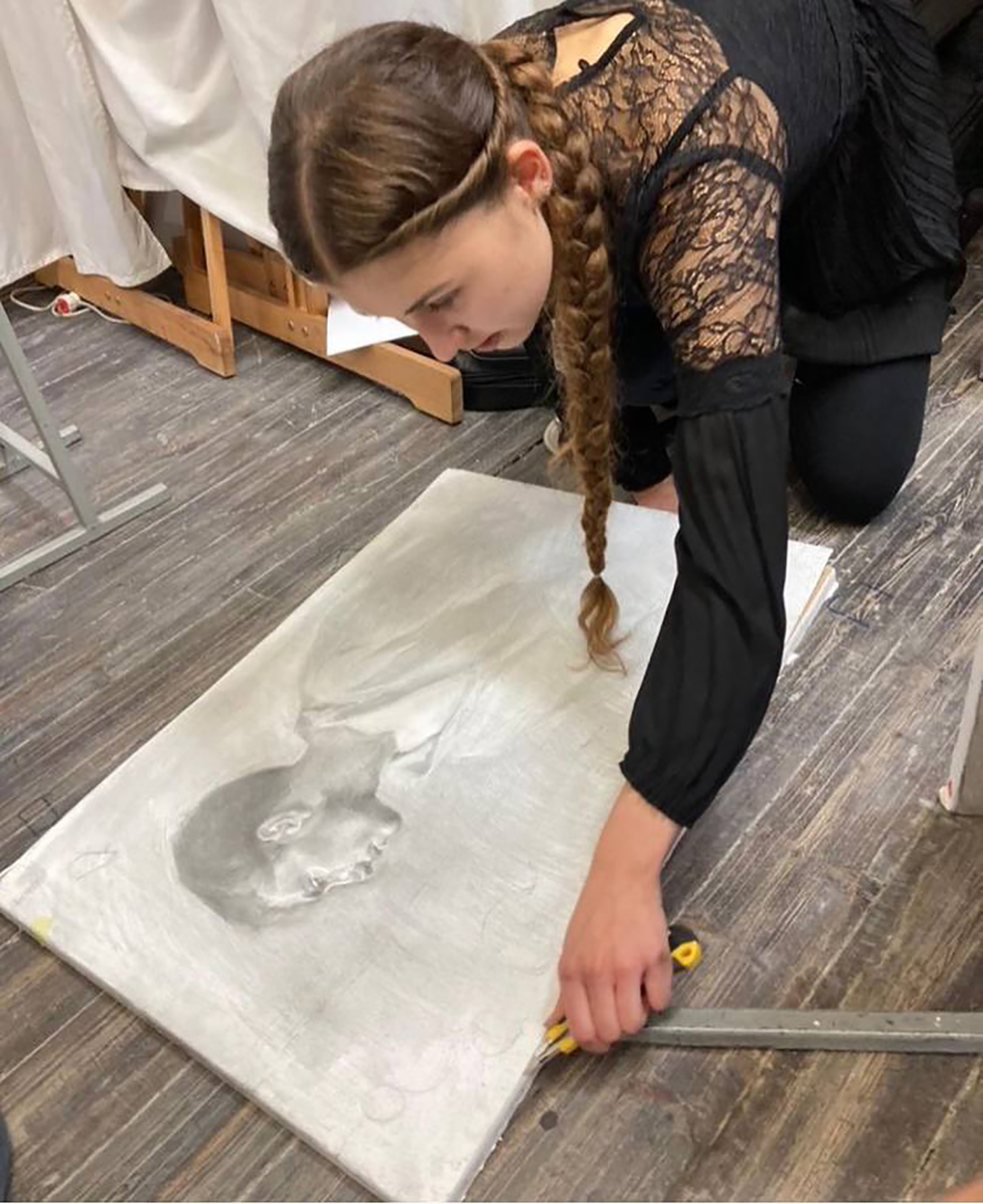 Galushchak working on one of her portraits. Photo credit: Courtesy of Anna Galushchak

You can see more of Galushchak’s paintings on Instagram and Etsy.