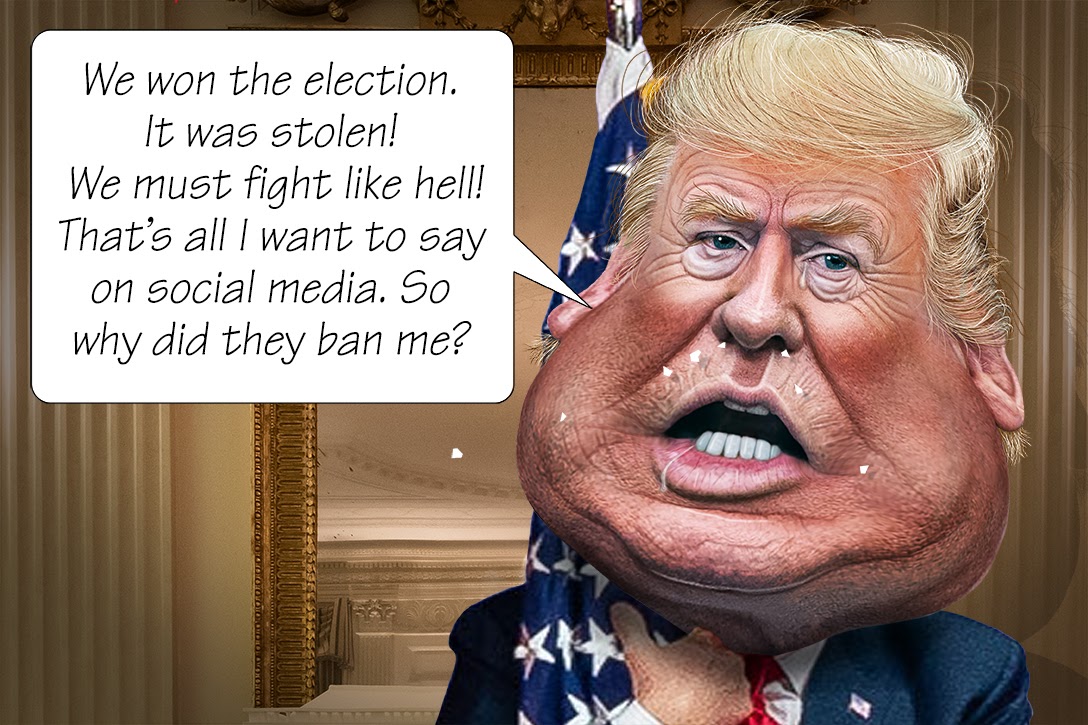 All I want to do is save America — Oh, and raise tons of money. Photo credit: DonkeyHotey / WhoWhatWhy (CC BY-SA 2.0) See complete attribution below.
Art Cartoon Journalism & Media

The historical record of Trump’s tweets has not been completely demolished, however. People can find them at Trump Twitter Archive, which started in 2016. This site captured all the president’s Tweets before 2016, and updated the site every 60 seconds from his presidential run to the day his account was banned, meaning any Trump tweet from any time can be found there.

While many die-hard Trump supporters tweeted they would see each other on the alt-right social networking app Parler, that, too, has been hamstrung. Google removed the app from its store, and Apple followed suit last night. With Amazon dropping Parler from its stores, the platform is currently curtailed and could be offline until it finds a new host.

In a statement issued on Friday, Parler founder and CEO John Matze said, “We will not cave to pressure from anti-competitive actors! We will and always have enforced our rules against violence and illegal activity. But we WONT cave to politically motivated companies and those authoritarians who hate free speech!”

Many members of the pro-Trump mob used Parler and right-wing forums on more mainstream platforms to plan the riot that ended with at least five people dead and dozens injured. Facing intense pressure, the mainstream social media companies have begun to take what many lawmakers view to be long overdue action on regulating extremist content. Reddit even shut down its popular subreddit r/DonaldTrump.

Twitter’s decision came two days after it placed the president’s account under a 12-hour lockdown for violating its policies on election misinformation after he repeatedly tweeted lies that the November election was stolen and fraudulent, and incited hundreds of insurrectionists to violently storm and occupy the US Capitol building on Wednesday. Twitter reinstated his page Thursday morning but then permanently suspended it a day later after he praised the rioters and announced he would not attend Biden’s inauguration.

“Due to the ongoing tensions in the United States, and an uptick in the global conversation in regards to the people who violently stormed the Capitol on January 6, 2021, these two Tweets must be read in the context of broader events in the country and the ways in which the President’s statements can be mobilized by different audiences, including to incite violence, as well as in the context of the pattern of behavior from this account in recent weeks,” Twitter’s statement said.

The platform stated that his final tweets “are likely to inspire others to replicate the violent acts that took place on January 6, 2021, and that there are multiple indicators that they are being received and understood as encouragement to do so,” mentioning alleged plans circulating on Twitter and elsewhere for a second attack on the Capitol on January 17.

His government accounts @POTUS and @WhiteHouse are still active, though with restrictions. Trump used them on Friday night to air his grievances about the suspension of his personal account, but Twitter quickly removed the four offending tweets for violating its misinformation policies, according to USA Today.

Facebook on Thursday blocked Trump’s page from posting “for at least the next two weeks until the peaceful transition of power is complete,” and there is speculation that it will consider a permanent ban. Snapchat and Twitch have revoked Trump’s access to his accounts. Twitter also suspended Trump’s campaign account, @TeamTrump, and the accounts of Michael Flynn, 8chan administrator Ron Watkins, and Trump’s election lawyers Lin Wood and Sidney Powell.

This is a striking development. Even as Facebook and Twitter shored up their content regulation guidelines on misinformation in recent months, they left Trump’s posts or sometimes slapped them with warning labels under public interest exemptions for world leaders and high-profile figures. But his incitement of violence crossed a line for Twitter, which noted in its statement that “these accounts are not above our rules entirely.”

Around Twitter, many people celebrated the decision as the end of the frequent diatribes that have defined Trump’s presidency and a success for activists who have campaigned for years for the suspension of his account.

Hey, y’all, just a reminder that @KamalaHarris called for Trump to be banned from Twitter back in 2019, because she thought his use of the platform posed a threat. Back then, many said it was absurd and she was “playing small ball”.

But some lawmakers and media figures criticized the move as too little, too late, when millions have already latched onto the lies and conspiracy theories about the presidential election that Trump has been peddling for months.

The outgoing president’s lawyer Rudy Giuliani, who called for “trial by combat” when addressing the crowd before they marched to the Capitol, fired off a series of tweets about the decision and continued to push conspiracy theories about the election.

What happened to Parler?

What happened to POTUS?

Who will be silenced next?