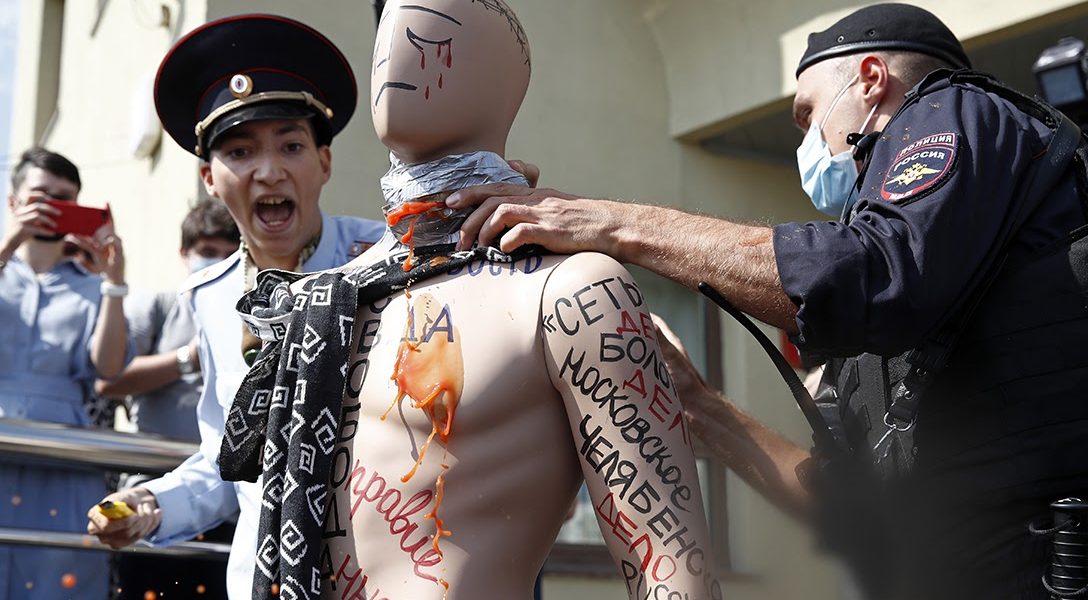 When Pavel Krisevich, dressed in nothing but a loin cloth and a crown of thorns, had his hands tied to a crucifix towering above burning paper files in front of one of the most ominous buildings in Russia, he wasn’t trying to impersonate Jesus.

The 20-year-old performance artist — who staged the event on Lubyanka Square in front of the headquarters of the FSB, Russia’s Federal Security Service, formerly known as the KGB — intended to deliver a message: Russia, under Putin, still imprisons thousands of political opponents who face a form of crucifixion.

“All political prisoners face a Golgotha, a crucifixion,” Krisevich told WhoWhatWhy. “There are thousands of them.” The burning papers in his November 5 performance, Krisevich explained, represent the volumes of indictments fabricated by FSB officers and other repressive law enforcement agencies.

The spectacle was only the latest in what has become a very Russian, post-Soviet tradition of provocative, politically incorrect, and occasionally illegal performance art that amalgamates politics and protest. Despite possible persecution, fines, or jail time, a handful of artists regularly invade Russia’s comfort zones and occasionally vandalize public property.

Their objective is to deconstruct, ridicule, and troll what they see as President Vladimir Putin’s tyrannical, patriarchal, and obscurantist policies. Lauded by art critics and lambasted by pro-Kremlin media, most come from St. Petersburg, Putin’s hometown and Russia’s one-time imperial capital. The frigid Baltic city is the setting of Crime and Punishment, Fyodor Dostoevsky’s 1866 novel whose protagonist claimed the moral high ground and therefore “has a right” to kill and rob an elderly pawnbroker.

In Krisevich’s case, the lanky university student had already cut his teeth in performance art earlier this year when he slit the throat of a mannequin in a police uniform near the court building where a group of young people were caught up in a trial that was widely seen as orchestrated by security officials.

During another court session, Krisevich “hanged” himself from a bridge. After the August 20 poisoning of opposition leader Alexey Navalny with a nerve agent that was presumably dissolved in his tea, Krisevich brought a symbolic cup of tea to another FSB building.

Today’s artistic mavericks are ready to foray beyond what’s ethical, conventional, and legal. They have targeted a very specific audience.

In the 20th century, artistic iconoclasts such as Russian avant-gardist Kazimir Malevich — famous for such abstract paintings as Black Square and White on White — and US composer John Cage — who created a piano piece consisting of precisely four minutes and 33 seconds of complete silence — set out to symbolically annihilate the artistic canon that preceded them. Today’s Russian performance artists want nothing less than to annihilate political power.

“Malevich and John Cage are anti-art,” Yanyshev says. “But our performance artists are anti-power, the distortion of power.”

The best-known example is Pussy Riot, a feminist punk outfit that “prayed” to the Virgin Mary, then danced and high-kicked in Moscow’s Cathedral of Christ the Saviour in 2012 to “drive Putin away.”

Pussy Riot is an off-spring of Voina (War), a loose collective of leftist radicals from St. Petersburg. The group made a splash when it released 3,000 giant cockroaches in a court building where fellow artists had been put on trial. It followed up by setting fire to a police car in order “to wish political prisoners a Happy New Year.” It then drew a luminescent, 65-meter-long penis on a drawbridge next to an FSB building.

In 2016, another St. Petersburg artist, Pyotr Pavlensky, doused the wooden doors of the Moscow FSB headquarters with gasoline and set them on fire. Pavlensky then waited patiently for the police to arrest him. He later told the court that his performance was directed against the Kremlin’s policies of “incessant terror.”

Three years earlier, Pavlensky had taken off his clothes and nailed his scrotum to the pavement of Moscow’s Red Square. He described the act as a metaphor for political apathy. It was only a stone’s throw from the ten-domed Cathedral of St. Basil, which stands like a candy castle next to the Kremlin’s vermillion walls, the mausoleum of Soviet founder Vladimir Lenin, and a cluster of graves of Soviet leaders, including Josef Stalin.

There was some irony in the location of Pavlensky’s performance, since St. Basil was also a political performance artist of sorts.

Presenting himself as an eccentric “holy fool,” Basil walked around 16th-century Moscow stark naked, braving the elements and making prophecies. He was the only person in Russia who dared criticize the czar, Ivan the Terrible. Although Ivan feared Basil when he was alive, he allowed him to be buried in the cathedral that now bears his name.

In Putin’s Russia, performance artists are not so lucky.

After his performance, Krisevich was expelled from a prestigious university and sentenced to 15 days in prison. In addition to the jail time, two unidentified men doused Krisevich with a green chemical and told him that he must “kneel and beg for forgiveness” — a traditional Kremlin tactic of using young activists or petty criminals to intimidate critics.

Two Pussy Riot members were sentenced to two years in jail in 2012. Six years later, their manager Pyotr Verzilov barely survived an attempt to poison him. German experts concluded that Verzilov had been exposed to the same nerve agent that was later used on Navalny. Some of the dissidents have admittedly engaged in behavior that would be as unacceptable in the West as it is in Russia. Voina’s founder, Oleg Vorotnikov, whose nickname is “Vor” (“Thief”), fled Russia with his wife and three children. The family was kicked out of several artist residencies, apartments, and squats in a number of different European countries after they continually engaged in shoplifting and an “anti-social” lifestyle. In May, German police arrested Vorotnikov and charged him with creating a militant anti-fascist group and engaging in arms trafficking.

After Pavlensky tried to set fire to the FSB, he was fined $8,000 for “vandalism” and forcibly committed for an evaluation in the Serbsky psychiatric hospital in Moscow, where Soviet-era dissidents were often kept drugged in a vegetative state for years. Pavlensky fled to France with his family in 2017.

Not all of it was fun and games. Actress Anastasia Slonina of the outspoken Teatr.doc theater told police that Pavlensky and his partner, Oksana Shalygina, lured her to their apartment in December 2016, where Pavlensky allegedly tried to rape her and cut her arms and clothes with a knife.

“There are no borders in art. And no ethics. Of course, it’s about breaking standards and stereotypes. It’s about overcoming the fear everyone has.” — Oksana Shalygina

Her colleagues are still angry.

“Violence for the sake of art is profiteering and it discredits art,” director and actress Anastasia Patlay told WhyWhatWhy. “You can nail your balls to the pavement, but you can’t rape.”

Both Pavlensky and Shalygina have denied the allegations.

However, Shalygina, the mother of Pavlensky’s two daughters, accused Pavlensky of raping and beating her and forcing her to cut off her finger. She accused Pavlensky of wanting her to abandon her artistic work in order to concentrate on his, and of trying to force her to part with her five-year-old son from another man.

Despite that, she still defends his creative methods. “There are no borders in art. And no ethics,” she told WhoWhatWhy. “Of course, it’s about breaking standards and stereotypes. It’s about overcoming the fear everyone has.”

More than a century after Paris was scandalized by Russian abstract art and the premiere of the Rite of Spring, Igor Stravinsky’s ballet about human sacrifice, Pavlensky shocked the French capital by reenacting his most famous stunt.

On October 16, 2017, Pavlensky set fire to the doors of the Paris offices of the Bank of France in order to “to revive the revolutionary spirit in France.” Two years later, he received a suspended three-year sentence.

In February, Pavlensky leaked a sex video that Paris mayoral candidate Benjamin Griveaux had allegedly sent to Pavlensky’s latest girlfriend. The unlucky candidate had French President Emmanuel Macron’s support, but he withdrew from the race after Pavlensky released the video, allegedly to protest “the hypocrisy that became the norm in France.”

Some observers have charged that Pavlensky’s ends-justify-the-means approach makes him look like Putin’s bohemian doppelganger.

“Pavlensky is the flesh and blood of Putin’s Russia,” Russian analyst Konstantin Eggert wrote in a 2019 op-ed for German broadcaster Deutsche Welle.

“Both think that the strong have the right to make their own rules and change them as they please.”