Woody Allen framing a scene on the set of "To Rome With Love" in 2011. Photo credit: Armando Brecciaroli / Flickr (CC BY-NC-ND 2.0)
Art Culture

Woody Allen has just announced he’s heading back to Paris to shoot his 50th film. Eschewing skeptical producers and fickle viewers in the US, he’s working in the country that seems to forgive even the most incendiary artists, such as the miscreant Roman Polanski, who still lives and works there (as a French citizen he can’t be extradited to the US) and the writer and professional heckler Michel Houellebecq, who is considered a national hero.

I’ve always been a big Woody Allen fan. I’ve seen a good bulk of his movies, listened to the records, read the satire collections, and memorized the jokes (“Don’t worry, I can walk to the curb from here”). I’ve been defending him for years against the charge that he “married his own daughter” (Soon-Yi was the adopted daughter of his then-partner, I’d patiently explain to people). It’s true I haven’t much liked his films since Midnight in Paris, and even that was the only good one since Bullets Over Broadway. But I’ve been a devoted fan.

But then I made the mistake of watching Woody Allen vs. Mia Farrow, the HBO documentary that makes a convincing case Woody sexually assaulted Dylan, his adopted seven-year-old daughter, and then sued to take three of Mia’s children away from her (including Dylan). He lost that custody battle, but he won in the court of public opinion, successfully painting Mia as an unhinged “woman scorned,” as well as having the criminal case against him dropped (allegedly because the Connecticut prosecutor didn’t want to force onto Dylan, still a young child, the pain of testifying in court).

For those of us who’ve liked a lot of Woody’s movies, who grew up on Annie Hall and Sleeper, this is all dispiriting stuff. But does that mean we can’t watch his movies anymore? People have argued that we shouldn’t be contributing to his coffers, so no more ticket-buying of his new films. That’s no problem for me, I don’t like his recent work, which I’ve occasionally seen on streaming platforms or planes; he caught the zeitgeist in the ’70s (to use a particularly ’70s word), but now at 86 he’s too old to write young characters and seems divorced from the culture.

Still, I already have a boxed set of 20 of his best films on DVD; do I have to give that up? (Granted, one of those films is the problematic Manhattan, in which Woody’s character has a 17-year-old girlfriend, but I’d probably leave that one in its slipcase.) I didn’t abuse my child, I didn’t marry my ex-partner’s daughter, I didn’t sue my ex-girlfriend — why should I suffer? It’s really Woody Allen who shouldn’t be allowed to watch his own movies, or make any new ones for that matter. 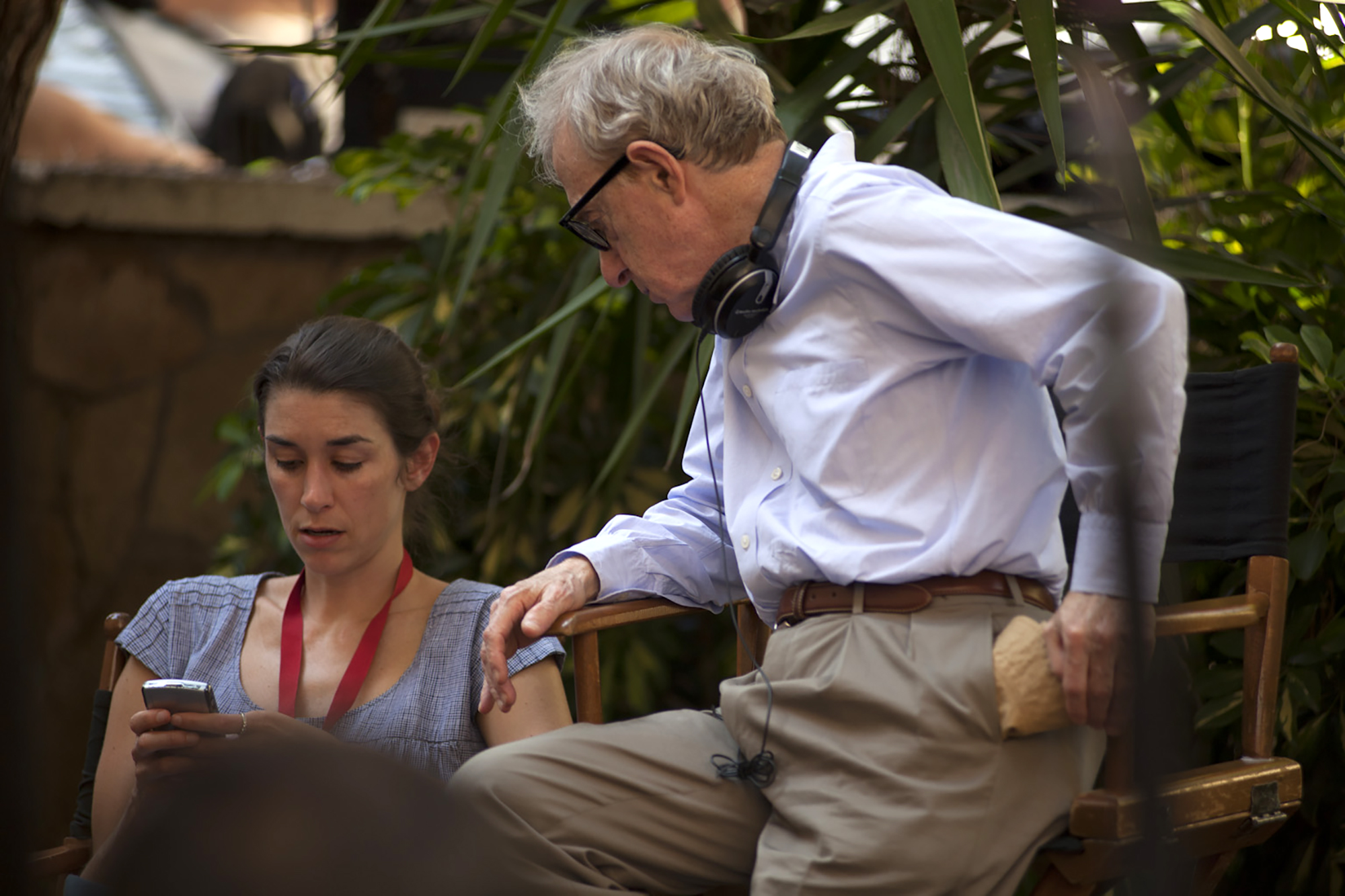 Woody Allen working with a staff member on the set of “To Rome With Love” in 2011. Photo credit: Armando Brecciaroli / Flickr (CC BY-NC-ND 2.0)

I’ve heard a lot of people say they just can’t stomach his films anymore. It’s not a matter of principle, it’s that his nebbishy, coughing-in-the-fist, pushing-his-glasses-back-on-his-nose just rankles now; it seems false. Manipulative. Poisonous. He’s not the loveable dweeb anymore.

I get that. But I’ve been studying the dates of his movies, wondering if it’s acceptable to watch Stardust Memories (1980), because it was made before he met Mia Farrow and allegedly abused his daughter. And what about Annie Hall? That was 1977 when he was still the loveable nerd who introduced Diane Keaton to Kierkegaard (and to the actual Marshall McLuhan in a line waiting to get into the movie). There’s Sleeper (1973), when he isn’t dating anyone 30 years his junior, he’s just slipping on an enormous banana peel. It’s funny.

I’ve always been able to separate the art from the artist; a lot of these creative types are unpleasant people, and once we begin denying ourselves their work, we’re the poorer for it, not they.

But Woody Allen is a brand, a face, a collection of mannerisms, a corduroy jacket, a pair of glasses, a clarinet. He sold this brand to us on the installment plan, and it’s up to us whether we want to renew it or not.

I was about to put on Bananas (1971), one of his benign, early, funny films, when I felt something that surprised me: I just didn’t want to watch it. It had nothing to do with trying to punish Allen. He’d just lost his appeal.

If ground glass is ever found in your favorite brand of chocolate bar, it’s going to ruin your experience of eating it going forward. Even if it wasn’t found in your own bar, the trepidation of consuming a compromised food item will give you a bad sense-memory. So it is with art or entertainment, and I guess the Woody Allen brand is now compromised for me. I can’t enjoy Woody’s films anymore. They all contain ground glass.

J.B. Miller is an American writer living in London