Art, Identity, and Invisibility in Texas

The title of Ralph Ellison’s 1952 novel, The Invisible Man, referred to the refusal of many white Americans to acknowledge the Black Americans among us. Deborah Roberts’s current exhibition, “I’m,” at the Jones Contemporary Arts Center in Austin, TX, takes Ellison’s insight substantially further.

It’s not just a question of white Americans not seeing African Americans, Roberts contends; it is also a question of white America failing to understand just what Black America is trying to communicate. The inability to understand can have fatal results, as evidenced by the growing number of incidents in which frightened white police officers shoot at imagined threats only to learn that they were never in any real danger.

The Roberts exhibition takes place just as Austin itself is going through rapid change. A sudden influx of multibillion dollar corporations has made Austin one of the fastest growing cities in America and sent real estate prices soaring. Overheard conversations tend to be about the latest software. 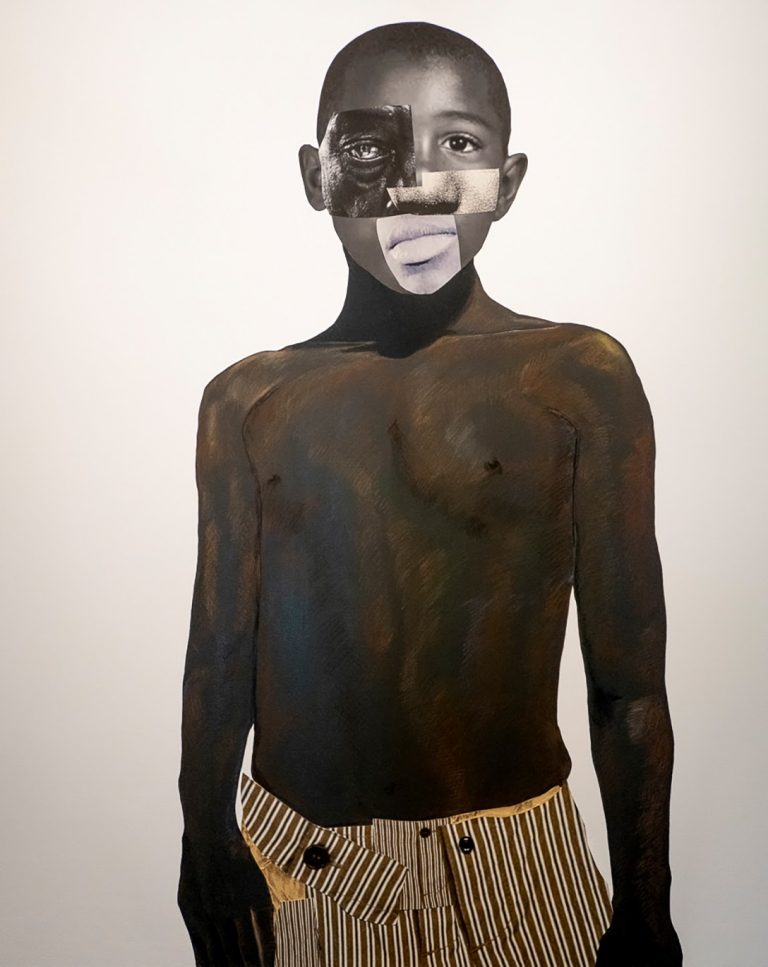 Deborah Roberts, ‘This is who I am.’ Photo credit: William Dowell / WhoWhatWhy

The Roberts exhibition is nevertheless particularly relevant at a time when much of the rest of the country is debating Black Lives Matter and the difficulties in cross-cultural communication.  Roberts’s work suggests that the treacherous path to lethal misunderstanding often begins in childhood. In her collage, This is who I am, Roberts fixes fragments of old and young faces into an image of a young boy. The portrait symbolizes the more than two centuries in which Black bodies have been enslaved, abused, and forced to contend with the whims of white America.

In another large portrait, Cocka-doodle-do, a boy’s face is collaged with Bahamian American actor Sidney Poitier and an anonymous child. The effect is to fuse the child with the grown man he will later become. Roberts’s intention was to create a portrait composed of layered collective identities. 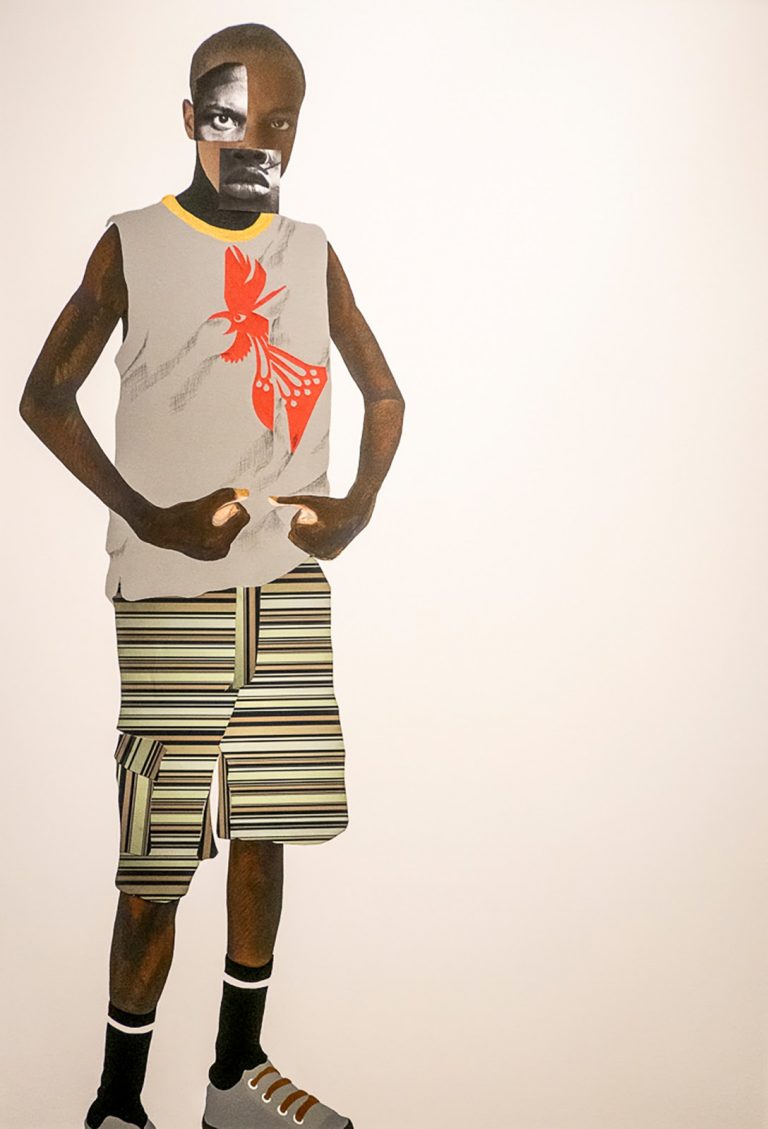 The aggressive, macho stance shows the boy’s attempts to “pump himself up” facing an external challenge.

The inspiration for this picture was the murder of Tamir Rice, a 12-year old boy shot and killed by a 26-year-old white police officer who opened fire within seconds of arriving on a street scene in Cleveland, OH.

The police officer, Timothy Loehmann, claimed that the boy had threatened him with a plastic toy gun. In fact, the child, confronted by the much larger and more intimidating white man, may have simply been trying to appear equally imposing in a misunderstood gesture of self-defense. The red rooster on the boy’s shirt symbolizes the dangers to the Black community of “toxic masculinity.” The tragic killing was yet another example of the dangers that lie in cultural misunderstanding. 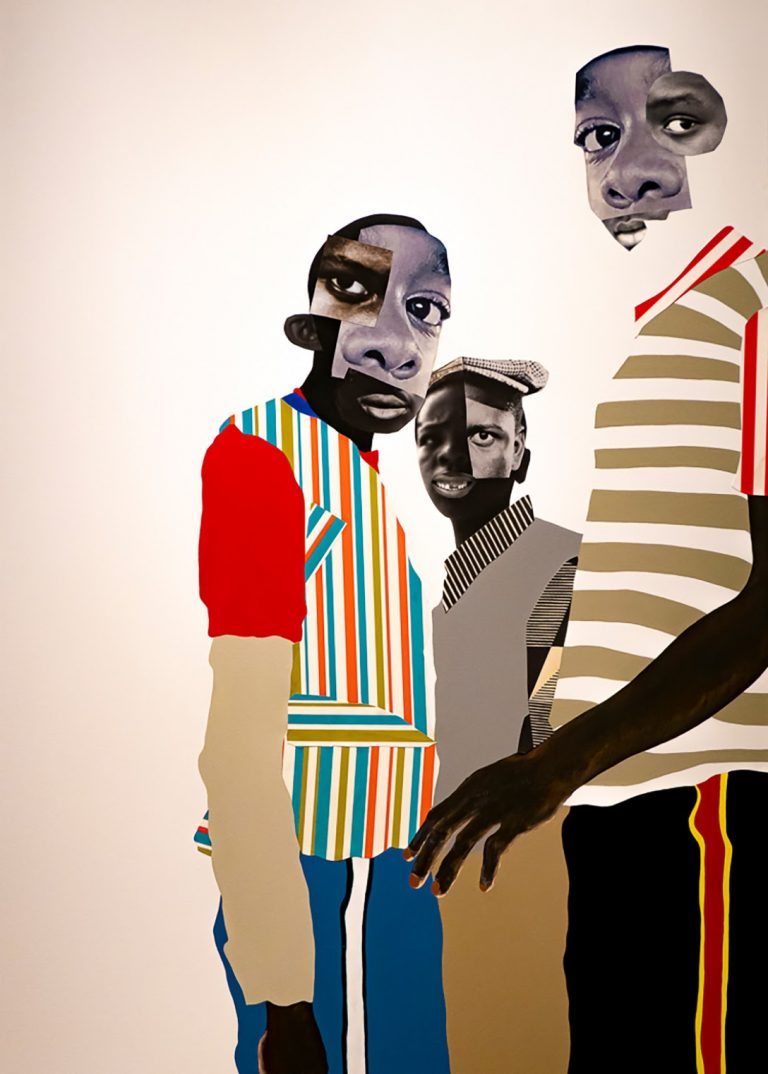 The evil committed by the few makes cultural incomprehension inevitable. That fact is emphasized in Roberts’s portraits Kings get their heads cut off (above) and The duty of disobedience (at the top of this article). In the second image, one girl wears a tank top with three running monkeys. Each monkey holds a red balloon. For white Americans the monkeys are cute drawings whose only intention is to appeal to small children. If you are Black, however, the images could easily refer to racial stereotypes frequently hurled at African Americans. The words “POP! GOES THE WEASEL” on another shirt might be a reference to action comics and “pop culture,” but it could just as easily be an allusion to the sounds of gunfire.

In the collage titled The unseen, Roberts contemplates the plight of young African American girls who not only have to contend with potential rejection by white Americans but must also hold their own in Black society. When they look back (No. 2)  shows a Black girl against a black background. Gold nail polish, the shape of clothing, and finally the girl’s posture emerge slowly from the darkness. Roberts is communicating the absence of Black girls from our national dialogue. These girls risk disappearing into the background. Roberts’s portrait restores their visibility. 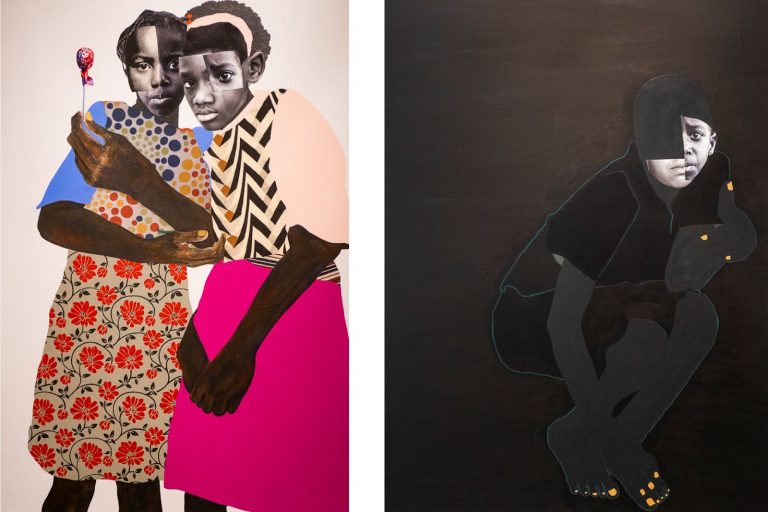 Two works by Deborah Roberts: ‘The unseen’ (left) and ‘When they look back (No. 2)’. Photo credit: William Dowell / WhoWhatWhy

Despite the fact that Roberts, 59, was born and raised in Austin, the show which opened last January at the Contemporary Austin at the Jones Center marks the first time she has been recognized with a solo exhibition in her hometown.

While the Deborah Roberts exhibition, which runs until August 15, is reason enough for visiting Austin, the Mexic-Arte Museum, just across the street from the Jones Center, offers an equally worthy exhibition composed of startlingly imaginative work by Mexican American artists, selected from 1,500 major paintings, etchings, and drawings collected by Juan Antonio Sandoval Jr., a former librarian at the University of Texas at El Paso.

Sandoval, who died in January 2021, left his entire collection, valued at tens of millions of dollars, to Mexic-Arte. His achievement as a collector was similar to that of French art dealers Paul Durand-Ruel and Ambroise Vollard, who promoted French Impressionism despite frequently vicious resistance from conservative critics in the late 1800s. Thanks to Durand-Ruel and Vollard, a succession of then-ignored artists, ranging from Renoir to Matisse and Picasso, were saved from debilitating poverty. In the same vein, Sandoval bought many of the works now on show in Austin mainly to keep the artists who created them from starving. 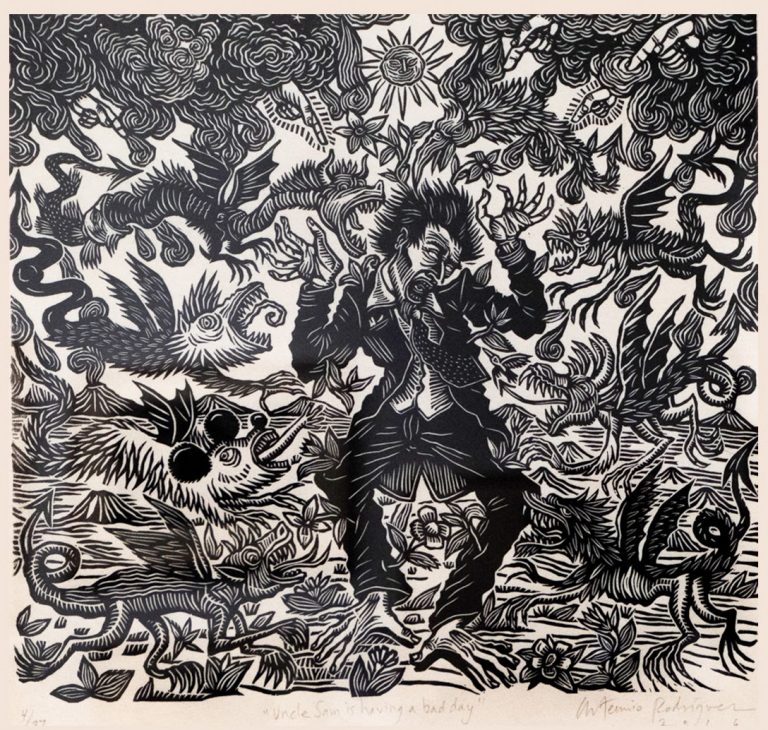 Much of the work is fiercely political. Artemio Rodriguez’s woodblock print Uncle Sam is having a bad day reveals a figure who looks as if he has been jolted by lightning and is beset by demons, monsters, and dragons.

Luis Jiménez’s Abu Ghraib focuses on the victims of policy gone mad. Francisco Delgado’s Misunderstood, Incomprendido illustrates a face-off between a contemplative dog and a vicious snake. Images of other howling dogs emerge from the background. Delgado’s Stay Alert reveals an upright crocodile in a business suit clutching a snake. Jiménez’s colorful image Howl depicts both the audible call for a wolf pack to gather and a cry against the darkness.

Some of the work is more personal. Llones’s Portrait of the artist with a fork is just that. Andrez’s Talking to myself shows a young man’s apparently startled face, a butterfly at his throat. Oscar de las Flores’s intricate engraving Origins of mezcal is a virtuosic tour de force of intimidating complexity. Victor “Mask” Casas’s Danny captures the full spectrum of Latin imagination. 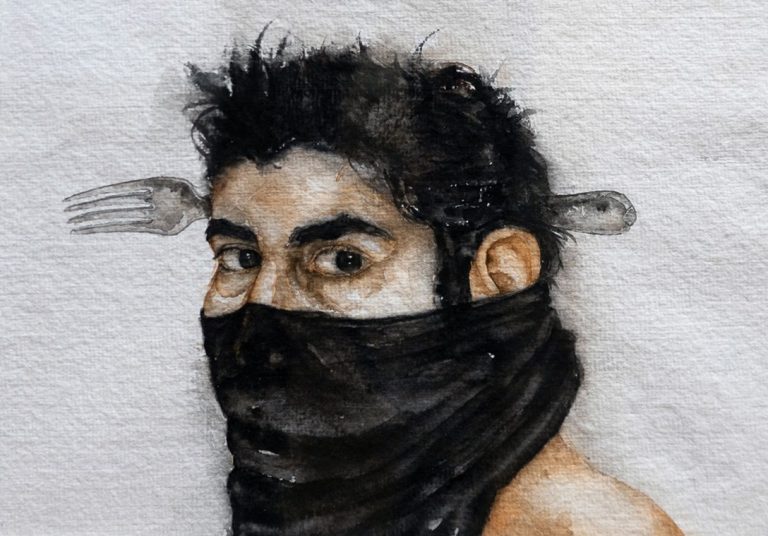 Llones, Portrait of the artist with a fork. Photo credit: William Dowell / WhoWhatWhy

The energy displayed at Mexic-Arte is frequently overwhelming. Interestingly, no one I talked to at the Deborah Roberts exhibition at the Jones Center had bothered to cross the street to see it or was even aware that it existed. African Americans are not the only ones subject to the “invisibility” described by Ralph Ellison. Despite its numerous efforts at modernization, Austin is still, at least partly, blinded by its whiteness. The real problem, as the Deborah Roberts show and Mexic-Arte illustrate, is not just skin color; it is culture.

Both the Roberts exhibition and the Mexic-Arte deal with cultures that are not only open to misunderstanding but also face difficulties in expressing what it is that they really want to say. While the roots in America of both African Americans and Mexican Americans extend back to before the founding of this country, both cultures were overshadowed by the massive influx of white Europeans that swept across the North American continent in the 1800s.

Mexic-Arte describes much of the art which it displays as belonging to an “in between” culture — not completely Mexican and certainly not Anglo-European white, but rather a mixture in which influences from both cultures are blended into a hybrid that is specifically native to this part of America.

Looking at Austin today, the radical change is coming not from Mexico, but from megacorporations like Tesla, Samsung, and Google that are anxious to escape the high cost of California. They favor Austin, not only because it offers an easygoing lifestyle but mainly because it is less expensive than Silicon Valley or the San Francisco Bay area. The downside to soaring real estate prices has been a sudden surge in homelessness as some residents are priced out of the market. 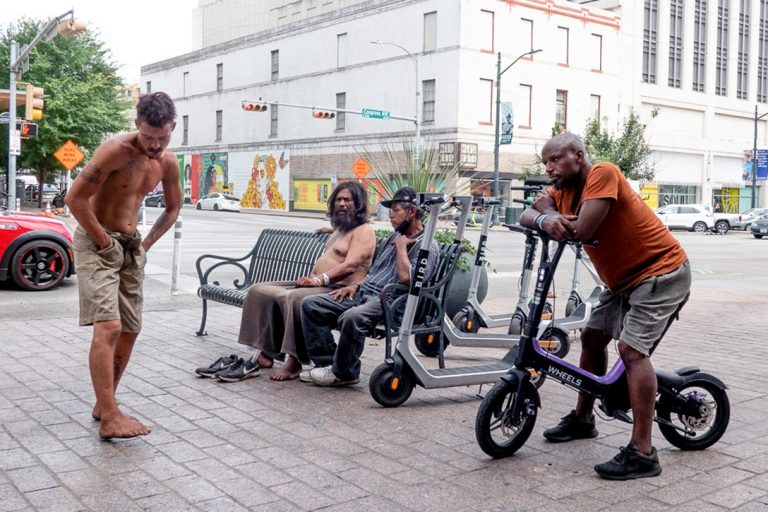 The city, which prides itself on having a surprisingly liberal attitude for Texas, hasn’t quite figured out how to handle the growing tent camps and groups of unemployed homeless people clustered around its otherwise sparkling new skyscrapers. As a staff member at the Jones Center remarked, “I hate to say it, but we have learned how not to see them.”

More than half the homeless people are white — most seem to be men between 30 and 40 years old. They are generally polite and not aggressive. They have simply been displaced and are consequently no longer relevant to anyone except themselves. In a sense they are the latest threatened minority and the latest addition to invisibility. They are the latest losers in a society facing rapid change.

The homeless are just one aspect of Austin’s high-tech gold rush. The overwhelming majority of the population appears to be young, dynamic, and more interested in listening to the latest music, drinking margaritas, and interfacing with their iPhones. The city boasts that it is the live music capital of the world. Youth seem to have effortlessly dominated the city’s future as they race from one end of town to the other on electric scooters activated by apps on their smartphones.

The city appears to have left the past behind. Of course, nothing is gained by staying stuck in the past, but to avoid repeating past mistakes it is best to understand both where we came from and where we are now headed.

The Roberts exhibition at the Jones and the retrospective at Mexic-Arte provide some striking visual clues. Austin is not now and never was one culture; it has always been subject to diverse influences. 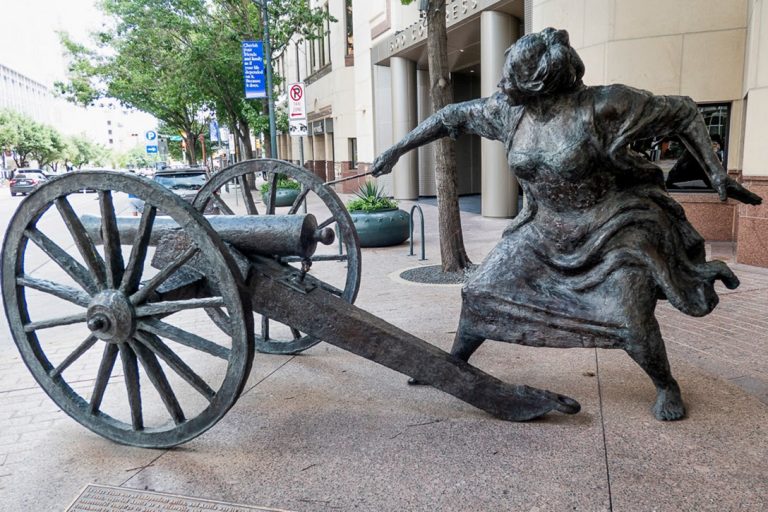 Perhaps a final clue comes from a statue on the sidewalk at Congress Avenue and 6th Street. It portrays a nightgown-clad Texan woman lighting a cannon. The sculpture is in honor of tavern keeper Angelina Eberly. In 1842, after Texas had declared itself an independent republic with Austin its capital but had not yet joined the United States, Sam Houston, who had just been elected president, decided that Austin was too vulnerable to attack to be named the state capital. The residents of Austin did not agree. Houston finally sent a military detachment to remove government documents. Eberly, seeing the men loading documents into a wagon, ran to the town’s only cannon and fired it full blast at the government land office. Houston’s men fled, never to return.

Sam Houston may have had logic and reason on his side, but Austin’s population didn’t really care. It stuck to its guns, and the capital stayed where it was. The powerful work in the Deborah Roberts exhibition and at Mexic-Arte can help us understand how we got to where we are. The future is still open.