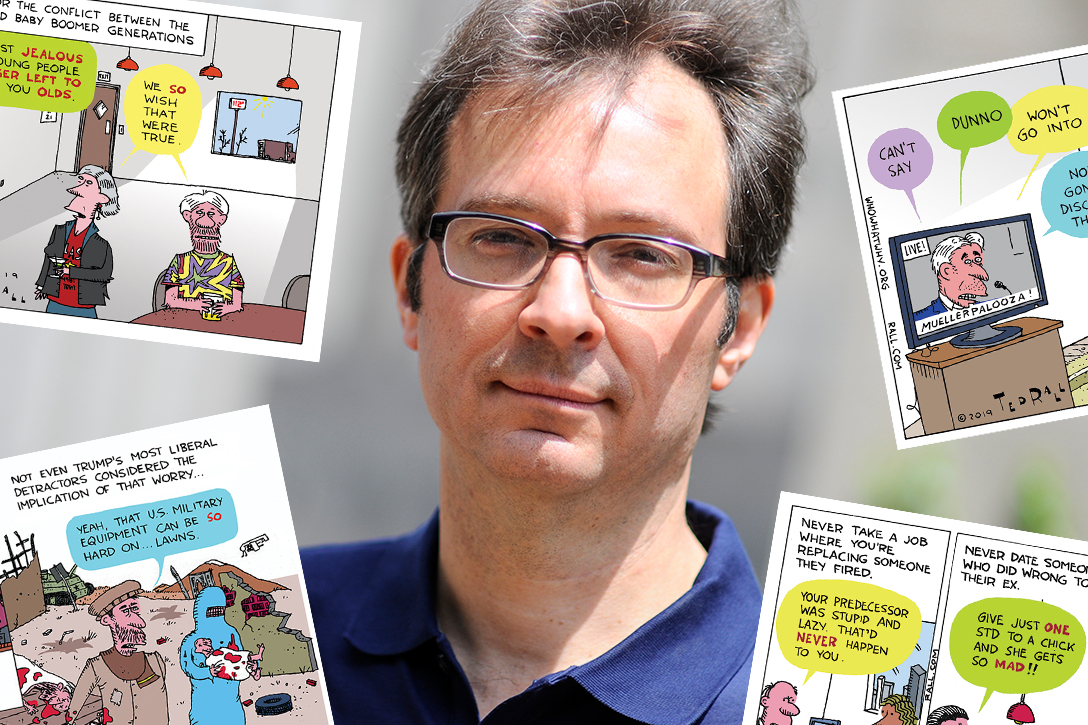 Worth a Thousand Words

Although the word “nasty” is widely thought to have its origins in the person of Thomas Nast, the most influential American political cartoonist of the 19th century, the term actually originated centuries before Nast, according to Merriam-Webster.

But the fact that people routinely associate him with the word says something about the power of the political cartoon. When it comes to challenging power and privilege, there are few weapons more powerful than sharp-edged caricature.

So how is it that a politically potent art form has collapsed in the past few years to the point where perhaps two dozen full-time cartoonists work for US papers, as against hundreds a century ago? Simple, says Ted Rall, the country’s best-known “alternative” cartoonist: It was murdered. The culprits: cost-conscious media owners and supine editors, all of whom have sacrificed journalistic integrity to the Gods of Shareholder Value.

We think Ted Rall is right, which is why we’ve hired — Ted Rall. In addition to producing editorial cartoons that appear in about 100 US newspapers, he is a columnist and graphic novelist. His work has appeared everywhere from the New York Times to MAD magazine. Among other honors, he won the Robert F. Kennedy Journalism Award in 1995 and 2000, and was a Pulitzer finalist in 1996.

Like any influential editorialist, Ted has drawn his share of flak, including lawsuits and a place in the 2005 book “100 People Who Are Screwing Up America,” a skewering of left-wing public figures by conservative Bernard Goldberg. Ted has called the citation an honor. “Not only am I grouped with many people whom I admire for their achievements and patriotism,” he told the Boston Globe, “I’m being demonized by McCarthyite thugs I despise.”

We are purposely swimming against the industry tide here. Chris Lamb, professor of journalism at Indiana University-Purdue University at Indianapolis and author of the 2004 book Drawn to Extremes: The Use and Abuse of Editorial Cartoons in the United States, says cartoonists have not been murdered but “they’ve become perhaps an endangered species, and like any endangered species they’re worth protecting.”

A key problem, says Lamb, is that cartoonists have always been tied to the newspaper industry, which is under siege by technologies that have shredded profit margins and prompted mass layoffs across the newsroom, not just the cartoonist’s desk.

“Technology has done far more harm than bean counters ever did,” he says. “It’s perhaps shocking — in a good way — that there are still so many cartoonists working either for newspapers or in syndication.” Canadian cartoonist Michael de Adder’s work was recently dropped by Brunswick News Inc. after a cartoon of his critical of President Donald Trump went viral (Brunswick says its action had nothing to do with the cartoon). De Adder told WhoWhatWhy that commercial considerations appear to be more important to newspaper owners than editorial considerations.

“Newspapers are at a loss to fix the problem of dwindling revenues,” he says. “It seems the only tool in their toolbox is to keep cutting. Editorial cartooning has suffered more than other departments in the newsrooms.”

The American political cartoon may be a limp puppet of corporate media these days, but there was a time when it wielded real power. Benjamin Franklin’s 1754 “Join, or Die” provided a potent symbol of colonial solidarity long before the revolution.

Nast helped discredit and ultimately destroy Boss Tweed and the Tammany regime in New York City — to this day synonyms for political corruption. The Washington Post’s Herbert Block, who signed his cartoons “Herblock,” coined the term “McCarthyism,” broached the heresy that maybe the US was overreacting to the communist threat, and later earned a spot on President Richard Nixon’s enemies’ list.

Cartoons represent ideas, of course, and ideas have consequences, sometimes lethal — as when 12 staffers at the satirical French weekly Charlie Hebdo were murdered by Islamists enraged over the magazine’s highly controversial Muhammad cartoons.

It says something about the power of satire that Boss Tweed was apparently more worried about Nast’s pointed caricatures than he was about critical prose. “My constituents don’t know how to read,” he supposedly said, “but they can’t help seeing them damned pictures.”

We hope lots of powerful and easily affronted people see Ted’s damned pictures. Journalism that doesn’t challenge and occasionally offend the powerful is arguably no journalism at all.