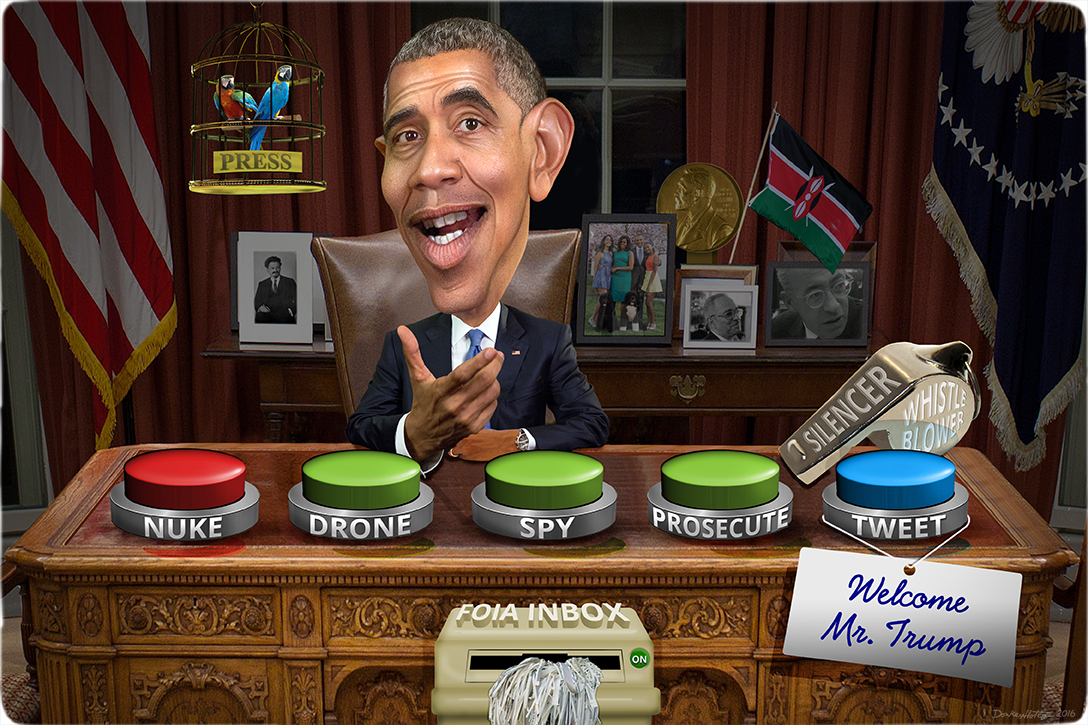 Worried What Trump Might Do? Blame Obama for Handing Him the Means!

Donald Trump’s opponents say one of the main reasons he is unfit to lead the country is that he is thin-skinned and erratic and therefore cannot be trusted anywhere near the famous (and non-existent) nuclear button. What the same people always neglect to say is that outgoing President Barack Obama is giving his successor a whole new arsenal of instruments of power to abuse.

Progressives everywhere, as well as the media, will probably shower Obama with accolades over the next couple of weeks, wistfully reminiscing about a Democrat in the White House. Meanwhile,Obama’s expansion of the use of killer-drones will likely rate no more than an afterthought.

Last July, the Director of National Intelligence released a report claiming that — from Obama’s inauguration to the end of 2015 — 473 drone strikes “outside areas of active hostilities” killed between 2,372 and 2,581 combatants, as well as between 64 and 116 non-combatants. Experts believe the stated civilian death toll is laughably low.

An updated count compiled by the British group Reprieve says 4,700 people in total have been killed by these drone strikes in Pakistan, Yemen and Somalia — pointing out that these are all countries against which the US has not declared war.

When comparing his use of drones to the 50 or so strikes that his predecessor George W. Bush authorized, it is clear that they have become Obama’s weapon of choice.

While the media has spilled a lot of ink writing about how it has been treated by the Trump campaign, much less has been said about Obama’s treatment of the press. After vowing to run the most transparent administration in history, Obama has relentlessly cracked down on whistleblowers and government employees leaking to the media.

One figure that is often cited is that Obama has used the 1917 Espionage Act to prosecute leakers more than all previous presidents combined.

A detailed analysis of Freedom of Information Act (FOIA) requests conducted by the Associated Press shows that the outgoing administration holds several dubious records, including coming up empty 129,825 times (more than one in six cases) when being asked for a document. That is an increase of 35%. The FBI came up empty in a stunning 39 percent of cases.

But the problems for journalists or ordinary citizens seeking government documents didn’t end there. The AP found that “the Obama administration censored materials it turned over or fully denied access to them in a record 596,095 cases, or 77 percent of all requests.” It must be noted that this figure includes 250,024 instances in which “the government said it couldn’t find records, a person refused to pay for copies or the government determined the request to be unreasonable or improper.”

In the White House, Obama also curtailed access via interviews and press conferences, and instead used his Office of Digital Strategy to promote and distribute canned content.

It is therefore no surprise that the US has dropped to the 41st position in the current World Press Freedom Index, a list compiled annually by Reporters Without Borders. When Obama was inaugurated in 2009 the US was 20th on the list.

In the future, Obama will no doubt be a leading voice when it comes to challenging Trump, but he will have precious little credibility in calling out the new president if Trump follows through on his various threats to curtail the media and restrict First Amendment rights.